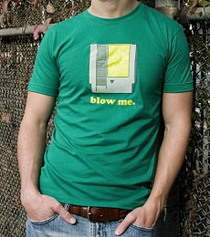 So what? I’m proud to say it. I scribbled it to fellow pictochatters right before Nintendo’s E3 2008 Press Conference. I am a Nintendo fanboi. And life is great.

I’ve always been irked that fanboyism has such a negative connotation out there in the wilderness of the Internet. It’s not that I necessarily disagree with how unique fanboyism can get: it does approach fanaticism, it does relate to loyalty, it does lead to some of the most ridiculous flame wars ever. I’ll admit that there were times in my early fanboyism where I’ve had never-ending arguments exploiting the weakest logical statements in defense of my banner.

There’s no question that feelings of rivalry and competition lay at the beginning of many fanboi identities, but fanboyism can mature into something beyond that. To be a Nintendo fan is to follow the wildest company in the industry: it’s not for the timid or weak-hearted. It means always having to redefine what a videogame is, whether you’re talking about Mario Paint or Brain Age. It means acknowledging a world that’s bigger than you: from the children who saved videogames when the NES came out, to the grown adults who seek out fun in their busy lives through games like Bejeweled, World of WarCraft, or Dr. Mario. It means that technology doesn’t expand in only one direction (faster, stronger, and more expensive) but in all directions (more accessible, more humble, and more relevant).

Some define fanbois as people who compete with other diehards to win arguments. But I define fanbois as people whose focus allows them to challenge themselves. They may know and treasure their history, but they don’t stand still. They allow themselves to grow, through life, through their games, through how they view the world around them. I’ve never believed that fanboyism should be stagnant because that way lies death: opinions that never change, games that never innovate, lives that never progress.

Others define fanbois as blindly loyal. But how can anyone hope to really learn when they don’t think for themselves? How can one really remain close-minded when Miyamoto himself says that his way of making games is not the only way? How can one know that they’re having fun with a videogame without first knowing when they’re not having fun, even if with a Nintendo game? And wouldn’t a Nintendo fan, or any videogames fan, be curious about what makes games fun for some people, even if it isn’t fun for themselves?

Finally, some also see fanbois as people who want to prove that they’ve chosen a "winning team." But my happiness is not tied in any way to the current marketshare that Nintendo has in the market. I’m not a dependent: I can take care of my own fun and happiness, thank you very much. That’s because eventually fanboyism means following more than the console… it means following the ideas behind it.

Being a Nintendo fanboi never really meant owning a SNES instead of a Geneses, an N64 instead of a PlayStation, or a Cube instead of an Xbox. It really meant following the tenets of fun, discovery, excitement, and innovation that Nintendo has always engendered and is always trying to inspire the rest of the industry with.

Just ask the NWR forumgoers: I buy third party games. When games from other sources can be just as radical, inspired, and enjoyable as Nintendo games have always shown they could be, when the rest of the industry makes good games, fun games, games for people ages 2 to 92, that’s when a Nintendo fanboi should be most proud.

We just don't know if he plays them... I'm kidding of course.

I consider myself a gamer, and not a fanboy of any kind. Nintendo does have that special spot in my heart for giving some great childhood memories with my friends back in the day.

Well, I guess it's up to you whether to call me a fanboi or a fan.

Myself, I self-identify as a fanboi, I was positively GIDDY at Nintendo's E3 2008 conference (yeah? what? So there!), and I have saved on my desktop a thesis paper that somebody wrote comparing Miyamoto's games to Japanese gardens. Personally, I'd think the fact that I comb financial statements, anecdotal sales evidence, developer commentary, and armchair analysis would put me firmly in the fanboi corner.

I suppose you're right... particularly in the "retaking" sense, since fanboy originally implied enthusiasm and not fanaticism.

The first time I heard the word fanboy was way back in Wizard magazine circa '92. Man, what a miserable bunch were we, the comic book fans of the early 90s. Rob Liefeld was so kewl....

It seems to me that you're just playing semantics to take on and/or justify a label.

I think I agree with Aaron here. At least in current definition you are more of a fan and less of a fanboy, though initial connotations of the word were not so negative. I do see what you are saying in the context of the blog though.

As far as I am concerned, being a fanboy is alright if you leave out the fanaticism and overly-defensiveness. Attaching yourself to the company and limiting yourself from seeing good elsewhere is when fanboy goes from fine to aggravating.

As far as I am concerned, being a fanboy is alright if you leave out the fanaticism and overly-defensiveness. Attaching yourself to the company and limiting yourself from seeing good elsewhere is when fanboy goes from fine to aggravating.

That's exactly it though. A fanboi should live by the tenets the company puts forward. A fanboi should adopt those philosophies in his own life. Miyamoto says his way is not the only way? Iwata says they're going after the blue ocean? Both statements should become part of the fabric of the fanbois approach to the company.

A fanboi should internalize Nintendo!

Great write up Kairon. I am a fanboi as well.I have been a bit more defensive than in the past.I will try to change my ways. To change the world I must first change myself.

I tend to regard the word "fanboy" (and I don't really care how you choose to spell it) more as meaning the fanatic type.  "Fan" has become common usage for liking something and supporting it.  It really isn't short for "fanatic" anymore.

I'm typically a fan of something because I like it.  Now Nintendo or a sports franchise or a band or whatever wants my money.  Let's not kid ourselves, most of what we're fans of is a business.  So I've always seen it as a customer-business relationship.  Both people essentially are only preoccupied with personal gain.  They get your money - you get a product you really like.  I'm a fan when I like the product and I benefit from the relationship.  If what I'm a fan of changes into something I don't like then I'm not a fan anymore.  I don't drop off instantly.  Everything can have a lull.  But if it's clear that what I'm a fan of no longer cares about pleasing me then I'll bail.  And it sucks when that happens.  No one likes when their favourite TV show jumps the shark or their favourite band starts to suck.

What I would call a fanboy is someone loyal to a level where it's almost like they're mistaking it for a personal relationship.  Unconditional love is the sort of thing you have for your child, not a company that just wants to milk you for cash.  I see fanboys as the fanatics that defend everything their source of fandom does.  Star Wars fans like the original movies and maybe the prequels.  Star Wars fanboys defend the recent Clone Wars movie.  They don't like Star Wars because it's awesome but because it's Star Wars.

Are you Nintendo's friend or their b!tch?  Fan vs. fanboy.

Ian I play games because they are fun.

To me "fanboy" means someone who's taken fandom past reason, lashing out at competitors with nonsensical or weak arguments, seeing any way except their own as a ticket to hell and ignoring any weaknesses of their own preference. Basically a fanboy is to a fan what a fundamentalist is to a believer.

Now Ian here he's a misery fanboy. Complaining that the Wii doesn't have the games he wants, sure, reasonable. Expecting Nintendo to change back to accomodate him is a bit less reasonable (after all changing away was what made them successful in first place) but ignoring the DS is just plain insanity. Hello, the thing's the most awesome system available and you're ignoring it? Lady Misery does not approve of awesome systems so her fanboys must limit themselves to also-ran consoles and complain when anyone gets a system that's not as crappy also they must feed the Mimigas.

Upon further reflection of my comments I take back the things that I said except the instigator part.Silks you don't like what Nintendo is offering fine; we have different tastes.

I don't see it like that. To me, a Star Wars fanboi wouldn't be defined by whether he disliked the Clone Wars movie or enjoyed it, but whether he or she investigated the ideas behind the movie. George Lucas does NOT make hollywood blockbusters, contrary to popular belief: he makes throwbacks to early 20th centruy science fiction series. A fanboi's interest is grounded in gaining a better comprehension of what he or she is looking at, not in hedonism.

Likewise, I believe a Nintendo fanboi would be fascinated to discover the history behind the Mii avatars that Nintendo uses on the Wii, a history that stretches back all the way to the NES. This interest isn't grounded in direct personal gain, but a genuine curiousity and fascination with the story and themes of the company, beyond its products. What caused Miyamoto to get his ideas for Zelda, or Nintendogs? How has ex-president Yamauchi affected the company's mindset even after he's left? Why were third parties kept in the dark about Wii Motion Plus, but western company AILive had a middleware app ready to sell almost as soon as the announcement was made?

It's NOT about tastes. There's a whole ream of games in the Nintendo catalog that I never caught on to. Instead, fanboyism is about a belief that the story of Nintendo, or Blizzard, or Star Wars, or whatever, will be a fascinating one to watch unfold, and worth being on the front row for.

For the record, I'm a Silks fanboi.  I freaking love that guy.

Would that make me and KDR anti-NOE fanpeople? (people for the politically correct)

Would that make me and KDR anti-NOE fanpeople? (people for the politically correct)

Yeah, the one thing I hate about the term "fanboi" is that it's not at all PC.

Yeah "fangirl" has a certain hawtness to it.

Wouldn't "fanboi" be akin to a gay fanboy? I always assumed "boi" was sort of like "grrl"...

Wait... so who was Avril Lavigne singing about in sk8erboi?

"He's such a dreamboat"

Wait... so who was Avril Lavigne singing about in sk8erboi?

I wouldn't know, I don't tend to listen to crappy music. :P