Soak it all in

Nostalgia is probably the most powerful drug you can buy. Growing up and getting older means facing the fact that nothing was ever as good as it seemed. Especially when talking about video games, rarely do games hold up to the test of time. Once the rose-tinted glasses of nostalgia are truly broken, it’s hard to return to times long past because cracks will have started to show. It’s not impossible, however. There are games that have held up the test of time where, undeniable as the cracks in the foundation are, there is always a silver lining of fun for players young and old. So let’s get this out of the way first. Spongebob SquarePants: Battle for Bikini Bottom did not need a remake. It’s a flawed, but incredibly enjoyable 3D-platformer, back when the genre was just past its peak and starting to make its way downhill for a long slumber. But from a nostalgia perspective, I was overjoyed to hear of the remake happening because it is one of those great pick up and play 3D collect-a-thons that many of us have been craving for a long time. And while yes, nostalgia does play a part in this, I’m very happy to report that “Rehydrated'' is a love letter to fans of the original game and 3D-platformers in general.

You are probably familiar with Spongebob and most of his friends. His dumb, but caring best friend Patrick Star. The sour neighbour Squidward and Sandy the kick-ass squirrel from Texas. While playing with Patrick one day, Robots created by the villainous goofball Plankton, invade Bikini Bottom and start to run wild. It's up to Spongebob, Patrick and Sandy to collect as many golden spatulas as possible, in order to enter the Chum Bucket lair and stop the robot invasion. I cannot describe the visual style of Rehydrated as anything less than: ‘It looks like how you remembered the original looking’. Comparing the two games obviously reveals how much has changed from a visual standpoint with a large focus on making all the colours pop, overhauling the visual style to make levels seem more interconnected and adding details around every corner. Even if you haven’t played the original game, Rehydrated oozes the Spongebob-style from every angle in the level and enemy design. The voice recordings from the original game have been reused and their delivery is still fantastic. Some of the writing and delivery of these lines still made me chuckle seventeen years later. Thankfully some of the sound mixing has been adjusted. Upon revisiting the original for this review, I was quickly annoyed by some of the weird mixing with Spongebob’s walking sound for example. The kinks from the original have been ironed out and the game looks and feels like a Spongebob cartoon come to life in video game form.

From a gameplay perspective, very little has changed on the surface. You still run and jump, collect shiny objects and defeat enemies by hitting them with your bubble attacks. While Spongebob’s moveset is upgraded during your adventure, many of the later levels will still require you to use all your basic tools. But at certain points you are also able to swap to the two other playable characters with their own unique moves. Patrick can throw items like watermelons and freezing fruit, which allows him to freeze water while Sandy straight up breaks the game. She has both a quick ranged attack with her lasso and can also use this lasso to hover in the air after every jump, making her the best character in the game and a joy to play. There are 100 Golden Spatulas to collect and these are your keys to unlocking new levels. Some are found in the overworld, but others can be received by completing quests for other characters like Mrs. Puff, Larry and Mr. Krabs. You can also collect Patrick’s missing socks and trade in shiny objects for more Spatulas with Mr. Krabs. Each level brings something new to the table. Being it Downtown Bikini Bottom, which introduces you to the Spongeball and Sandy’s incredible moveset, Rock Bottom, which is based around stealth and action or Sand Mountain which uses the fun sliding mechanic in a set of three different courses. 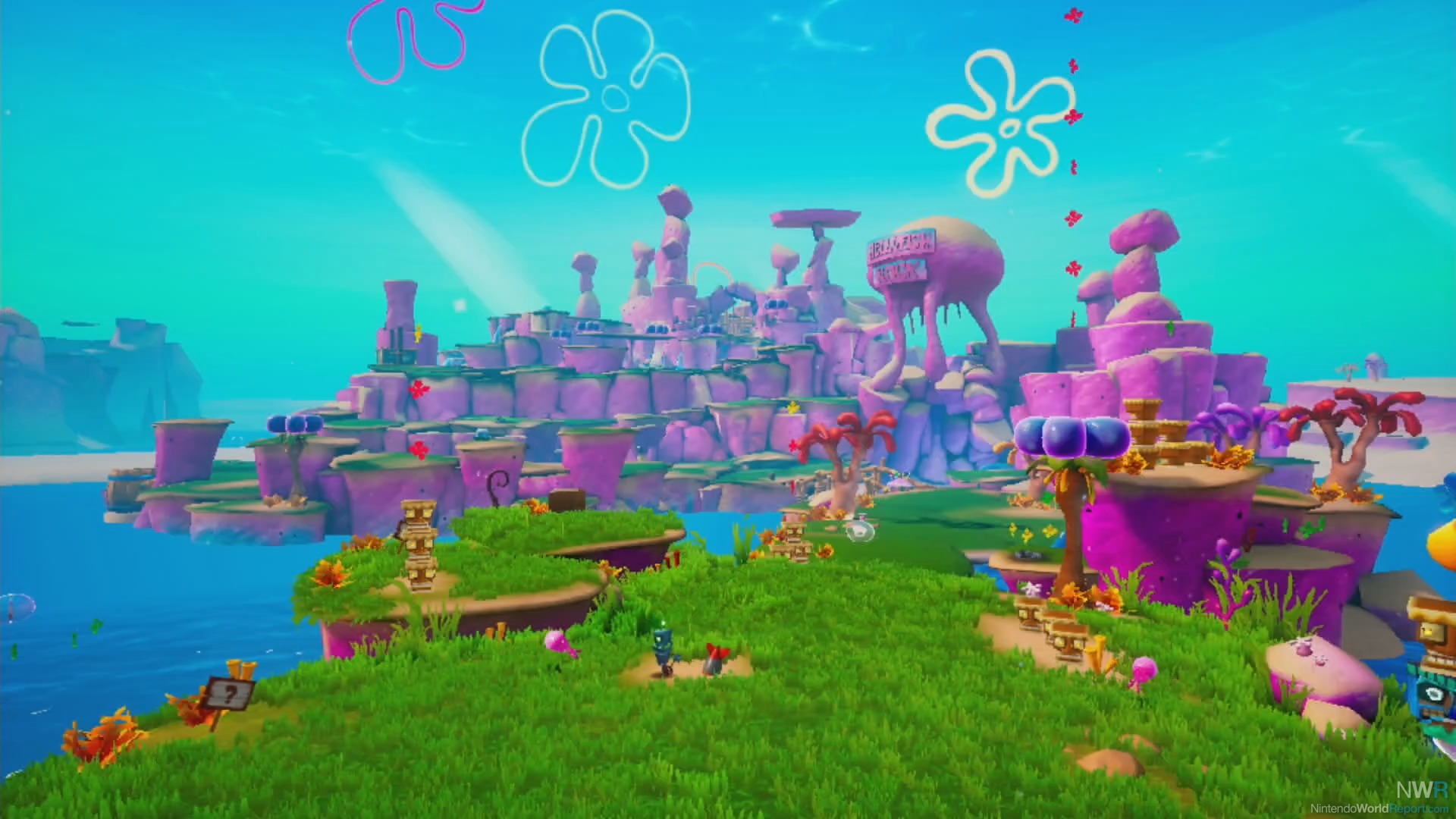 Under the hood however, many slight tweaks have been made to make the gameplay not fully represent the original game. Spongebob’s bubble spin in the original game could be used to gain a little bit of extra momentum, like the spin in the Mario Galaxy games. Here that additional function has been removed, meaning that if you miss a jump slightly, the spin attack won’t help you. It’s a small nit-pick, but this was one of the cornerstones of the pretty large speedrunning community that made Battle for Bikini Bottom a cult favourite. I’m not too sure how die-hard fans of the original will respond to this. Several other foundational flaws with the game have not been fixed. For example, you still need to access a bus-stop in order to switch characters, which feels more like a leftover of the limitations of the original, rather than a useful inclusion for new players. Especially when hunting down the final few spatulas.

The original game had some cut content that the remake has tried to ambitiously restore. Sadly, it is not worth the trouble. The robo-squidward boss fight has been added to the new multiplayer mode. Honestly, this mode is of such lower quality that it’s obvious from the start that it isn’t part of the original game. The multiplayer mode lets players choose from a lot more characters to play with like Gary the Snail, Mr. Krabs and even a robot version of Plankton. You and one other player traverse 26 islands and fight hordes of robots while slowly taking down the robotic Squidward. The experience was horrendous. The game changes to an overhead perspective and reduces a lot of the moves the characters have at their disposal. The hordes of enemies are annoying, and the repetition of the gameplay started sinking in at the fifth island. In addition, there is a terrible song that plays and does not change, and glitches are plentiful. This was paired with an abysmal online connection, where the other player experienced lag, broken animations and a camera that always focuses on the host of the game. You are not missing out on anything if you will never touch the multiplayer mode, but it’s a shame that this is where the developers clearly tried to do their own thing and failed miserably. 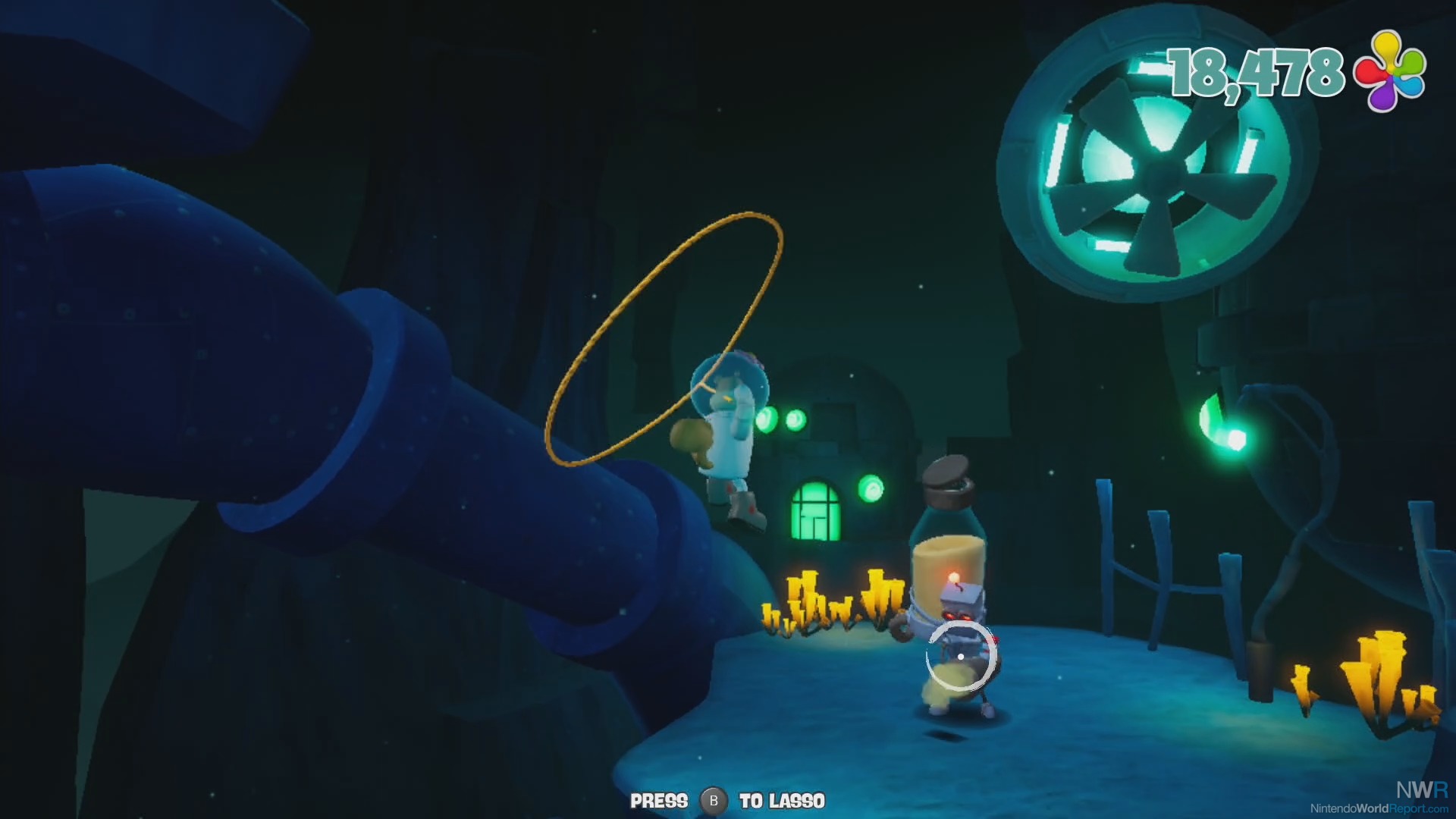 I do want to bring up the topic of performance regarding the switch version of the game. During both docked and handheld play the game is locked at 30fps, but when multiple enemies are on screen or destroyed by attacks the framerate very quickly drops. Especially on the Sand Mountain stage there was some huge slowdown in handheld mode. There are also a ton of graphical issues, like awkward pop-in, weird shadow textures on the characters and even from the original, sometimes dialogue won’t sync up properly with the on-screen text. There was a patch released during my time with the game which did fix a ton of graphical issues and animations. While the Switch version isn’t unplayable, it's clear that the beefier hardware of other platforms might be more suitable for players who aren’t looking for the benefit of handheld play. Personally, this didn’t bother me too much, since this game really is enhanced by having handheld play. Quickly playing through parts of a level and collecting one or two spatulas is a great way to spend the twenty plus hours you need to complete the game.

Like I stated at the beginning - nostalgia is a powerful drug and can obscure some of the problems that remakes like Rehydrated have. But I feel confident in saying that Battle for Bikini Bottom still retains a fun core gameplay loop that has stood the test of time. The graphical overhaul is astonishing and a joy to behold, especially for Spongebob fans. For younger players, this game is a great introduction to 3D platformers or even suitable as a replacement if they have finished games like Super Mario Odyssey. While there are issues with the performance and visuals on the Nintendo Switch, they honestly did not stop me from smiling most of the way through. It's been a long time since I’ve played a great licensed game, but Spongebob SquarePants: Battle for Bikini Bottom – Rehydrated is a joy to play. Just promise me that you’ll avoid the multiplayer mode.

Check out our graphical comparison between the original GameCube release and the switch version here!