I was immediately enamored with Captain Toad: Treasure Tracker when I brought the Wii U puzzle-box collection home in 2014. Its soft, cuddly art and well-hidden collectibles spoke directly to my heart. I had to show the first level to my sister.

“This is a baby game,” she said as the non-confrontational Captain Toad waddled his way through the level. “You bought a game for babies.” 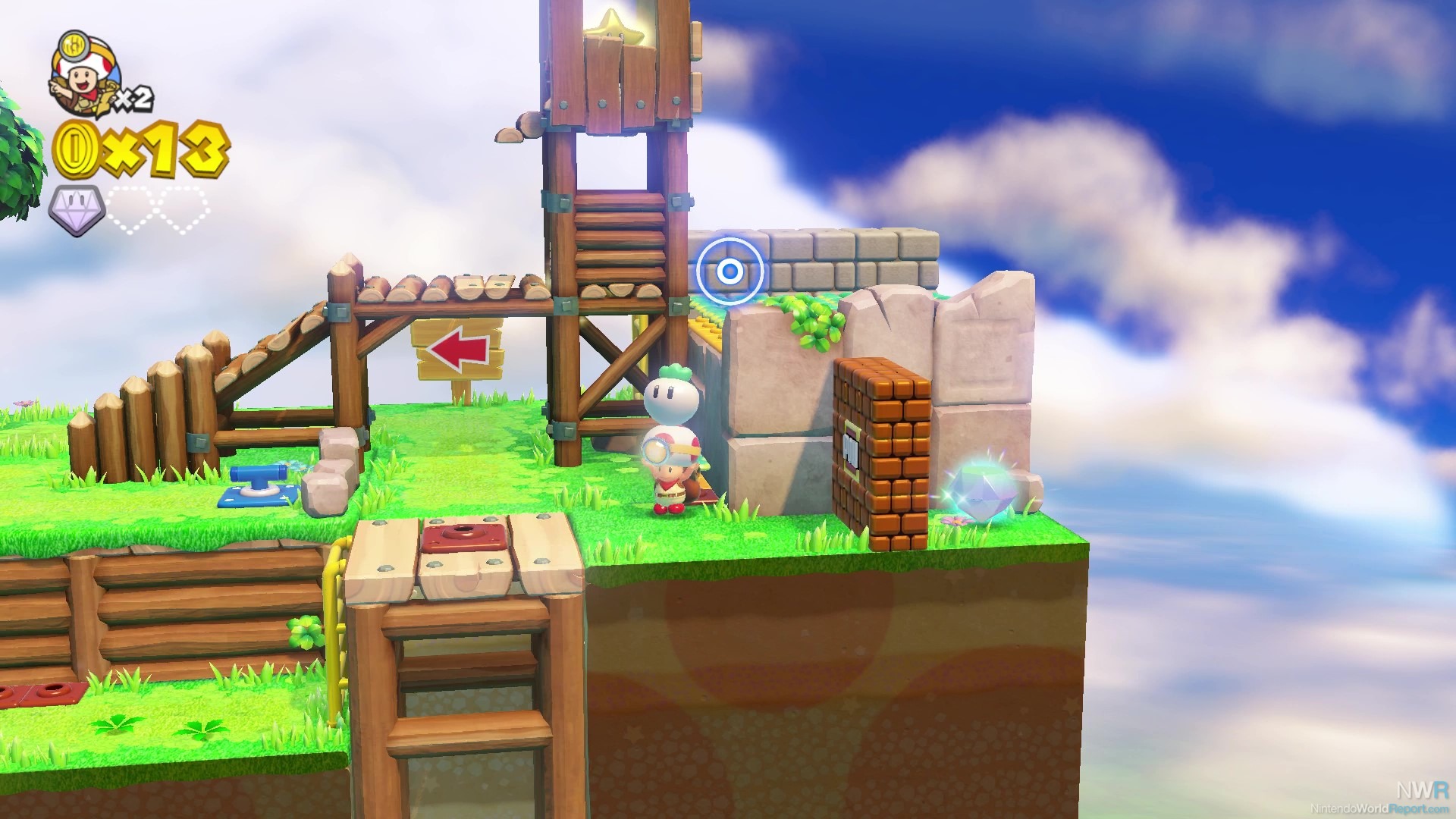 Captain Toad probably could be beaten by a baby, or at least a very small child, I thought to myself as I worked my way through the 18 dioramas separating Toad from his traveling companion, Toadette. Each level showcased an entirely unique locale and puzzle-set -- one moment Toad was turning massive sections of a haunted house, the next scaling the inside of a volcano while being chased by a dragon. Gold coins shimmered in the light while Toad slipped through the jungle and behind Shy Guys. The world was beautiful and alive, each level a handcrafted work of art I'd gladly display on my shelf.

An hour in, the credits rolled. Then Toad got captured by a giant bird, leaving Toadette to save him.

“This is a baby game,” I remembered as Toadette fell off cliffs and shared tight quarters with watchful enemies. She traversed similar levels to Toad’s -- a train barreling through the night, ruins beneath a lake -- but each still unique. My lives counter plummeted. Toad's chapter was a baby game hiding a brutal montage of Toadette's skull zooming on screen. I was being tortured for completing the tutorial. The three diamonds hidden in each level grew ever harder to collect, and the bonus challenge revealed after beating each stage required real thought. 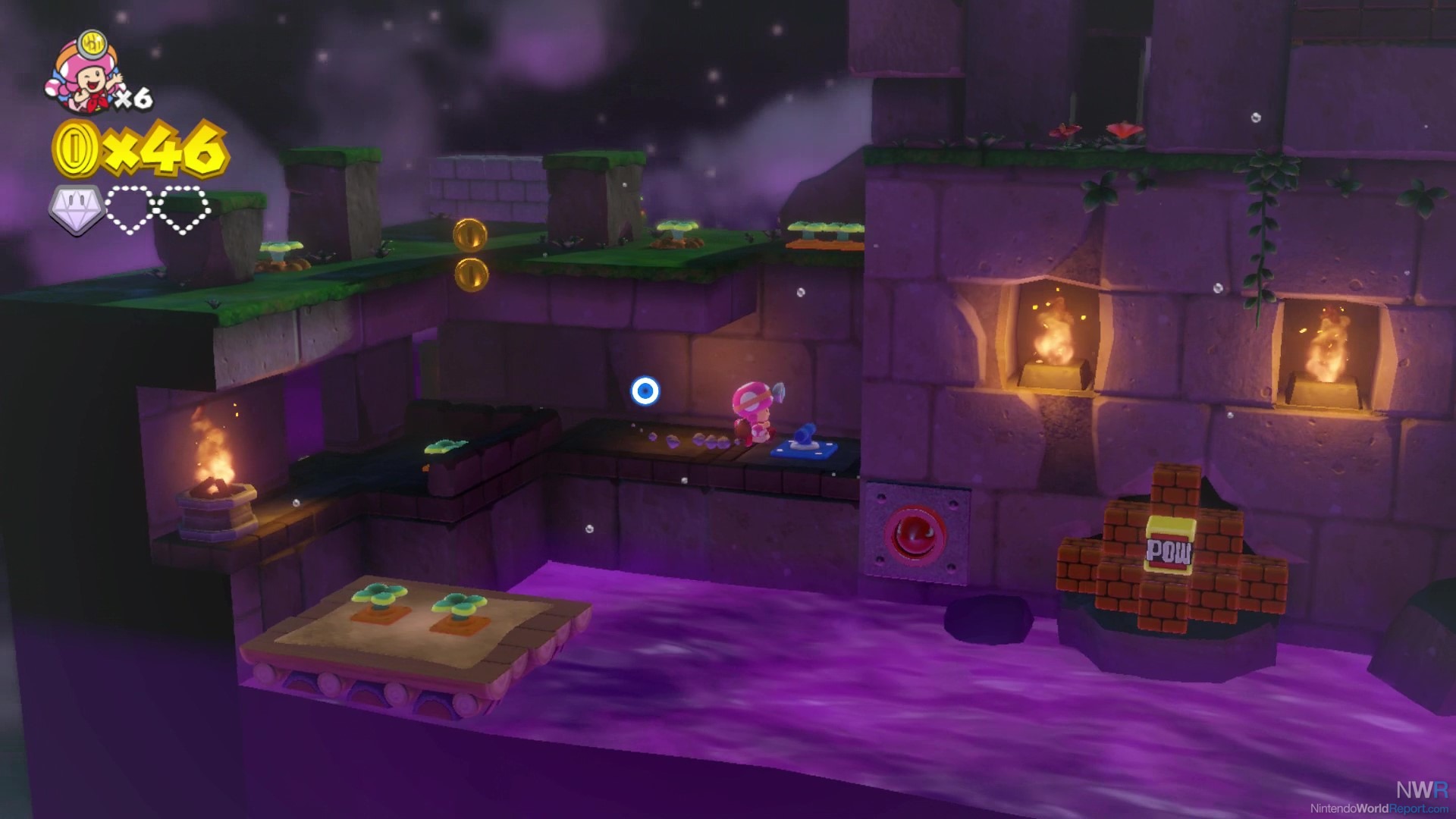 Toad and Toadette reunited for a moment, but the giant bird split them up again. While charming, Captain Toad’s repeating plot points made me ponder the futility of trying to maintain any sort of relationship in such a tumultuous world.

“What is life,” I thought as Toad made a stupid noise and chased after Toadette. “Why are we all here?”

We're here for puzzles. Captain Toad's puzzles (of which there are secretly over 70) are guided by such a beautiful combination of logic and detail that solutions seem placed in the player's head by magic. Everything continuously clicks organically with the perfect splash of reflex-testing action. Somehow, level themes and designs continue to surprise up until the end. Very few levels are duds, but some suffered from the move to Switch.

The rail-shooter minecart levels feel out of place without the Wii U Gamepad. They offer no motion controls docked, forcing me to pick up my Switch and swing it around to aim. A few levels had slowdown docked. Little things kept adding up to make the experience feel wrong on a TV. 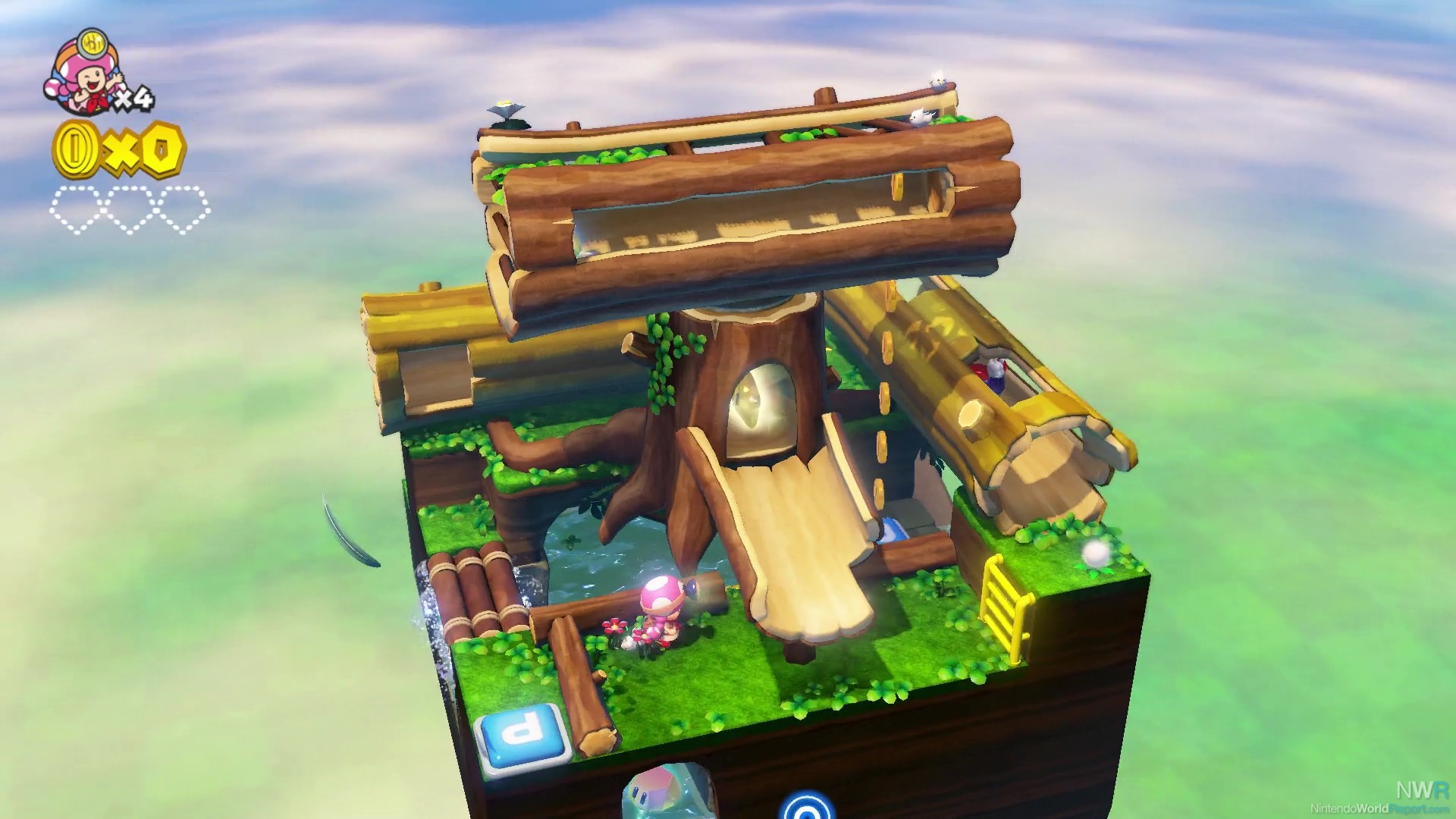 The Switch version places an obnoxious blue reticle right in the center of the screen while docked. Tilting the controller moves the reticle, and a press of ZR replaces tapping on the screen. In later levels, I found myself using my right thumb to control the camera, my right index finger to hold the run button and tap the grab button, my right middle finger to press ZR, and my left thumb to move Toad all while aiming with motion controls. Why so many controls had to be mapped to the right side of the controller in a game so reliant on camera movement is beyond me.

And yes, Captain Toad on Switch replaces four boring bonus levels ripped straight from Super Mario 3D World with Super Mario Odyssey-themed levels. The Odyssey levels are some of the best in the game. I don’t miss the 3D World levels. With Pixel Toad hide-and-seek no longer tied to an amiibo, the Switch version more than makes up for its shortcomings.

Captain Toad is a cute little dude, but he is no baby. His quest full of danger and discovery can be enjoyed by anyone in search of a few dozen great puzzles. Not much has changed here, but that includes Captain Toad: Treasure Tracker being a must-play.

How does this version handle the Microphone stuff?