The whole experience is more WHAAAH than BWAAAH to be honest!

When I heard that Super Mario and the Rabbids would team up for a video game, I wasn't really sure how to feel. There were moments where I enjoyed the outings of these white critters, but it was really down to content and context. Rabbids Go Home was their finest offering while the minigame collections were all over the place. In 2017, I didn't think about them much until E3. It is here that Mario + Rabbids Kingdom Battle was officially revealed and I got intrigued by the idea. Strategy games are always a genre I enjoyed, so I was hopeful that Ubisoft Milan and Paris could deliver something fun. And they most definitely succeeded.

The experience starts with the story. A girl has made a revolutionary device that can mix together two objects. Together with her virtual assistant Beep-0, she is still trying to finalize these SupaMerge glasses. The glasses seem to have an overheating problem, which in turn made her call it quits early. This is where the Rabbids fly in and start messing with the room. The girl is a big Super Mario fan, which results in the glasses ultimately transporting the Rabbids to the Mushroom Kingdom. Beep-0 becomes a character who can roam around and quickly comes across Mario (and two themed Rabbids) for one of his wackiest adventures yet. 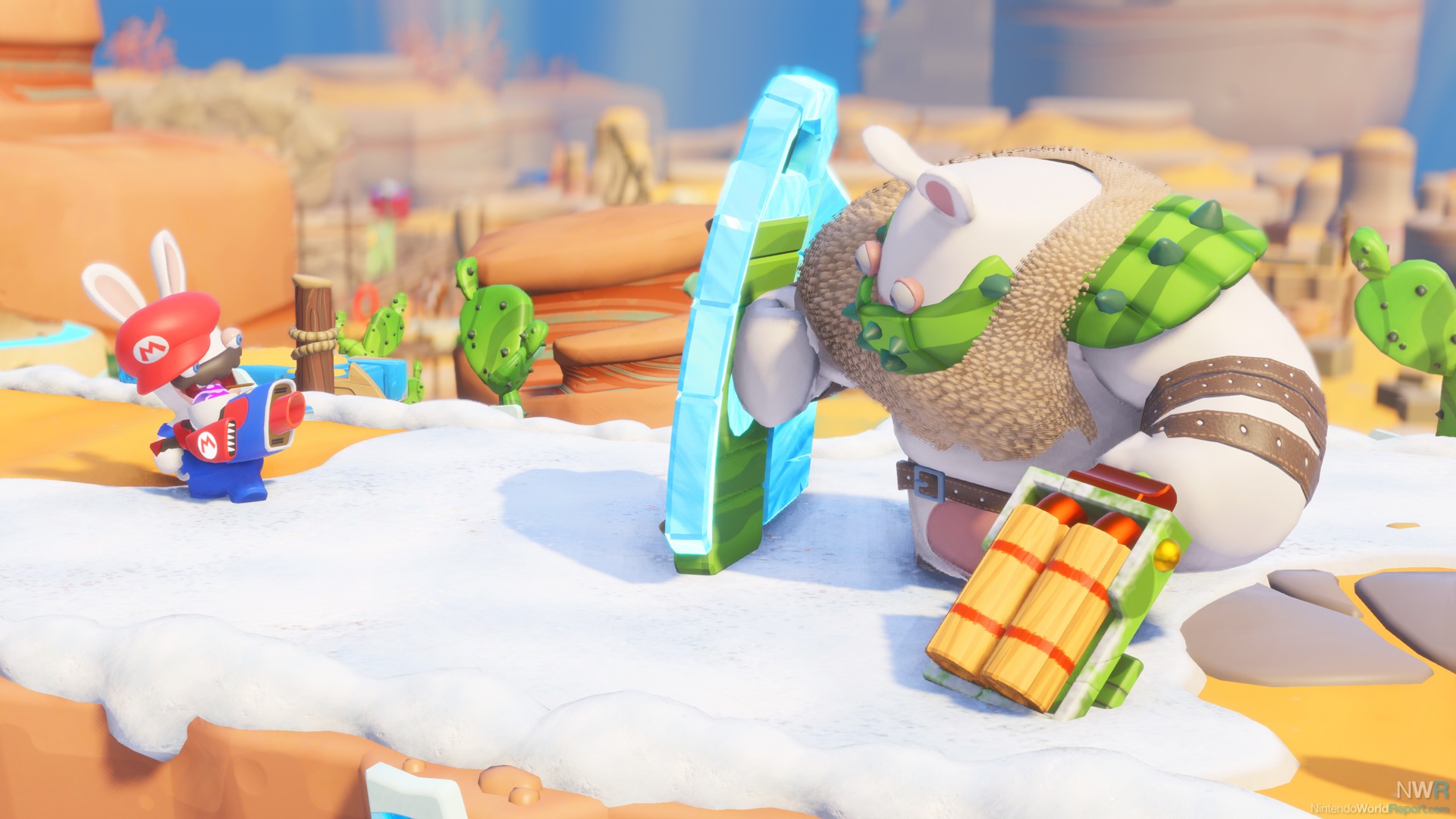 And yes, the Mushroom Kingdom created by Rabbids' mayhem can only be described as twisted. The new world retains the color, but includes situations that can only come from the warped minds of Rabbids. From gigantic toilets to pinballs rolling through the desert, there is always something fun to look at. Most of the unspoken dialogue throughout comes from the NPCs and Beep-0, but they add to the proceedings. The level names are filled with clever puns, while the writing makes good banter possible. Beep-0 seems to always blame the Rabbids, add layers to silly Mario lore or just furthers the plot. You can't ask for a better sidekick than that.

That being said, a game's foundation is build on its gameplay principles. Mario + Rabbids Kingdom Battle has four worlds with nine levels each to get through. Every level contains exploration bits and various strategy battles to win. During the exploration portions, you take control of Beep-0 with the other characters following behind him. It is here that you start looking for hidden treasure, new passageways, interactions with the environment and much more. There are some simple puzzles to complete, which are mostly required to progress. I found them quite fun, even if they aren't hard to wrap your head around. They provide moments to relax, unwind and smile a lot before your next set of encounters. I found it personally fun to stop for a bit and look for smaller details in the world around me.

While those moments give you breathing room, the strategy gameplay is no joke. In fact, this is some of the most profound gameplay found in the genre. It starts with the movement controls, which sees you moving Beep-0 around to determine a location. The character will follow Beep-0’s path and park behind cover when needed. There are lot of variables to think about when deciding a route. All the characters are able to do a slide move that does damage to their opponent. Next to that, their position will influence the ability to use certain special moves, which can be needed to get out of nasty situations. It is these little nuances that matter to overcome an opponent. 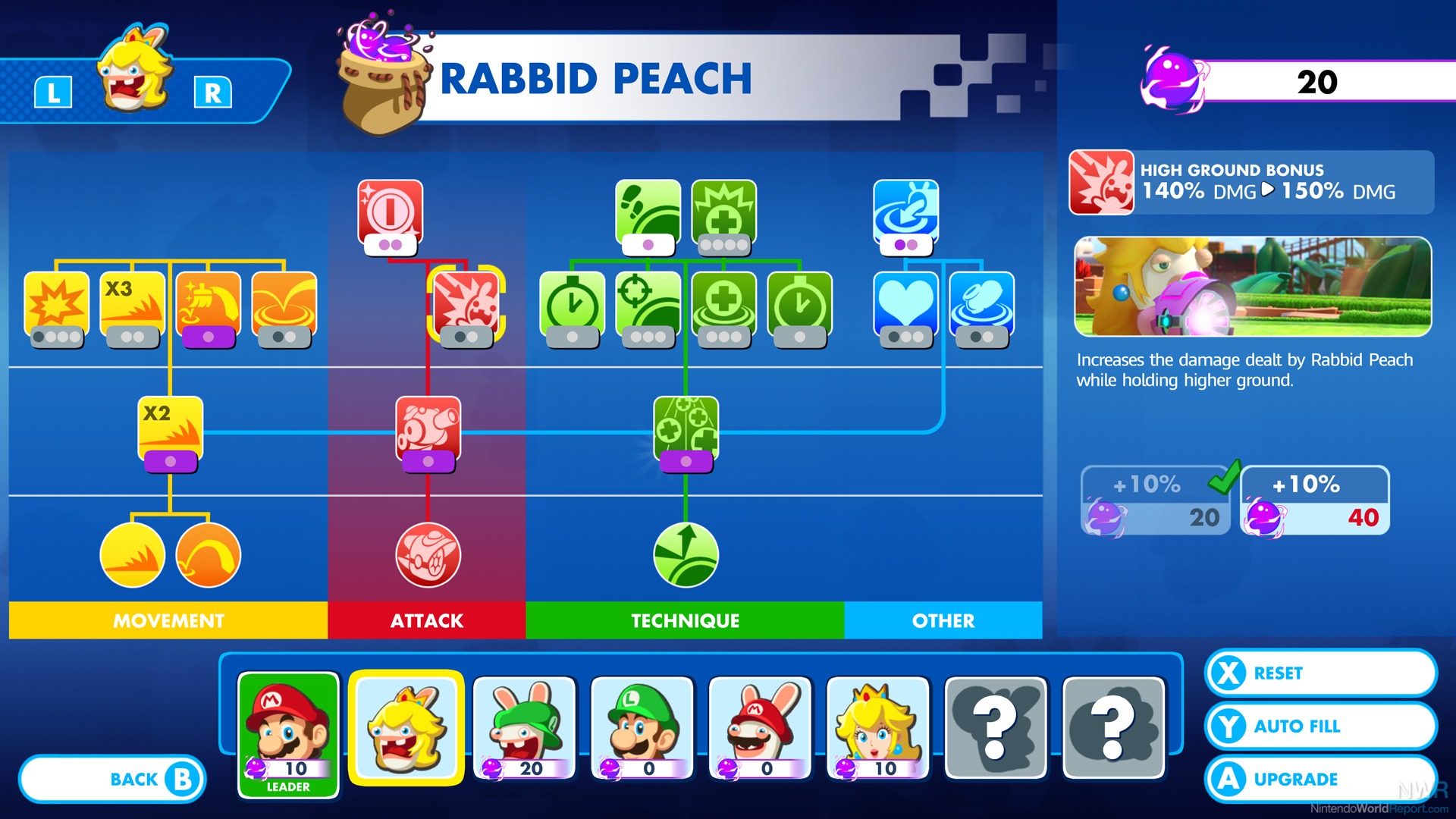 Your available attacks are equally as important. The characters wield fantastical weapons that can aid them in the heat of the battle. Mario's main weapon isn't just powerful, but it is also capable of firing honey shots. This sticky goo will stop enemies in their tracks and make them incapable of moving. Mario + Rabbids also have defensive moves at hand to make the road ahead tolerable. The Rabbid characters will have shields early on, while Mario has the ability to shoot at an opponent that moves in his line of sight. Rabbid Peach can restore the health of anybody who is close, which is something you need as soon as possible. As you move along your adventure, new options will open up for you. New weapons and characters are introduced on a regular basis, which means no two battles are the same. Every character also has a skill tree, which adds the secondary weapons and abilities to each of the party members. There is a lot to tinker around with for every character.

The variety of opponents that you will be facing is staggering. It is mostly Rabbids that are corrupted by SupaMerge, but that doesn't mean that they are dull to look at. Each new area comes with unique specimens that have a different way of moving about, attacking and making usage of secondary abilities. Early on, they will be straightforward baddies that are easy to avoid. From the second world onward, they stop pulling punches. Their focus on unexpected maneuvers will keep you on your toes. The bosses, however, are the real stars of the show. Unlike the usual Mario fare, they are epic encounters of skill and wit. The first boss sees you fighting a Donkey Kong themed Rabbid. You will have to make bananas disappear so that you can attack him. It is riskier than it sounds, but spoiling the steps would ruin the enjoyment.

The battle system may look intimidating, but it’s easy to grasp. I feel that the game is always fair and there is always a clear solution to a problem. The difficulty can be adjusted on the fly if the battles are tough. This doesn't change the opponents a lot, but you will get more health to finish the job. If you still happen to fail on a battle, Mario + Rabbids has a quick restart option to start over fresh with no penalty. The quick restart allows for a lot of experimentation before committing to the battle. 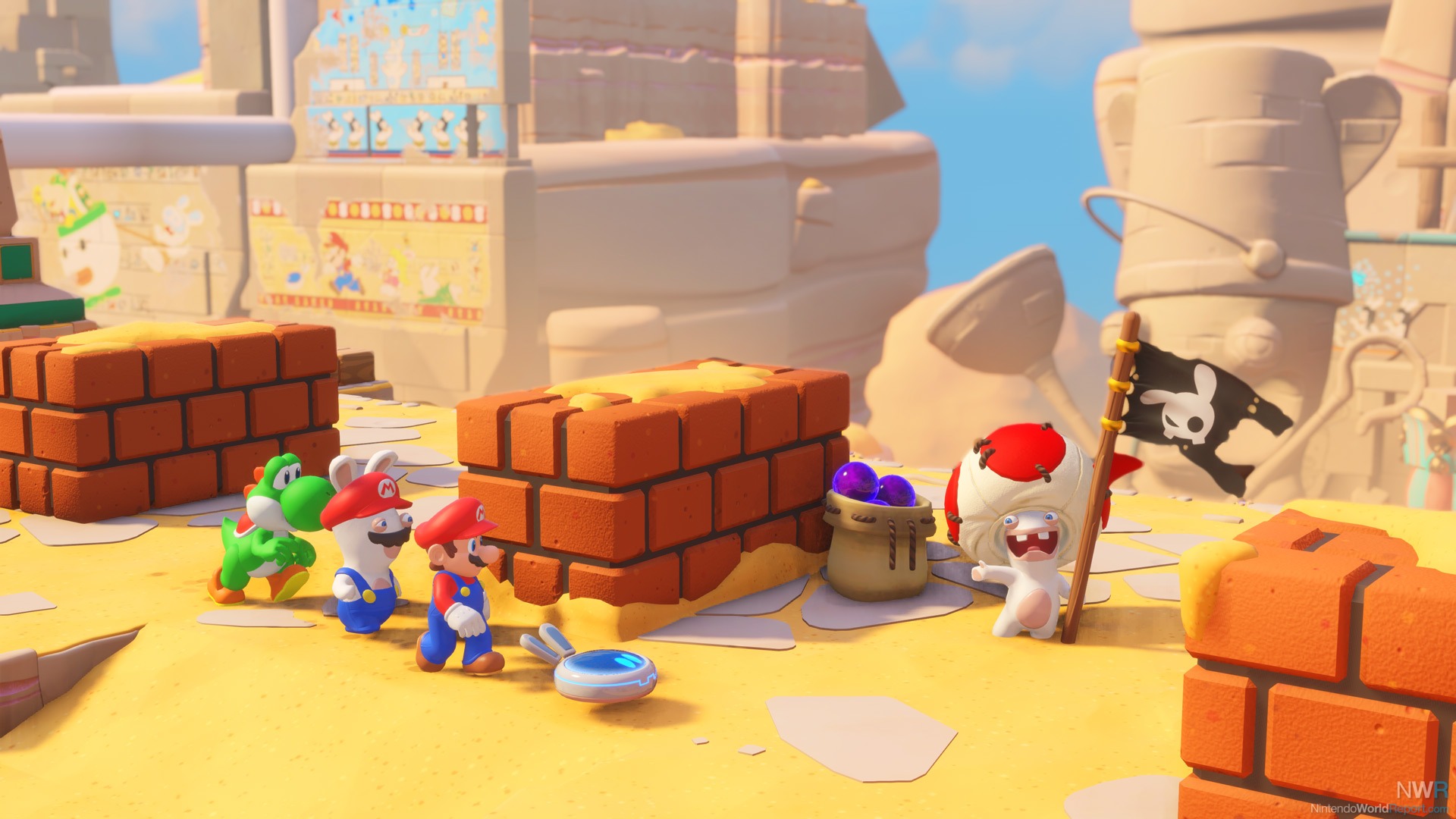 Mario + Rabbids does reward those that can solve the battles quickly, though. If you can complete a battle within a set number of turns and keep your characters intact, there will be a gold level statue waiting for you. You will be rewarded with more coins, which can be used on various weapons to enhance your team. Mario + Rabbids encourages you go to back to old levels and worlds to find new trinkets to explore. With the Washing Machine, you can go back in time and try to better your final score. This might not be the easiest thing to do, but at least you will get to see the funniest moments again as well.

Within the world itself, you will find various challenges after completing it. These challenges will give you more difficult battles with harsher requirements. The first one involves trying to defeat fourteen opponents in just three turns. Another one sees you escorting a Toad to a specific point on the map, which becomes insanity towards the end of the skirmish. Every world has also a secret chapter, which will present meatier challenges than the ones found in the main levels. It is here that the game will push you to the limit in true tests of skill and gives you hours of additional fun. The extra maps really make Mario + Rabbids one of the meatier experiences on the Switch.

Next to all of this single-player content, Kingdom Battle also offers a truly great multiplayer mode. You and a friend will be split into teams that each control two characters. The goal is to complete various challenges that are specifically built for multiplayer. The maps are larger, but the core goals are similar to single player. While it is more meant as a co-op experience, I found myself getting rather competitive. We tried to defeat the most enemies possible or only make usage of certain abilities to get the job done. Either way, it adds even more value to an already grand package.

As far as the presentation for Mario + Rabbids Kingdom Battle is concerned, you shouldn't be surprised by how incredible it looks. The colorful world of the Mushroom Kingdom is beautiful to look at and feels made for the Nintendo Switch. It doesn't matter if you are playing in handheld or television mode, because this game looks great no matter what. I do have to mention that the Switch became a bit hot in handheld mode, and that the performance slowed down somewhat. Considering the nature of the game, the drops certainly weren't terrible, but they are still very much present. Back on the positive side, the soundtrack is fantastic. The music gives off the right amount of energy and brings that adventurous vibe that I adore. The tune around Peach's Castle made me especially happy as the arrangement was really well thought through.

Despite hiccups in handheld mode, Mario + Rabbids Kingdom Battle was more than I hoped it would be. It’s one of those rare instances where the positive pre-release reception was totally justified and made the ultimate pay-off even better. The developers at Ubisoft Milan and Paris took their time to figure what works about strategy games and elevated it to a form that can be enjoyed by many. Add to that the pure cleverness of the adventure, and what results in an absolute must play for Nintendo Switch owners. This is the best game the Rabbids have starred in and they only needed Mario to achieve it.