Sonic comes to Game Boy Advance in a big way. Read the full review inside.

Even though I’ve never had much experience with the Sonic games, I was looking forward to Sonic Advance from the day it was announced. It’s turned out to be one of the best GBA purchases I’ve made so far.

The level design is an unusual balance between speed and frustration. You will often find yourself blasting through a stage only to run into a wall of spikes or off the edge of a cliff. The levels are huge with multiple paths that leave plenty of room for replay value and exploration. It’s basic platform stuff. Go through a couple stages and fight a boss, collecting as many rings along the way as you can. If I have any complaint with the main game, it’s that the final boss is ridiculously easy compared to the ones in previous stages.

Control is accurate in most cases, but a couple of moves feel tacked on. For instance, the mid-air dash can only be performed if your character was standing still when you jumped. I don’t think I have to tell you that it is rare for you to spend any time standing still, making it practically useless. Also, Sonic can grind rails, but the timing has to be just right. Either you grind at the very top of the rail or you don’t grind at all. That combined with the general lack of rails in the game really disappointed me since I was hoping to grind more often.

You can choose one of four different characters right from the start. Sonic is average, without many distinct abilities besides being able to grind on rails. Tails can fly and attack enemies with his tails and is able to go just about anywhere which makes him the perfect candidate for finding bonus stages. Knuckles can glide short distances and climb walls.

Then there’s Amy. Amy’s main flaw is that she can’t roll up and gain speed like the others. This leaves her at a distinct disadvantage because she has to constantly back up to gain enough momentum to make it over some ramps. She has a good lineup of attacks, but I think the main problem is that her abilities just don’t mesh well with the level design.

Also, hidden in every set of stages is a special bonus stage. Honestly, I feel like this is the worst aspect of the game. Each stage has you sky-surfing down a tunnel collecting rings. The stages use the GBA’s sprite scaling effects to simulate 3-D, but fail terribly at this. It takes quite a bit of time (hours for me) to get a good feel for where the rings are supposed to be in 3-D space. There are also orange "hoops" that you’re supposed to perform stunts in, but because the instructions don’t explain the stunt aspect, I was left wondering what they were for until I discovered it on accident.

Sonic Advance also has a good set of multi-player games that TYP and I got to try out a few weeks ago. Single-pak play is simply a game of collecting the rings. Two to four players try to get the most rings and knock out their opponents’ rings. There are also two multi-pak games. The first is a race to the finish challenge which usually goes to the player most familiar with the stage. The other (which is my favorite) is the Chao Hunt. There are special stages set up with Chao hidden in them. Your goal is to find the Chao or to steal them from your opponent. Whoever has the most Chao when the time runs out wins. Since there are a limited number of Chao, it tends to be a lot more competitive than collecting rings. We didn’t get the chance to play any four-player matches, but apparently there are also team modes where team members can use their special moves to help each other. For example, Knuckles and Tails can carry their teammates as they fly.

Finally, the Tiny Chao Garden is included for a vastly different style of entertainment. I’ve fluctuated from misunderstanding, to addiction, to boredom with this odd mini-game that’s made its way into the Sonic universe. It can be fun for a while, but really it has more value as part of the GameCube game than as a game in itself.

There’s nothing to complain about here, but nothing is groundbreaking either. The characters are all well animated. Multiple layered backgrounds increase the sense of speed, and everything is easy to see on the small screen.

The sound effects perfectly match the feel of past Sonic games, and the music fits the game well. However, once I put headphones on I noticed that the instrument samples really don’t match up to a lot of the offerings we’ve heard on GBA. Sure it’s picky, but what do you expect from a guy who used to work in radio.

Control is tight throughout most of the game, but some moves just don’t fit in well. It also seems that the interaction between characters and sloped surfaces feels like you’re wearing roller-skates which can be frustrating at times.

It’s fast and fun throughout most of the game. I would have given it a better score here if it weren’t for the nasty bonus stages. Really, whatever you get for collecting all the chaos emeralds, I can hardly see it being worth completing all the bonus stages for.

The stages are all huge with a lot of multiple paths to take and exploration to embark on. Let’s face it, with Sonic it’s just fun trying to get through as fast as possible and with as many rings as possible. Including multi-player adds even further replay value if you can get some friends to buy the game – and really they should.

Sonic Advance has been the focus of much of my play time lately, even keeping me away from the GameCube for a few weeks. It has a lot of appeal and replay value that fans of the series and newbies can both enjoy. Plus, there is a great set of options, including language and button selections and a full sound test. It’s a complete package that anyone with a GBA should check out. 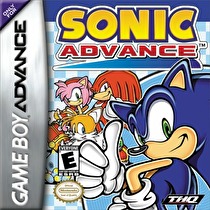