This is the Wii U game you've been waiting for!

Super Mario 3D World has quite a tall order to fill. Not only is the Wii U in a tight spot, but it also looks to be the last major title the system will be seeing for quite some time. Not to mention the fact that it’s attempting to fill the rather large shoes of Super Mario 3D Land. Make no mistake; a lot is riding on the success of 3D World. 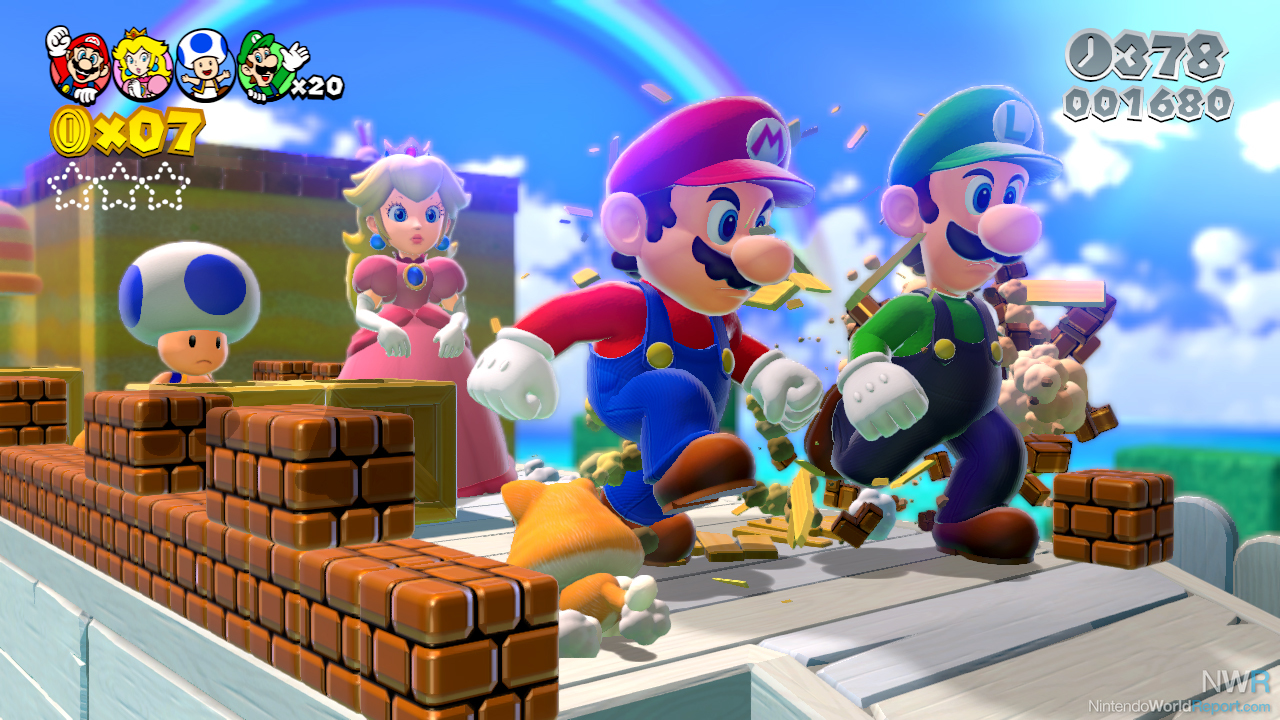 As the game opens, we’re treated to a very brief plot involving, you guessed it, Bowser and the capture of a group of Sprixies who have inexplicably popped up from a clear pipe. After that, the game throws you right into the world, no tutorials, and no handholding. Just Cat Suits and mayhem!

My initial experience was with three other players, meaning we had a full cast of characters running about. After my experience with previous four-player 2D Mario games, I was a little apprehensive, but the 3D plane really does make all the difference. If one player got too far separated from the group they were teleported forward, similar to previous titles, but the game allows for a decent amount of distance between players.

This means four characters can be pursuing four different goals simultaneously, within limits. Playing with four players is some of the most chaotic fun I’ve had with a game in a long time, and make no mistake, the chaos is part of the fun. Combining this with the drop-in/drop-out method of multiplayer creates an environment that is simply irresistible. I would constantly find myself fatigued from long multiplayer sessions, drop out, and then poke around on the GamePad to help out remaining players until I felt like hopping back into the action. 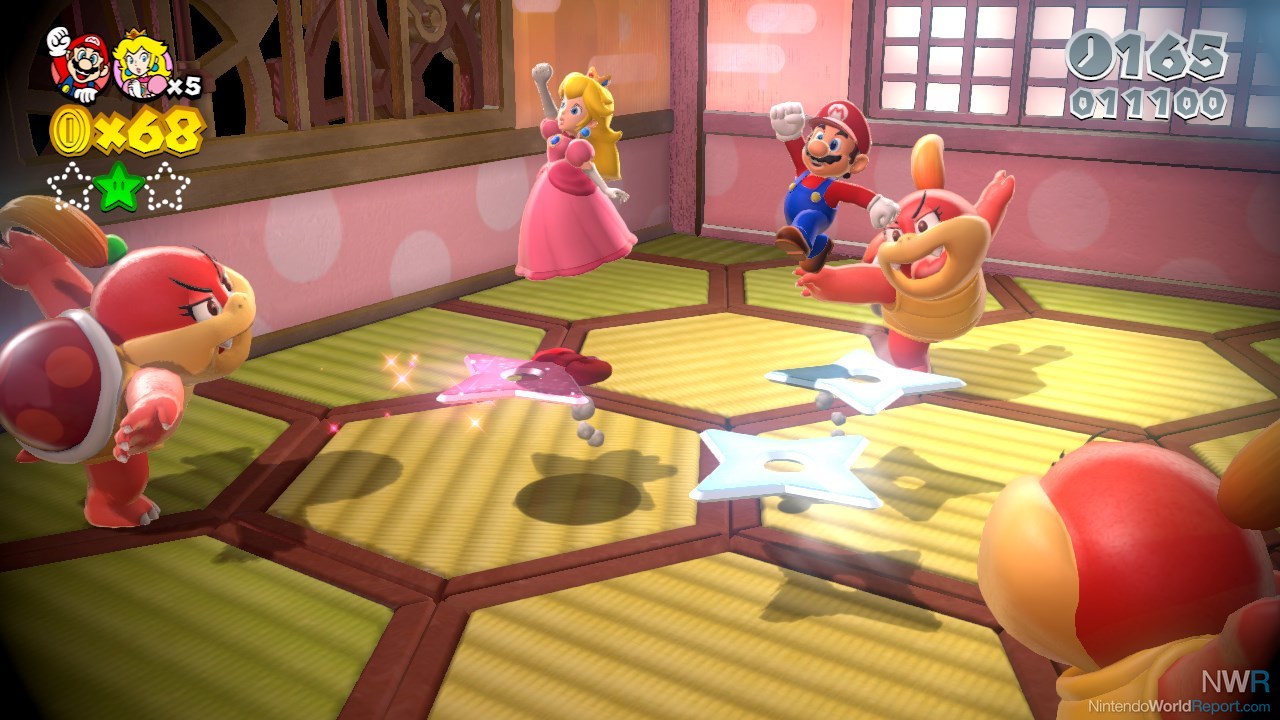 Non-gamers were even able to take part in the fun by simply playing with the GamePad and no character selected. This allows a play style similar to Boost Mode on New Super Mario Bros. U, but without the platform-generating ability. Every level is packed with items and enemies that can be interacted with by a single player using the GamePad, or a second player looking for a slightly less intense experience than playing the game proper. From blowing tiny Goombas out of the way to tapping question blocks, even the meekest of gamers can find something to do.

With any number of players, the game provides a treasure trove of content and heaps power-ups on players with regularity. Nintendo seems to have realized that Mario and his crew are at their most enjoyable when showered in items. Lots of old power-ups make appearances, and the new Cat Suit is an enjoyable addition. More elusive items like the Double Cherry and Kuribo Skate are also a blast in the levels that feature them.

The levels themselves constantly provide new ways to play and force you to constantly be thinking about which items you want to tackle a level with. Sometimes choosing the wrong power-up means you won’t be able to collect all the Green Stars, which are used to unlock some levels. This also means you’ll be revisiting some levels over and over again in an effort to grab the stars and stamps, but constantly branching paths mean that you’ll always have an alternative when a specific level grows stale. Each level offers wildly different experiences, and the sheer wealth of content is enough to slake the thirst of even the most ravenous Mario fans. 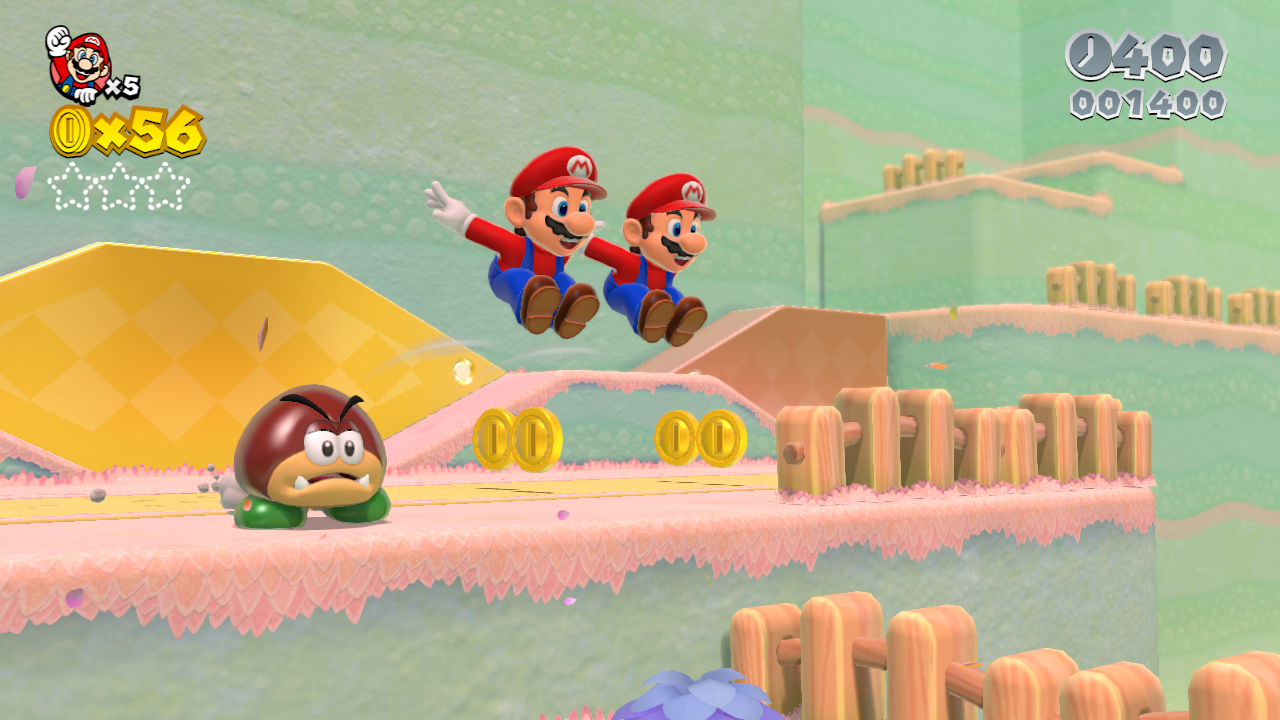 There are two new types of levels added to the mix: Mystery Houses and Captain Toad Levels. Mystery Houses provide as many as 10 mini-challenges in which you’re teleported into a room to solve a puzzle and reveal a Green Star within 10 seconds before being sent to the next room. The breakneck pace makes for some really tense moments, and they’re a welcome addition. Captain Toad Levels are slower paced endeavors in which you rotate a very small map on the GamePad and guide the defenseless Captain Toad through a series of puzzles to find all the Green Stars hidden about. They tend to be a bit more methodical, and provide a fun challenge in their own right.

From start to finish, I didn’t once become bored with the game; the constantly changing gameplay made sure of that. The overworld, which offers rewards for exploration itself, is filled with bonus stages and mushroom houses as well as the elusive gold Bowser Train. Slot machine style bonus houses also return, and Mushroom Houses once again have an element of chance to them. Every level can be experienced differently by adding a GamePad player, or traditional co-op players, and most of the time you’ll uncover something new with every mode of play.

On top of this wealth of content is the gorgeous HD shine Nintendo has added to the game. While visuals on the non-HD GamePad look decent, seeing the game in motion on an HD TV is a real treat. Every koopa shell has a wonderful sheen and each and every happy, bouncing shrub on the overworld is rendered in high resolution. In short, it looks amazing. Stack the phenomenal music on top and you’ve got a package that could wow any Nintendo fan with graphics and soundtrack alone. Some of the tunes are a little more traditional than others, but I found myself replaying some of the jazzier levels just to listen to the music again. 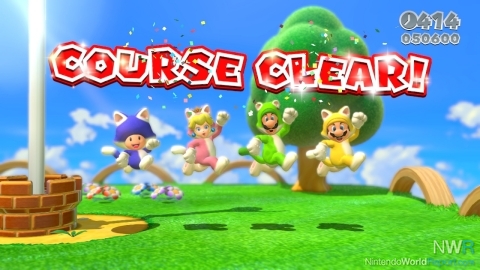 Thankfully 3D World isn’t just a refinement of the Mario formula, it’s a powerful re-imagining. It’s an explosive cavalcade of color and excitement as well as a well thought out evolution of Mario. The plot even deviates (although not too wildly) from what you might expect in a Mario game, giving you some silly surprises amidst the parade of unlockable content. This is one Mario game you’ll want to play well after the credits roll and might just be the killer app of the Wii U. Not since Super Mario World have I been so in love with a Mario game.

I still wish Nintendo would add Online play for these games. I would myself would love to play this game with a friend who moved away. To bad

Wii remotes controlled perfectly fine, in fact I often found myself using the D-pad on the GamePad instead of the stick. So, no, the 3D controls were not any more or less difficult with just a D-pad. Your daughter may also like playing with just the GamePad and no character selected, which allows her to interact with the game by just touching things in the level. It's surprisingly fun, and is currently my girlfriend's favorite way to play.


And, while I didn't test it, the game says that nunchuks are supported.

Excellent! Thanks for the replies folks. My daughter and I have beaten both NSMBU and NSLU together in coop. This will be her first 3D Mario game and I wanted to make sure she wasn't gonna be hampered by the controls. As far as GamePad screen only support, I was usually the one who did that while my daughter played as Mario. She didn't have the patience or intuitiveness to help me while I played and it was a challenging game in its own right for me to just keep her alive while she played and I used the GamePad. So I don't think that's going to appeal to her, but when she wants to play on her own save, I'll certainly be using it again!

Love it awesome review.  Can't wait for this and my all new zelda 3ds xl on friday.

Another masterpiece from the developers at Nintendo Enterainment & Analysis Department Tokyo.  They truly know how to surprise everyone on a global scale... not only the graphics in HD (scaled to full HD), at 60 frames per second... but also as asymmetric 4-player co-op and the overall fun.  This Friday, I'll be ready for the Big N to take my cash and buy Super Mario 3D World!

Mario is this game?!.. Oh, the humanity! Horrible spoilers!

Can't wait to play this game. Both alone and with friends. Too bad about european delay though.

The first few levels didn't grab me like Galaxy 2's did but now I'm in World 3, playing alone and eating it up. The music is just so nice, it makes me emotional for some reason... Like a crying tears of joy emotional. Yeah something is wrong with me.

Toad is just too cute in his cat suit! And Peach has some nice hips in the Tanookie get up. Everything just looks and sounds amazing.

2 stages in particular kicked my butt like crazy and I quite enjoyed it.

Ian must be jumping for joy right? I mean Bowser didn't kidnap Peach! ;)