Wario, even more so than his foil Mario, has become the go-to character for showcasing the uses of Nintendo's new hardware. Touched! and Smooth Moves both illustrated how the unique features of the DS and Wii could be used to play games. Game & Wario is another attempt to humorously explore new tech, this time utilizing each and every facet of the Wii U's GamePad. However, a departure from the WarioWare mold as well as some bland uses of the GamePad leaves Game & Wario far behind its predecessors.

The conceit behind Game & Wario's story mode is that the hot new video game accessory, the GamePad, has just been released and the inexplicably robust WarioWare cast is all abuzz. Wario himself decides to design games for it in an effort to make some money, and I can only assume that the 16 mini-games available in Game & Wario are the concoctions of his depraved mind. 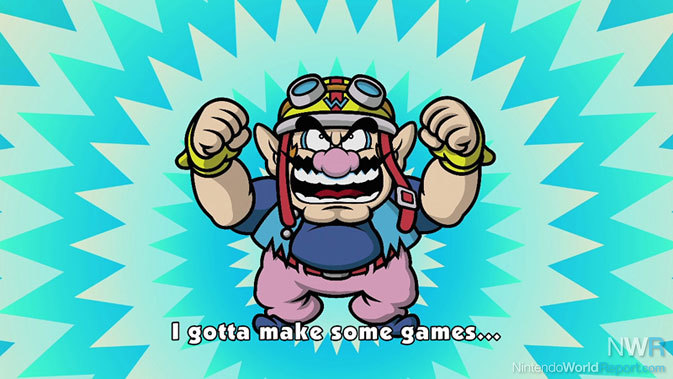 12 of the 16 games make up the Single Player mode, even though a few of them can actually be played two-player. One game is available at a time, and once the player completes the first level or challenge in each, Wario unlocks the next one. All told, each of the 12 games can be unlocked within the span of about two hours. They all have a few different levels to play, but, save for a few exceptions, I doubt you'll be going back to play the games more than a few times. 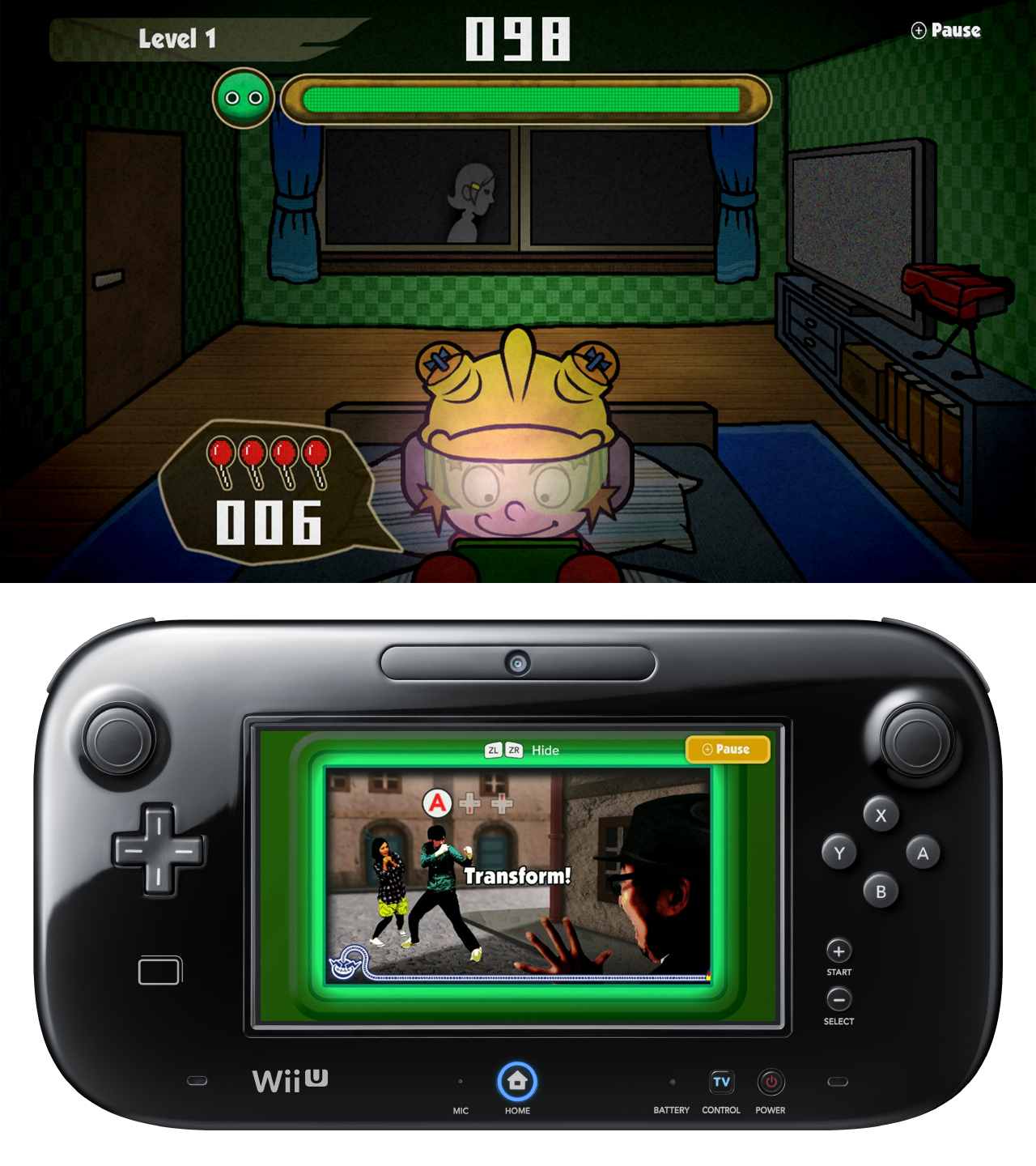 The best game, ironically, is "Gamer," which literally has you playing microgames from the original WarioWare games. While you play those familiar classics on the GamePad, like pressing A to pick a nose or running around to avoid getting stomped on by a foot, you must also watch the TV to make sure your mom isn't about to walk into your room to check if you are sleeping. If she's coming, you must hold the triggers to pause the game and pretend to sleep. The trick is, though, you only have so much stamina, and pretending to sleep drains it. If it depletes completely, you fall asleep for real and the game is over. It's a fun twist on the old WarioWare formula, and it works incredibly well.

Another standout is "Shutter," which uses the GamePad like a camera. On the TV, a scene is playing out, such as a musical or a town being haunted by ghosts, and the player must take pictures of specific people before his time or film runs out. This is done by pointing the GamePad at the TV and using it to zoom in and snap pictures. Similar to something like Pok­émon Snap, the pictures are graded on a few qualities, such as if the character is looking, if he's fully in frame, and so on. I found myself going back to this game a few times.

"Design" is interesting, especially played with two people. Using the GamePad and the stylus, the players are asked to draw specific shapes and angles freehand, like a two-inch line, a triangle with six-inch sides, or a 55-degree angle. After each drawing, the true length or angle the player created is revealed and graded. It was fun to mess around and see how bad my wife and I were at estimating different measurements. Not a showstopper by any means, but a decent little game. 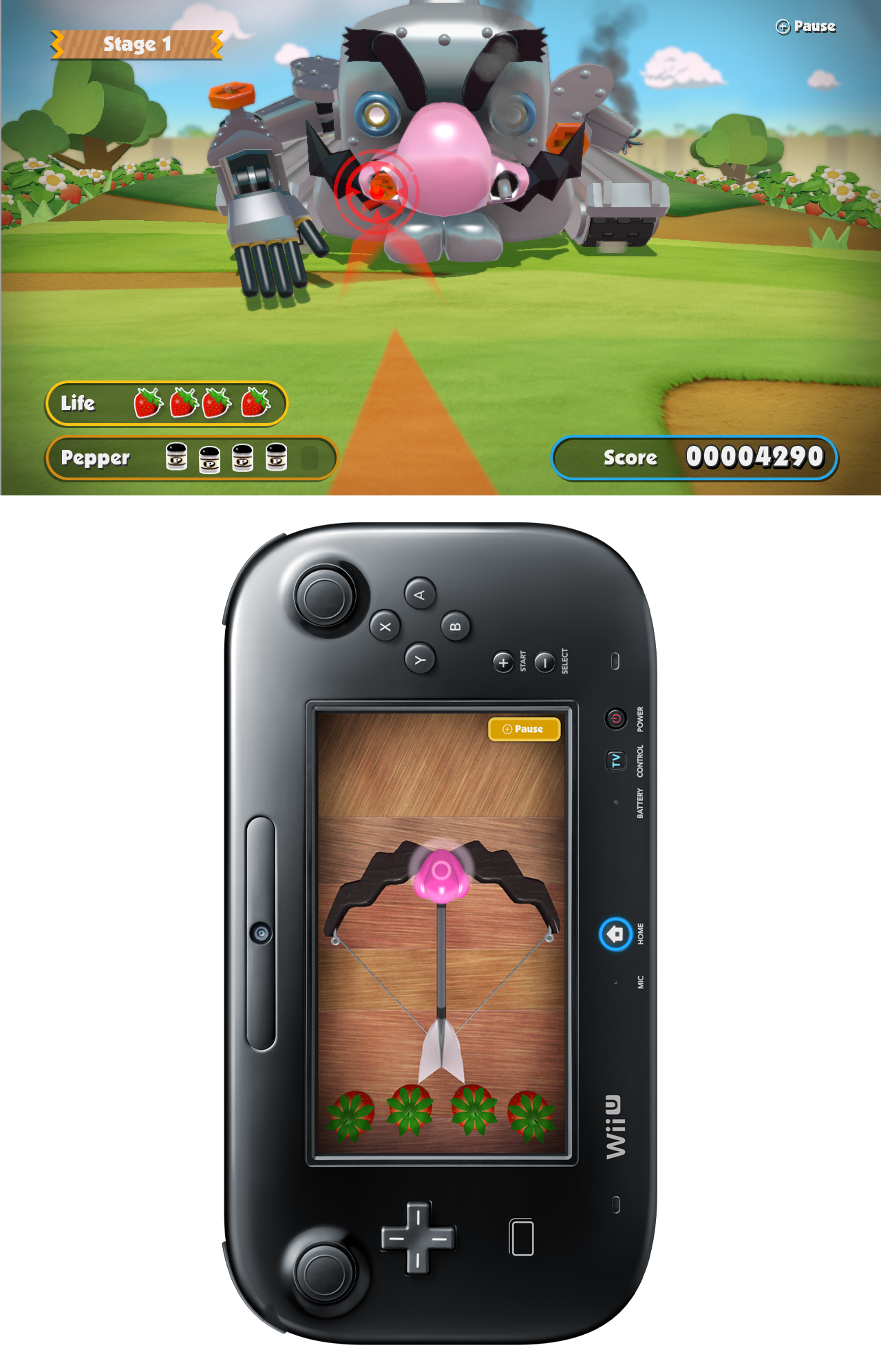 Unfortunately, the rest of the single player games aren't worth playing more than once or twice, and most feel like a step backwards from what we were doing a generation ago on the Wii. "Arrow" has you move the GamePad around to shoot down invading robots on the TV screen. It works, but it feels odd moving the clunky GamePad around, especially considering games like Link's Crossbow Training and House of the Dead: Overkill seemed to perfect light gun controls with the Wii Remote years ago. "Bowling" requires flicking a ball on the GamePad's screen and then tilting the controller to adjust its direction down the lane, but, again, it feels like a step behind playing Wii Sports.

Other games simply fail to use the GamePad in an interesting way. "Ashley" requires you to use the GamePad's gyro sensor to fly through a shmup-type game while the A.I. automatically attacks for you, which makes the game boring on top of being somewhat unresponsive. Another gyro-heave game is "Kung-Fu." In it, the player tilts the GamePad to make the constantly-jumping character move across platforms in order to reach the finish line before a timer runs out. It's as bland as that description makes it sound.

The multiplayer suite doesn't fare much better. Of the four games, only two are consistently fun to play, and one of those is really just a Pictionary clone. "Sketch" supports up to five players, with each taking turns drawing images on the GamePad based on commands from the game. Meanwhile, the other players watch the drawing appear on the TV and try to guess what it is before time runs out. Simple and surprisingly fun, but it it's something you could do with a notebook and pen. 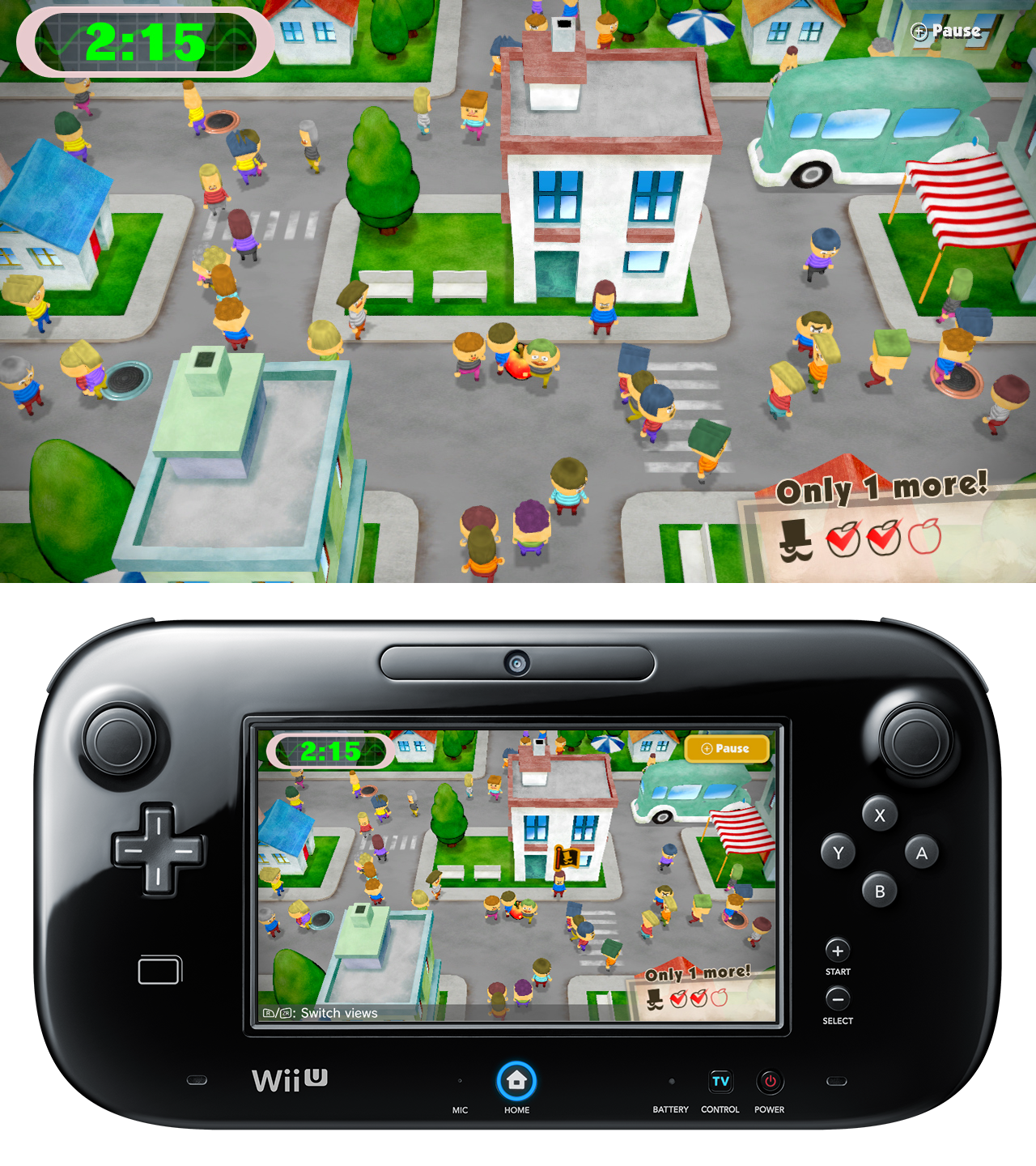 "Fruit" is the other gem. In it, one person plays as the thief on the GamePad, milling about with a large crowd, slowly grabbing up fruit strewn about the stage. The other players, meanwhile, watch the TV and try to pick out who the thief is. Once the fruit is gone, a line-up of 10 or so suspects is displayed, and each player picks who he thought the culprit was. It's a surprisingly addictive game that gets exponentially better with the more players you have.

The final two games, "Island" and "Disco" are pretty forgettable. "Island" has each player tossing down little critters on a large target, trying to land in spaces worth the most points. However, players can knock each other's critters about to try and muck up their scores instead of simply trying to land on the spots worth the most points. It's not bad, but it moves a little slow for my tastes and doesn't really use the GamePad in any inventive way. "Disco," on the other hand, is downright bad, though maybe I just couldn't figure it out. It is some sort of rhythm game, with two people holding the GamePad and looking down at its screen. The goal is to press buttons in rhythm to attack, and then to match that rhythm to defend. My wife and I tried a few times and just couldn't get the hang of it.

Unfortunately, that's all there is to Game & Wario. I understand wanting to break away from the WarioWare mold, but most of the games available here aren't all that fun, both in core concept and GamePad implementation. Between the single and multiplayer modes there are a few standouts, but there isn't enough there to justify picking the game up for your next party or to hold you over until, say, something like Pikmin 3 comes out. Game & Wario is a very disappointing outing for a series that has pushed new hardware in zany yet inventive ways a number of times before.

Disappointed with all the negative review, the content doesn't seem to justify the price. I canceled my pre-order today, I may pick it up when it's $20.

I've always loved Warioware, so I started this review thinking I'll give it a chance one day. Then I saw the number 16 next to the word games. Won't give this game a second glance.

This game didn't really look all too special, so the negative reviews Game & Wario has been getting aren't too out of left field. It's a shame.

Man, when was the last time an internally developed Nintendo game scored this low on the site?

Part of me believes Intelligent Systems could have put out a better Warioware game if instead of creating long-playing games they developed several engaging shells/vignettes for playing microgames, much like Gamer which is consistently hailed as the best game.  It would be a great way to advance the series.


For the other games that did work, like Shutter or multiplayer ones like Sketch, they could be included as unlockables like the "how long can you go" minigames of other WarioWare entires.


Unfortunately, we got this.  It would really be a better idea to just buy a copy of Rhythm Heaven Fever and play it on Wii mode.

If you were at all interested in this game before the review, I implore you to still check it out. Mileage may vary, but so far I'm loving the humor and differing styles of play. Read some other reviews, too....  this is definitely on the low end of the spectrum, with others getting a kick out of it.

Since this game scored so low it reminds me that we could have gotten Tomb Raider, Dead Pool, Metal Gear Revenagance, and  Lords of Shadow 2 for the Wii U.

Nintendo has more or less said what the problem with this game is. They had a bunch of gamepad-only concepts, most demoed already at E3, but no cohesive product. They thought about making them built in software but, in the typical Nintendo fashion, they looked at their franchise catalog and found some pigskin to squeeze this in to, exactly as done with Epic Yarn and many other games. Wario's outings are almost all very good and the underlying strength has to be creativity followed closely by humor. I hope Nintendo ponders the uncharacteristically terrible review scores (in Japan and abroad) and understands their software is still measured against a very high bar. That said... I just picked up my copy at Gamestop. (best cover art this year?)

I wish they combined Nintendo Land and Game & Wario into one.

And sold it on eShop for a low price.

I played "Gamer" at a Best Buy. It was really fun. Almost thought about buying the game, but the review here made me rethink that. It felt so "Wario Ware" (because that's what it was) but the hook made unique. Didn't try the rest.

Maybe if they added WALUGI! Itwould WORK!!!
p.s people say Waluigi is gay, but think about it wario's brother is a corny one but Nintendo does corny better than anyone look at twinkle from the lengend of zelda and wario himself! quite frankly i think the Wario Bros beat their rivals anyday! :cool;