A bunny hop into a sweet and short adorable adventure on your Wii U.

Often when mobile games come to Nintendo platforms, players get grumpy and wish that they didn't come at all. However, in the last few months we have seen some major changes on this front; this mostly has to do with quality. Games like Gunman Clive and Super Little Acorns 3D Turbo contribute a good experience for a fair price. The trend continues with Kung Fu Rabbit, which has been made available on the Nintendo eShop for Wii U. 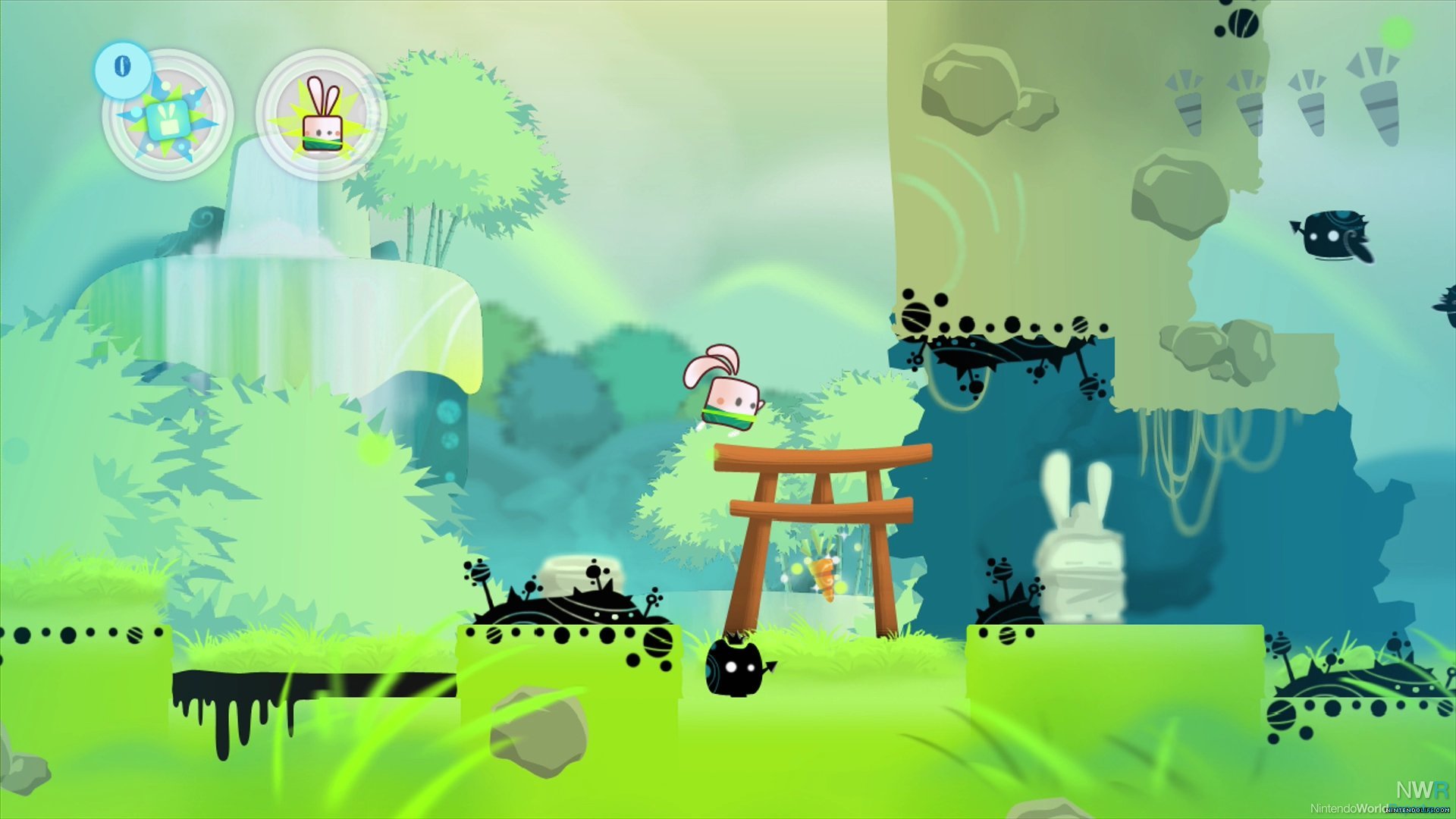 The game, developed by Cazap and Ctools, is a 2D platformer and was originally released on iOS and Android devices last year. Kung Fu Rabbit tells the story of a master who has to save his disciples from a gigantic goop army. The clear goal in every level is to grab a bunny friend at the end. Along the way, you can collect carrots for additional points. This is easier said than done, as they are put in devious places and it requires a lot of skill to snatch them. The carrots aren't just for show and tell, as you use them to unlock new items, such as claws to make wall jumps easier and more manageable.

In the beginning, the level designs look simple. Beneath that simple look, however, the difficulty curve grows at a steady pace and before long the game will become quite challenging. The placement of obstacles and enemies will always keep you on your toes, which makes completing the stages later on so much fun. New strategies need to continually be developed, taking into careful consideration how each stage has a unique set of challenges to overcome. If you do make a mistake, you are set back to the beginning of the stage and forced to rethink your decisions. 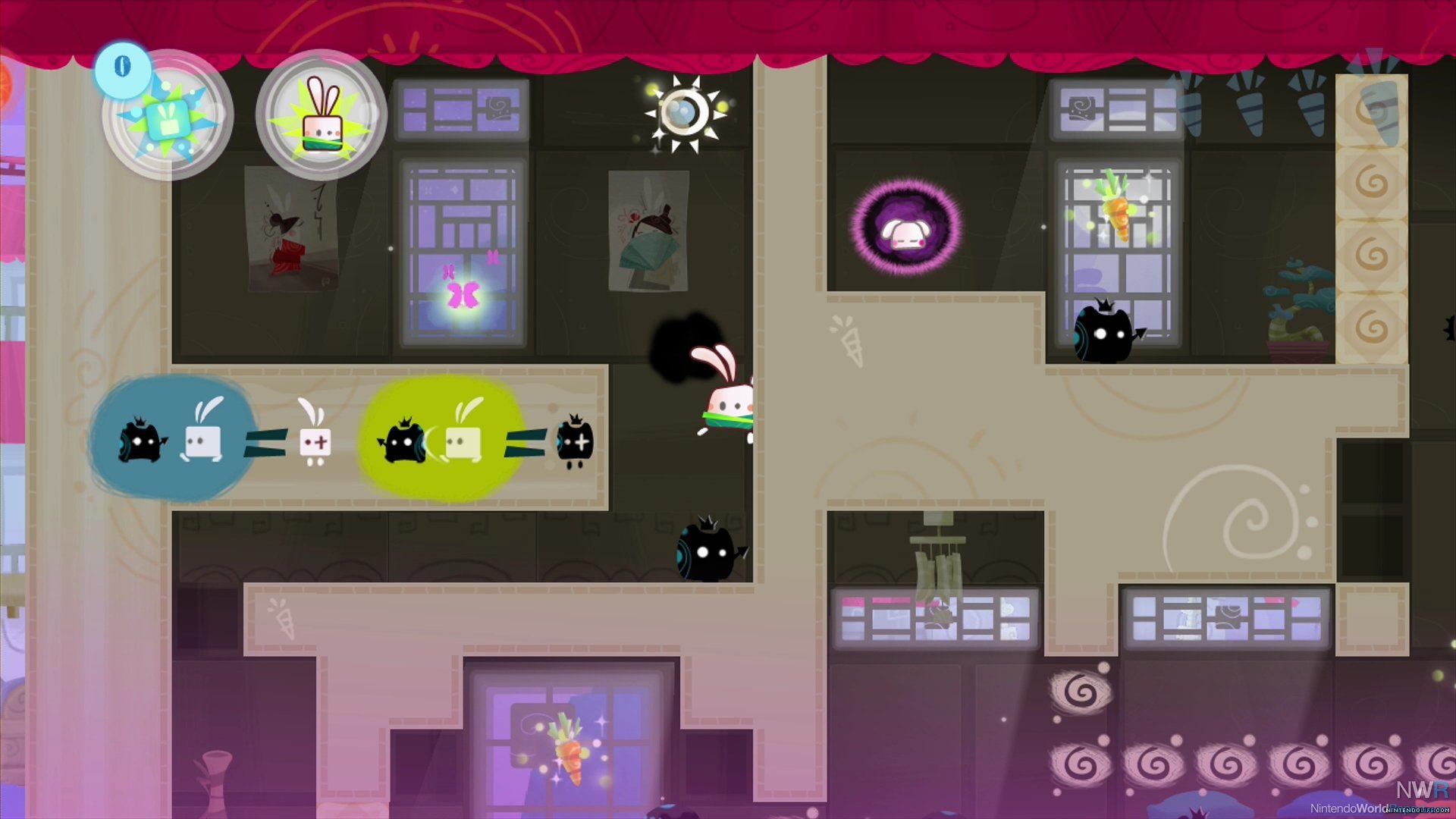 It helps that the controls are tight, and that Kung Fu Rabbit supports an array of control options. It is easy to stick to the Wii U GamePad, as the game is fully playable on the screen. All the other options work well enough though and if you prefer it any other way, there is a good chance that is available to you. You use the Wii Remote sideways to have a classic feel, or you can go a bit modern with the Wii Classic Controller and the Wii U Pro Controller.The jumping mechanics are slightly floaty, though it never feels out of control. These floaty jumps can even be advantageous, allowing you to get to seemingly out-of-reach destinations.

Kung Fu Rabbit certainly isn't the longest game on Nintendo's console, as you can beat it in roughly four hours. The initial campaign has you go through three worlds with each 20 levels, with a special fourth world unlocking bit by bit as you play. The first set of stages can be completed in two minutes each tops, but later in the game you will likely fail multiple times. Luckily, it never gets too frustrating.

Upon completing the campaign, you will be rewarded with hardcore versions of all the levels. These will throw in more deviously placed obstacles, and really adds to the replay value. These new stages aren’t  completely original of course, but it is fun to come back to it for a few minute at a time, and then go on with your daily life. 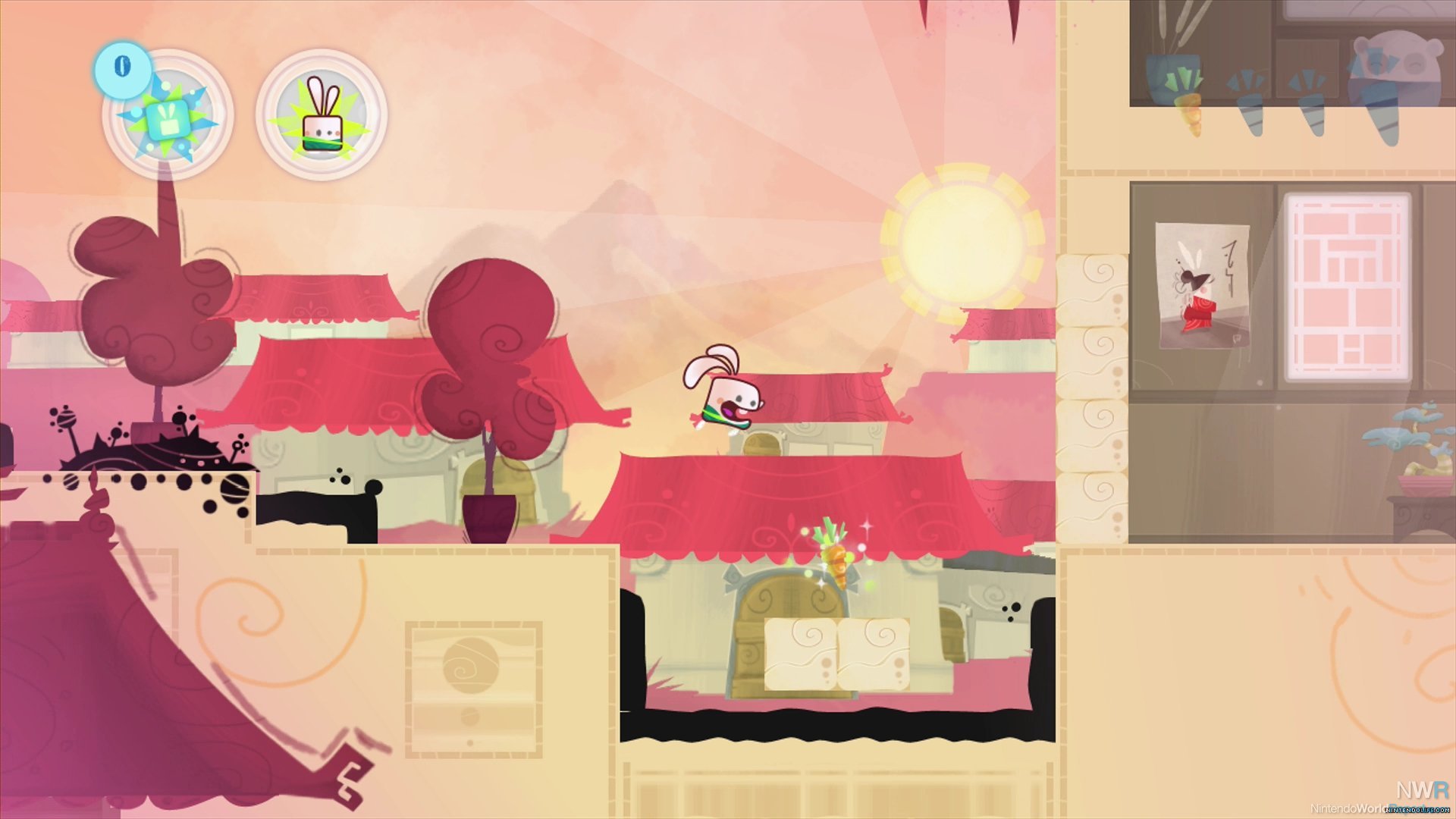 I truly liked the look of the game, which takes place in a beautiful oriental setting. The art style is delightfully cartoonish and adorable to look at, even if some of the design elements are a little overused. The music shows the game’s mobile heritage, as it consists of short samples on a constant loop. Considering that each song is used for a group of stages, they become tiresome quickly and simply aren’t enjoyable. It is a shame really, as the sound effects fit the style they were shooting for.

Kung Fu Rabbit is an enjoyable romp and is certainly worth checking out, if you are looking for a fun platformer. While it does take a while to get going, the game is incredibly fair and grows alongside your skills. If you are in the search for something neat to play on the Wii U, go stop by the Nintendo eShop and give this game a chance!

Huh! I never even knew this game existed or was coming to a Nintendo system until right now. I think I'll give it a try...

This is a seriously solid little game! The review is spot on; this one is absolutely worth the five bucks.