There ain't no party like a Mario Party party!

It is easy to dismiss Mario Party 9 without even giving it a try. Since Mario Party 6, no game in the series had a major impact, with 7 and 8 almost being perfect examples about how to take the fun out of a franchise. Similar games surpassed its formula, and it unfortunately lost appeal with the public at large. Then, in 2010, NDCube's Wii Party showed different ways to improve and rebalance the concept of a board game. Its mini-games were fast, quick bursts of fun, and the setups held the interest of players. As a company, NDCube learned many lessons during this time, and proved that Nintendo could put their trust in them. This trust formed the next step in a franchise that really needed one: Mario Party. They not only succeeded in applying these lessons to the right place, but Mario Party 9 is also proves that change is a good thing.

As soon as you boot up Mario Party, a main menu filled with various options greets you. We begin our journey with the good old Party mode, which had a complete overhaul since we last greeted it. It maintains the same board structure, with various circles for mini-games, power-ups, and random events, which are specific to each board. However, your goals and how you achieve them have become more complex this time around. First things first, you can't set your turns any longer. Every board has now a more linear structure, which always has a beginning and an end. Your character doesn't move any longer, as he/she instead hops aboard a vehicle, which takes moves the group from point A to point B. This also means that the progression made on the board counts for everyone.

This, however, doesn't mean there aren't ways to screw someone royally over along the way. Various elements on the boards, like unplayable characters and random events, can change a first place leader to a last place loser in a fraction of a second, and it is important for players to stay on their toes throughout the duration of a match. This renewed and exciting factor fits correctly with the new currency in the game: say farewell to the stars and coins of old, and welcome the mini stars! Players receive these shiny beauties by competing in mini-games, by passing them on the board, and through all the other ways you would in a Mario Party game. Like stars, the play with the most of them at the end of the game is crowned the winner. Beware of purple and dreadful mini ztars though, which make you lose your collected mini stars in a heartbeat! And believe me, that is still frustrating after some many iterations. 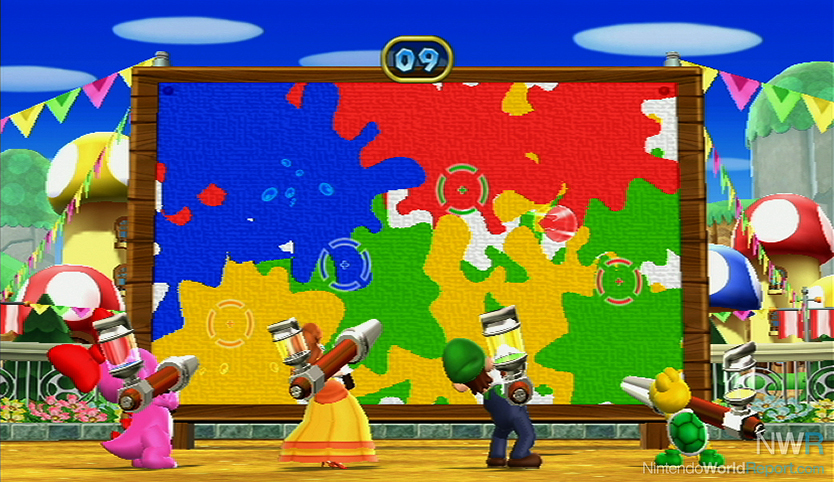 Mini-games are still what Mario Party is all about, although they are represented differently than you might think. In the older Mario Party games, you would have to play one after everyone had rolled the dice. In Mario Party 9, there are dedicated mini-game spaces that trigger an activity when you step on them. Normally, the player who steps on the space will have to pick between three mini-games, which means you can pick and choose the ones you really want to play. The instances where you can't choose are the Bowser and Bowser Jr. mini-games, which sometimes will force two players to work together or play a reversed mini-game in which the loser becomes the winner of ten mini stars. The other new thing they introduce with the mini-games are the boss battles. During a game, you will find two of these in every match (one in the middle and one at the end). In these you are forced to cooperate with the other players, while trying to do the most damage yourself for major points. You fight against Whomp, King Boo, Lakitu and so many other Mario favorites. The variety of ways on how you defeat these nasty buggers is quite impressive and forms a fresh change in the formula. You also get a chunk of mini stars when you win, so there is an incentive to do your very best. The mini-games are of great quality, and every single one has its own set of objectives and goals. 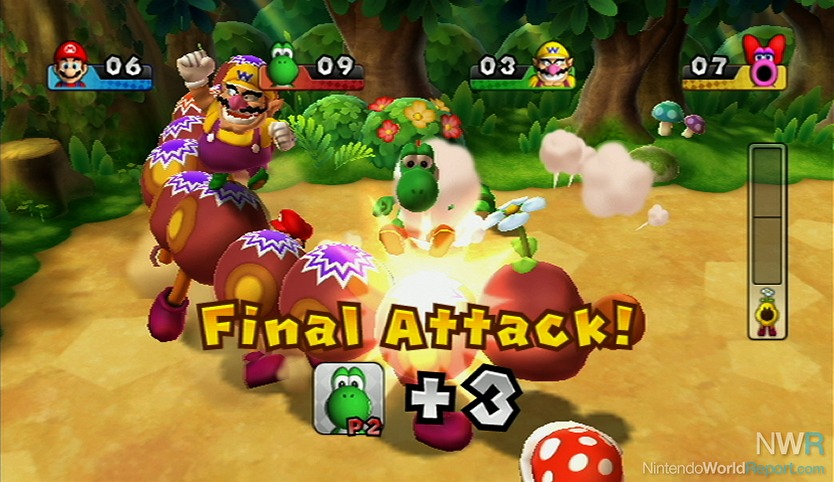 From the dozens of mini-games included, I never felt that one or two were of lesser quality. There are a variety of different gameplay offerings, and most players should be able to find a favorite. The same goes for the boards; you can relax on Toad Road, and then be frantically followed by ghosts in Boo's Horror Castle. Every board has a distinct Mario feel and its own rules and touches to make it stand out.

After partying, players can continue the fun on their own in the Solo mode, which is, thanks to the new set-up of the boards in Mario Party 9, also not a total bore to play through: you could be done in five or six hours. It really depends on your skill and luck though and depending on that, it takes more or less hours to play through.

In the Mini-games section, you have five play modes to choose from. Most of them are unique ways to experience the mini-games, similar to the structure of Wii Party. Fortunately, you don't have to actually unlock mini-games to fully enjoy these modes. Except for those that are boss-specific, most of the mini-games are open right from the get-go. This means you can experience them in any fashion you prefer. Another neat thing is that when you click on the option, you get a brief description of the mode and how long it will take for you to finish it. Mostly, however, I just found myself using the Free Play option the most, since I wasn't too fond of the linearity in these specific modes. The odd exception to this rule is the Time Attack mode, where you try, solo, to complete ten mini-games as fast as you can. Your scores end up on a leaderboard, so you can compete and compare.

Extras is also an interesting mode, offering weird and fun twists on the mini-games you love, as is Perspective Mode, in which a solo player tries to complete ten mini-games in a brand new perspective. It places the camera right behind your character, which makes completing activities quite a challenging feat, but an absolute blast to play through. It is a shame, however, that is there no real incentive to go back through these experiences. Extras also offers an extended version of Goomba Bowling and a weird version of European football called Shell Soccer. Both are very novel in how they present themselves, but they won’t hold your interest for long. The most compelling Extras game was Castle Clearout, which is a full featured and fun puzzle game. It is a bit like Puzzle Bobble(Bust-a-Move), but you have more control over the gravity impact on your falling marbles. You also need to form groups of at least six, which make things trickier when you reach the higher levels. There is also a two-player option, which comes complete with garbage to screw your opponent over. 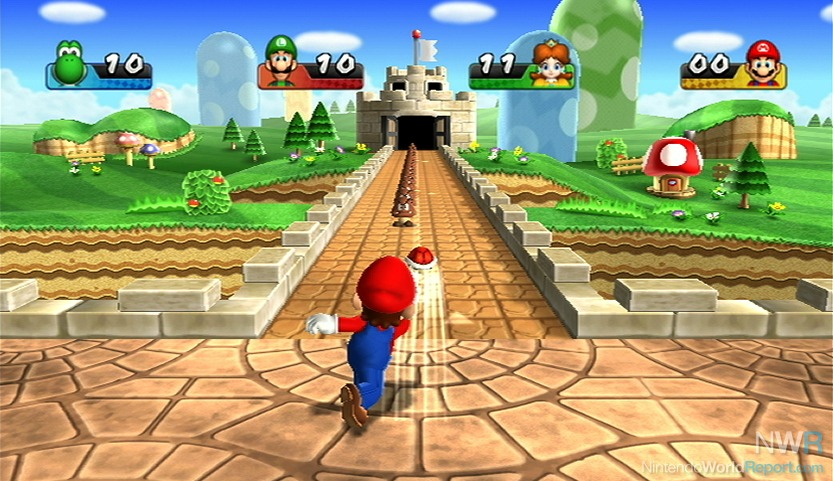 Our journey comes to a close with the Museum, in which you can receive various unlockables by trading in the Party Points you receive by playing everything in the game. There is a sound test in which you can find almost every song in the game, you can purchase new vehicles to drive around in, you can look at your records, and so much more. A strange option nested in all of this is ''Stars,” which allows you to purchase new constellations and get information about them. It is an optional thing, but it does strike me as weird.

Is there anything I didn't like about this game? Perhaps an online component would really make this package complete. While there is a lot to do as a solo player, nothing would have been more perfect than having a multiplayer match going whenever desired. I also miss the epic 50-turn matches; the game is set-up to be more linear, which might rub some people wrong, and sometimes it can take a while to get things going properly. When it does, however, the game is consistently fun.

Mario Party 9 is a gigantic departure for a series that some hold very dear. NDCube has done much to improve what was there, shaken things up, and made them completely their own. There’s plenty to do and it doesn't matter if you play on your own or with a group of friends or family on the couch. This is not a sequel, but a complete overhaul, and a darn fine one at that.

This actually seems like the New Mario Party to get. I wasn't ever interested in Mario Party after they took out DK as a playable character. But, I might want to retry the series again since it's got an amazing overhaul. Thanks for the review, and hopefully I'll be picking the game up when it comes out.

I hope they put DK back in because I always use him in Mario Kart and I want to use him in Mario Party also. I'll still get it, (I just won't be completely satisfied if Donkey Kong isn't a playable character).

The lack of online play is the deal breaker for me. Looks like a fun game & all but I rarely have opportunities for local multiplayer these days.

theres a mario party 9, how did this escape my radar? I know not everyone likes these, but I do!

Will consider getting this, sounds like the long break was what the series needed to reboot itself and make for a quality game!

I also hope they got rid of that stupid flying hat guy from the last Mario Party, (that dumb character was annoying from the first second I saw him). 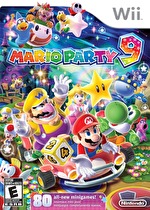