Mario and his crazy goombah-stomping company are at it again! After spawning an entire genre of mascot racers, the original 'King of Kart' is back in an all-new handheld race, featuring some of the best multi-player in the series!

Here’s some statistics and things that we now know after the Beta test that I had today….

3. 5 tracks for multiplayer with one cartridge, taken directly from the SNES version.

5. Coins are back, and like the SNES version, they increase your top speed, and help protect you from collisions. Supposedly there are around 50 coins per track.

6. All weapons have made it over from the N64 version of the game, except the fake power up boxes. I would believe it’s because they would be difficult to distinguish.

9. Replays are now available after every single player GP race.

10. You can trade ghost data with friends with the link cable.

11. In Mario GP Mode you get three continues, and you need to finish in the top 4 to advance to the next race.

12. In the Mario GP Mode you now get ranked after every Cup. You are graded A-F, or if you’re really good there’s Star and Double Star grades. There may be more, but that’s all that’s confirmed. From what I could tell you are graded on time and coins collected.

13. In the Mario GP mode the game is saved after every cup.

14. There are many cameos from your favorite Mario game characters including Mouser, Bob-ombs, and Shy Guy!

15. There are still unknown secrets which could include but are not confirmed:

Note: There is no power slide boost ala Mario Kart 64..

2. Time Trial – Race alone on a track for best time. Ghost data is back and can be traded via link cable.

3. Quick Run – A little different from Time Trial where you can toggle options like laps, items (power ups), and coins.

2. Battle Mode – Battle mode similar to SNES battle mode. One thing to mention is that if you lose all your balloons you turn into a walking bomb that can take out people still actively battling.

1. With 4 players on one cartridge there’s 5 tracks, all taken from the SNES version of the game.

2. With 4 players on one cartridge everyone races with different colored Yoshi’s.

3. If everyone has a cartridge, you cannot use the same characters as reported before. Everyone has to be a different character.

4. If everyone has a cartridge, you can pick any track from the game, except the SNES tracks.

Special Cup: (needs to be unlocked)

PGC was quick to call attention to Mario Kart Advance getting a new name: Mario Kart Super Circuit. Since the moniker appeared on Nintendo’s website, it’s safe to say that’ll be the game’s name—at least in North America.

The latest edition of Tendo Box’s always-excellent “Galloping Gaijin” column by Stephen Langhorn with all kinds of goodies (including an Animal Forest interview) including new details on GBA Mario Kart. Ol’ G. Gaijin is uncertain the “Super Circuit” title will be used in Japan but has translated nuggets of joy from Famitsu!

“What I can tell you is that Famitsu, whilst previewing the title this week, have mentioned that your driving technique will in some way affect your overall score. Also mentioned is the presence of a blue cave mouse (the egg thieves from Yoshi's Island) at the start of each race and that it may possibly represent a playable character…”

Hmm, we’ll see, though this is what Famitsu is saying. You’d really think that by the 3rd kart outing, Nintendo would implement some cool hidden characters. Let’s hope Famitsu isn’t getting our hopes up.

It also now seems that multiple players can race as the same character, as Famitsu featured a screen with four different colored Yoshis racing each other! Now we won’t have to all fight over favorites like Yoshi, Toad & Wario! Hasn’t been confirmed yet, though such a screenshot speaks for itself.

We're back with some new info from E3 and Nintendo's Japanese site. Thanks to Nintendo NCL's Mario Kart Advance site, we have some new information about the game we're all waiting for!

MKA will be chock full of multiplayer goodness. As previously mentioned, the game will have all the lovely modes available from previous Mario Kart games, but now we know the details of the 1 cart, 4 players deal. Much like F-Zero, there will be one unique course for the 1 cart-4 player mode. But, to keep everyone for raiding Intelligent Systems' headquarters, they also have a Battle mode course for one cart only play. It may not be "every course," but it covers the two staples of the Mario Kart series. Besides, one battle arena is usually good enough if it is well done. As a little bonus, using the Mobile adapter, Japanese players will be able to post their best times on a nation-wide ranking board! Pretty neat! Sadly, there is no mention of online gaming itself... It was probably dumped due to time constraints.

Intelligent Systems has also done something interesting with Boo. It seems that in Mario Kart Advance, Boo will hound the person in first place and steal the leader's item. And if the leader is item-less, Boo will hang around. It seems that this will also present visibility problems... Also, as you can see from the new pictures (c/o NCL), many familiar enemies will line the path: they've brought back the Shy Guy natives from Yoshi's Island!!! A little plug for the upcoming port, perhaps? Also, it seems that fireballs will hop up from the lava in Bowser's Castle now, just like in the platformers!

And now, with no further adieu... The list of the Mushroom and Flower Tracks, acquired by Max and myself in E3:

That's all for now! And if you're in Japan, be sure to check out Mario Kart Advance on June 23 and 24 at the World Hobby Fair to get a preview of this lovely game.

Nintendo has released some new info and screens for Mario Kart Advance. The biggest news is that the game will be compatible with the GB Mobile Adaptor in Japan! Although no specifics have been confirmed, we're all hoping that you'll be able to race against friends online. If so, this announcement GREATLY increases the likelihood of GBA's online component somehow being supported in North America and elsewhere outside Japan. The new screenshots also say a lot; the game's graphics are markedly sharper and more vibrant than in previously released photos. One screen shows seven racers simultaneously! Another depicts what appears to be a background rendition of Luigi's Mansion from the infamous GameCube demo...this points towards some interesting possibilities as far as interconnectivity, but we probably won't know for some time.

New screens have surfaced of various parts of the game. Namely, the title screen, character select screen and victory screen, all of which showing the game looking very much like its predecessors. Unfortunately, for those hoping for secret characters this time around (such as Koopa Troopa) the character select screen leaves little room to suggest that this will be included. Then again, there never have been hidden characters in Mario Kart, though some of us keep hoping…

Overall though, the new screens prove that although this game is small, it definitely stays true to its roots and looks fantastic despite its small size!

When Nintendo announced it would be focusing more on its Gameboy Advance opposed to its next generation console, there were a lot of unhappy people. Once Nintendo let it be known that Mario Kart Advance would be one of the new handheld’s premiere games, frowns began to turn upside down. After spawning an entire genre of "mascot racers," Mario is back to the kart & revving it up!

Mario Kart Advance will be an all-new game, marking the third installment in the beloved series. Regardless, MKA stays true to its roots & appears to be a hybrid of its SNES & N64 prequels. All of the characters & weaponry from MK64 have returned while graphics and control harken back to the original Super Mario Kart. The best of both worlds combine in a game that fits right in your hand!

Although things are a bit smaller, the graphics are beautiful and Billy reports the game runs incredibly smoothly. From the level shown off at Space World, tracks will be flat and not 3D (featuring hills & pits). The game uses Mode 7 scaling graphics and all appearances seem crisp & colorful. The portable power of the GBA packs quite a punch!

Control is reminiscent to the original Super Mario Kart, though slightly different because the GBA has less buttons than the SNES controller. A button = acceleration B button = brake L button = fire weapon R button = hop / power slide. As in the last game, weapons appear in cubes instead of being flat on the road. Everything from spike shells to the string of banana peels is here, though the limited control scheme may prevent the ability to drag &/or fire weapons from behind, though this may still be incorporated.

Of course, what would Mario Kart be without multiplayer? The best part of Mario Kart Advance is its use of the GBA’s link-cable, enabling four players can go head-to-head, each with their own full-screen view. No need for split screens here! There’s no word as of yet on battle mode, but we’re sure it will be included in some form. Additional options and features have yet to be specified.

It is not yet known whether or not Mario Kart Advance will be compatible with a Game Cube version of the game, but we hope this is the case.

Mario Kart Advance is scheduled to be releases in the U.S. July 2001. Importers who can’t wait can snag the title next March, when it’s released in Japan. Go for that checkered flag!

Mario Kart Advance was shown off again to an eager crowd at ECTS. The Gameboy Advance will be launching in both Europe and the U.S. Simultaneously in July 2001, could Mario Kart Advance also be released simultaneously as a launch title? Here’s hoping, however, it seems the game has a ways to go in terms of development. Apparently many show-goers are preferring Konami’s mascot racer, 'All Star Racing' simply because it’s further along... 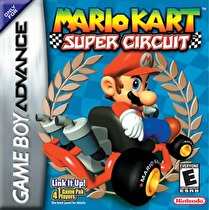