In Activision’s upcoming Guitar Hero add-on, they will bring the history of Aerosmith to life on video game consoles. While the game will be using the same engine as Guitar Hero III: Legends of Rock, it will have new characters and venues. The new characters will be, naturally, all of Aerosmith. You will be able to play as Joe Perry, Tom Hamilton and Brad Whitford along with the rest of the fictional Guitar Hero regulars. The new venues will showcase various moments of Aerosmith’s legendary career, such as their performance at the 2001 Super Bowl Halftime Show.

The game is set to contain somewhere between thirty and forty songs and will have five different venues. The first two songs in each tier will be songs by bands that influenced or were influenced by Aerosmith; the rest of the tier will be all Aerosmith songs. Apparently 60% of the songs will be by Aerosmith, while the rest will be by other bands ranging from Lenny Kravitz to Run-DMC. Last but not least, the popular boss battles of Guitar Hero III will also make a return, but they will be changed a little bit to address gamer’s concerns from the previous incarnation.

The game is being developed by Vicarious Visions (the same team that made the Wii version of Guitar Hero III), and is currently set for a June 29th release.

"All The Young Dudes" - Mott The Hoople*

"I Hate Myself for Loving You" - Joan Jett

"Livin' on the Edge" - Aerosmith

Encore: "Love in an Elevator"

While I remain annoyed with Guitar Hero because I kind think Activision is running into the ground and Rock Band is far superior, they appear to be making this Aerosmith game be mildly decent. As not much of a fan of the band, the list of other songs and bands don't seem awful.

I just don't see the point of this game. If you don't like Aerosmith it means you don't like 60% of the song list. And I don't think any such person could then justify making a purchase.

I'd assume so but nothing's been officially announced.
Obviously the standout songs will be final tier stuff.

On another note, its funny how Rock Band Wii comes out the week before this. In all honesty, everyone should buy the PS2 version of the game Wii's getting unless they love them some Aerosmith.

So annoyed.  No DLC, no mention or GH 1 or 2 for the Wii, no rock band controller compatibility, and now this.  Everyone has a different band they wouldn't mind a GH tribute game made for, and that's why it's a stupid idea.

True, seeing as they haven't even been able to get one Led Zep song so far. But as planetidiot said above they are purposely limiting their audience when they have both GH I & II and the 80's version that could be released on Wii.

Does it have Revolution X as a secret unlockable?

Does it have Revolution X as a secret unlockable?

I think that might be the only way I'd ever consider it...
but seriously, I got them game for a dollar back when Gamestops still had older games. Its so terrible but its so funny.

I imagine Guitar Hero:  Led Zeppelin would just be too darn expensive to make.

Oh my god, I would be on that so fast it isn't even funny. Jimmy Page is just too damn protective of all the Led Zeppelin stuff to ever let something like that happen. Maybe he will soften up and give everyone what they are dying for.

Guitar Hero: Led Zeppelin is a rare "one band" spin-off that would be a huge deal.

Pink is the most recent Aerosmith song that I like and even that's just a "sorta like".  But 70's Colombia era Aerosmith just rocks.  Pump and Permanent Vacation are killer as well.  I don't see any crappy "Don't Want to Miss a Thing" Aerosmith here.  The song list looks pretty good.

But I agree that Activision is milking this franchise too hard and it's only a matter of time before no one gives a sh!t anymore.  Remember when new Tony Hawk games were a BIG deal?  If you're young enough you might not.  Around the fourth annual game or so people got sick of it, and those games were still good.  It's was just not something that justified so many sequels.  You figure Activision would have learned from that.  League based sports games where rosters change every season are the only series that can get away with annual sequels.  Now expansions can work as proven with The Sims but on a console buying a new game every couple of months is just not going to fly.  Though EA will probably do the same thing with Rock Band.  Few game companies get this concept at all.

Look at SSB for the ultimate example of what to do right.  The franchise is almost 9 years old and yet only the THIRD game in the entire series just came out and it's a huge deal.  That's how you do sequels.  Make each game an event and you can keep it going for over ten years.  Use the Tomb Raider method and everyone gets so sick of a franchise that it becomes nothing.  You can't even benefit from retro releases because no one remembers when the series was ever special.  That's why some companies throw 20 old games on a budget compilation while Nintendo and Square Enix re-release each game seperately.  Yeah as a consumer that's not so nice but those companies can get away with it because they made those old sequels such an event that years and years later they're so fondly remembered they can be sold at the same price as a brand new portable title.

Since the songs were too damn easy, we played it for 5 minutes and got bored.  But at least it was Beatles!

Also I would suck up and deal with my earth-shattering hatred of Guitar Hero and would buy a Led Zeppelin version of the game. And I don't think their songs are as hard to get rights to as they used to be, I'm mean they seem to pop up every now and then in some of the most unexpected places e.g Shrek 3, Small Soldiers.

I liked that for School of Rock Jack Black made a special request video to Led Zeppelin to have "Immigrant Song" in the movie. 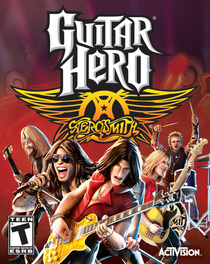