We caught up with Mikael Forslind to talk about his last game Alwa's Awakening and his upcoming game Alwa's Legacy. 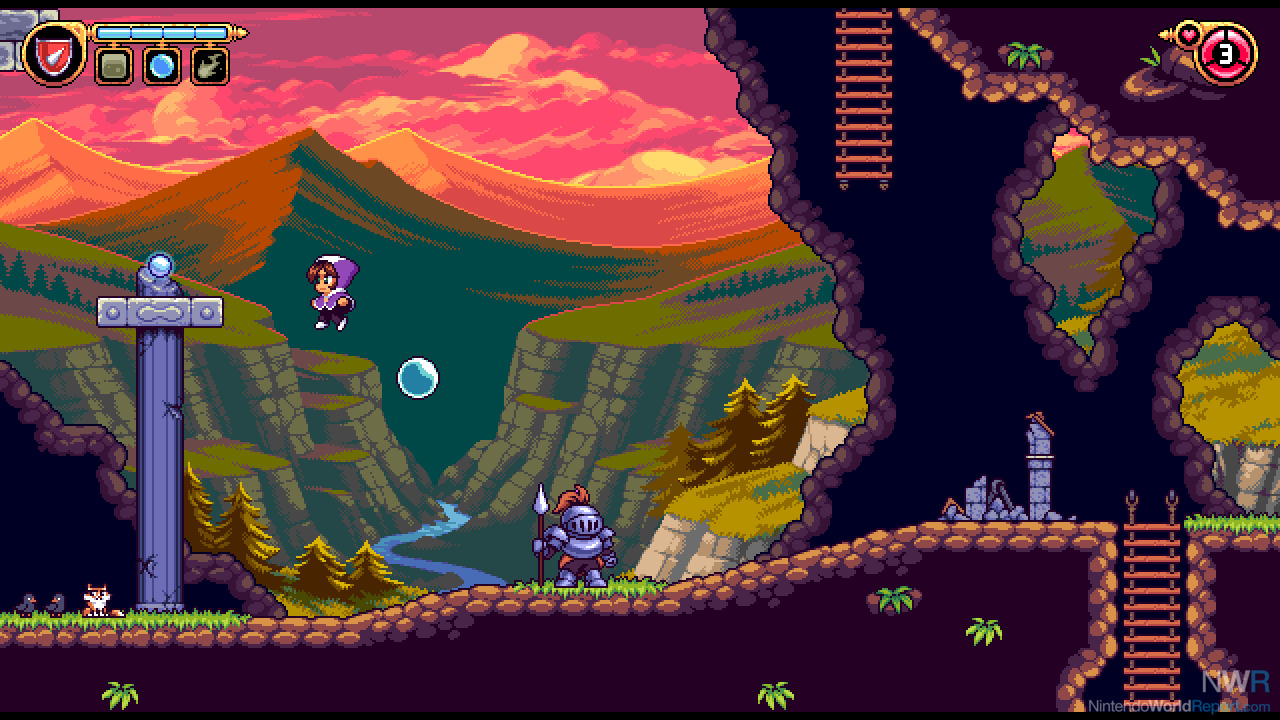 Elden Pixels might not be a household name, but you've likely come across their origins on a Nintendo system, as half of the original founding members previously worked with the likes of Image & Form (The SteamWorld series) and Zoink Games (Stick it to the Man, Fe, and Flipping Death). In 2017, they released their first title: Alwa's Awakening. A year later, their game came to Switch. The gap between the first release of their next game, the sequel Alwa's Legacy, on Switch after the PC release shouldn't be as long. Alwa's Legacy launched on Steam in June, with a Switch release coming soon. We caught up with Elden Pixels' Mikael Forslind to talk about his games, Metroidvanias, and more.

Nintendo World Report (NWR): First off, what is the origin story of Elden Pixels?

Mikael Forslind (MF): It’s a bit complicated but we were founded in 2016 and were originally four members. Two of us had previously worked at game developers Image & Form and Zoink Games and we were excited to make our own game. We released Alwa’s Awakening in 2017 and now Alwa’s Legacy that came out a month ago and with a Switch release looming around the corner. We’re a small indie team that’s trying to carve us our own little corner in this huge gaming industry. It’s really challenging but we’re making good progress and for every day that passes more and more people discover our games, which makes us of course super happy and excited for the future.

NWR: Making an NES-inspired game with the hindsight of 30+ years, what were some of the game elements you were able to refine from the games originally from that era? 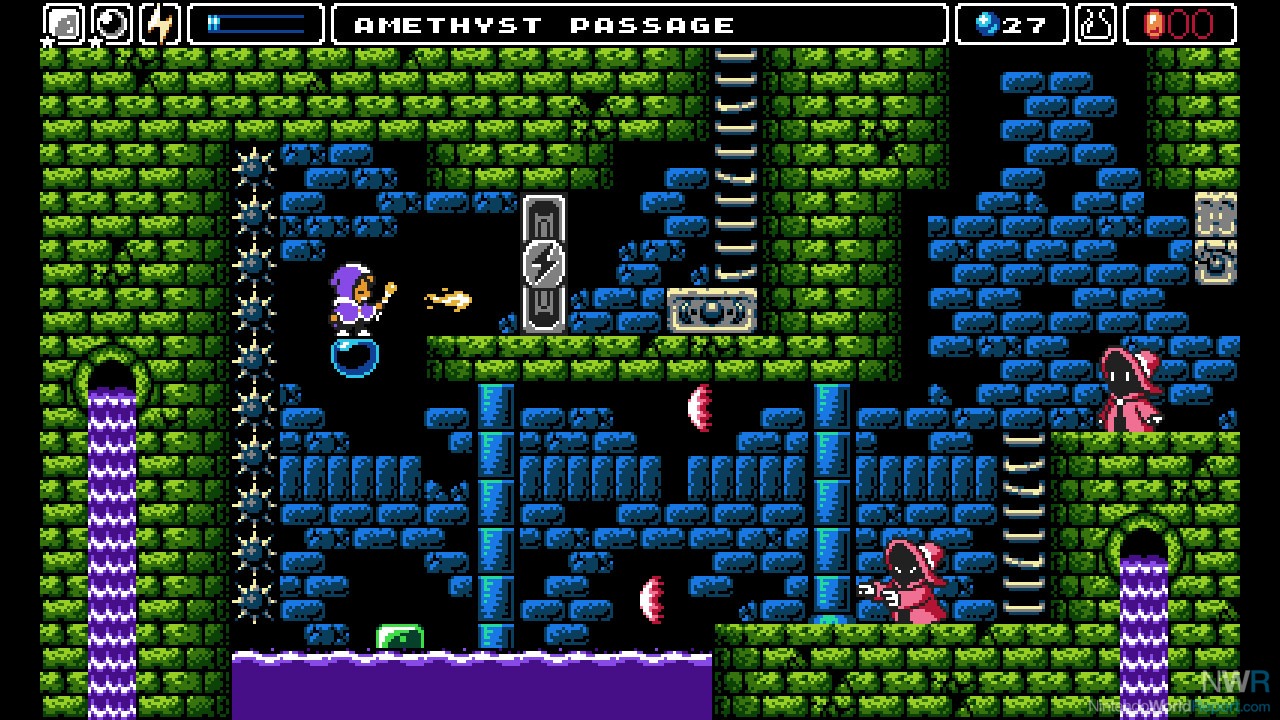 MF: The most apparent one is of course that we used a widescreen layout for our game instead of 4:3, which was the common resolution for old tvs. This gave us a bigger possibility to create more interesting rooms and puzzles, we did actually experiment with non-widescreen rooms when we did the first prototype and we have some fun looking screenshots from those versions. Besides that, we tried avoiding cheap deaths, unfair challenges and too illogical puzzles but at the same time we wanted to stay true to the retro feeling so it was always a matter of balancing. For us Alwa’s Awakening was not so much about refining the games from that era, it was more of creating a homage and a game that if it had been released in 1987 it would have been considered a classic.

NWR: What aspects of NES games did you not really have to change when making Alwa's Awakening and why?

MF: We tried to stay true to the NES restrictions as much as possible so the music is truly 8-bit (we even released a soundtrack cartridge on NES), the sound effects and the art style is as close to the NES restrictions we could get them. All through development we tried to make sure the game would be possible to port to NES. Even though it’s been a few years since the game originally came out we’re still thinking about a NES version, and who knows? It might be our next project?

NWR: I love the Assist Mode in Awakening. What are your feelings on including features like that in games? Does knowing that you have that kind of mode change development at all?

MF: The Assist Mode was actually added after launch in Alwa’s Awakening so it didn’t affect the development at all but in Alwa’s Legacy we had it from the start and it did affect the development a lot since it added a lot more work to the game. We need to save exactly how the player entered a room and recreate it if the player dies. It wasn’t that hard in the first game but in Alwa’s Legacy there are so many new possibilities that the Assist Mode was a lot more work than we’d expected. I definitely think we made the right choice including this mode in our game though. I love challenging games myself and I take pride in finishing a game that’s really hard but I think it’s great if people can choose themself how they want to experience our games. In today’s gaming world these kinds of customization is greatly appreciated and it’s definitely something we want to include in our future titles. Funnily enough we’re doing some prototyping of a new game and as much as I want to make it insanely difficult I don’t think it’s profitable in 2020 to make these kinds of games. Time will tell if this prototype will ever see the light of the day.

NWR: Alwa's Legacy aims to be a "modern retro game." What exactly do you mean by that? 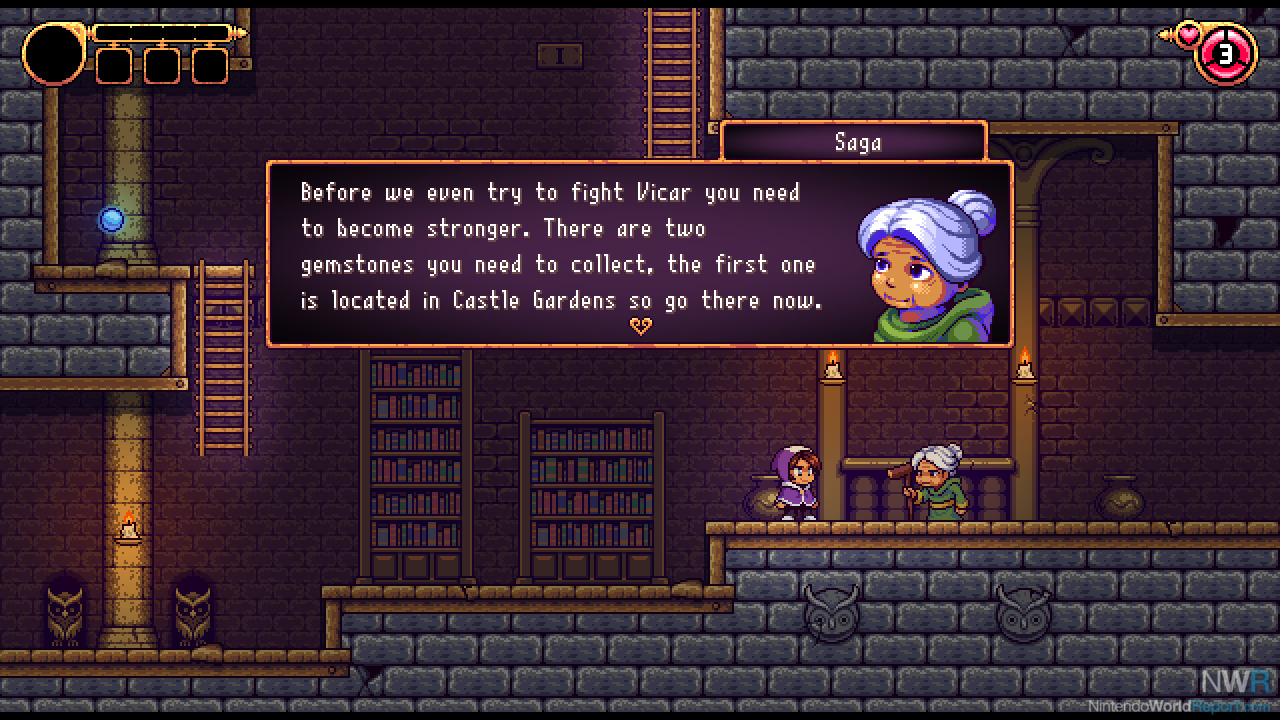 MF: I think what we mean is when most people see a game such as Alwa’s Legacy, they see a game that’s “retro” and they have their preconceived notions about what it means to play a game like that. For us using pixel art does not automatically make it a retro game but since we’re building our game on a foundation of games from the past we still want to call it a retro game but we want to throw in modern there as well since we’re using things like dynamic lighting, accessibility settings for gameplay and modern sound effects. All of this combined we think makes a great modern retro experience.

NWR: From Awakening to Legacy, what are some of the key changes and additions? What was the thinking in the evolution of the game?

MF: Alwa’s Awakening was a game we truly are proud over and what led us down this path but it was also the first game we ever made, so we learned a lot during the process. The way the design of Alwa’s Legacy started was that we made a list of the ten most common criticisms we received and we built our design foundation with the goal to fix all of those issues and I’m glad to say we think we did it.

By far the most common critique we get about Alwa’s Awakening is that player movement is too slow, warp points were badly placed and it required too much backtracking. So what we did was make sure Zoe (which is the character you control in both games) moves quickly and fast and it’s easy to move from room to room. We gave the player the option to create their own warp points from every save point in the game, which requires some thinking but also allows the player to carve their own way through the adventure. And lastly, we built more of a Zelda inspired world where the player can find temples they can tackle in any order making the backtracking less of an issue since it’s not really required in that sense.

NWR: There is a sea of other Metroidvanias on Switch. What separates Awakening and Legacy from the pack? 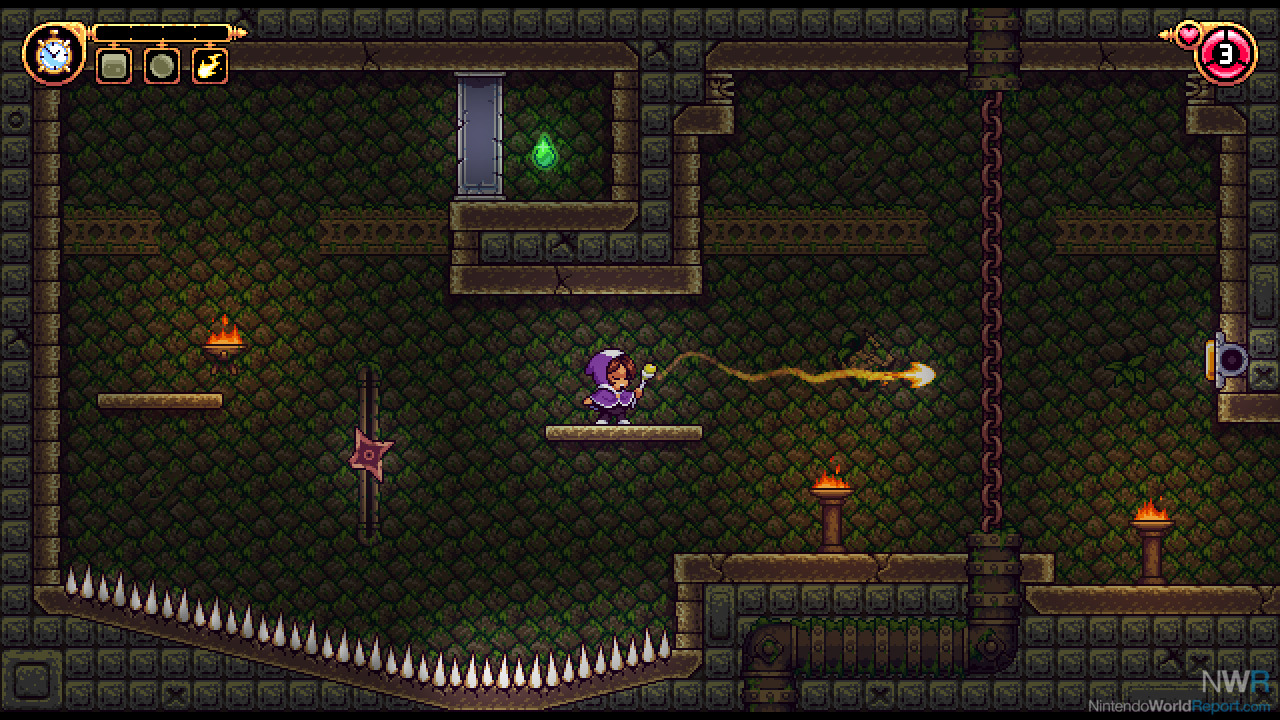 MF: We didn’t really set out to change the world when we made Alwa’s Awakening and Alwa’s Legacy, we wanted to create two awesome metroidvania games with beautiful pixel art, awesome chip music and great level and game design and I think we succeeded in doing that. We want the players to focus more on the exploration, the puzzles and the adventure than the action.

I think what sets our games apart from the rest, is that our title is never about the violence or the collection of wealth. I’m talking in broad terms here of course but most metroidvania games that I’ve played are often about killing enemies and collecting gold. In real life people are always chasing money so we decided early on we didn’t want to encourage the collection of some kind of currency instead in our game you collect these magic orbs. And sure, you can destroy enemies and bosses in both our games as well but the action and killing is never the focus. In fact, most of the bosses in the first game are straight out asking why the player is trying to kill them. And in Alwa’s Legacy we have a whole mode called Pacifist Mode where you can’t kill anyone or anything in the entire game and it was our way to encourage a world where you don’t kill and don’t collect wealth.

NWR: How has the last few months of development been during COVID-19? Has the game been affected? How has the team adapted? Was that the cause for Steam and Switch not being simultaneous launches?

MF: If I should be completely honest, it’s been extremely difficult. Not so much production wise but the sheer amount of stress and anxiety of seeing what felt like the coming world coming apart and in the middle of this you’re trying to make a fun metroidvania game. As much I think people still need a distraction and joy in their lives I almost felt guilty whenever I sent out a tweet or something about our game and encouraged people to wishlist our game. 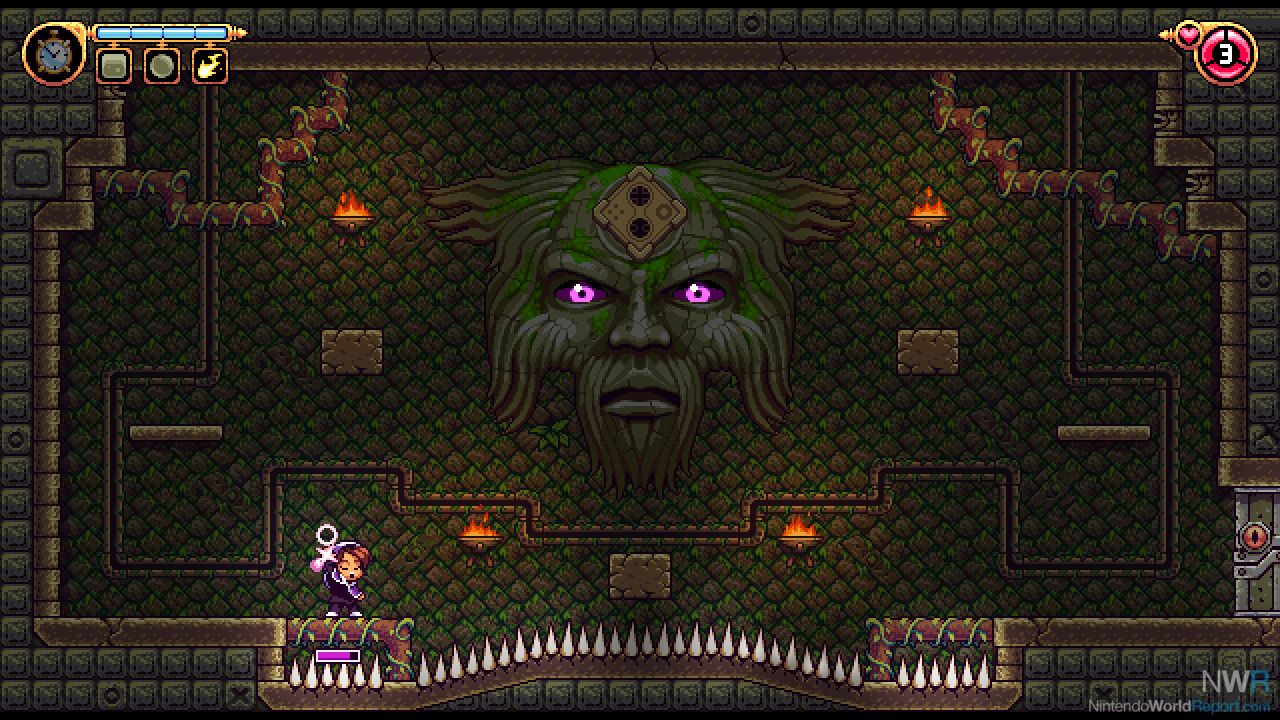 The team adapted in a day or two. Since we’re fully digital all the tools were already there, we already had everything on different cloud services and webcams etc. to do our daily standups. We had to buy an additional laptop to fully do remote work and me being a father to a 1-year old had to temporarily move his toys to another room so I could work from home. We unfortunately had two out of four members come down feeling ill as well, if this was COVID-19 or not we don’t know but we fell behind schedule the weeks they were home sick.

Many people might not realize this but shipping a game is a massive amount of work, the game needs to be finished but then you also have to make a trailer, screenshots, marketing assets and a whole lot of other things. We’re a small team of four and since my role was not only game and level design, I was also responsible for all the marketing and publishing. We’re self-publishing so we can’t rely on the help from a publisher and shipping on two platforms would not have been possible for us. We decided to make the Steam launch as good as possible and once that was done we’d focus on the Switch. Which is what we’re doing right now.

It hasn’t been long since we launched so it’s too early to properly reflect but this year has been one of the most challenging times in my entire life and I’m just incredibly proud that we managed to release Alwa’s Legacy and that it turned out to be a game that people really seem to enjoy a lot!

MF: If we got a chance to work with Nintendo we’d probably be too shocked to get any work done and we’d spend all day just saying to each other “Is this really happening?” and then the deadline would pass. Nintendo wouldn’t have a game to release and they’d be upset and yell at us. We wouldn’t want that.

But if we for some reason would have gotten any work done, I’d say it’d be interesting to delve a bit into Samus origin and her story. To be honest I haven’t played all the Metroid titles out there but I’ve played a few and I don’t think I know anything about her really. Let’s make a game where you play as Samus without her suit on and on her own planet doing her normal everyday routines. That’d be interesting!