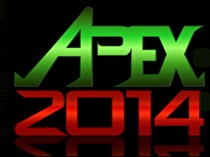 Apex 2014, an event held in Somerset, N.J. from January 17 to 19, 2014, houses one of the largest Smash Bros. tournaments around, featuring all three games (and even Project M) among a wide variety of other fighting games. We got the chance to talk with them about the tournament's history and much more in the interview below.

You can check their website out for more details and registration for the event, which has qualifying rounds going on now. In addition to every version of Super Smash Bros.  (with singles and doubles tournament for Melee and Brawl), Apex also features Super Street Fighter IV, Ultimate Marvel vs. Capcom 3, The King of Fighters XIII, Tekken Tag Tournament 2, Injustice, and Pokémon X/Y. It is sponsored by Megabus, OCReMix, Screwattack, Skull Candy, Smashboards, and more.

Nintendo World Report (NWR): What are the origins of Apex?

Johnathan Lugo (JL): Apex started as an idea between myself and Cristin DeSaro back in 2008. We wanted to have an event that brought together all of the smash games.  As time went along we saw that to help gamers we need to embrace all of gaming and we started adding fighting games and casual gaming to our event.

NWR: Can you detail a memorable moment (or moments) from past Smash Bros. tournaments?

JL: One of the biggest moments in smash history when M2K first lost a brawl national to Ally (from Canada) in 2009. This brought about the idea that on "Any given Sunday", anybody can win. I remember being there, and one of those things I loved about it was that everybody was cheering against M2K even though it was in the USA.

Another one was when Otori from brawl won in 2012. To see the emotion on his face. WHen he won, it was one of those moments nobody expected. He'd never won before, he'd never placed that high. When he won  he broke down crying. That was a special moment for me because they weren't playing for money. They were playing for the honor of being the best in the world.

NWR: What kind of turnout do you get? Are there a lot of spectators or do people just come to play?

JL: We get over 1200 unique entrants, and generally 200 - 300 spectators in person. This number has steadily increased per year. Last year, we had over 1 million viewers combined over all 3 streams for all 3 days, the record at that time. Alot of people generally just come to play. We welcome new people, so anybody is able to come, this is one of our main selling points.

NWR: Why do you think Smash Bros. works as a competitive game series?

NWR: What is your personal preference (Melee/Brawl) and why? Why not the other one?

JL: I think that each game has merit. I enjoy playing every version of smash equally. I like all of them, I support all of them, and I think each game is great on its own. I love to play all of them and have no preference.

NWR: Has there ever been any thought of the original Smash Bros. for Nintendo 64 being played competitively?

NWR: Have you ever run into any issues similar to what happened with Nintendo and EVO regarding Melee's appearance at the event this year?

JL: No. We have not had any issues thus far.

NWR: What do you want to see fixed/tweaked in the upcoming Smash Bros. game?

JL: I think one of the things that makes Smash enjoyable is the customization. That being said, I want to be able to make the game as fast or as slow as I want, to choose as many items or stages that I want. In regards to mechanics, I would prefer a middle ground between Brawl's speed and Melee's so that everyone can pick it up and have fun.

NWR: Do you think that the 3DS version will also be used for competitive purposes? Or do you think tournaments will be Wii U only?

JL: I do think that tournaments will be Wii U only. However, I do not think that the 3DS will be ignored. There may be possible side events, depending upon how the game works.

NWR: Do you still enjoy playing either game with items/final smashes on? Or do you only play it on the competitive level?

JL: I, personally, enjoy the game regardless of how it is played. Because I am a competitive player from my youth (Halo, etc.) I do think that is a little more fun to me.

NWR: Do you think that people who play it casually are still playing it right? Basically, is there room for both the hardcore competitor and the laid-back player?

JL: There is room for both. The game can be played multiple ways. I want the two types of players to intermingle to fully see the advantages that the games have to offer.

NWR: What are some of your favorite characters? Least favourite?

JL: My favorite characters: Marth, Game & Watch, Captain Falcon, Diddy.
Least favorite: I generally like all characters, but in tournament I want to avoid Yoshi's, Olimar's, and Peach's.

NWR: Were there any characters you felt were nerfed in the Melee to Brawl transition?

JL: They took much of Peach's abilities out, and fox could have been better, i.e. shine was not as powerful. Ganon too; he is no where near as good as his Melee counterpart.

NWR: What are your goals for the future with Apex?

JL: My goal is to continue creating an event, or expanding upon an idea, that competitive and casual players can attend. We want them to be at the event and cater to both to allow both to have a great experience, even if casuals enter the tournaments. In addition, we will be expanding this year to have a game room for casuals to simply come and play. We are in talks with a company to provide rhythm games like DDR to give people something fun to do. We also want to give people more of what they enjoyed last year like 'artist alley', indy game booths, and sponsor booths. We want people to enjoy themselves and be able to buy some really cool trinkets.

JL: I would like to invite everyone to come and attend. It is going to be a huge event and we want to make sure that everyone can enjoy themselves. As stated, we have multiple competitive games, casual games, and exhibits to cater to everyone. We are working with sponsors that cannot yet be named to ensure that everyone has a memorable experience at Apex.