5TH Cell Producer Brittany Aubert tells us how the new Scribblenauts is the best one there is. 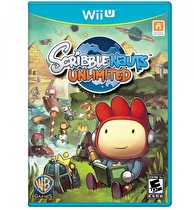 Check out the interview below for all about what the Wii U does for the series, word counts, the object editor, and "The Saurus Park."

Nintendo World Report (NWR): What sets these Nintendo versions apart from the phone/tablet version that will cost much less?

Brittany Aubert (BA): Scribblenauts Unlimited is an entirely new experience. We run on much more powerful hardware, so we’re able to do things like have beautiful hand-drawn HD levels and a crazy number of objects in a level at any time. We also have the precision of the stylus (on the Wii U and 3DS) and lots of buttons to allow the player to interact with the world in the way they feel the most comfortable.

NWR: Does Maxwell control any differently than in past games?

BA: We built off the Super Scribblenauts controls when starting to work on Unlimited. In Super Scribblenauts, the player had the option of switch between d-pad controls and stylus based controls. The 3DS and the WiiU have significantly more buttons than the DS did, so we’re able to provide both movement types without the need to go into a menu and switch.

NWR: How many words are actually covered in the game? Is there a literal count that you have?

BA: They actual number is our trade secret! But we literally have tens of thousands of words that can each have any number of adjectives applied to them, so already we had crazy amount of combinations. With the new Object Editor, players can create their own objects and share them for you to download in your dictionary. I guess you could say there are an unlimited number of words.

NWR: How do you address words with multiple meanings?

BA: We ask the player to clarify when they enter an ambiguous word. For instance, if the player enters the word ‘bow,’ we ask them if they meant a musical bow, a weapon, or a bow you would find on a gift. 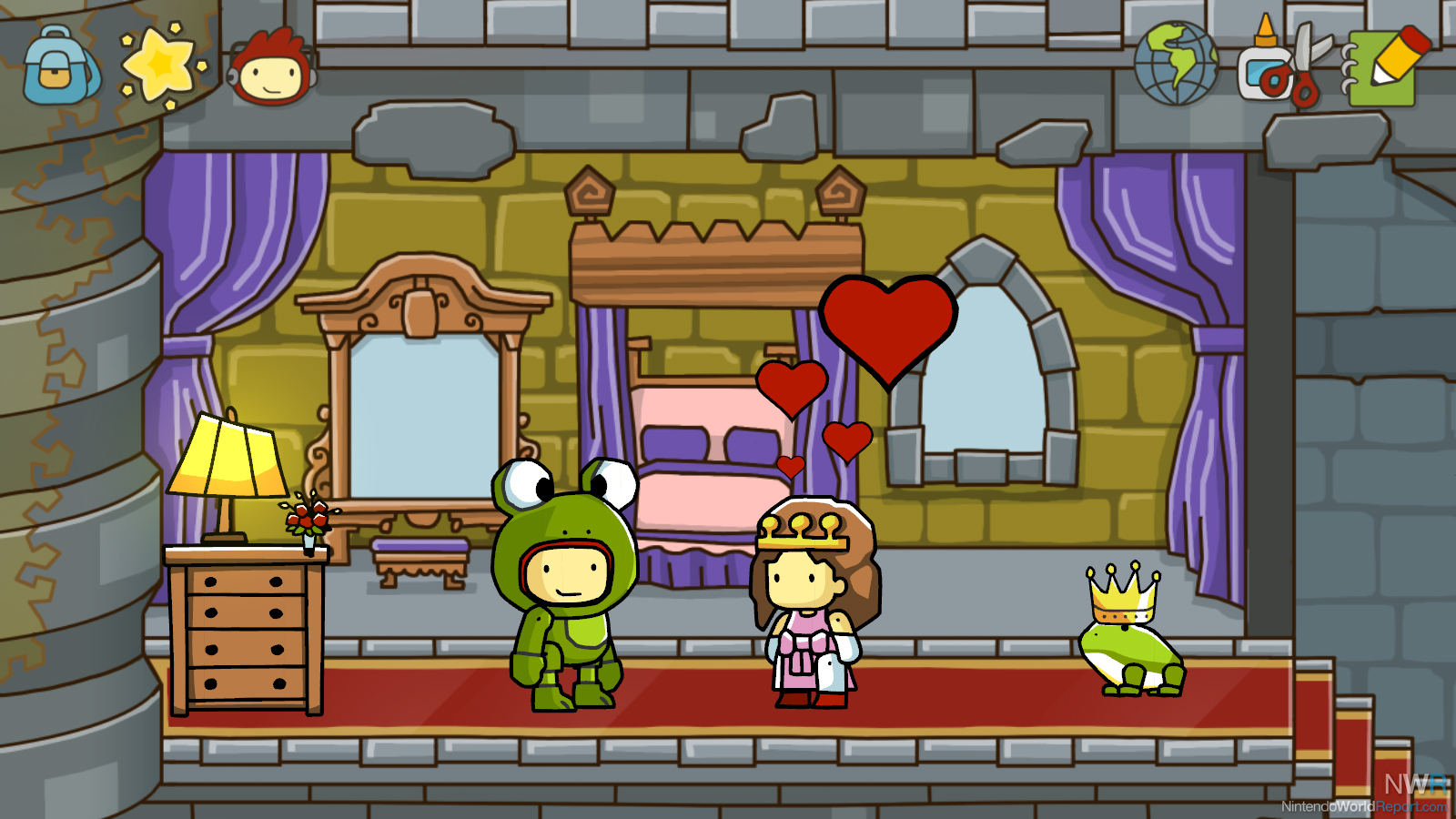 NWR: Scribblenauts was such an original concept on the DS, how difficult is it to inform players that Scribblenauts Unlimited isn't just more of the first game?

BA: Since Super Scribblenauts, fans have been asking how we can make the game bigger and better. With the first game we allowed players to summon any object. With the second game, we gave the power of adjectives so you can customize your objects. With Unlimited, we give the player a huge, open world, and the freedom of the object editor. They can use this tool to make any object their imagination can think of. The object editor is such a huge addition to the game, people really seem to be grasping that it’s not going to be another iteration of the original Scribblenauts.

NWR: With such a large vocabulary, when fans inform you of missing words, do you view it as an oversight, or more of fans looking for what's not there?

BA: We’re happy to hear when fans play our games so extensively that they find a few words we missed. We’ve always taken those words and added them to each new game. The fans are just helping us make Scribblenauts that much better. However, that is a very rare occurrence. Usually the words players think should be there but aren’t, are purposefully left out, such as profanity and other companies’ IP. For instance, a word like Band-Aid, although nearly a generic trademark, is actually the trademark of Johnson & Johnson. Most people don’t know that, though, so don’t understand why they need to use the word “bandage”.

NWR: Scribblenauts Unlimited has a narrative, was its absence from previous entries budgetary?

BA: The core focus of Scribblenauts has always been the objects, and we’ve spent the last two games focusing on those. But fans of the franchise have always asked about Maxwell, where he came from, and why he’s so interested in starites. It felt like the best time to introduce Maxwell’s backstory to the players.

NWR: Wii U is the first console to get a Scribblenauts game. Controls aside, has the machine's power let you do anything not possible in previous games?

BA: Absolutely! The hardware on the WiiU is far beyond what the DS provided. We’re able to have high resolution, hand-drawn environments. All of our object art is now vector art, so we don’t lose visual quality when we scale objects. We’ve done away with the budget thermometer from previous games and let players go wild and add way more objects to the level than they ever could. 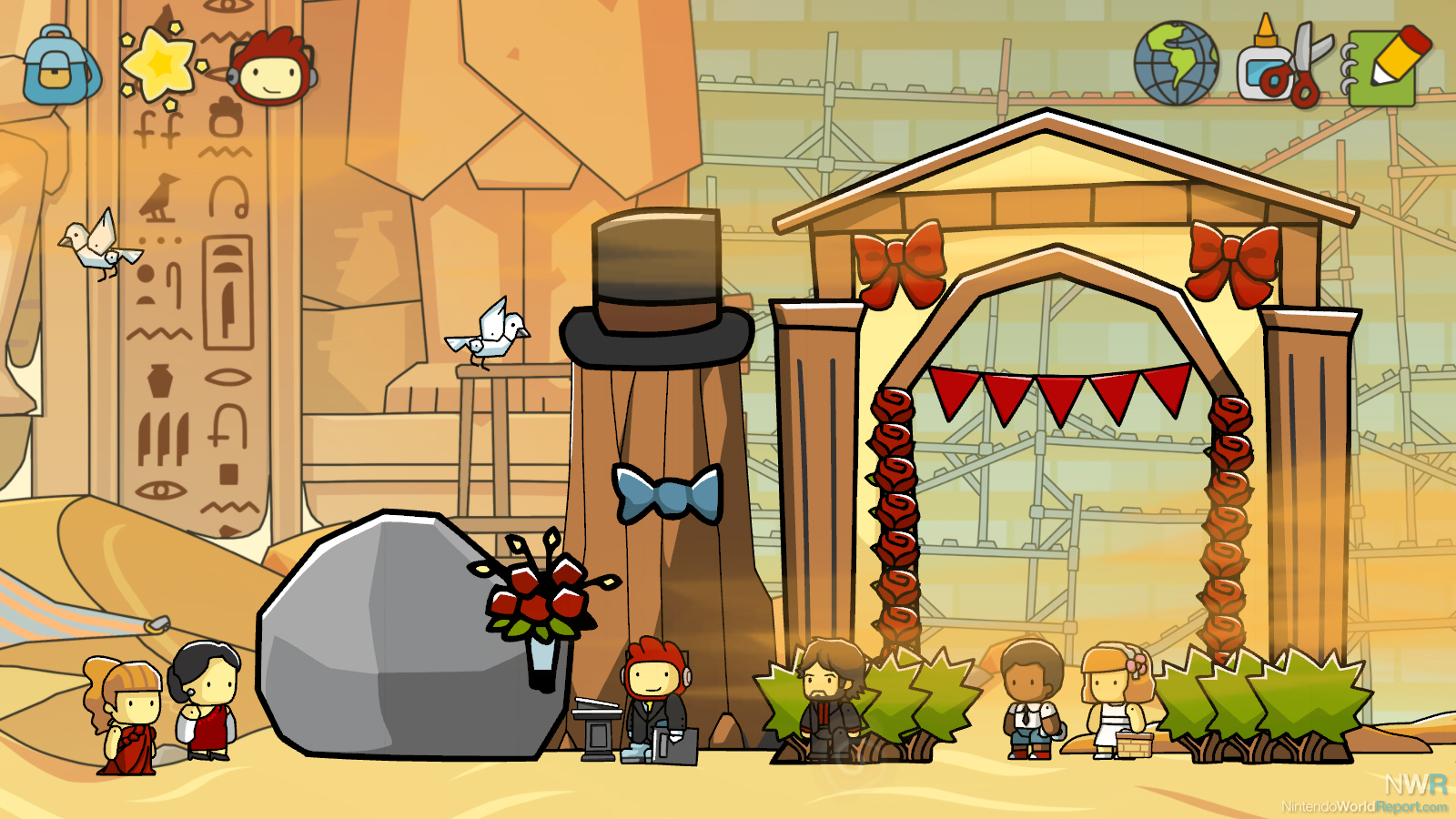 NWR: In your games before you've cleverly referenced great movies in missions (for example Back to the Future in the original). Are there any movies or shows you've wanted to throw in the game but couldn't for some reason?

BA: We’ve never been able to add copyrighted characters, but we’ve tried to create homages to our favorite properties. For instance, we have a level in Scribblenauts Unlimited called “The Saurus Park” that is a giant dinosaur park with lots of Jurassic Park references. There are a lot of easter eggs like this throughout the game, but it wouldn’t be as much fun if I told you about them all now!

NWR: With Scribblenauts Unlimited going as far as allowing players to create their own items, how do you see the series innovating itself further in the future?

BA: With Unlimited, we’re giving users the freedom to be as creative as possible, and we’re working hard to give them the best possible experience. Who knows what’s in store for Scribblenauts in the future, but for now we’re just excited to see the crazy stuff people come up with.

NWR: After the incredible word-of-mouth buzz at E3 2009, were your expectations for the original met? Are you still trying to live up to that wide-eyed adoration that E3 2009 brought about?

BA: E3 2009 was great! We had no idea the public was going to respond so well to Scribblenauts. We’ve been able to ride that wave and introduce more people to Scribblenauts than ever before due to the powerful word of mouth that E3 created.

NWR: After Scribblenauts Unlimited, what's the next goal for the series? What's next for 5TH CELL on Nintendo systems?

BA: You’ll have to wait and see.

BONUS QUESTION! (Editor's Note: We submitted these questions before the Wii U event last week where the Scribblenauts box art was revealed.)

NWR: We noticed a "Nintendo Network" logo on the game's box art. What kind of online does it have?

5TH Cell: Scribblenauts Unlimited will use the Nintendo Network to share objects created with the Object Editor.

I really enjoyed the last two games and want this one, but I want it to be portable downloadable version and I think the 3DS version is getting short end of the stick.

I would be careful with that, because 3ds version probably doesn't contain the Object Editor. As the Wii U version does. :-\