We take a look at one of the missions in the game, as well as the new "My Castle" mode and multiplayer!

Fire Emblem: Fates are a pair of games that have a lot to live up to. Considering the previous game, Fire Emblem: Awakening, was going to be the last one in the series unless it sold well, Fates is a game that shouldn’t have happened. Luckily, Awakening managed to greatly surpass all expectations, and we now have two games being released on the same day. Although these games are essentially two sides of the same coin, the coin itself is what’s most valuable. 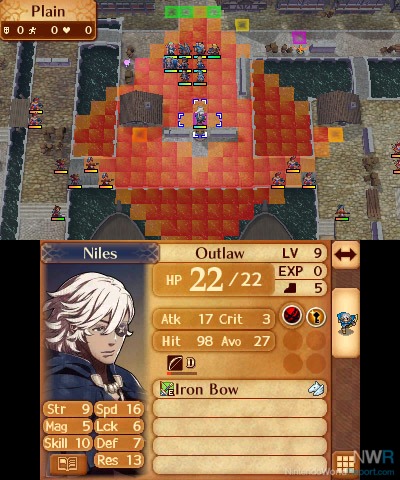 We each got to play a single map on each version of the game, Birthright and Conquest. The primary difference between the two versions is how the the story plays out via a decision your avatar makes on which warring faction to side with. In Birthright, you side with your birthplace, the Kingdom of Hoshido, and in Conquest, you side with your adopted home, Nohr. While this decision happens during Chapter 5, you actually make the decision when you choose to buy one of the versions. If you choose the other faction at Chapter 5, you'll need to buy DLC for that route. A third route, Revelations, is also purchasable, though we didn't get a chance to see this version.

In the Conquest demo, we were presented with a mission to protect your base from the opposing army, which arrive via ships. The game looks and plays almost exactly like Awakening, as you’ll still be moving each member of your team on a grid, pairing them up with one another to provide stat boosts, and watching fights unfold once you’re in range of an opposing force. Birthright plays similarly to Conquest, but focuses more on traditional strategy with a full complement of attackers rather than having to play on defense. The demo featured a castle take-down with enemies both inside and out.

One of the new additions to the battle system are enhancements to the game’s “Weapon Triangle”, a system that determines how much damage swords, axes, and lances will do against each-other. In Fates, bows and magic (which previously had no strengths or weaknesses in this triangle), and the newly introduced kunai weapons are placed into the triangle as well. Swords and magic do more damage against axes and bows, axes and bows do more damage against lances and kunai, and lances and kunai do more damage against Swords and magic. This definitely took a lot of getting used to after playing so much of Awakening, but did end up making things way more strategic, albeit stressful, and made me think twice about how and where we sent out my mages and archers.

While the combination of highly polished 2D and 3D art may be familiar, battles have been enhanced graphically, and the 3D in particular has been improved. The game transitions smoothly from the 2D grid layout to 3D battles, and new to this version, scenery is actually consistent between the views. You can also switch between first and third-person perspectives within the battle.

After going hands-on with the game, we attended a play session with a Nintendo rep, where they showed off some of the game’s new features. In Fire Emblem: Awakening, you had a general barracks, where characters would banter, share random thoughts, and more. This has been vastly expanded in Fates with a new “My Castle” feature. Outside of battles, you can come back to this castle and build a surrounding village using special points gained in the story mode. The village includes areas like prisons that hold enemies that were captured in battle, arenas that let you gamble resources you’ve collected, an armory and item shop, and more. There’s also a designated place to meet the avatars of people you’ve met via StreetPass where you can choose to battle their army in their village, or battle them on your own turf. If you’re feeling peaceful, you can also just visit their village and see how they set theirs up, and get an idea of how you can improve your own, as well as buy items from their shops that you might not have.

Fates is also compatible with the Marth, Ike, Lucina, and Robin amiibo. When scanned, the characters will show up in your village. After speaking with them a few times, you can enter a special battle against them, and if you’re able to defeat them, they will join your army. The Nintendo rep couldn’t comment on whether or not the upcoming Roy and Corrin amiibo would be compatible with the game. 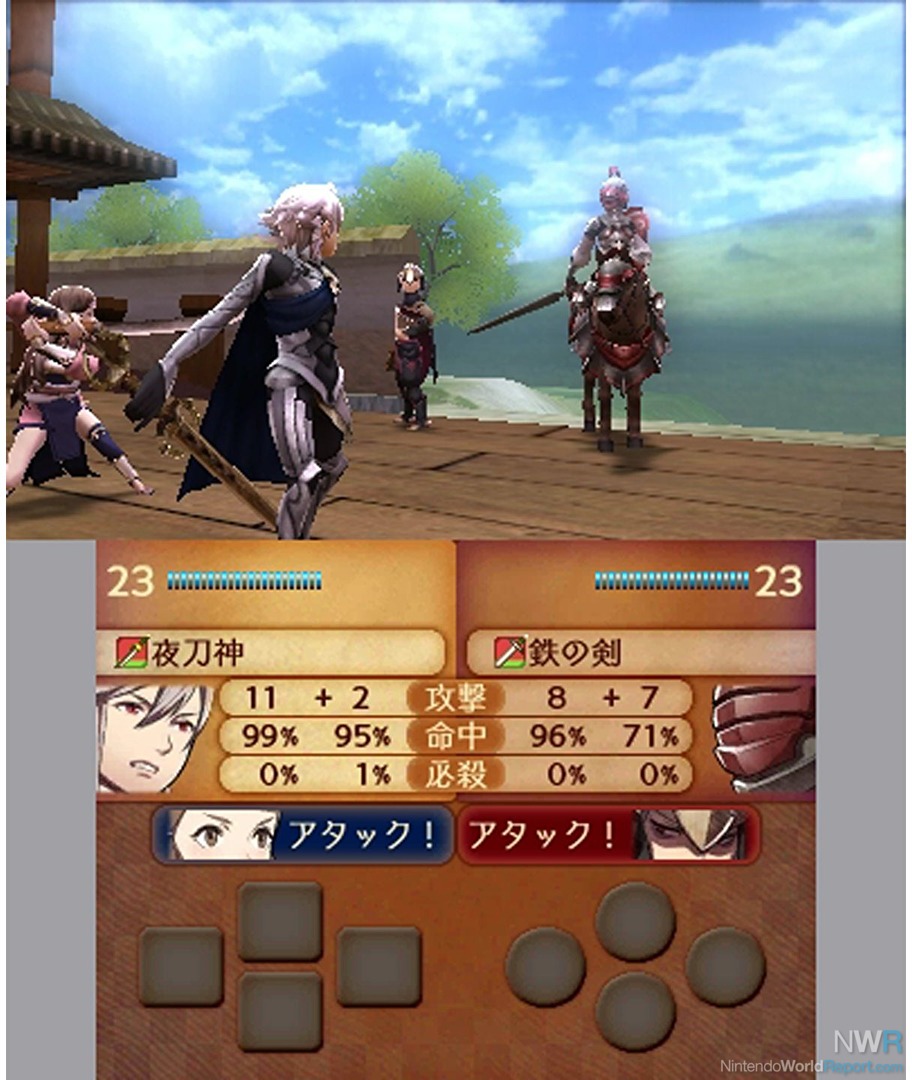 Fates also features a proper Vs. Multiplayer mode, both local and online, between two players. Each player can use their own army against one another and battle, or you can visit each-other’s castles, just like in StreetPass. You’ll also have access to the opposite game’s items and weapons via this mode. The battles work just like they would in the single-player campaign, but at a slower pace since both sides take their time planning out how and where to move. You’ll also be able to pair up your characters prior to the start of battle, rather than having to use a turn doing it on the battlefield. Players are temporarily leveled up to make battles more fair. I (Curtis) volunteered to help demo this feature, and everything seemed to work without a hitch. It did feel a bit weird to have to wait for each individual unit of the opposing army to move, but it did make it more suspenseful and personal, in a way. In the main story, the computer generally moves into the most optimal position and path they have, which can make some battles predictable, but playing against another person obviously adds more of a human element, and really encourages you not to just barge ahead.

Overall, Fire Emblem: Fates seems to be an absolute beast when it comes to content, even if it’s split between two different SKUs, and it looks like it’s going to be a worthy successor to Awakening. The game is scheduled for release in North America on February 19. 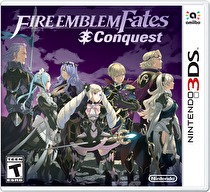