Try to flutter-jump away from the game's issues.

Let us come to a mutual agreement here. I know that many people are not very interested in Yoshi's New Island, and that is a totally reasonable thing to say. In the months leading up to its release, there hasn't been much news about it and the game so far doesn't seem up to snuff with the high standard of other Nintendo 3DS games. Even though there may be some merit in this opinion, I am going to start by saying that the game might not be as bad as some think. Sure, there are issues along the way worth discussing. That doesn't mean though that the game has no redeeming qualities and you might want to put it on your list of games to consider. 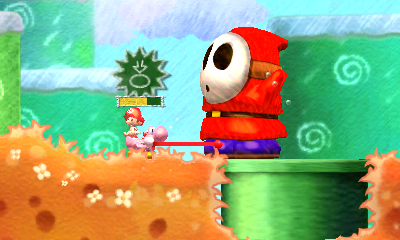 If you've played a Yoshi's Island game before, you'll know what to expect of the controls. Not much has changed in the basic structure and lovers of the green dinosaur will feel right at home. You can move about with the Circle Pad or D-Pad, swallow up enemies, jump with A and shoot your trusty egg weapons with the R-button. I actually do prefer using the Circle Pad, the tight responsiveness really brings the game home.

At first glance, the game doesn't seem all that interesting. As you begin the first level, you will get a crash course of all the game's mechanics and then you will be sent off on your merry way. The second level at first seems like more of the same, but then the title's gimmicks start to shine through and deepen the exprience. These transformations, much like the ones found in previous Yoshi titles, are all about using the gyroscope in wacky ways to get yourself through special sections of the course. The first transformation segment on display is the mine cart, and this actually has one of the more subtle control designs. As you tilt your Nintendo 3DS ever so slightly left and right, the Yoshi-cart will roll along the rails. Another one that proved frantic and fun was the drill, which sees you using the same subtle movement and mashing the A-button to break blocks in quick succession. These transformation powers are fine for the most part, but there are also a few instances where the gyroscopic control becomes a bit frustrating. A good example of this is the helicopter power, which requires a crazy amount of precision on the player's part. It becomes draining to use and it will take you some time to get hang of it. 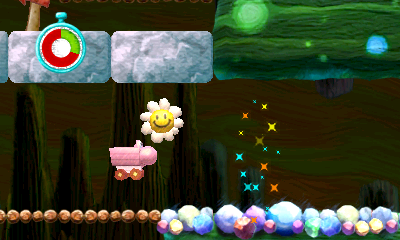 An new mechanic that is introduced to this game is the Eggdozers, which are gigantic eggs that have special abilities to help you in times of need. The Mega Eggdozer can destroy concrete walls and objects that you can't normally get past. Destroying objects in its path will also earn you additional 1-UPs. The Metal Eggdozer allows you to sink below the surface of water to grab goodies from the depths. As you explore the bottom of the water segments, your jumps become more buoyant, allowing you to reach new places. In addition to the new eggs, Yoshi can collect a Star to become invincible, and he can walk up walls and across ceilings much like Baby Mario could way back on the SNES. This new take on the ability is quite a satisfying in comparison to what they tried before.

The levels so far are quite straightforward. It is easy to complete a level in a number of minutes and feel satisfied with the accomplishment. There are branching paths to find hidden goodies, but the game never feels complicated nor overwhelming. This straight focus will suit people who are searching for their platforming fix, but don't expect anything too deep. That being said though, I am enjoying some of the levels so far. A good example is Level 4-1, titled ''Hop 'n' Pop Till You Drop'', where you have to hop on bubbles and balloons to get across large pitfall sections. World 5's opening stage, named ''Brave the Bumpty Blizzard'', sees you using penguins to bounce to high places. I also got to experience the two bosses from the first world. At the first encounter, you try to beat Kamek by throwing eggs at buckets. These buckets will fall down and drop on Kamek's head, which will weaken him. In the second boss, Kamek transforms a bean into a killer beanstalk and you have to throw eggs at the top to stop it in its tracks. These were clean and simple fun. 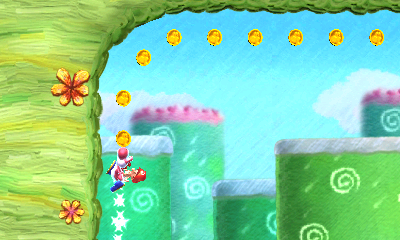 Even when a level doesn't stand out amongst the great moments in the game, that level can still be considered passable. I have not encountered a stage that I downright hated, and I have yet to become really frustrated with any level I've played. From what I have played so far, the game does not seem to be extremely challenging. Sure, I may have died on a level a number of times, but for the most part I went through the stages quite quickly. The real challenge is to find all the Red Coins and Smiley Flowers while keeping your star counter at the max of 30. Completing the levels 100% isn't mandatory, of course, but it does make the adventure more interesting. Collecting the Smiley Flowers will prove worthwhile; however, I am not going to reveal the secret rewards. If you are struggling with the game and die enough times, you will be rewarded with the Flutter Wings, which allow you to soar through the sky with an endless flutter jump. It's still possible to die while using them, however.

Yoshi's New Island offers 2-player minigames, in which you work together with a friend to complete certain tasks. These can be played over Download or Multi-card Play and they are nice, silly extras. We can reveal two of these today, Eggy Pop and Flutter Finish. In Eggy Pop, the team of Yoshis try to destroy a variety of balloons in a set time limit. The tricky thing is that the smaller balloons are worth more points, but they are much harder to hit. With Flutter Finish, both players get a chance to make the longest flutter jump possible while collecting coins along the way. In both games, the scores will be combined in one high score, which will appear on a local leaderboard. As these proved fun little diversions, I'm certainly interested in what else this mode has to offer. 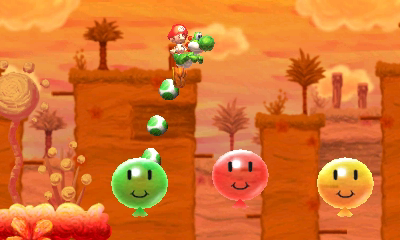 Yoshi's New Island looks surprisingly good on the screens of the Nintendo 3DS. The game's style is colorful and the characters have a lot of nice details to them. The backgrounds are more simple with abstract scenery, giving levels proper shape. The game looks lovely in 3D, though the layered effects aren't anything we haven't seen before on the 3DS. As far as the music is concerned, there are more reserved thoughts in order. Through most of it, one song is constantly remixed , and it doesn't hold up to other soundtracks of this generation.

Yoshi's New Island surprisingly seems pretty good so far. While the game might lack a challenge if you are going through it casually, the level design is straightforward and does not really seem to waste your time. The gyroscope stuff might become irritating though and lack of musical variety feels a little mundane, but it is nothing particularly annoying. There were levels that didn't grab me, but nothing was so terrible that I wanted to throw my Nintendo 3DS at the wall. It is hard to say how Yoshi's new adventure will fare in the long run, but at the very least, it is looking to be a reasonably decent platforming fix.

Playing through Yoshi's Island DS again in anticipation for this. I'm nowhere near where the game gets incredibly difficult. I'm sort of dreading that....


Anyway, this was a nice preview. It doesn't help my fears of the shoehorned in gyro controls, though.

The harshest thing about me losing original 3DS two years ago was that i had almost 100%-ed GBA Yoshi's Island.

Forget 20+ eShop games, that's nothing. That save though, i took me so much work to do it and i lost it all...

Which is exactly why New Island has never interested me. At best it's likely to be a good version of one of those games and I don't even particularly like the SNES original. So, In fairness to New Island it never really had a shot with me.

I do hope, however, that it scratches that itch for those who like the Yoshi's Island games.

Gyro controls, especially the kind that requires only subtle motions, seem like a major problem to me. It's a portable system, you'll likely play it in a vehicle. Having each turn or acceleration/brake of the vehicle screw your game up is a recipe for disaster. 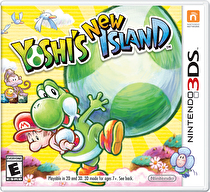