I played through the first hour of the US version of Bravely Default, which just barely scratched the surface of the massive game. It begins with a monologue by Agnès, which plays out in front of you using one of the game's AR cards. The four protagonists are then introduced through an extended sequence of seemingly unconnected movies. Agnès Oblige, the vestal of wind, prays in front of a giant crystal, which is suddenly consumed by darkness. She sets out on a mission to cleanse crystals from darkness along with her fairy partner Airy. Tiz Arrior’s village is obliterated by an unknown force, leaving him as the sole survivor. He is the first person you control. Edea Lee is a noble with sword-fighting skills who is sent on her first mission, which as it turns out, is to capture Agnès. Ringabel is an amnesiac ladies’ man with a special notebook that can predict the future. Coming from different parts of the world, these four eventually meet and team up.

Coming from Square Enix, the job system should be familiar to fans of games like Final Fantasy III, V, or The 4 Heroes of Light, the latter of which is especially reminiscent of this game. You can set both primary and secondary job classes, giving you the abilities of both; however, only the former will gain experience. The storybook-like art style is also similar to 4 Heroes of Light, and the light-hearted story telling and voice acting, despite the dark situation reminded me of a Disney movie. Particularly with the focus on a crystal as the source of power and stability, the game feels like Final Fantasy, but without over-designed characters. Though it takes place in a medieval setting, I saw a number of summons that were based on modern technology like trains and jet fighters.

The game’s odd name derives from its battle system. While Bravely Default is modeled after traditional turn-based games, it adds a new twist. Players can choose Brave or Default options in battle. Each character has a BP meter, which indicates how many turns you have banked and increments by one each turn. By selecting Default, characters will defend, reducing damage, but also add a Brave Point. Selecting Brave lets you take an action such as attacking, and you can plot multiple actions, one for each BP. You can also dip into the negatives, taking more actions than you have available (up to 4 at the beginning). If you choose this route, you won’t be able to take another action until your BP reaches zero. In this way, players can play with risk and reward.

It’s a bit like downing a triple espresso in the morning – you’ll get a burst of energy at the expense of tiredness later in the day. But with swords and spells. Bonuses are awarded for the quick dispatching of enemies, but overplay your attacks and you’ll be left open to devastation. Unfortunately, I didn’t get a chance to experience this strategy, or the job system for that matter, within the first hour since just attacking as much as possible was sufficient to defeat everyone.

Though it’s been a long time coming, the American version gains from refinements made to the original that smooth gameplay. Both English and Japanese voice and subtitles can be chosen independently. Additionally, Bravely Second, a mechanic that lets you stop time mid-battle and take an emergency turn. Oddly, Bravely Seconds are earned for every eight hours the game remains in sleep mode. They are also sold as SP potion microtransactions, which the game reminds you, uses real money. 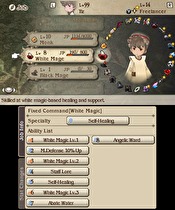 The demo (which involves a side quest that’s not actually part of the main game) is free on the eShop. Bravely Default also includes StreetPass functionality that allows you to share attacks that can be called upon in battle. StreetPasses from the demo can be brought into the main game.

Bravely Default promises around 90 hours of gameplay. Those looking for a deep and charming job-based JRPG should definitely take a look. If you’re interested in finding out more, check our review of the European version.

I appear to be at the last boss of the demo.  It has been a lot of fun and this has gone from off-my-radar to a day one purchase.


The big list of jobs was a bit overwhelming at first (also wasn’t sure if jobs affected stat growth or other attributes) but after playing around and earning some skills, it’s pretty fun. I like that you can also have a sub job class and access those abilities.


I was going to stop playing the demo and wait for the full game, but now I hear that there are bonuses that transfer over to the full game if you complete certain accomplishments…

I like that it is a sequel to Four Heroes of Light on the DS. I have a soft spot for that game.


This does feel overwhelming with all of the options off of the bat but I like the way they are using StreetPass.

Well I beat the demo last night and have all the bonuses that will carry over into the game.  Do I get the same starting jobs in the full game?  After developing strategy based on certain jobs and certain abilities that have been built up I might get thrown off starting fresh again.  Part of the challenge I suppose.

The last boss kicked my ass pretty good at first and it was quite a battle to defeat him.

I found the last boss easier then the Minotaur.

Depending on which last boss you're talking about...

The last boss is indeed pretty hard simply because of sheer amount of health.

The boss after the last one ;) is easy by comparison but still pretty hard.

"Do I get the same starting jobs in the full game?"

I don't believe so.  The full version of the game starts off a bit easier and you'll have to unlock classes by beating bosses.

This Demo just kinda throws a lot of what the game has to offer straight off.

Me, I'm off to face the Minotaur which really shouldn't give me much trouble since I have two full Black Mages at lvl 15 and he has a weakness.

Really need more streetpasses, I played most of the demo without going to the "village" section so during my playtime I should have had the villages making shops.

*enjoying* the hell out of this demo. 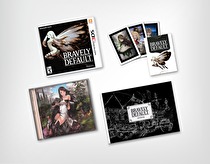