Who would win in a pointing contest, Professor Layton or Ace Attorney?

Right next to the sixth Layton game, Legacy of Advanced Civilisation A, was a second hotly anticipated Layton game, the long-awaited crossover with Ace Attorney that combines Level-5 and Capcom's franchises into one game. Despite never having played an Ace Attorney game, I can appreciate how big a deal this is, and how exciting it must be for fans of either franchise. 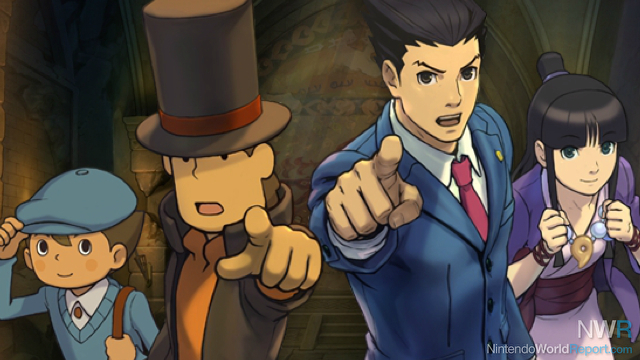 The first screen you see upon starting the demo gives you a very simple choice. Do you want to play the Professor Layton part or the Ace Attorney part? This surprised me a little, as I was expecting the game to intertwine both characters, swapping in and out as the story progresses. This could well be the case for the final game, but in this demo they were treated almost as if they were two separate games on the same cart.

I plunged right in with the characters familiar to me and was immediately taken to an eerie cut scene of Layton and Luke in a spooky old English mansion, accompanied by a girl called Mahonay (a play on the word Maho, meaning "witch" in Japanese). Mahonay is noticeably different in art style from the guys. You can tell she is from the Ace Attorney world, although I wouldn't say she looked too out of place.

The three are chatting in the room as a storm outside rattles the windows, with the music and sound effects being used to great effect to create an atmosphere. Suddenly, a white pigeon lands on the windowsill and starts tapping on the glass. Luke goes towards the window to let the poor bird in, but as he unlocks the latch, Mahonay screams out "STOP, NO!" The bird bursts into the room violently, transforming into a demonic monster and swooping Mahonay up toward the window while knocking Layton aside when he tries to help her. The scene was very freaky and completely awesome at the same time.

The first gameplay scene shows the very room where the cut scene took place, allowing you to explore and look for clues and hint coins. By this point, it is completely obvious that this is the Layton 6 engine in full effect, down to the controls, the 3D panning effect, and even the touch screen artwork. This was exactly the same as the game I had just played 20 minutes earlier.

The first puzzle was a variation of a classic Japanese pen-and-paper puzzle, actually first seen in New Super Mario Bros. DS as a mini-game called Mario's Slides. This version was much harder, though, as I didn't have complete control of where to draw the lines. Basically, you have to guide two different coloured witches to their respective castles. It sounds easy, but I had to use some hint coins before I could beat it!

Upon completion of the puzzle, I was taken to another cut scene, flying over Labyrinth City (read: London) in that classic Layton time period of "sometime in the 1900s, maybe". Layton and Luke are searching for clues for the whereabouts of Mahonay, this time on an old stone bridge (read: London Bridge). Scrolling and tapping around the scene, I found a secret entrance in one of the tower sections of the bridge. The gloomy atmosphere did not let up here, and the music continued to invoke an ominous presence in the scene.

The duo step carefully down the secret stone steps to find a room full of crates. They notice the feet of a woman hidden behind some, and discover it is Mahonay, tied and gagged (but alive).The rope needs to be cut, so a puzzle presents itself: you have to chose A or B, each referring to what the hidden part of the rope looks like.

With that puzzle complete, the game ends with Professor Layton thanking you for your time—a short but memorable demo for sure. But wait, there's more!

I actually had time to jump back to the main menu and chose the Ace Attorney part; the first Ace game to be presented with fully polygonal characters. Just like Layton, he has made the jump from 2D artwork nicely. The first cut scene shows a stupid but "hilarious" security guard patrolling some darkly lit corridors with his flashlight. He notices some people talking and other sounds coming from a room, and goes to investigate.

He opens the door and sees none other than Mahonay, who appears to have just battered another girl over the head with a metal pipe. Let the trial begin!

The next scene reintroduces Ace and Maya from the Ace Attorney games, in a familiar courthouse area. There is a lot of talking going on here. A lot (seriously). Hundreds of lines of text later we get to the court room, the judge is introduced, and the trial begins. I was presented with questions to ask the first witness, the ridiculous security guard from the opening scene.

What's apparent to me at this point is that the tone is so completely different; it really does feel like I've swapped carts out and started playing another game. Everything, from the music to the comedic overtones, is vastly different from my spine-chilling experiences with Prof. Hershel Layton just minutes before.

I'm very intrigued with how the story will fit together in the final game. I just hope the flicking between game styles and tone isn't as jarring as it was in this demo. That's not to say I didn't enjoy it immensely, though; I think this is shaping up to be an epic game, and at the very least a third Layton game to play on 3DS! 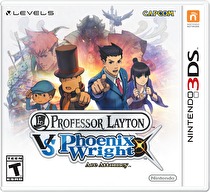