The demo is divided into three stages: a normal stage, a coin-loaded stage, and a castle stage. The normal stage was poorly designed given the available items: I was able to get the Raccoon Tail, but the stage didn't have any verticality. Cheep-Cheeps pop up from the shallow water below and there was no point to having this new item. It was hard to hold onto for more than a few seconds. Notably, jumping on P switches turns the Cheep-Cheeps yellow, and they start dragging a line of coins behind them. So this is the first instance of coin-collecting madness. Then it's off to the coin-grabbing stage, where Mario collects a gold Fire Flower, which gives him the Midas Touch. Everything Mario hits with his gold fireball turns into gold, be it organic or inorganic. And it's not a timed weapon, so assuming you don't get hit by a Koopa or something, you can collect coins to your heart's content. This was surprisingly engaging, but unless the game has leaderboards or specific challenges, it's not really much of an addition.

Finally, the fortress stage was similar to others of their ilk in the NSMB franchise: largely vertical, a few areas where you have to pick between one or two routes (one of which inevitably leads to a Star Coin), and a miniboss at the end. There were a few new ideas: Dry Piranha Plants, for instance, and relatively difficult-to-find Star Coins. The real surprise, though, was seeing Reznors as the miniboss. Instantly brought a smile to my face!

I don't know if I actually enjoyed NSMB2. It felt like I was going through the motions, especially compared to NSMBU, which is obviously the better game. Of course, NSMB2 comes out sooner (August) and it's going to be a digital download. Nintendo didn't say anything at the conference about system-software locks, so I'm a little nervous to go the Shiny Digital Future route with 3DS games, but still, it's tempting. I'm sure the game is well-made and plays great, but I need to know more about it, especially whether there will be leaderboards or some way to compare your coin scores to your friends. This feels like a competitive game (and not the awful single-screen co-op) and if it's done right, it'll be pretty great.

Wow. This might be the first mainline Mario game that I don't buy. I've yet to hear or see anything interesting about this game.

Did I somehow play a different game from everyone else? I was way more impressed by 2 than U; U was basically the exact same game as the Wii one unless you had the tablet and at least 2 is trying something new with the coin idea.

I agree. I am somewhat more excited for New Super Mario Bros. 2 than U. The coin idea actually sounds interesting to me. If they make it competitive to see who can collect the most coins, then I'm definitely going to buy or download this title. I also think that the New Super Mario Bros. series is better suited for being a handheld game, although that is just my opinion.

Watching the Iwata Asks for the game on the Nintendo Channel turned me on the game. I like the design philosophies being shown. Yes, the Wii U iteration looks much more impressive, but the 2D Marios continue to come across as comfort food gaming fun.

it seems like a one trick pony and the single trick isn't that interesting.


Maybe if it was a WARIO game I might care because it makes MORe sense for him but still it just seemed rushed. I will have to be proven into buying this. I hope they don't automatically give it high scores cuz its mario.

Just a quick poll for the room ...

A) Nintendo has finally made a boring Mario game.
B) There are secrets, twists, layers of goodness that we probably won't fully know about until we play the game.

Hey, I'm completely sold on this one. Hopefully Coin Rush works online as well as StreetPass; if it does, this game could be really great.

I'd just like to point out - the box art for this game features the Nintendo Network logo. :D

That could mean any number of things, but I'm hoping that's part of it.

I'd like to give Nintendo the benefit of the doubt and just assume that NSMB2 has layers of complexity and hidden value that they're just not showing us yet, but the truth is that they've failed demonstrated this. Based on what I've seen and what I've heard from impressions like these but also from Nintendo themselves, it seems like NSMB2 is just another NSMB game except with a new focus on collecting coins, which doesn't sound interesting at all to me. I'll reserve judgement for the time being, but this is the first time that I've found myself bored by a newly announced Mario title.

This was discussed, I believe, during one of the live video feeds we did. With the huge emphasis on gold and getting as many coins as possible, it would have made more sense to have the character models as Wario and Waluigi instead. While that would have been awesome, I'm still uch more excited for this game than for the Wii U version, especially since it's borrowing so much from the old games. Koopalings again (YES!), the return of Reznor, the tilting blocks from the NSMB Wii... and the Golden Fire Flower is hectic but very fun to use, and must be done strategically, there's one point in the demo where if you turn too many bricks into coins, you lose access to a platform necessary to reach one of the Star Coins, which seem much more cleverly hidden this time around.

From the impressions and video coverage, I'm certainly gravitating towards U over 2, although saying that, I will likely end up with both before the end of the year - I do like me some 2D Mario.

I mean, we've only seen 3 levels for both of them, so it's difficult to pass judgement, but U seemed to have the more interesting suits/power-ups, the secrets were cleverly hidden and there has been a tangible boost in the production values. I noticed in the videos that U has entirely new music, whereas 2 had literally ripped tracks straight out of the Wii game. This could be placeholder (at least, I hope it is), though given that 2 is coming out in just a couple of months, that's an odd thing not to have finished.

The emphasis on coins could prove to be significant, I will give it that. It depends on how far they go with it in terms of, like you said, comparing coin scores or playing modes where you compete for the most coins.

Not much of an issue for me... I don't plan on buying a Wii U for at least a year, so I'll be picking up NSMB2 regardless, and by the time I play NSMBU, I probably won't mind any similarities.

I did note that the official trailer for the game had a somewhat remixed version of the main theme, so I sincerely hope that the tracks in the demos were just placeholders. It just seems very unlike Nintendo to recycle music tracks like that.

For NinSage's question, I'm going with b) since this is the only 2D Mario game the 3DS is getting, and it has to have enough hooks to sell for 4-5 years consistently.

But I would bet a good deal of money NSMB 2 is better than that.

I guess I am in the unique position of being pretty excited about this game. I missed the New Super Mario Bros. DS boat completely and never played the Wii version in its entirety. I will be surprised if I end up with a Wii U anytime soon, so this looks to be my 2D Mario fix! And it looks serviceable at the very least. I am also slow to judge because 3D Land looked pretty boring before I played it and subsequently fell in love with it.

There's a demo, with two representatives, that was recorded at the press conference that shows
that the game does have features akin to leader-boards. By making use of street pass one can
exchange coin collection data with other players apparently.
Do any of you guys know whether or not the game looks any better than the DS ones.
I find it hard to trust off-screen game play videos as they can be misleading.

The one video we have on the site is of me playing it, and honestly, the game looks like a New Super Mario Bros. game. It looks sharper than the DS one, but pretty much the same art style. If you're okay with that, then yes, it does look better than the DS one.

We know that the leaderboard type thing is there for StreetPass, but I don't think it would be fully realized, at least outside of Japan, unless it also had online functionality. As some have pointed out, the box art does have the Nintendo Network logo, so hopefully that means it is there. 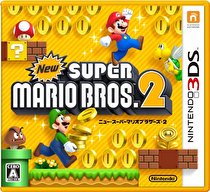