While my colleagues were filming an interview with Epic Mickey: Power of Illusion's director Peter Ong, soon to appear on our YouTube channel, I had the chance to get my hands on the demo of the game and let me tell you: Power of Illusion really shows off the 3DS's 2D chops and sets the bar high for all of its competition. 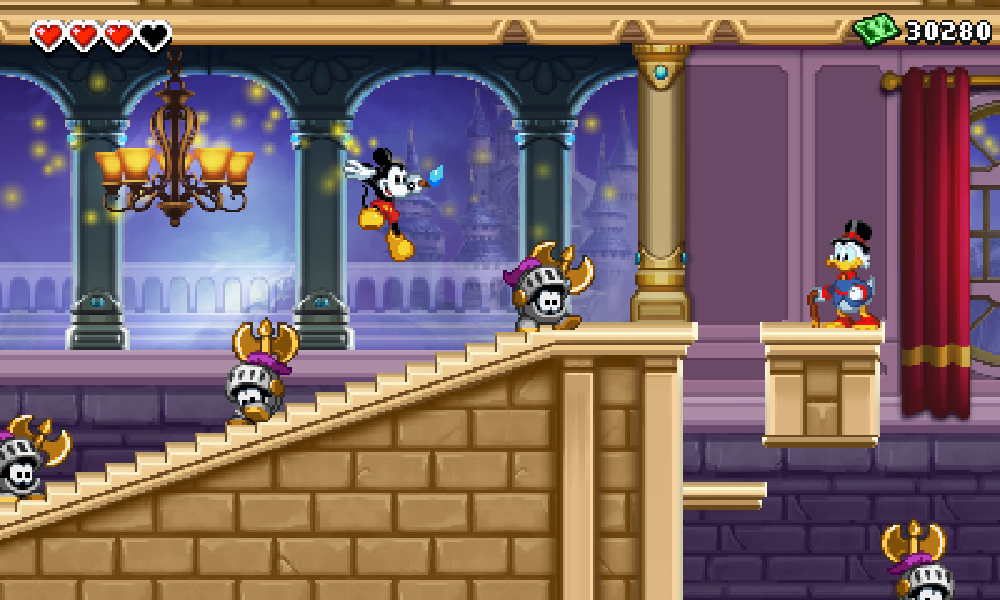 Don't get me wrong, the system has seen some solid 2D visuals, from Mutant Mudds blocky retro look to Mighty Switch Force's detailed characters, but I have not seen a game that looks more delicious than the high resolution sprites of Disney's characters. The 3D effect adding depth to the background only makes the title more pleasing to look at.

Mickey's abilities were gradually unlocked over the course of the demo. Initially, you can only jump, and the way you dispatch enemies is by pressing the jump button a second time in the air to butt-stomp them. Hold the button down while doing so and you will bounce extra high. You can combo several enemies by keeping the bounce going, which should reward you with better item drops (paint for your brush, and cash to buy upgrades). You can also decide to wait until the last second to press the jump button a second time and if you time it right, you will dish out a more damaging attack. Another attack you unlock, a spin move, allows you to break certain obstacles in your path.

You soon unlock the paint and thinner abilities, which have you keep an eye on the bottom screen to see phantom platforms (or characters...) that you can draw into existence, or obstacles in the game's world that you can erase. Take out the stylus, touch the item on the screen, and either start tracing the outline or rub out the silhouette that is there. You don't have to be very precise to succeed but if you do try to do a good job, you are rewarded with a powered up Mickey whose spin attacks last longer, among other bonuses. It reminded me of the way doing particularly well in the puzzle part of Henry Hatsworth pays off in the action part. 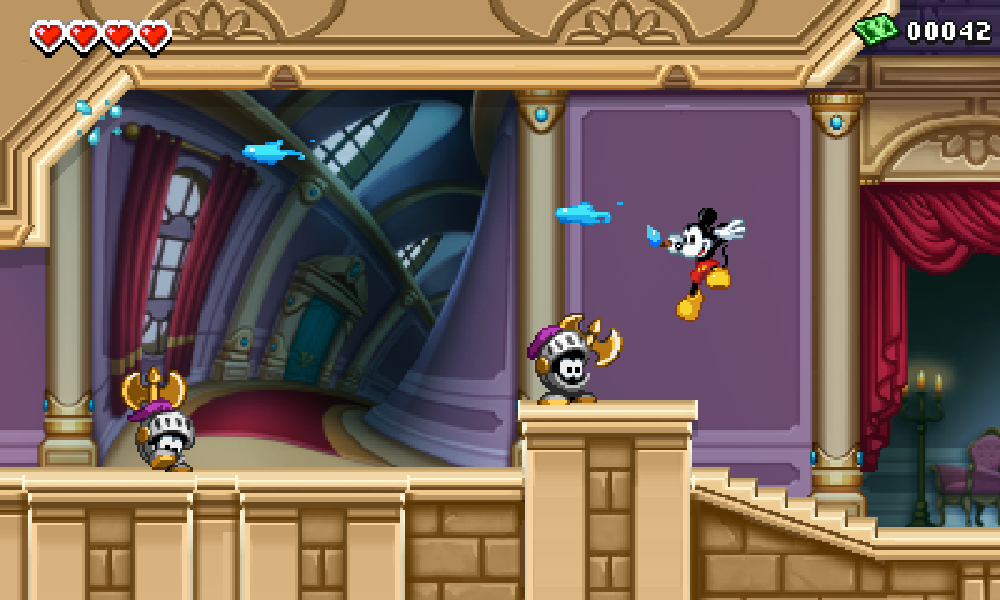 Mickey feels floaty and does not run fast, and bringing up the paint/erase screen which pauses the action can make the game feel even slower than it is, but at the very least, most of the interactions involving paint and thinner seem optional. You COULD erase a cannon on Captain Hook's boat shooting a stream of projectiles at you, OR you could decide to do things the old-fashioned way by simply timing your jumps well.

The levels are meant to be revisited and explored thoroughly. As you go through them the first time, you will rescue classic Disney characters and send them to your own fortress where they will give out quests. Scrooge might ask you to find his lucky dime in a level you've already visited. The representative could not tell me how many characters will be in the game, as they are still in the process of adding more.

Power of Illusion left me with a good feeling. The emphasis on exploration and the colorful visuals are right up my alley, and there seems to be enough nuances to the gameplay to give both young children and platforming veterans something to sink their teeth into.The Agrabah Market setting the end of the demo teased me with only left me wanting to play more.

The game is set to be released later this fall.

I'm excited to see more of this game, but I really hope that it's not as brutally difficult as Hatsworth. I adored Hatsworth but it was difficult in a really frustrating way. To this day I still haven't finished it.

3DS is looking to get some fun games! This is at the top of my list!

im really looking forward to this game. the graphics give me a strong sense of nes nostalgia.

I'm so happy a game like this still exists in today's marketplace. All those people complaining about the gun-heavy violence-laden press conferences this year should take a look over toward Epic Mickey, NSMB, Pikmin, NLand, Scribblenauts, in addition to all the yummy indie stuff that apparently was at E3 but was barely reported on. 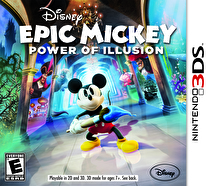