No, this is neither a Transformers game nor a music album.

Luigi’s Mansion 2, now known as Dark Moon, made its second E3 appearance. The gameplay remained mostly the same, but the new demo was bursting with personality.

There were three mansions on display. The first one, shown on the show floor, was in the same stage seen in the demo from E3 2011, albeit abbreviated and tweaked over the past year. Luigi must chase down some prankster ghosts, finding himself the rube in several slapstick comedy routines. A favorite of mine was a scene in a bathroom. Luigi peeked inside the bowl, and was hit in the head by a closing lid. He then sat on the porcelain throne, resulting in the triggering of a traditional secret passageway in which the wall turns… and flung him head first into a sink full of water. Luigi also bumbles about and talks to himself when he finds an upgrade for his vacuum (the stun light). Next Level Games clearly spent a lot of time thinking up shtick, and overall the demo had great comedic timing. 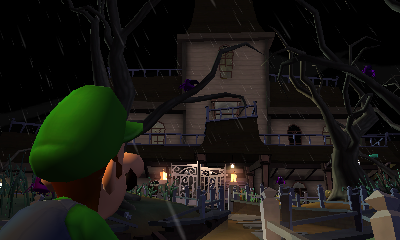 The other two mansions, only on display in Nintendo’s backstage area, seemed less polished. One mansion had a clockwork tower, in which Luigi had to spin the dials of a clock-themed puzzle. Although the puzzle itself was straightforward, I had trouble using the vaccum to manipulate the dials, and I eventually gave up. The third mansion had a snowy alpine theme. The first mansion room was very chaotic, with a few ghosts wreaking havoc while a haunted bear rug scared Luigi whenever he got close (making it very difficult and painful to wage an effective attack)! I eventually got stuck on this level as well, this time in an ice rink arena in which it was not clear how to proceed.

Overall I had fun with the Luigi’s Mansion: Dark Moon demo. Based on what I saw, Luigi fans such as myself will be delighted with the scenarios and antics. However, concerns linger regarding the preciseness of the final games’ controls and obtuseness of its puzzles.

So how does it control exactly? The first game was all about showcasing a dual analog set-up, but I can only assume it is being handled very differently for the 3DS game. Is there a fair amount of auto-targeting or something to that effect?

I see this game using the Circle Pad Pro to retain the dual-analog setup from the GameCube game. That's how I want to play it anyway.

The controls are pretty the same as last year; there was no sign of circle pad pro support, though the face buttons are used like a crude analog stick (or the gyro) for aiming up or down, so it's possible the final product will support it. 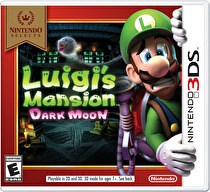