After some time with this game's unique real-time battle system and fast-paced character-driven story, I understand its inclusion in Operation Rainfall.

The Last Story isn't the kind of RPG in which you start slowly. Within minutes you're using cover, slaying reptids, magically blasting pillars, and tactically planning fights before starting (and finishing) them.

No, the Last Story is an action RPG, and seems to take the action part seriously. Fighting occurs in real-time: enemies climb down walls and party members chase them around the rooms, spells and attacks are charged and interrupted, and when you enter a first-person mode to snipe distant enemies, they keep shooting back. I bet this is the kind of game my father envisioned as he claimed to not understand what I saw in the turn-based Final Fantasy III on my SNES.

The Last Story saw a European release earlier this year.

Part of the reason I was so struck by The Last Story's battle system was that within two fights I felt like I could already run circles around my opponents. I could press the A button to take cover around corners or behind obstacles to draw less attention to myself, or I could run around the room and deliver fluid basic attacks to nearby enemies just by directing my character with the Nunchuk's analog stick. I could press B to either enter a defensive state of blocking, or acrobatically vault over and across battlefield obstacles. The Z button entered a first-person view from which I could snipe enemies (the game registers headshots for increased damage!), or find targets of interest and/or destructible terrain for my computer-controlled party members to handle. The C button activated the battle system's main feature, Gathering. Activating this power slowed all enemy movements, but turned their attention and hostile intent toward me instead of my party members.

This tactic turns what might have been a hack-and-slash experience into a game of tactical positioning: you might draw enemies toward a magical ring (within which your allies gain attack bonuses), or you might pull an enemy's attention to yourself instead of an injured party member. This positioning mechanic might also add puzzle-like elements to future encounters. The first boss-like monster I met, for example, simply did too much damage to my party unless I held his attention on myself, keeping him busy by moving around the room (a tactic known in MMORPGs as "kiting"). A later encounter had me serving as a decoy for a tiger-like monster, drawing it away from NPC children one of my computer-controlled allies attempted to rescue. 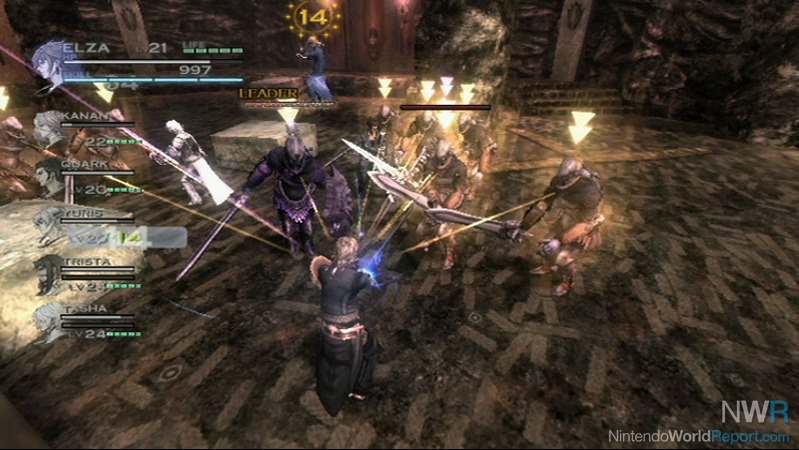 Faint blue lines show how all the enemies are suddenly focused on you when you use "gathering."

Additionally, before a battle starts you have the option of viewing the entire playing area from a top-down view. This is gives you a chance to see the 3D environments in which you're fighting, what enemies you face and their positions, and decide how best to attack them. For example, one of my first battles was designed so that if I snuck around an enemy group before engaging them, I could dispatch their healer in a single shot and remarkably shorten the resulting scuffle.

That battle-planning element is key: there were fights in the game in which I died multiple times. Fortunately, The Last Story gives every character five lives during battle. The main character is automatically revived when downed, but you'd need to activate the Gathering power to resurrect fallen allies, as long as they too had unspent lives. 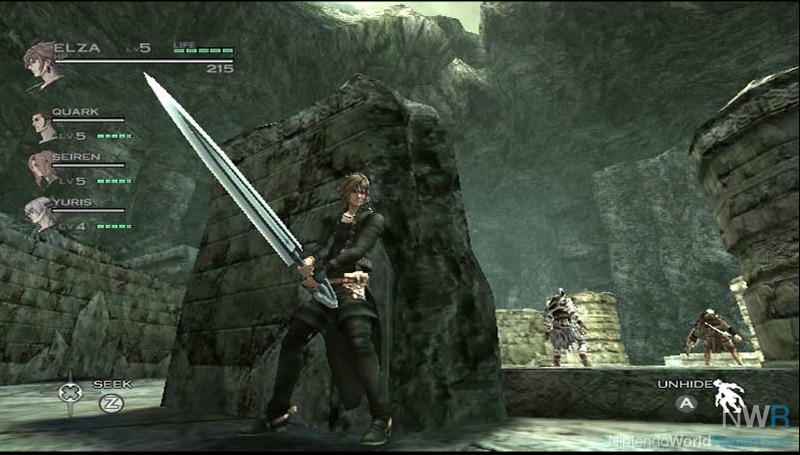 Proper pre-battle planning, and some stealth, can help you get the jump on enemies.

But if all that is the "action" component of this action RPG, what about the "RPG” part?" Just as the battles in The Last Story are fast-paced, I got the impression the story in the game was tightly woven and had a similar speed. I was told the game attempted to be very character-driven in the things that happen, which I can well imagine given the group of opinionated, diverse, and colorful characters it features.

For example, Syrenne, the tomboy of the group, enjoys fighting so much that she describes the city's battle arena with phrasing and tones better suited to a bordello. And Lowell (who is surprisingly well-muscled despite being a magic user) professes that he's only following his father's advice when he flirts with every girl around. Every girl, that is, except Syrenne, since Lowell claims to "only like women." (At which point Syrenne throws a chair at him.)

A European trailer focusing on characters and story.

I have to admit that I didn't get to listen to the voice work that will be in the American version of the game; the sounds in the demo were turned off and probably wouldn't have been audible against all the commotion of the demo event. However, I do look forward to hearing my fire mage, Yurick, express his disdain for the rest of the group's general carousing and "breaking things."

A person seated at the other demo unit had been able to play far past the beginning, which afforded me the opportunity to see events from later in the game. I now know I can look forward to battles against big, angry monsters chained to pillars, scrambling to a room's side ledges to escape rolling attacks, and being chased through the game's main city when my party meets another main character. (Actually, since you can throw fruit on the ground for wandering city NPCs to slip on, I'm curious to see if that can afford an advantage during that part of the game...) 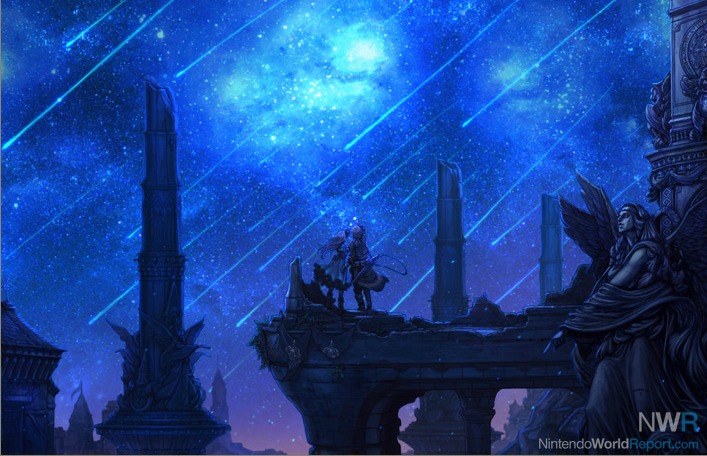 I didn't get far enough in the demo to trigger the meteor shower scene, which the game's XSEED handler described as one of the game's prettiest moments.

Frankly, the game was a surprise for me, for both its promise of character-driven story and potentially epic battle system. I was pleased to hear that fan pleas for the game to receive a North American release would be answered later this summer, but I didn't really understand why I should be excited. Now I know.

I really enjoyed The Last Story, but I felt like it only really demonstrated the depth and complexity of the battle system towards the end of the game. In fact, I would go so far as to say that it was only with the final boss that the game's various mechanics really come together. Throughout the majority of the game I didn't find myself having to use many advanced tactics. I often would use these more complex systems just because they were fun, like bouncing off walls and landing on spell spots to cause status effects and buffs, but it was never really necessary. I'd love to see a sequel which would start where The Last Story left off, because the battle system was pretty cool.

and all the rpgs turn out great

See, this is why I love role-palying games. There really are so many ways one can make a player "playing the role" of a certain character or number of characters, and I think we've settled for these stagnant, non-action-y examples for too long. Yes, the Last Story is numbers based and tactical, but on a whole different level in comparison to Final Fantasy, Xenoblade, and other role-playing games. I love this genre so much. 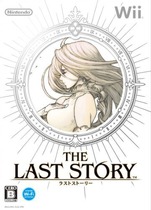