The new Sonic game on 3DS looks like a blast...a Sonic 3D blast.

I first played the 3DS version of Sonic Generations back at E3. I thought the Dimps-developed game looked good, but noticeable slowdown had me a bit worried about the final product. After playing the title again at a recent Sega event in NYC, I was impressed by the steady frame rate, sharp 3D visuals, and classic Sonic gameplay. 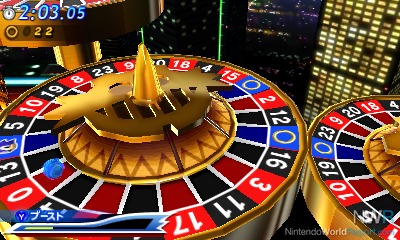 As in the console versions, players get two unique maps for each area; one designed for classic Sonic, and the other for modern Sonic. It is important to know that all stages in the 3DS game are 2.5D, with the modern Sonic levels playing more like previous portable titles such as Sonic Rush.

Sega had two new level areas on display in the demo I played, Emerald Coast and Radical Highway. The sunny beach area known as Emerald Coast first appeared in the Dreamcast game Sonic Adventure, and might be best known as the stage where the giant whale chases Sonic and destroys a wooden pier. Emerald Coast on 3DS does an impressive job of translating many of the 3D stage elements found in the original stage to 2D. Not only does the classic stage music blare through your 3DS speakers, but Sonic will once again run sideways on a wall, use orange glowing teleport panels, and be chased by the giant Orca.

Radical Highway, which first appeared in Sonic Adventure 2, is also well represented on the small screen. The city skyline in this stage is prominent in the background with nice Easter eggs like a blimp floating in the background that says “Got Rings”. The highway Sonic runs on goes through some crazy spirals, and overall all the action looks very nice in 3D. I only encountered a single moment when the frame rate dropped, and it was only for a few seconds. Overall, the game looked and ran great, as a Sonic title should. 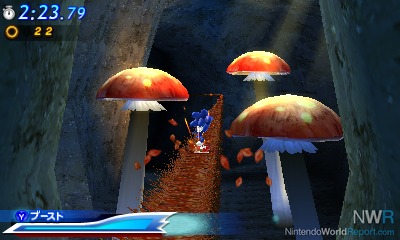 The bonus stages will be instantly familiar to anyone who has played Sonic Heroes. Sonic must run through a large tube and smash as many balloons as possible if he wishes to collect a Chaos emerald. This is one of the few sections of the game that will have behind-the-back Sonic gameplay.

Now that I’ve had the chance to play a number of the game's stages, I have to say the level design seems very solid. The classic Sonic levels do a good job at mimicking the feel of the old Genesis titles and have plenty of spin dash fun. However, one strange thing that may annoy some people is that Sonic will be able to use the Homing Attack in at least some of the classic Sonic levels. Using the Homing Attack is the same as in previous titles, with Sonic simply needing to hit the jump button again while already in the air. The big change on the modern levels is the inclusion of grinding rails, the ability to boost with the Y button, and some notable attempts at dazzling the player with its 3D effect. I was particularly impressed by the 3D in the Mushroom Hill stage, which featured Sonic moving from the foreground to background in a similar manner to Wario Land on Virtual Boy and Donkey Kong Country Returns.

I’ve had a strong fondness for Sonic since his blast processing days on the Genesis. Do I think Sonic Generations will be as good as Sonic 3 & Knuckles? Nope. However, Sonic Generations on 3DS is shaping up to be a great new portable title that delivers nostalgia for the series' longtime fans, and fun for all.

I added some video of Sonic Generations that I took at NY Comic Con to the article.

Wow that looks pretty fun. I hate auto boost but at least there was allot of stop and go in modern sonic. I actually think this and the console version will turn out pretty good.

this looks pretty fun, i'll probably get the 3ds version if/when i get a 3ds since the Dimps handheld versions are usually the better releases.