After watching Masahiro Sakurai give a long stage presentation about the new Kid Icarus game, I couldn't help but be excited to get my hands on it. Luckily the first-ever playable demo was being shown just a few steps away.

During the wait, there were several screens showing a rather entertaining video explaining the background and history to the Kid Icarus games. It had some humourous banter between the main man, Pit, and the ethereal goddess, Palutena. They explained it's been almost 25 years since the original Famicom release, and that Pit might even meet monsters found back in that original version. It was then explained that there are two options in the demo, easy or hard, both presenting you with entirely different levels and bosses. Most people opted for the easy stage, which had Pit flying through clouds and shooting waves of enemies with the stylus and R button. 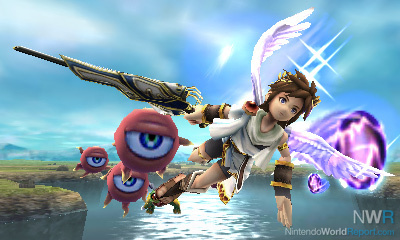 I, however, really wanted to see what the ground combat and dodging mechanics were like, so I opted for hard mode to check them out first hand once and for all. The slide pad is used for movement around the level, as playfully explained to me in the video beforehand, dashing is achieved by smashing and holding the stick in the direction you want, just like in Smash Bros. It felt a little awkward moving Pit around, as it felt a little sticky; he was either walking too slowly or running at full speed. The slide pad is also used for evading, and just smashing the stick once in the desired direction does this. It was especially useful when avoiding a certain enemy that came running at you with spinning blades.

Aiming your weapon is handled with the touch screen and stylus, meaning that you're effectively playing this like you would any first-person shooter on the DS. The difference is that it doesn't affect the viewpoint that much, as you are merely sliding and placing the aiming reticule where you want to shoot, as opposed to being attached to your viewpoint like you would in an FPS. 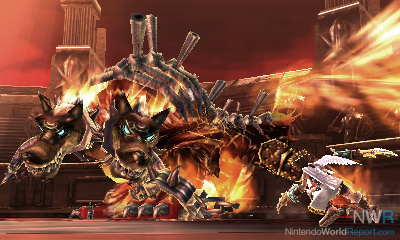 When you reach the very edge of the touch screen, you begin to move your view to the left or right, but this only happens very slowly. However, according to the instructions, a quick slide to the right or left would change your view quicker and let you shoot enemies to the side of you. The problem was that I just couldn't get this to work effectively for me. I even got flashbacks of playing Red Steel, where I was trying to turn to kill people just out of my eye line, but by the time the super-slow camera had done so, the enemy had moved or shot me 30 times. Maybe I was doing it wrong, or maybe I just need more time with it to be able to get this to work every time. I realise this is a hard thing to get right, as this isn't an FPS or a rail shooter, but a third-person action game somewhere in between.

Despite having these control issues, I got through the hard stage and onto the boss, who I almost killed before my time was up. After that, I got a score for that stage, which makes me hope for online leaderboards in the final version. Apparently the stages shown at the show are time-limited condensed versions of actual stages from the game, as it looks like the time you took will also play a factor in your high scores. 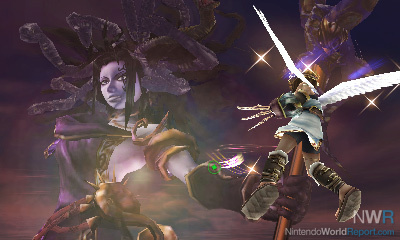 Visually, I think it looks great. Pit looks just as good as he does in Smash Bros Brawl, maybe even better in 3D. The environments were detailed, if a little uninteresting, as were the enemies. I did wonder why the other character models looked so basic compared to Pit. I hope it's a technical limitation and not a design choice.

The music was outstanding; anyone who watched the E3 trailer will have an idea about how good it sounds. The only downside is that Palutena is giving you constant hints about what to do next, what the enemies are, what the rail that you're grinding on is called (grind rail), etc. It started to get a bit irritating by the end of the demo. I certainly hope they choose a good voice actress for the English release!

Overall, I’m looking forward to playing the final build, as any game that combines Smash Bros. and Star Fox gets a look in my book. I just hope that Sakurai can pull it off successfully.

I did wonder why the other character models looked so basic compared to Pit. I hope it's a technical limitation and not a design choice.

Shouldn't that be the other way around? I hope that games get better looking than what you found to be dull, and if it's a technical limitation, then that doesn't leave much room for improvement going forward.

It's a launch game, it's probably not even close to the peak performance of the system.

It's not a launch game, at least in Japan (and we don't know launch games in other regions yet).

Sounds like this game has the same issue as the platforming areas in Super Smash Bros. Brawl: high-quality models for the main characters, bland everything else.  Not surprising, coming from Project Sora.

Pretty much par for the course for a launch game though...uneven graphics quality, and some control annoyances.  Reminds me of the early days of the DS.

Some direct capture footage of this demo was uploaded just now on another website. There definitely appeared to be an emphasis on using the 3D effect to anticipate and dodge all the projectiles flying directly at the screen towards Pit. Did you get a sense of that during your session, JC? If they could utilise the graphical enhancements of the system in a gameplay sense, I'll be all over this game.

I did wonder why the other character models looked so basic compared to Pit. I hope it's a technical limitation and not a design choice.

Shouldn't that be the other way around? I hope that games get better looking than what you found to be dull, and if it's a technical limitation, then that doesn't leave much room for improvement going forward.

No, I meant it that way. If it's a technical limitation, fair enough, there's nothing they can do but have lower polygon and simply designed enemies for the 3D effect. If Sakurai on the other-hand could have made them better but thought that these designs were good enough, that would be bad...

Some direct capture footage of this demo was uploaded just now on another website. There definitely appeared to be an emphasis on using the 3D effect to anticipate and dodge all the projectiles flying directly at the screen towards Pit. Did you get a sense of that during your session, JC? If they could utilise the graphical enhancements of the system in a gameplay sense, I'll be all over this game.

I'm not sure if the 3D let you anticipate projectiles better, but it definitely added to the effect.
There were some cool bits of flying through tunnels that really felt awesome in 3D.


If I could add something else that I liked about this preview, (just came to me, brain delay from playing/watching about 30 games in a day) the dynamic camera of the flying sections was a nice touch.
You may have seen this in action in the trailer where Pit is avoiding lasers and seemingly flying towards the screen then outwards again, this is actually playable and not a cutscene.
Skilful dodging was required to avoid those pesky lasers as it was the last section before the boss.

Dude... it sounds like a FPS (First Person Starfox)

Awesome impressions! So excited for the flying portions! Here is a video of the Kid Icarus presentation.

It's important to note that this game is listed as a Summer release which means it won't be out until July at the earliest.  So the game still has an extra 7 months worth of development left, which is probably why the enemy's graphics aren't as detailed as Pits at the moment since the game still has a ways to go before it's finished.

Nintendo games are well known for having the final versions graphics improved over demo's that came out only a few months before release.  This is nothing new and I image the same will happen for Kid Icarus.

I love how Pit's mannerisms have carried over from smash bros. So excited for this! I hope it does well enough to warrant a sequel on the wii 2. 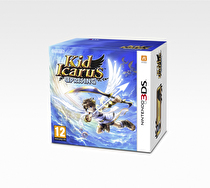