While the playable demo lacked cats, the 3D effects were great.

Nintendogs + Cats was on display at Nintendo's 3DS area and it looked awesome in 3D. Sadly, there were no cats in the demo, only three types of dogs: Labrador, Beagle, and Corky.

The top screen featured your adorable puppy friend, rendered in 3D. The depth that you can see with the 3D effect is stunning, as you can pet the dog in and interact with it. It's cute and adorable.

In the demo, you could also use different toys, such as a tennis ball, boomerang, and Frisbee. Throw them and your dog will go running into the background, once again showing off the 3D effects.

That was about it for the demo, though. It was quite limited, but definitely a cool update to the Nintendogs series. We'll see what's in stores for cats later. 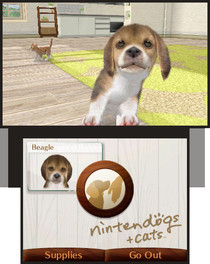 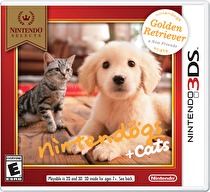