The next installment of Golden Sun matches up to the previous versions.

The Golden Sun demo on the show floor had two sections, each taking around five minutes to complete. The first was Adventure Mode, showcasing the puzzles encountered in the world as you go through each part of the map. The character could be controlled with either the control pad and buttons, or stylus and on-screen icons to select powers. The puzzles combine obstacles that need to be tackled to get through to the next part of the level with rescues of small creatures (Djinn). 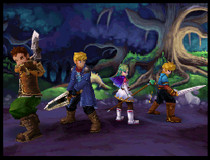 The first puzzle was simple and requires setting fire to a sign in order to light a fuse that lowers the drawbridge. The Fireball power can be selected using the R button or by tapping with the stylus, and the direction is controllable. Next was a series of logs and a statue that needed to be moved. The Move power is used to move the statue from a distance, with a limited radius where it is effective. With a combination of moving statues and setting signs on fire, you reach the end of the level.

After completion of this level, the demo shows a small area of a dungeon where there are sections that require moving statues to create paths to reach the end.

The other mode displayed was Battle Mode, showing three battles against several monsters from the game. The format and powers are similar to those from the earlier Golden Sun games. Attacking is turn-based. Attacks, charged attacks that use up PP, or Djinn, the small creatures, are selected for each of the characters before each side launches attacks in turn. The first battle is against smaller enemies and the final battle a larger boss.

The award for winning the battles is a village area of the game where you can walk through and talk to characters. The demo concludes with this area.

The graphical style was quite detailed and matched the game style well. 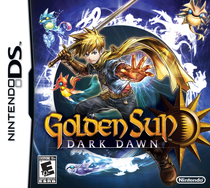