After finally getting a confirmed American release, Bowser's Inside Story is playable on the E3 2009 show floor.

As opposed to Zach's lengthy demo, I played a short demo of Mario & Luigi: Bowser's Inside Story. In the demo, Bowser was roaming around and saw some guy who was across a broken bridge on an island. Using a rope, he tried to reign in the island. However, Bowser is weak. That's where Mario and Luigi come in.

Mario and Luigi are inside of Bowser and now they have got to figure out how to make him stronger. The two heroes roam through Bowser's insides and fight enemies using the Mario and Luigi series' standard interactive RPG gameplay. It was nothing groundbreaking; both characters jumped and used their hammer.

As I got to the end of the short demo, I participated in a scene where I had to quickly reflect electrical shocks with Mario and Luigi's hammers and hit them into Bowser's arm muscles. Eventually, Bowser gained enough strength to pull the rope and move the separated island closer. Then, the demo ended.

I liked what I saw despite its brevity, and I can't wait to play this game when it hits stores this fall. 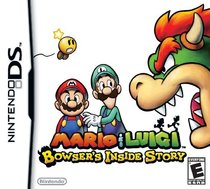