Connecting Through Cross-Play: How Online Multiplayer Has Kept Us Together

With friends and family gaming on different platforms, a handful of titles make it easier to stay connected.

Amid special battles in the never-ending console wars, a number of titles look past participating in the pursuit of platform dominance through cross-play. Cross-play or cross-platform multiplayer allows players on one console, like Switch, to join up for online gaming sessions with their friends, family, or just other random players. With Sony being more resistant to the concept and Nintendo's console being less powerful than the PlayStations and Xboxes, it's all the more gratifying to see game makers strive for a connected community that can play on their platform of choice. Certainly, a larger, unified player base helps push sales and ensure that online matches are always available, but there's no denying that the removal of barriers to online co-op and competitive play is, at its core, a positive change. Take a journey with a few of the NWR staff as we share our memories and experiences with a handful of cross-play enabled Nintendo Switch titles

Neal - The magic of crossplay has helped me out a lot, most recently in Sea of Thieves, which I used as a way to connect with friends and honestly society during the early days of the COVID-19 pandemic in 2020. Sure, that game’s not on Switch (yet?), but it’s a great example of how crossplay can be a good way to keep in touch with friends regardless of console ownership. More personally, though, Fortnite was a salve for me when I dealt with my first son’s birth. He was born early and spent three weeks in the NICU. My memories of that period are largely dark. I worked my day job during most of it, working through my lunch so I could get to the hospital as quickly as possible. When there, I’d spend time with my son, give my wife a break from being with him in the hospital constantly, and then as the night wound down, went home to do it all over again. This was around when Fortnite launched on Switch and I would go home, a relative hot mess of emotions and stress, not able to go to sleep. So I hopped on Fortnite with the fellas and tried to survive while shooting the breeze. I have barely played Fortnite outside of that three-week window, but I look fondly on my time with the game then because it sincerely helped me stay a little sane during an immensely anxious time. That involved playing Fortnite with Switch owners, PC owners, Xbox owners, and beyond. I even played with my niece as she was like a wizard playing it successfully on a phone.

Jordan - When I reconnected with some high school chums after a chance meeting at a mutual friend’s wedding, Fortnite ended up becoming the primary way we kept in touch. While reminiscing about people we used to know and events long past, on PC, Xbox, and Switch, each of us would link up without much trouble at all and within minutes be dropping down from on high, ready to get our battle royale on. Fortnite’s colorful and cartoonish aesthetic, combined with its fairly basic third-person shooter gameplay, make it an excellent candidate for a low-stress hangout session. The three of us don’t play as often as we did a couple years ago, but Fortnite is always part of the rotation when we do find an hour or two to shoot the breeze, and as many of our 97 opponents as we can! 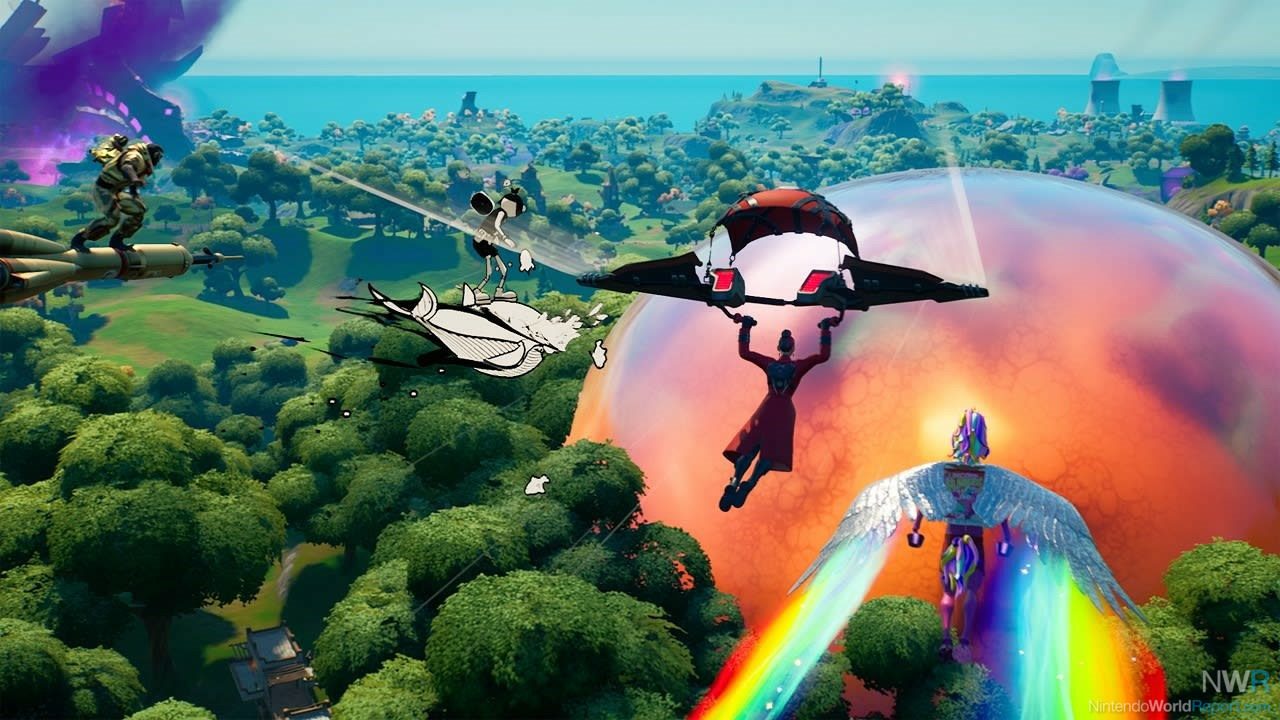 Jordan - When it launched in February of 2019, turn-based strategy game Wargroove had crossplay with Xbox, PC, and Switch. It would later add PS4 to that list, opening up even more multiplayer possibilities. After reviewing the game and coming away very impressed, I was shouting from the rooftops to different friend groups that they should pick up Wargroove so we could play together. I reminded a few pals in particular of our past experiences linking up GBAs to battle it out in Advance Wars, one of the obvious inspirations for

While a handful of my Switch-owning friends did pick up Wargroove, there was one person in particular, playing on a laptop, whom I ended up having a month-long series of matches with. Because he and his partner were expecting their first child, we hadn't gotten together in person in a couple months. Through Wargroove and Discord, we were able to stay in communication; I was able to pass along some of the specific experiences I went through as an expectant father, and he could pick my brain about the myriad questions that come up as you await the birth of your child.

Wargroove's slower pace makes it a wonderful example of a shared activity that offers fulfilling strategy gameplay while also offering ample opportunities for discussion during each person's turn. My friend and I ended up playing over a dozen matches, and as much fun as we had with the game itself, it was how Wargroove helped us stay connected ahead of the arrival of my friend's firstborn that really resonated with the both of us. 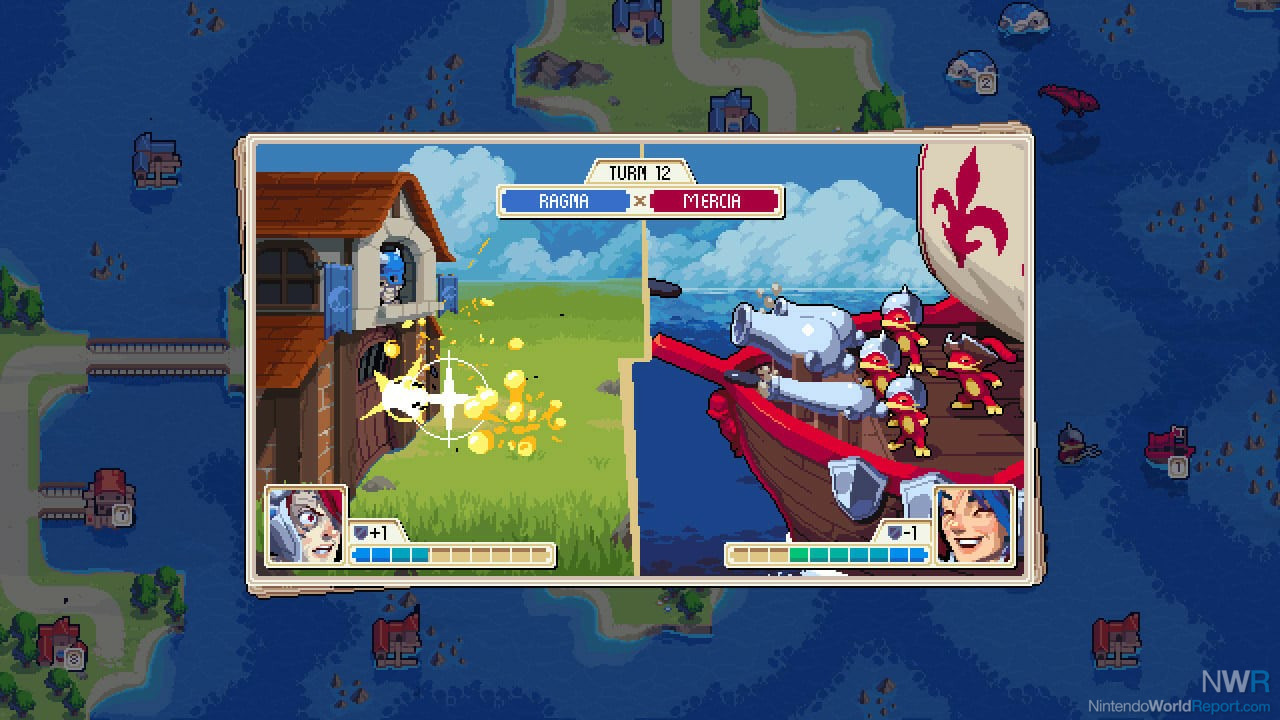 Joshua - Online crossplay is a great thing for games, but it’s always had one oft-mentioned drawback: when an older or weaker console is playing with stronger or more open opens. Even the new generation of consoles faces this issue when playing with PC players. A lot has been written about Call of Duty Warzone cheaters this year. Switch online crossplay is in a rougher situation since every console is much stronger than the endearing portable hybrid. Online crossplay with the Switch version of Apex Legends is unplayable due to the other console's higher resolutions, wider field of view, and higher frame rates, for instance.

None of that really applies to Knockout City, however. The game is designed not to require fine movement since there really isn't any aiming; targeting opponents is a lock-on system. The lock-on system removes the need for auto-aim scripts. The arenas are small enough that the Switch shows the exact same information as the other consoles. The entire arena is readable even at a distance. Velan Studios included a 60 frames-per-second mode, so gameplay speed is less of a factor for Switch players. It's hard to imagine an online crossplay game more fair than Knockout City, and I’ve continued to pour hours into it since reviewing the game around launch. 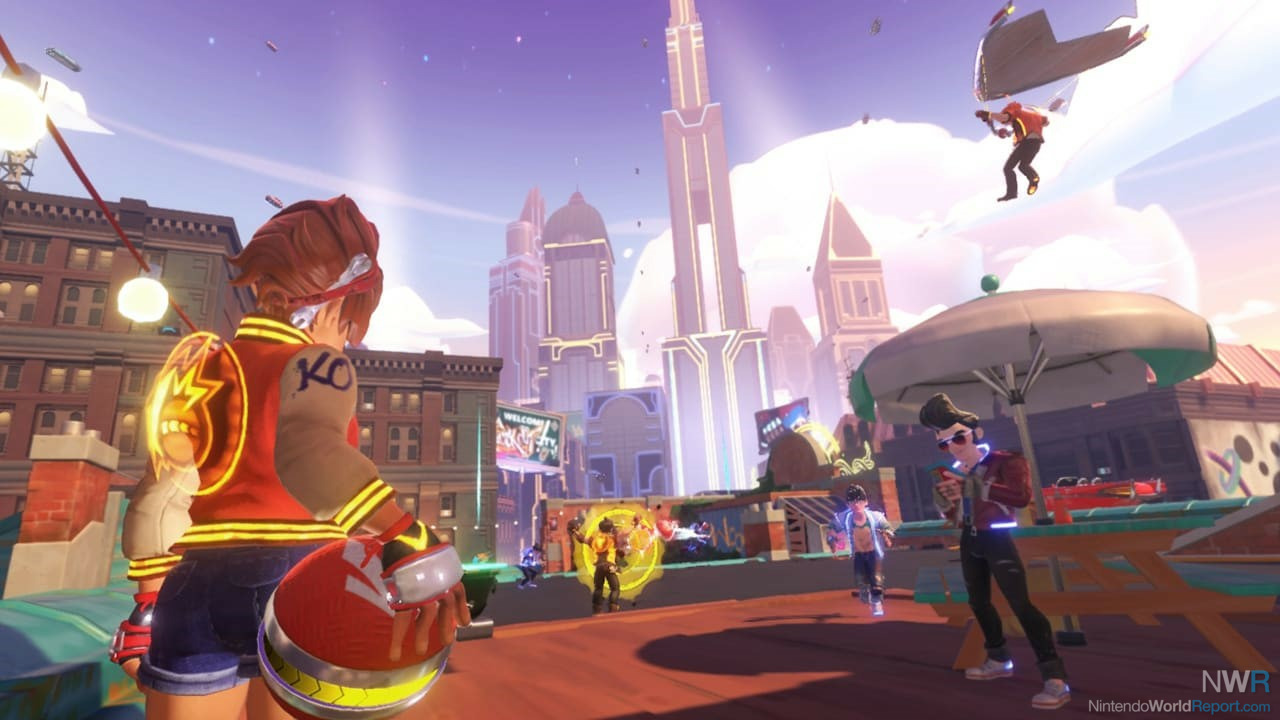 Power Rangers: Battle for the Grid

Matt- If you ask me, every game should have cross-play. Every single one. Because we’ve already seen how easy it is to do. We got the very first hint of this back when Fortnite did it by accident. You may not have heard about this since it was only two weeks before Fortnite: Battle Royale came into the world and the game became...well, Fortnite. For a brief and shining moment in September of 2017, players on Xbox One and PlayStation 4 were able to play together for the very first time, which Epic later clarified was a “configuration error.” It was that easy.

Okay, it’s not that easy. Developers obviously need to ensure that different consoles all have completely identical features and gameplay, which is easy enough for big studios and honestly pretty difficult for indie studios. Nevertheless, many games have gone to great lengths to connect players across different platforms, with an unexpected champion being Power Rangers: Battle for the Grid. I didn’t expect one of the best online experiences I’ve ever had in gaming to come from a clearly low-budget licensed fighting game, but Battle for the Grid not only stands out among fighting games for its use of the coveted rollback netcode, it also has full cross-play across five platforms (Switch, PS4, Xbox One, PC, and Stadia). 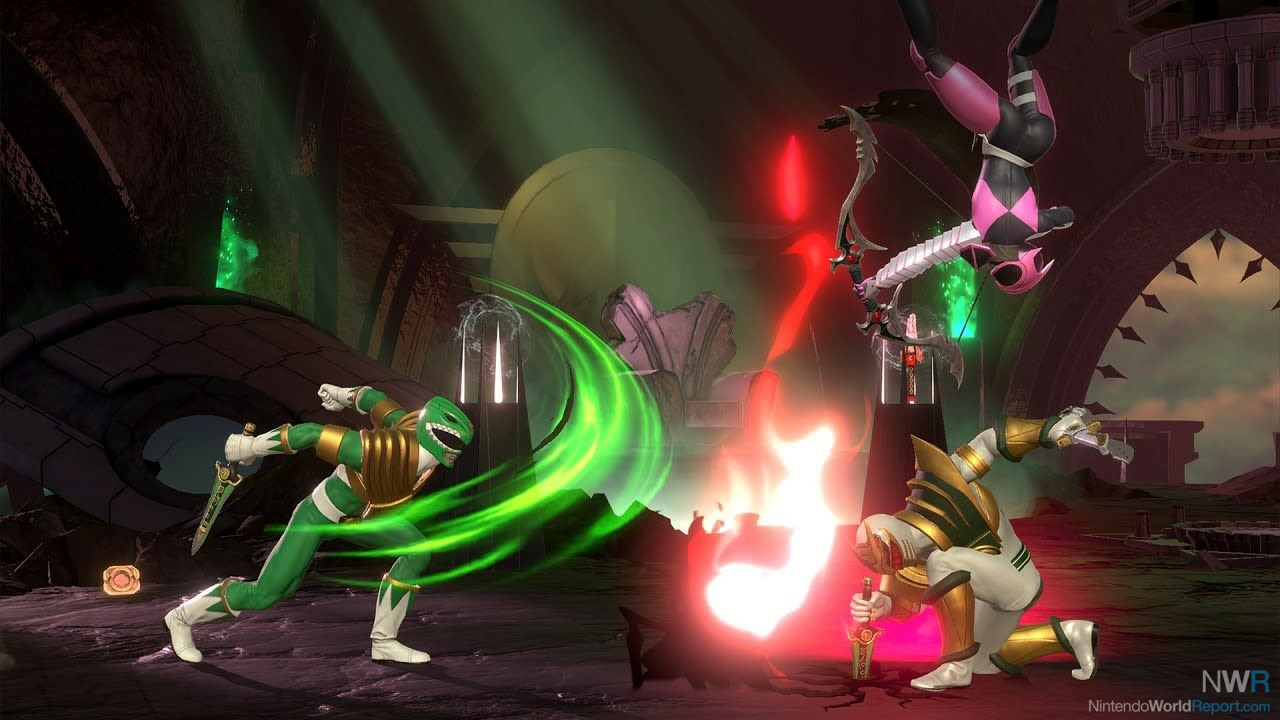 The Future of Cross-Play

Matt - Ever since Power Rangers proved that anyone could do it, my most consistent experience with cross-play is the trouble caused whenever a game I play doesn’t have it. My friends and I are all big fans of the indie roguelike Risk of Rain 2, and most of us play together pretty often on PC. The odd one out is one friend who doesn’t have a gaming PC, so he’s stuck playing alone on PS4. I actually ended up double dipping and buying the game on PS4 to play with him, but it’s not like this is an option for all of us; more of us have gaming PCs than PlayStations.

This is something I’ve been worried about with the looming specter of Nickelodeon All-Star Brawl. All of my friends are huge Smash Bros. fans and are really excited about this, but we’re not sure what we’re going to do about it given it doesn’t appear to have cross-play. The developers haven’t commented on cross-play specifically, but they have confirmed that while rollback netcode will be supported on all platforms, the Switch version will only be able to implement rollback in 1v1 matches, which seems to imply that cross-play is impossible. For this very reason the Switch release is unappealing because it has the potential to be an inferior version, but where else would we get it? 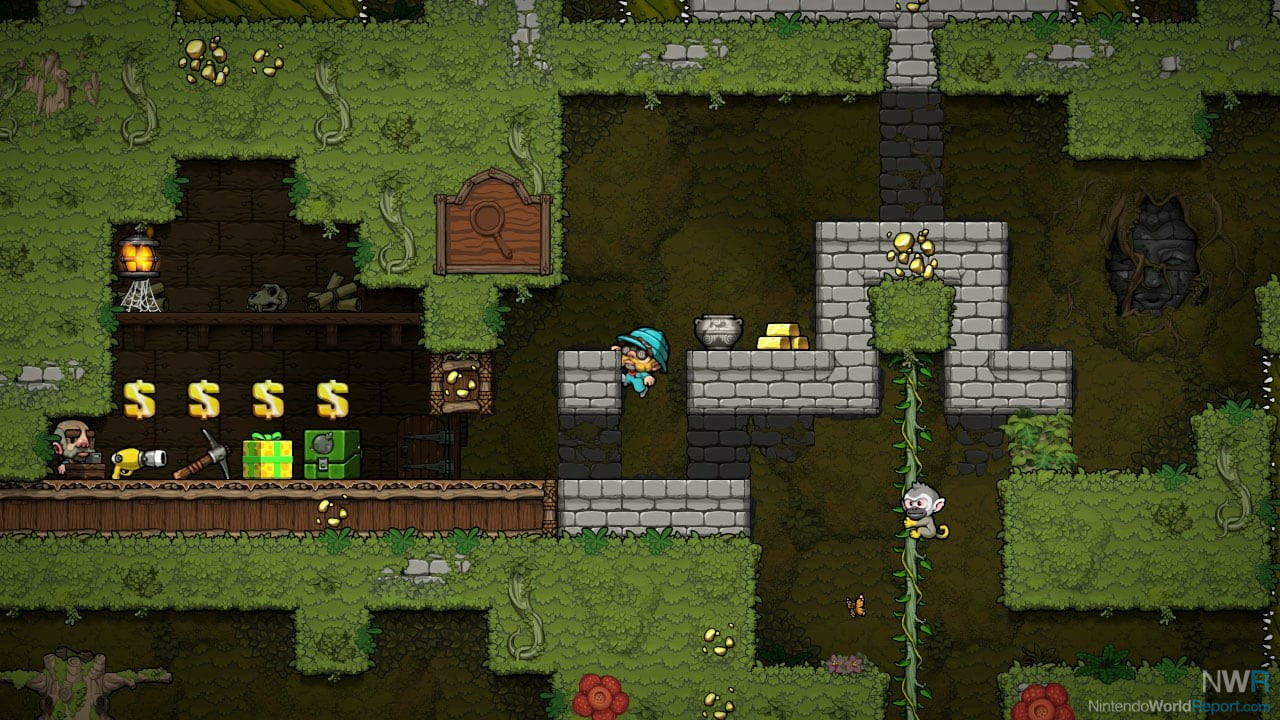 Thankfully there are always new strides being made with cross-play. Another of my favorite multiplayer games, Spelunky 2, is very close to adding the feature. It’s so close that they just patched in an icon in multiplayer lobbies to indicate which platform someone is playing on. By the time you’re reading this it may already be available, and then for at least that game I’ll never have to worry about who has what gaming systems again. Another game I love, Project Winter, received support for cross-play last year (and also just recently released on Switch!). I hope this is the sign of a growing trend and not just a flash in the pan, since a future with universal (or at least pretty common) cross-play would be a very bright future.