Impressions from the Ambition: A Minuet in Power Beta

And heads will roll

The French Revolution dating-sim, roguelike Ambition: A Minuet in Power was recently announced for a summer release on the Nintendo Switch. It is very uncommon for a video game to combine those genres, so imagining how Ambition will play isn’t an easy task. Fortunately, the team over at Joy Manufacturing Co. shared a playable beta with me.

The game begins with the player character, Yvette, journeying to Paris from her small hometown via carriage to meet her fiance at a bar. When she arrives there, her fiance is nowhere to be seen. This is where the game introduces its conversation mechanic. The player will pick between various patrons of the bar to ask if they’ve seen her fiance. There are only two chances to talk to people, so you’ll have to pick carefully who to interrogate as you won’t be able to talk to everyone. Based on the chosen responses each conversation has the chance to provide information or one of two resources: Peril and Credibility. The full scope of Peril and Credibility hasn’t been revealed, but information is more immediately useful. 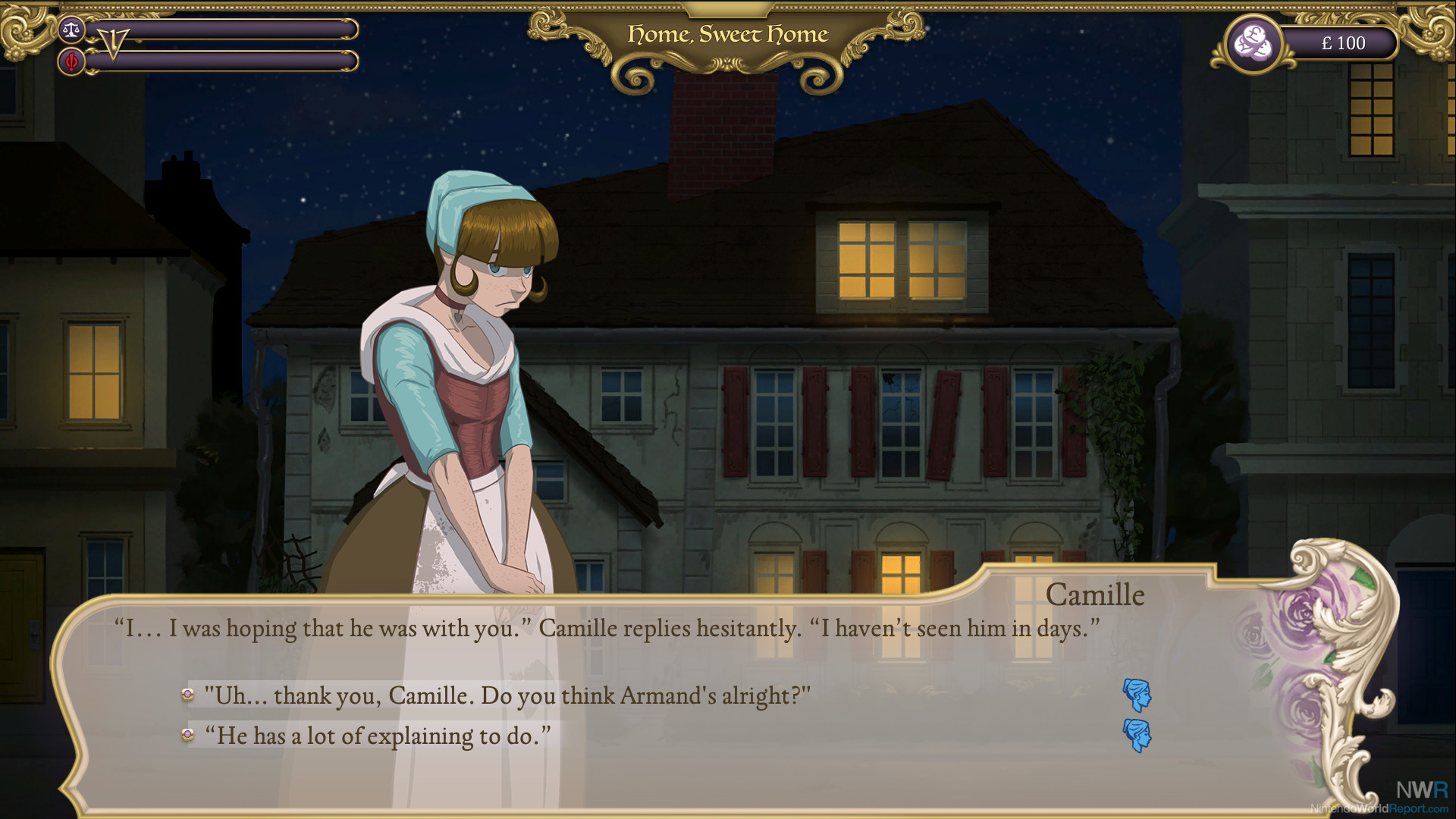 After exhausting all the conversation chances, Yvette heads to Armand’s house hoping that he’s home. Unfortunately, he isn’t there either. Who is home, however, is Camille, Armand’s housekeeper. Camille is delightful. In a colorful cast of characters, she’s quickly become my favorite. She’s capable and knowledgeable but jovial and not-so-serious in a way that other characters haven’t been yet. She gives you the news day-to-day, advice on what to do as well as bringing you any party invitations that show up for Yvette. One of which has already arrived on her first day from a “Viscountess de Foix.”

Parties are a big deal in Ambition: A Minuet in Power. This is where most of the connections will be forged and the lion’s share of useful information will be found. Preparing for a party is just as important. The nobility of Paris are apparently very particular on the types of outfits a person wears. Each ensemble will have different attributes valued by different Parisian factions as well as a depleting resource called Novelty. When the player wears an outfit too much it will become detrimental to their attempts at warming up to the movers and shakers of the world. 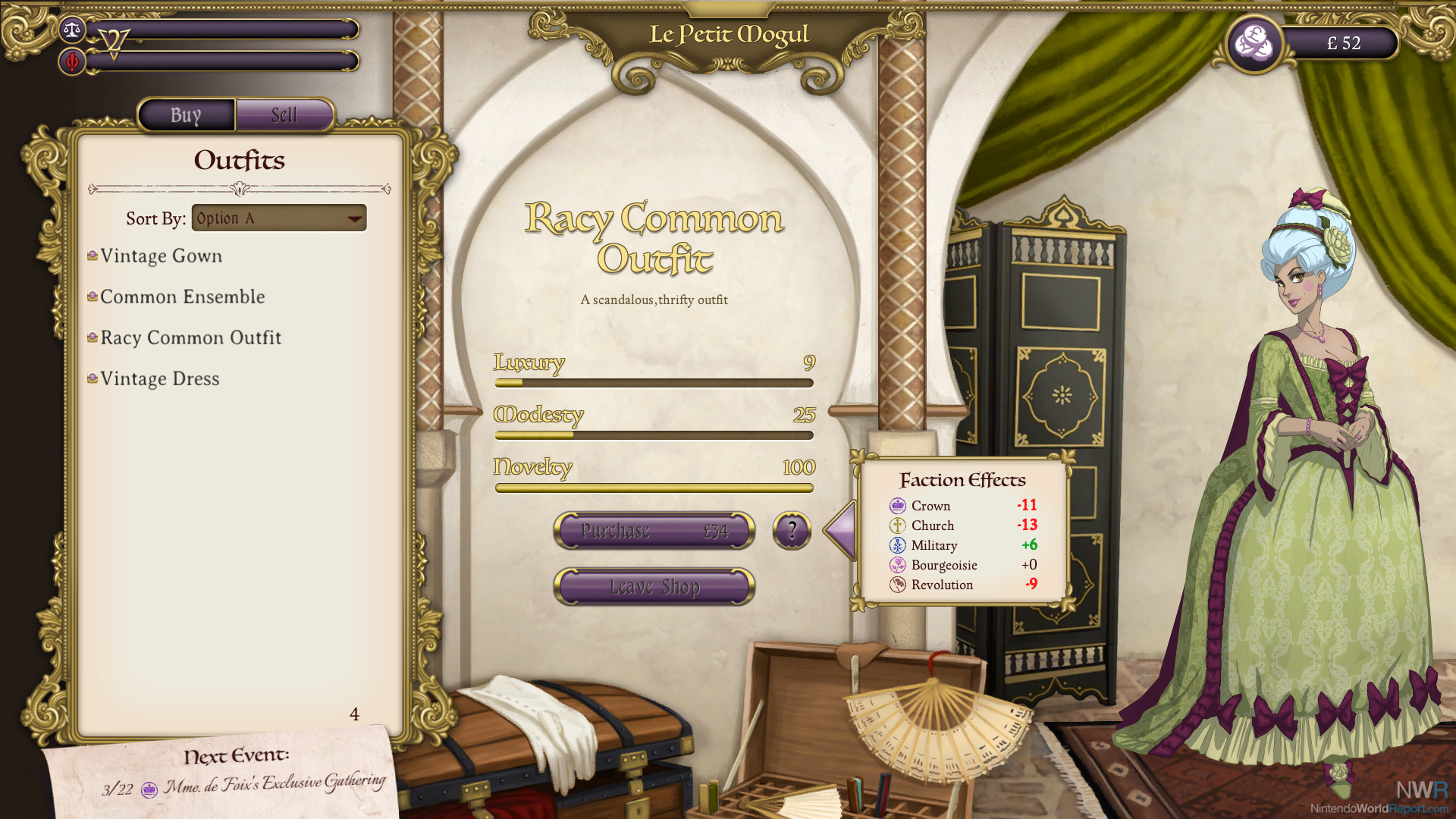 When she finally attends the party, Yvettte meets Viscountess de Foix who is an early game antagonist. She only invited Armand and Yvette to embarrass them in front of other Parisian elites. Since Armand is still missing she settles on embarrassing only Yvette. This is the player’s first chance to gain and lose favor with the main factions of Ambition, The Crown and The Revolution. Naturally for a game taking place in the French Revolution, you will be able to sway the winds of change toward the elites or the proletariat. Choosing to curse your host’s rudeness will gain Yvette favor with The Revolution. There are also three minor factions that can be manipulated: The Church, The Bourgeoisie, and The Military. Their effect on Yvette’s fate hasn’t been revealed yet.

Before being thrown out of the Viscountess’ party, Yvette will learn a small bit of gossip about The Crown. Waking up the next day Camille will mention that Yvette could sell that piece of gossip to a local paper since she needs money to earn her way in Paris and pay the house’s mortgage along with Camille’s wages. Selling gossip will be primarily used to earn money, but can also be used to sway public favor toward or away from a faction. 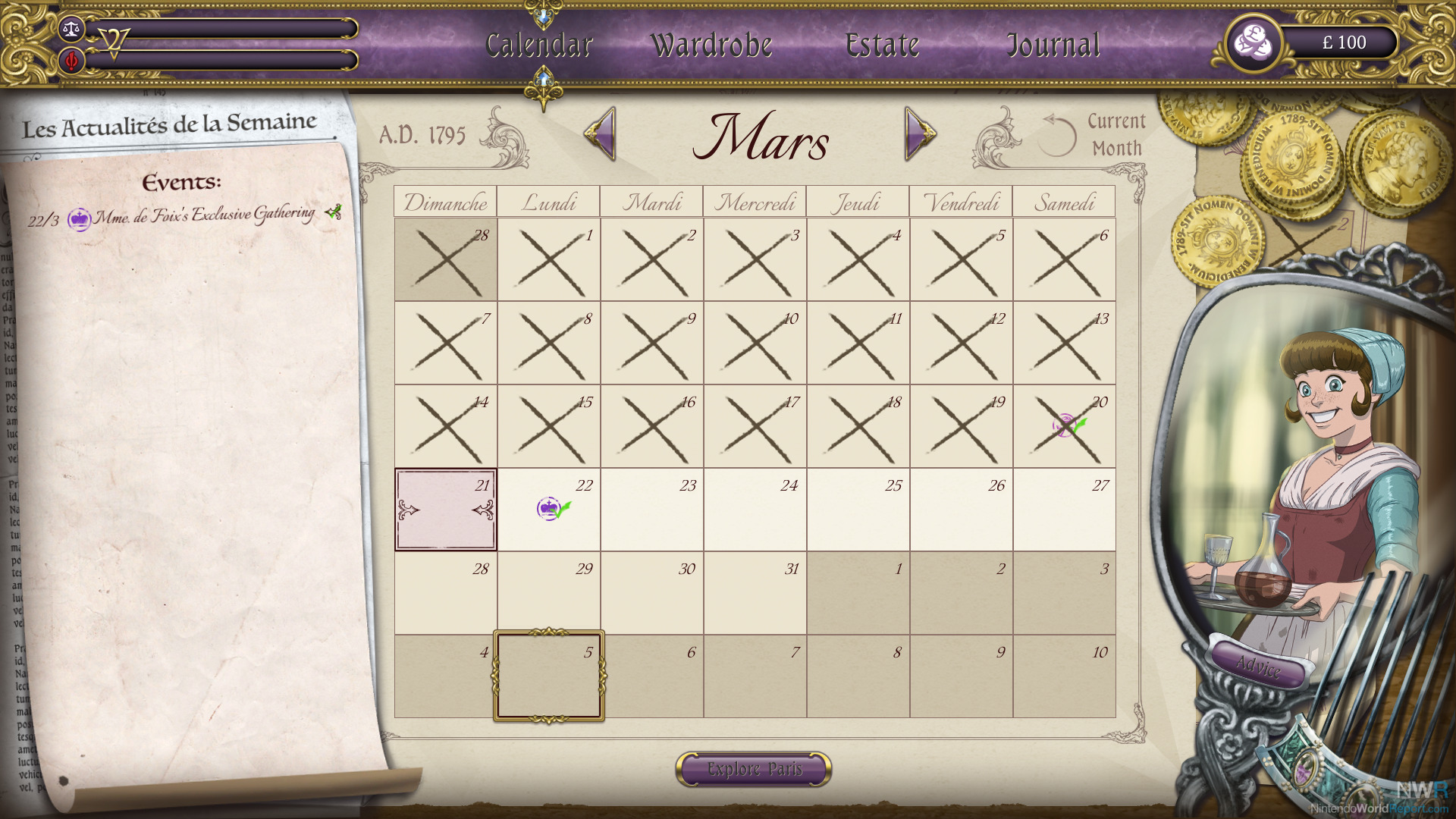 With that, the game opens up. Random events and places of interest will be available to visit. Randomized parties can be attended. The player can continue the search for their missing fiance or team up with other nobles to get revenge on Viscountess de Foix. My forays into what happens after this has been a little slow due to the beta having a penchant to crash before I can save my gained progress. This is a non-public beta, so I’m not terribly concerned about technical hic-cups like these. There should be time to iron anything out before the game’s official launch. This did give me a chance to see how quickly it would be to start over if anyone wanted to replay the game. All the tutorials are skippable and the required story scenes are fairly fast to click through if you aren’t reading. 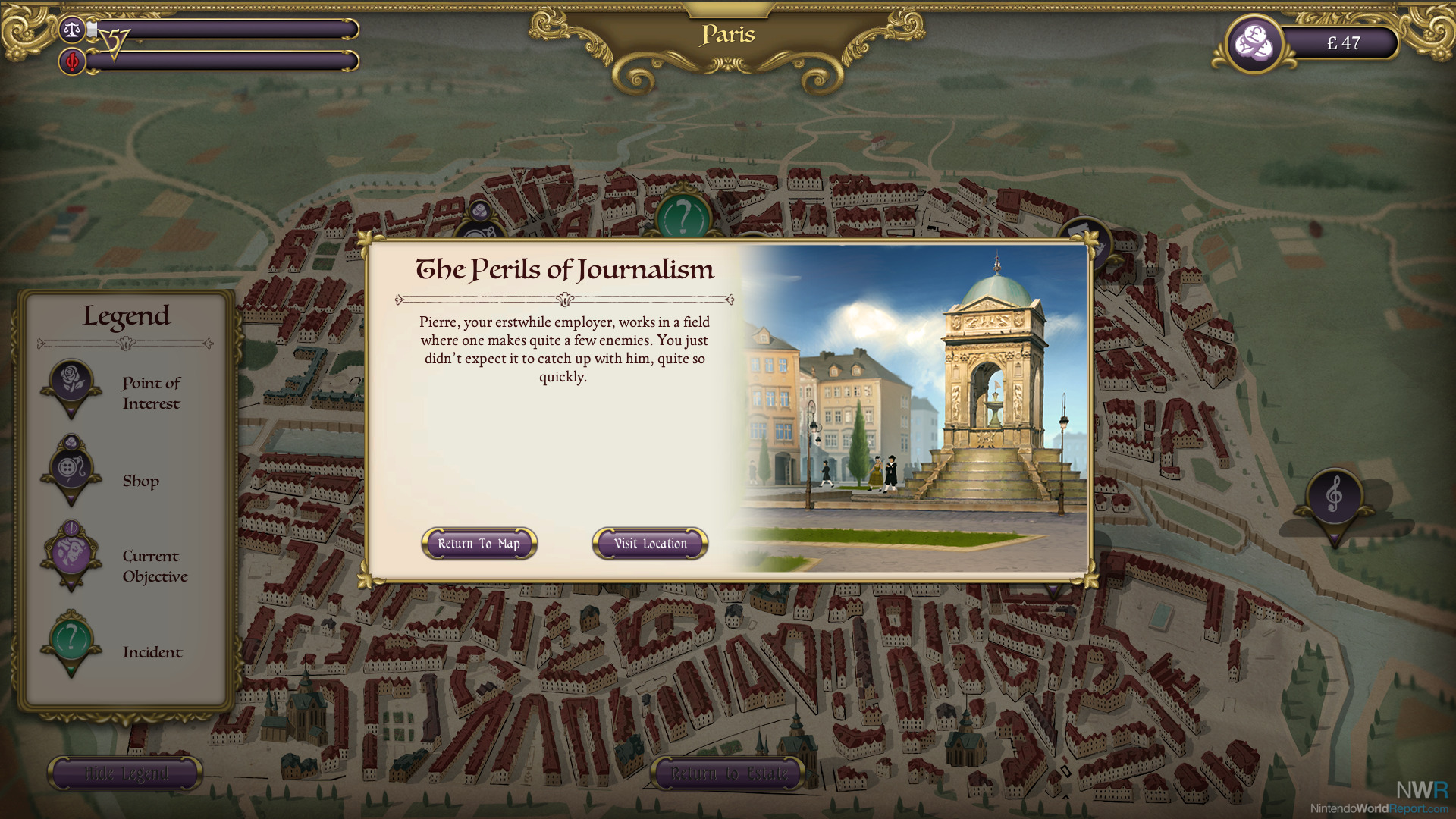 So far, I’m excited for what Ambition: A Minuet in Power is shaping up to be. The gameplay feels like a grander version of the system the Reigns series uses. Balancing how much important groups like or detest you, but with an actual end goal and characters. You should also know that aesthetically Ambition is truly great. The soundtrack is dynamic and catchy. The context of scenes will take dramatic turns quickly and the music will follow along with it. Every one of those scenes are beautifully drawn from the detailed backgrounds to the actual characters. It really is a stunning game to look at.

The PC release in spring is coming up quickly. PC players seemingly have a treat on their hands. Fortunately, Switch players won’t have long to wait when Ambition: A Minuet in Power is ported over in the summer.