Audio enhancement for those on the go. 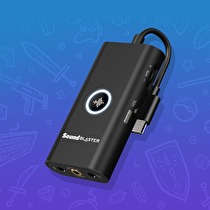 As we get further into the lifecycle of the Switch, developers are discovering new ways to push the graphical limits of the portable device. The porting of titles once thought impossible to get onto Nintendo latest platform such as The Witcher 3 and Overwatch illustrates how much more the Switch is capable of. While the graphics continue to improve, audio quality seems to have fallen down the priority list. Very few Switch games even go as far as providing Dolby Surround support, leaving the only option for auditory improvements to be an external amplifier.

I’ve covered a few different gaming Digital to Analog Convertor (DAC) amplifiers, and so far none have come even close to the audio quality of the Sound Blaster X3 and its Super X-Fi software. But the Sound Blaster X3 is both a significant investment, and a non-portable option for a device on the go. To address this gap in the marketplace, Creative has a new product called the Sound Blaster G3, a small, less expensive option that’s also portable. It may not have the same mind-bending audio improvements featured in the X3, but the practicality of the G3 makes it an option worth considering.

The core feature of any gaming DAC is the improvement of audio quality. If you’d like detailed information on how these amplifiers accomplish this, a very thorough explanation is available here. At the end of the day, the only person that can determine the extent of that improvement is the person listening to it. Audiophiles will swear by the improvements made by a DAC, while a casual listener may find the upgrade much less perceptible. As someone who falls somewhere in-between, I can say that the difference is noticeable, and I certainly prefer the sound quality of a DAC to not using one at all. In the case of the G3, sounds are perceived as more clear and separate from each other. The sound effects of such things like footsteps, character voices and background music feel more distinct when using the G3.

The feature that will be of most interest to Switch owners is that the G3 is portable and can be used on the go. The device is small enough to fit in your palm and connects to the Switch via the USB-C connection. Connecting your headphones via standard 3.5mm jack happens underneath the Switch as the G3 dangles from underneath. Not that it would sell me either way, but I actually prefer having the headphone cord underneath the Switch as it less likely to get in my way during play sessions.

Power consumption is minimal but noticeable; in my own testing, the Switch appeared to lose battery power between 10% and 15% quicker. When at home, an included USB-C to A converter allows for the connection to the Switch dock so that audio improvement is not restricted to handheld mode. The G3 does have bluetooth, but this is limited to a connection with your smartphone in order to control the EQ settings. Bluetooth headphones cannot connect to the G3 so you’ll need to have a wired connection. The G3 also has a feature that you can independently control the mic and chat audio from the in-game audio, but unfortunately this is only available on other platforms and is not supported on Switch.

At the end of the day, it would still be nice if developers would put more focus on audio fidelity, but until that time at least audiophiles still have products like the G3. The compact form is perfect to just throw into your pocket when you're leaving the house, and the relatively low power consumption won’t drastically alter your playtime. It’s unfortunate the trade off for portability is a lack of Super X-Fi, but even without the high end audio improvement, portable Switch players with high auditory expectations will appreciate the option presented.