This time on Review Revisit, we're taking a look at the 2011 3DS title Super Mario 3D Land. Though the system was carrying troubling sales numbers throughout 2011, EAD Tokyo's smash hit helped propel the system's audience to new heights. Our original reviewer, Neal Ronaghan, said the following in his original review, awarding the game a 9.5 out of 10:

"EAD Tokyo’s 3DS debut is marvelous, and filled with almost endless creativity. The control and graphical quirks are a little off-putting, but more because we’re so accustomed to 3D and side-scrolling Mario being separate things. Super Mario 3D Land combines the two, and it works well. If you own a 3DS, you should likely get this game. It’ll last you a long time, and it’s a great new Mario game."

Three years later, Neal looked back on the game and said the following:

"I think I actually like Super Mario 3D Land now more than I did when I reviewed it in 2011. At the time, I really adored the smart portable design and excellent use of 3D. Now, looking back and comparing it where the Mario series went after 3D Land in New Super Mario Bros. 2/U and 3D World, I like 3D Land even more. It's my favorite Mario game since Galaxy and easily one of my favorite Mario games ever." 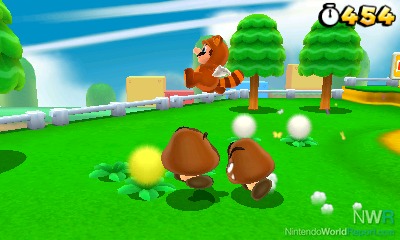 Alex Culafi, Associate Editor: Super Mario 3D Land is, hands down, my favorite game on 3DS. Combining tight 3D Mario gameplay with 2D Mario sensibilities is an excellent enough idea, but EAD Tokyo truly earns their grand slam with a plethora of content, a refreshingly brisk level structure, and new types of 3D-powered level design never before possible on any other system or Mario game. It's simple and pure in a way Nintendo games haven't been in a very long time, and as far as I'm concerned, it is one of Mario's finest outings.

J.P. Corbran, Community Manager: In my mind, 3D Land was the natural evolution of the trajectory EAD Tokyo was on with the Galaxy games. While it lacked the high presentation values of those titles, its level designs were as excellent as its predecessors, and its art style, while simple, was very evocative of the roots of the franchise. The only criticism I can see is that its successor, 3D World, was a more expansive and fleshed out version of the same formula. To this day, I'd call it the best game on the 3DS, and one of my favorites of all time.

John Rairdin, Associate Editor: I would never have imagined that a handheld Mario game could hold up to Galaxy, but they did it. The handheld environment was the perfect place for EAD Tokyo to try out their bold new vision of Mario. While 3D World was a great game, I'd still say that 3D Land is the best incarnation of this version of 3D Mario because its short play structure is perfectly suited to a handheld.

Curtis Bonds, Associate Editor: I wasn't sure what to expect out of Super Mario 3D Land when it was first coming out. I was excited to finally have a portable 3D Mario game that wasn't a remake, but at the same time, it looked like it didn't really have a central theme like Sunshine and Galaxy did. Thankfully, what I got was something I didn't know I wanted: a game that really puts your platforming skills to the test.

Having every world not have a specific theme/trope tied to it allowed each level to have its own unique twist and challenge. It gave me a feeling of not knowing what to expect next, and kept me on my toes. Couple that with the extra worlds and challenges that open up once you complete the game, and this is one of the best portable Mario games to date.

And lastly, Alex and J.P. got together and recorded a discussion of the game. Enjoy!

Phenomenal game! My favorite part was being able to switch between the two different types of 3D. I also have never beaten the final level. Dumb question, do you guys play through the whole game again when you do these review revisits?

Amazing game which I found gets better when replayed.  The smaller levels I find hold up better since the platforming is more compact when you're trying to speed run through them which is why I had more fun doing every level a second time as Luigi then I did as Mario.  In comparison to 3D World, which spread out a lot of it's content in the levels, resulting in them being more fun the first time through when exploring everything, but not holding up when you're just trying to speed through them as the other characters if you're going for 100% stamps like I was since you can just pass a lot of the content that way.

So yeah, 3D Land and 3D World are an interesting 2 sides of a coin to me.  3D World is the better first time experience, but 3D Land is a better replay experience.

Obligatory "this game is overrated and the weakest 3D Mario title" post.

Obligatory "this game is overrated and the weakest 3D Mario title" post.

Is it opposite day already?  ;)

3D Land is the game that got me to finally buy a 3DS 9 months after launch.  Once a Mario platformer hits a system any resistance I have instantly breaks down.  I thought this game was a practically perfect melding of the two strands of Mario platforming styles.


That said, I do prefer 3D World.  I think the level design is way more interesting and I vastly prefer the platforming physics of World.

I made the comparison in the podcast with Alex that 3D Land is the Super Mario 3 to 3D World's Super Mario World. They clearly share a lot of the same design mechanics, but 3D Land is tighter and more focused while 3D World expands upon it more, with bigger levels that have more going on in them.

This game really is crazy good.  It was just a joy to play the whole way through.

Huh, interesting. I think it's a good game, but nothing special. The levels never reach the creative heights of most other Mario games, the control is stiff and wonky, and the game is pretty short, with the lame idea of half the game being "remixes" of the other levels, most of which are barely any different. I can't really praise a game when only half of it is good.

So if you decide to do one of these for Mario Kart 7 then i'd love to give a few cents.

He's just mad because Super Mario World had guys throwing footballs and baseballs at you but no soccer balls.

3D Land and 3D World comparisons are like comparing Galaxy 1 or Galaxy 2, Bayonetta 1 and 2.

Second one polishes up on the first game and adds more levels.

3D World is probably a better game, but 3D Land is the originator and it probably left a bigger impression on me for it's sheer originality.

Have you written up something for the site about your feelings/explanation of this? I'm genuinely intrigued to know why you think that.


It's not often that someone is this wrong.  :cool;

Have you written up something for the site about your feelings/explanation of this? I'm genuinely intrigued to know why you think that.


It's not often that someone is this wrong.  :cool;

I did at one point, I think around the SNES anniversary stuff we did. It was about that and Link to the Past, which I also don't like.

EDIT: Here it is. http://www.nintendoworldreport.com/blog/27615/from-an-outsiders-perspective-the-snes

Haha, the commenters on that post kinda nailed it - you don't explain why you don't like them!


There are lots of games (most games!) where you wouldn't have to justify your feelings for, games where people can say "oh yeah i can see why some people wouldn't like it" but when it's LttP and SMW....it's very rare to find people on your side, so you really need to dig deep and explain yourself!


Take me for example, Megaman - meh.
Popular game, but I know I'd have some people on my side there.

With those games I doubt anyone would ever deem any reason I'd give for not liking them acceptable. It's a lost cause for me. With World I really think it is just an issue of playing a ton of Mario 3 for over a decade, then playing a game that's largely very similar but with some key differences in design that I like a lot worse. And with LTTP I'm realizing I just plain don't really like 2D Zelda.