Mariobilia: Treasure Worth a Warrior's Ransom

We take a closer look at the Hyrule Warriors Treasure Box edition. 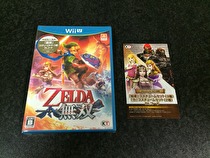 Last week Daan gave us an unboxing video showing the wondrous Treasure Box version of Zelda Musou, otherwise known as Hyrule Warriors outside of Japan. Now it's my turn to take a look at all the bonus goodies that come with the game. Let's open up this chest and see what treasure lies within! 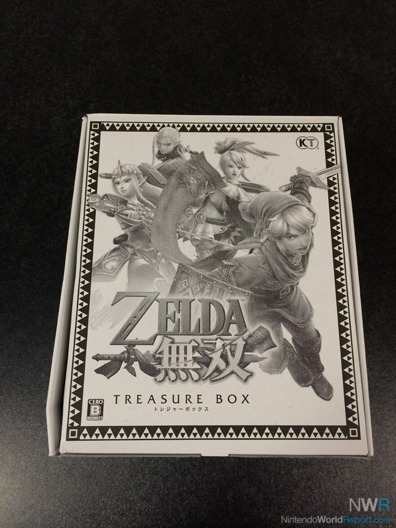 My copy of the set arrived a few days later than Daan's. After all, Australia is further away from Japan than Europe, and though intact, the box arrived slightly crushed from transit. Thanks, Australia Post! Fortunately nothing inside the box itself was damaged.

The outer packaging is somewhat plain, featuring only a black and white pictograph on the lid and no other discerning features. Perhaps the minimalistic approach is to offset the tidal wave of extravagance contained within?

For those curious about the exact contents of this set, here's a quick itemization.

I won't go into detail about the game itself or any of the costume packs here, other than to say it's nice this package contains all the currently-available DLC in one place. It would have been even nicer to see this option available to Western players too. It's interesting that in Western countries, the DLC costume packs are sorted into their respective game, whereas they're sorted by character in Japan. Let's just hope that all the packs are available for purchase on the eShop eventually. 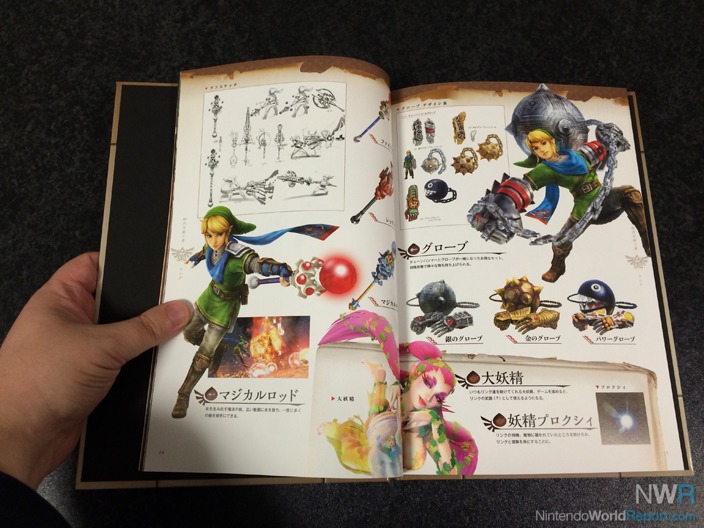 Why hasn't Mario earned an art book yet?

The art book is 80 pages long, hardcover bound, and it makes a lovely companion to Hyrule Historia and other recent Zelda publications. It contains notes from the designers, concept art, sketches, and final renders of each of the playable characters in the game, their items and weapons, enemies, bosses, and locations found in the game. There's even a lengthy prologue to the game, a character relationship hierarchy chart, and the obligatory interview with Aonuma. The Treasure Box version is worth it for this book alone. 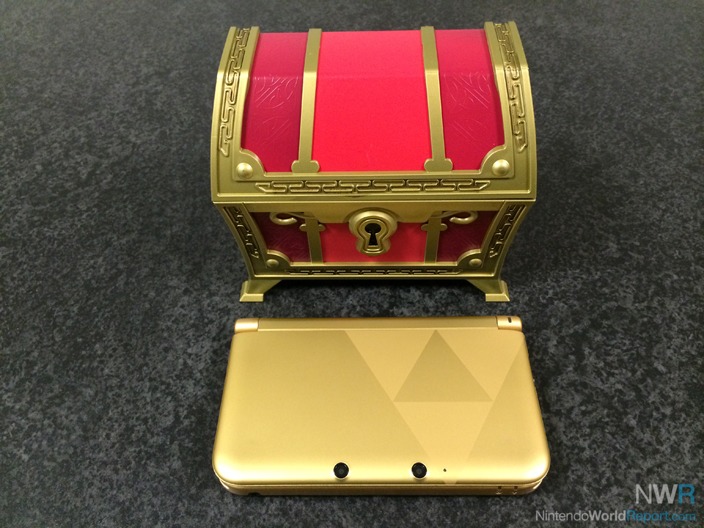 Size comparison to the 3DS XL.

The treasure chest is both bigger and smaller than I expected it to be. It's not big enough to house Wii U game cases or Nintendo handhelds in the current 3DS family. Short of coiling up your Nunchuk cable and putting that in the chest, it won't even hold a spare controller. However, the interior is lined with a padded velvety layer to protect whatever personal trinkets you'd want to put in there, and the overall design is great. It's made of plastic and the lock serves no practical purpose beyond the aesthetic value, but the chest still has some weight to it and feels solid. There's even a strap to prevent the lid from falling backwards when you open it the whole way, which is very considerate. 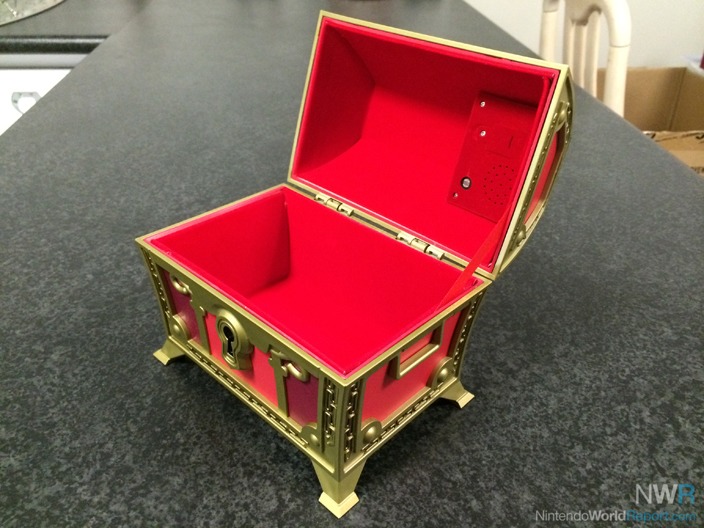 The speaker inside the lid is quite powerful and the music that plays when you open the chest is loud enough to turn the heads of any person within earshot. Without removing the battery cover there's no apparent way to actually stop the sound from playing either, but what true Zelda fan would want to?

The Triforce clock (oddly one item that actually will fit in the treasure chest) is very small and seems to be intended as an alarm clock for your bedroom or desk. The clock's digital screen appears in the space between the three triangles and has a fairly basic 24-hour time display. The time and alarm can be set on the back, with simple plus, minus, and “set” buttons. A fourth, “select” button serves to turn the alarm on and off and cycle through three Zelda-themed musical alarm tones. The tunes that play are versions from Hyrule Warriros, and are a choice of the Legend of Zelda main theme, the Hyrule Field music from Twilight Princess, and the Skyloft theme from Skyward Sword. Like the musical chest, each tune is played loud and clear and runs a sample of some ten seconds each before repeating until the alarm is turned off. There doesn't appear to be a way to set the alarm to play all three songs in succession, only a loop of the one song of your choice. 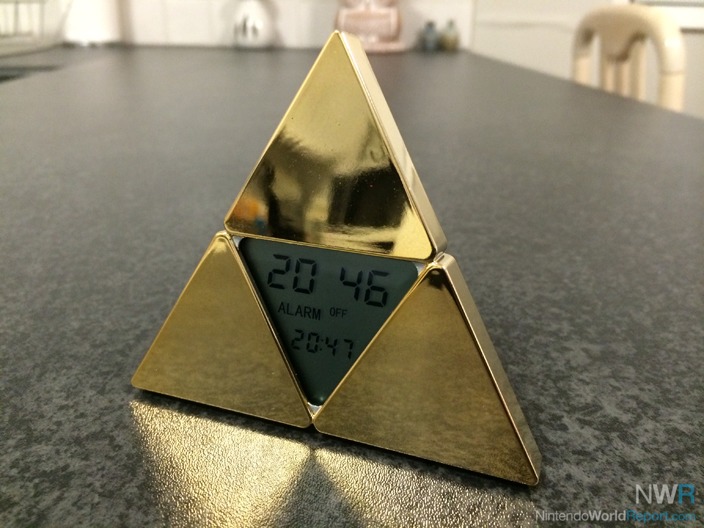 This Triforce doesn't grant wishes, it just tells you you're late for work.

It would have been even cooler if the screen was backlit in some way so you could see the time in the dark, and the tiny buttons on the back seem slightly impractical when you're blindly fumbling around to turn off the blaring music each morning. Still, it's a neat little item to have and I can think of far worse things to wake up to than awesome Zelda tunes. 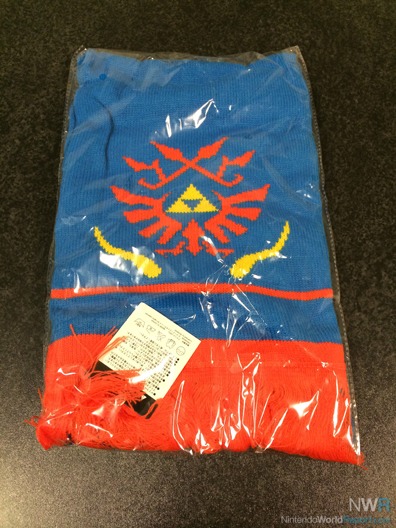 The postcard set is a neat bonus to discover considering it wasn't advertised as being included in the box. The set of five cards feature Link, Impa, Zelda, Lana, and Ganondorf on different-colored backdrops.

And finally, the one item that fans in Europe will receive with special orders of the game (sorry USA!), Link's scarf as seen worn by the hero in the game. The physical item is life-sized and comes with the pattern woven directly into the fabric. It looks to be of really nice design, but I'll admit I'm reluctant to take it out of its sealed bag at this stage for fear of getting it dusty.

There's no question that Japan got the ultimate version of Hyrule Warriors. It's still nice that the DLC and scarf will make it to other regions in one way or another, even without the art book and other goodies. You can check out a few more photos in the gallery below which show the postcard set and a closer look at the other items. As always, thanks for reading!

I prefer to buy games digitally, but if this comes to the USA in all in. I'd love to have that tri-force clock sit on my desk at work