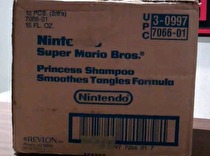 It's been a few months, but I'm back. There was no need to worry though, as I haven't stopped collecting Nintendo items. It's just sometimes good to take a step back from the videos to focus on other things.

With that said, there are plenty of goods to be seen in this week. The usual suspects are here including Pokémon merchandise, and a Zelda belt. The biggest surprise addition to the collection this week is an unopened 24 year old Princess Peach Toadstool shampoo bottle with its original box. Special thanks also goes out to Nick Oehlberg of StreetPass Princeton, NJ for hooking me up with The Legend of Zelda: A Link Between Worlds musical DS cart holding chest. Enjoy!