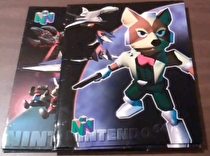 For those who don’t know, I’m a pretty big Nintendo Fanboy. I collect just about anything that says Nintendo on it including games, merchandise, memorabilia and more. Here I am again taking over the Mariobilia feature for Andrew.

This week's journal once again contains some random Pokémon merchandise. Seriously, it's so easy to find cheap Pokémon stuff, and there is a lot of it. Some of the coolest items shown in this week's video are Star Fox 64 folders which I obtained from a friend who had them in storage. The highlight this week is, without a doubt, the Pit and Dark Pit Figma figures which I imported from Japan. Enjoy!