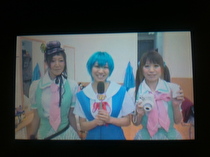 After a beefy pile of releases last week, things are a little more calmed down on the eShop in the Land of the Rising Sun this week. Shall we take a look?

Even the video content on the eShop is lacking this week. One compilation video, featuring three different 30-second commercials for Mario Tennis Open, was the only thing released this week. They are actually quite entertaining, as the two celebrities in the commercials really get into the game. You can check it out in the video below.

Some of you may recall Itsu no Ma ni Terebi, which is sometimes dubbed SpotPass TV. It’s a joint venture between two large television companies in Japan (Fuji TV and Nihon TV) that brings exclusive 3D video content to the Nintendo 3DS. It’s completely free and available for download from the eShop. Unfortunately, if you are outside Japan, you probably won’t be able to view any of it (unless you have some kind of virtual private network or something). After a long hiatus from the service, I once again booted up the application to see what kind of crazy videos awaited me.

The service consists of six roughly two-minute shows. Although there have been a few changes along the way, most of the shows that originally launched with the service last summer are still airing. One of my new personal favorites, due to it being as equally hilarious as it is utterly ridiculous, is one called Mainichi 3D Date, which could be translated as Dating in 3D Everyday. Like I said, this is the first time I have watched any of these programs in months, and boy, this episode was a lot different from what I saw four months ago. In the early episodes, the television company essentially walked around with a camera pointed at a cute Japanese girl as she talked toward them and occasionally fell down on the ground needing your "assistance" to get up. It was basically a non-interactive 3D point of view dating show. The episode I watched today was completely different. The girl, who was dressed like a reporter, took us to the heart of Akihabara and to a cosplay salon (yes, they apparently exist). The girl gives the beautician a silver-colored wig and then tells her how it she wants it to be made. After she’s done coloring the wig blue and significantly shortening it, she gives the finished product back to our lovely host. Shortly thereafter, she changes into her outfit, which is actually a school girl version of Rei from Neon Genesis Evangelion.

The video itself is only around two minutes long, so viewers really don’t get a chance to see step by step what cosplay beauticians go through. It is nice to see that the show has somewhat evolved from just a virtual date and is expanding on the otaku appeal by including bits of information that many Japanese people probably don't even know about. For me, it was interesting to learn that if James Charlton and I want to dress up as pretty anime girls, we can.