New does not stand for "Nearly Educated Wario". 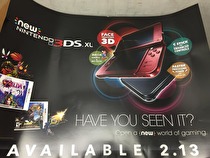 A release date of February 13 for the New Nintendo 3DS XL is likely according to leaked promotional materials from GameStop.

The poster revealed that the New 3DS XL system would be launching alongside two big game releases, The Legend of Zelda: Majora's Mask 3D and Monster Hunter 4 Ultimate, the latter of which is officially confirmed to support the C Stick.

While this news is not official, there will most likely be a release date given during this Wednesday's Nintendo Direct. Stay tuned to Nintendo World Report for further coverage.

Hmm, that's sooner than I thought. I was expecting March.

Still a month too long.

Anyways, according to the 4chan leak (which is a site you can always trust), the "leaker" said it would be released Jan. 26th so looks like that leak is already debunked in case anyone was putting much faith into it.

Seems ok, but why would any retailer have this information already. I wouldn't think Nintendo would give merch until later on. how do we know this isn't from australia