The developer of the hit Batman Arkham games could be behind a TMNT title for Wii U. 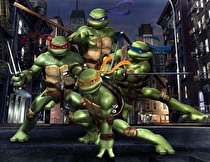 Rocksteady Studios is working on a new Teenage Mutant Ninja Turtles game for the Wii U, Xbox 360 and PlayStation 3, according to rumor posted by Paul Gale Network.

According to the source, the title of the game will be TMNT: Manhattan Crisis. The title is set to have all four turtles as playable characters, and will include several classic TMNT characters like Rocksteady and Bebop, Doctor Baxter Stockman, Shredder and Krang. In flashback stages, players will take on the role of Master Splinter.

Gameplay-wise, the game is believed to have progression similar to that of the Batman Arkham games. The turtles will be using several weapons like shurikens, smoke bombs and grappling hooks. The turtle van and the turtle blimp will be featured in the game as well. The graphics engine will be the same one used on Arkham City, and the Wii U controller will play a role in the weapon selection.

Rocksteady Studios is the developer behind the critically acclaimed Batman Arkham games, the second of which is scheduled to be ported to Wii U. Regardless of Rocksteady's alleged involvement, TMNT in general is set to make a return. Nickelodeon now owns the rights to the franchise and is working on a new computer-generated series that will air sometime in 2012.

I hope we get a trailer and possibly a launch date at this year's E3.


It would be interesting to see Rocksteady Studios make a Teenage Mutant Ninja Turtles. Has the studio been staffing up? This would be two projects in two years. Also, I assume the Wii U version of Batman: Arkham City is not a trivial task.

From what I've read, Imagi Studios was gearing up to produce a sequel, but the box office failure of Astro Boy pretty much tanked the studio. But yeah, I totally loved the CGI movie, and was so disappointed to learn that the next flick would not only be a reboot, but a return to the clumsy live action costumes...  :(

As soon as you said Rockstead you got my attention!  They done a phenomenal job with both Batman games, so I hope they do the same with TMNT!

Hasn't this series been reinvented, like, 6 times in the past decade? Not really interested. Although if anyone can make a capable modern-day brawler using licensed characters, it's Rocksteady, so we'll see...

From what I've read, Imagi Studios was gearing up to produce a sequel, but the box office failure of Astro Boy pretty much tanked the studio. But yeah, I totally loved the CGI movie, and was so disappointed to learn that the next flick would not only be a reboot, but a return to the clumsy live action costumes...  :(

*Hits you over the head with a rolled up newspaper*

That's a bad, Joshnickerson! We don't spew shit all over the floor. Now go outside and think about what you've done.

Hasn't this series been reinvented, like, 6 times in the past decade? Not really interested. Although if anyone can make a capable modern-day brawler using licensed characters, it's Rocksteady, so we'll see...

Yeah, there were a ton of shitty Batman games before the Batman Arkham games came out. Only like 3.5 of the Ninja turtles games have been good.

and joshnickerson....I love the live action costumes, the only time CG should be used for Turtles is in fight scenes or extreme action scenes. The CG movie was good though. I know this is a reversal in opinion from planet of the apes, but ninja turtles live action makeup were perfected by the Jim Hanson company. Actually if you did a really good mix you could have perfect turtles. Say the faces are partially CG and the rest of the body is real, that would work out pretty well.

I liked the CG movie, too. My only persistant complaint with the Turtles (and I've been a fan since the original comic series BEGAN) (yes, I'm old) is that nobody has differentiated them on a physical level EXCEPT the Image series which nobody liked except me. Different-colored bandanas is a cheap way to differentiate them.

Anyway, this is exciting, but the idea that this will be set in the 1980's cartoon aesthetic makes me cringe. There are far more interesting ways to go with this, especially after Batman. The original series was very violent, the brand-new (and awesome) IDW series is the same way. The Archie Adventure series was an excellent and far-better follow-up to the cartoon. They could even go the way of the 2003 cartoon and I'd be happy.

The 80's cartoon was satire at it's finest though. Why go the lame voilent route?

I'd actually like the voice actors from the live action movies instead. This just blew my mind but the VA actor for Splinter also did elmo. How the hell is that possible?

lol, elmo. I could see that. Mainly because I know what the elmo actor looks like. Its not like either is a hard voice to do. Raspy japanese accent, high pitched puppet voice. Though my elmo prolly sounds like Herbert from family guy.

Well, at least it's not another Batman game, assuming this rumor is actually true.  I really enjoyed the Arkham games, but 3 of them would have been way too much.  But seriously, why base a new game on the horrible 80s cartoon?  Seriously, try to watch it now and tell me with a straight face that it was a good show.  Even Turtles Forever, the awesome Turtle team-up movie that capped-off the 2000s Turtles series, couldn't take the 80s show seriously even as it was one big homage to it (and several other Turtles incarnations).  I find it much more likely that the new Turtles animated series uses elements from the 80s series, and that's what this game would be based on.  If so, I was and remain a big TMNT fan, so I'd definitely pick this game up.  Hell, I'd probably buy it even if it was based on the 80s series just because Rocksteady was the developer.

Plus, I mentioned Baxter Stockman but it never explained if it would be the fly version or the scientist version from the comics and the 2003 series.

I would be way down with the 80s cartoon aesthetic. I like both the Arkham games quite a bit (though moreso the first one), but the art design is for the most part terrible. Mr. Freeze and Scarecrow are good, but that's about it. I feel like if they took the Arkham approach to the Turtles it would be a bizarre, ugly, Bomberman Zero-y mess.

But Pedro, the Party Van and Turtle Blimp have ONLY appeared in the 80's cartoon. Same with Rocksteady & Bebop and Krang. Although, to be fair, the IDW series is probably going to reinvent those characters in the future.

I refuse to purchase this game unless Bebop helps out in the development as well.

I would prefer that this game retain the gritty art style of the Arkham games. The kid freindly atmosphere  of the 1980s cartton just wouldn't fit in a good game for me. Although the characters of that series should return, Rocksteady should put its on aesthetical design to the characters instead. The Technodrom and those robotic unicycles with the whips for arms should appear as well.

well the 80s cartoon hasn't held up well, but it wasn't just the cartoon it was a phenomenon. There were comics, movies, cartoons, toys, and video games. None of them were consistent really. I was really excited gamecube era when they revived the Ninja Turtles cartoon. The newer version wasn't perfect, but it had its moments. Somewhere between all the different variants of Ninja turtles is a perfect version of Ninja Turtles.

Actually, I hope this game goes back to the original arcade games and tries to reinvent those genres.

What I would like to see is a robust beat'em game based around team combat that is still traditionally a side scrolling game.  No platforming to mess up the experience.  And keep the game fun and light hearted, although a less cartoony artstyle could be implimented.  I think the recent cartoon series did a good job of being gritty but also being light hearted and fun.

I would then make the splinter levels be a single player experience with very different stealthy ninja game play.  More like you would expect from the creators of the Arkham series.  This would allow for a game can deliver on the full potential and expectations of a Ninja Turtles franchise game.

These will probably be stealth/ninja type games. Batman is just a ninja in bat clothing.  Ninja Turtles just happens to be a reputable brand when it comes to Ninjas. Which sounds awesome, because there hasn't been a super stealthy ninja turtle game as far as i know, but it could work out. Also, no stealth game is ever multi player, and that could be potentially awesome.