A premium-priced horizontal shooter complication lacking in variety and features.

I’ve reviewed a handful of compilation titles that have come to Switch over the past few years, and some of them really stand out for the way that they lovingly pay homage to the classic titles they contain. Stellar emulation is definitely a selling point, but historical materials like concept art and developer interviews really make some of these collections worth picking up. Being able to customize the experience and difficulty is another element that separates the superb from the subpar, and unfortunately, the Darius Cozmic Collection offers little in the way of extras. This review is for the Console version, which features nine total games, but you may want to take a longer look at the Arcade version if you’re looking for a Darius-flavored horizontal shooter fix. 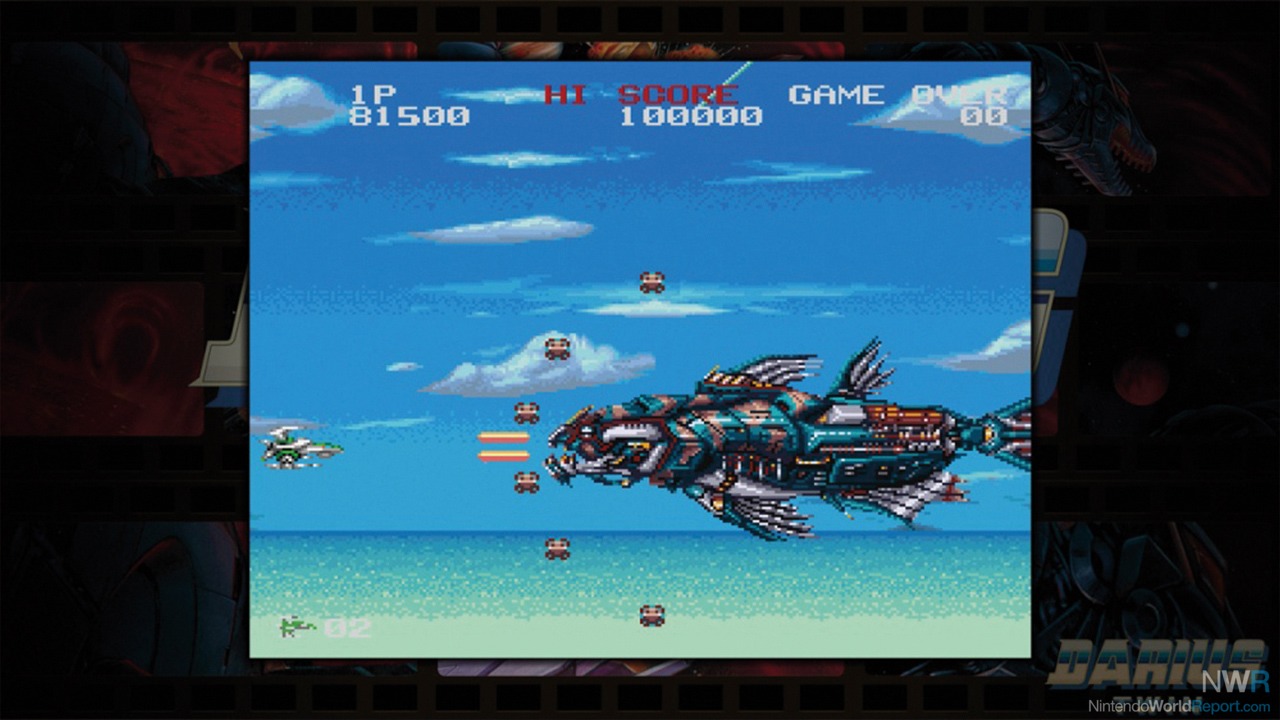 The first three games are different console ports of the Darius II arcade game, beginning with Darius II for the Mega Drive, then Sagaia for the Genesis, and finally Sagaia for the Master System (originally released in 1990, 1991, and 1992, respectively). For the uninitiated, Darius titles are known for co-op play, three different power-ups (red for gun, blue for shield, and green for bomb), and a branching path stage selection, but these aforementioned titles don’t actually maintain the two-player co-op of the arcade version. The Mega Drive and Genesis games have a total of 28 zones, while the less powerful Master System Sagaia only has 12, and these suffer from noticeable slowdown. Each zone ends with a challenging boss fight, and even the early stages themselves and certainly the later ones provide a hefty challenge. In the options menu, you have three or four difficulty modes, you can make slight adjustments to the number of lives, and you can select one of two starting ships. The Tiat Young starts off with more firepower and never goes below that starting threshold; the Proco Jr. starts off with a basic gun and bomb, and always reverts back to that upon death.

The next two games are the Japanese and Western releases of Darius Twin, which came first to the Super Famicom in early 1991 and then to the Super Nintendo later that same year. Despite having fewer stages than Darius II and the Sagaia games, Twin has two-player co-op and 11 stages in total (seven played in a single run), some of which feature vertical and diagonal scrolling in addition to the standard horizontal scroll. One element that can make Darius Twin a greater challenge is the fact that there are no continues. A counter-balance to this is that once you’ve reached a certain power level with your armament, you never fall below that level even if you lose a ship. 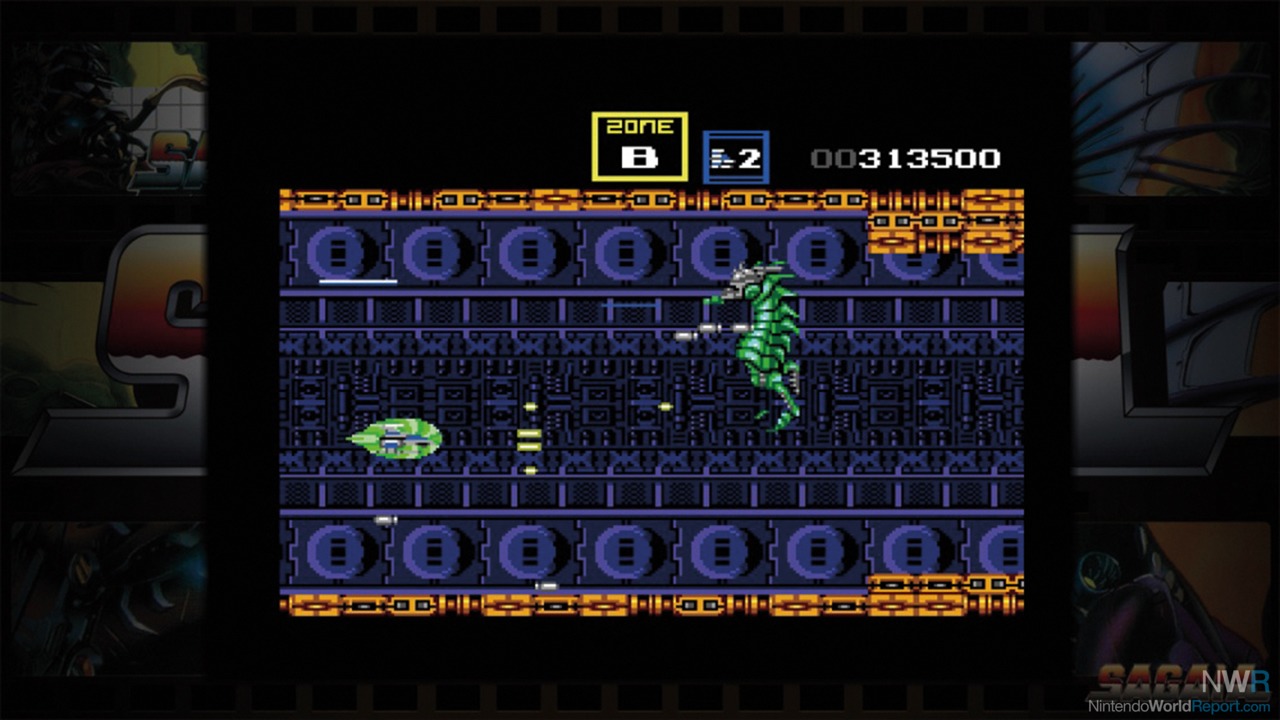 Two years later brought the release of Darius Force and Super Nova, Japanese and Western versions of the same game, which was not a port of an arcade title. You begin by selecting one of three different ships that have different gun types and then navigate your way through 15 zones in total, about half of which you see in a single run. There are mid-stage branching paths in these games, but dying takes you back to the beginning of a stage or a checkpoint if you reach it. Another quirk in this title is that bombs and the main gun power-up together, and you can choose to fire them both at the same time; however, doing so reduces the strength of each weapon by one level. There’s no two-player option here, and the fact that you don’t immediately respawn makes these two titles some of the hardest in the Collection.

The final two games are oddities among the bunch. Darius Alpha for the PC Engine released in 1990 but was never available for people to purchase, instead being part of a special promotion for those who bought Darius Plus (also for PC Engine), which is the final game in the Collection. Alpha is a boss rush with score and time attack modes, in addition to a 4-minute time trial mode. Plus is a scaled-down version of Super Darius (for the PC Engine CD-ROM), and as it turns out also a port of the original Darius (not confusing at all, right?). Rather than a map that shows you the branching paths at the end of each stage, you actually just navigate up or down after the boss fight to choose your route. Darius Plus also shows your gun, bomb, and shield levels at the top of the screen, which is helpful to gauge your progress but painful when you get shot down and lose everything. 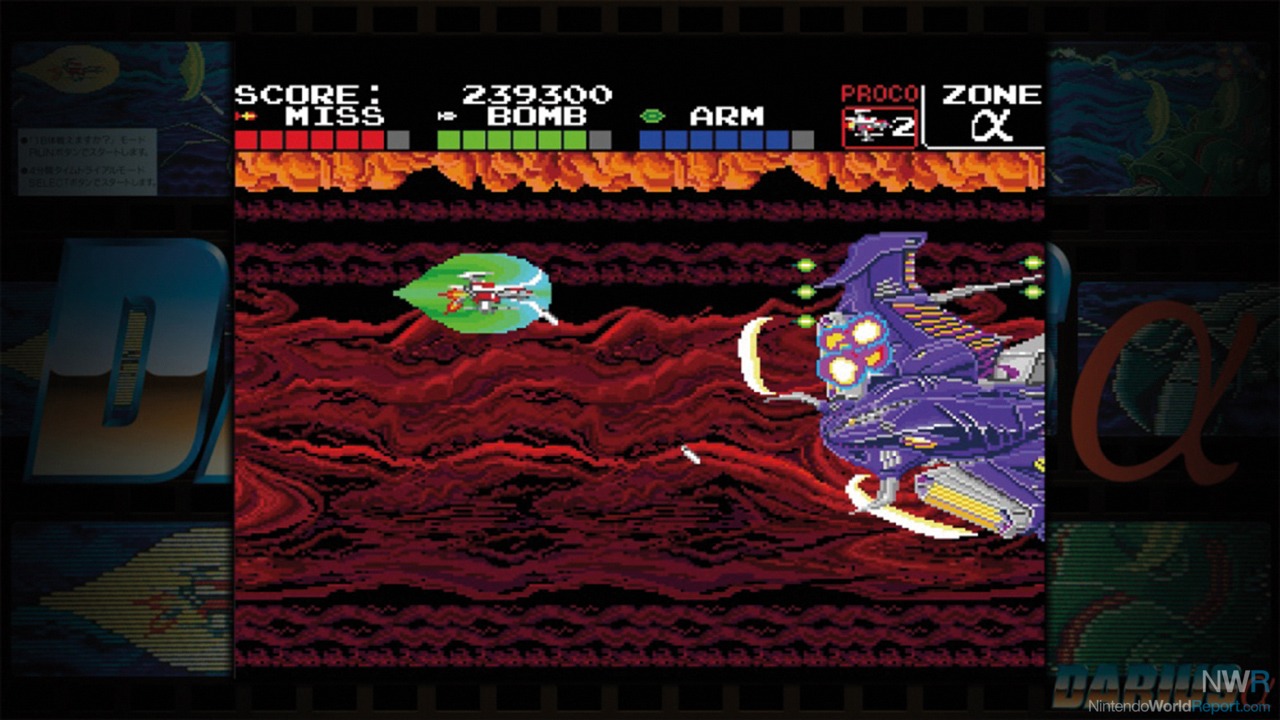 Overall, the M2 emulation and menu navigation are certainly strengths of the Darius Cozmic Collection Console, but at the end of the day it feels much more like four titles than nine, given how similar some of these versions are. Some of the games have online rankings, which adds to the replay factor, but there are no historical materials on offer, and the game balancing options are incredibly sparse. There are some decent screen options, and being able to remap all of the buttons is nice, but it’s hard not to see this package of Darius games as being light on firepower. We’ve seen much more robust compilations come to Switch, so I can really only recommend these games to true Darius diehards.

I definitely plan to pick this up when it goes on sale on the eshop like I do for all of the retro collections on Switch.