A highly entertaining adventure with some unquestionably weird story quirks.

Fire Emblem: Three Houses is one of the biggest steps in series history. From open areas to a more dynamic battle system, the franchise’s return to home console contains a lot to admire. When I last spoke about the title, I was over the moon with every aspect. Interacting with the characters was charming and the missions provided a back-to-form attitude that I sorely missed. In comparison, the second half of the game sticks the landing with most of these elements, but also creates brand new problems along the way. Three Houses is a highly entertaining game that showcases its biggest faults only in the second half or in a secondary playthrough.

Three Houses sees you traveling all across the continent of Fódlan. In the first half, you will be mostly stuck in Garreg Mach Monastery. At the holy space, students train at the Officer's Academy to figure out the rest of their lives. You see the children of nobles, kings, or highly gifted commoners. The breadth and depth of the individuals is staggering, and showcases the major thing this Fire Emblem gets right: character building. Every student and professor has their own story arc that you can partake in, if you so desire. They are completely voiced, offer unique interactions, and give you information that is only hinted at otherwise. What I love about support conversations is that they have context and keep the point of the story in mind. Sadly the most important support conversation, normally reserved for true friendship and marriage, has a far lessened role as only the player character can achieve S-rank relationships.

At the beginning, you choose the group that you will lead at the Monastery. Does it really matter if you pick the Black Eagles, Blue Lions, or Golden Deer? For the first half of the journey, your choice really doesn't play that big of a role. Outside of the different students, the monthly missions from the Church are the same. There are a couple of different paralogues, depending on what you pick, but the plot lines don't really change. You see the same cutscenes, meet the same people, and head towards the same endpoint. That makes a secondary playthrough go a bit slower than anticipated. While the playthrough can still be enjoyed, I did wish that the branching off point would be a bit later. Even on New Game+, you have to go through the same tutorials and slow build up as before.

Towards the end of the first half, the story takes a turn and branches off in specific ways. A war is on the brink of starting, and depending on the route you picked, you may have to pick yet again. In either case, the events throw you into a time skip, kicking off the second half of Three Houses. While the strong character building continues, the stories can leave you feeling a flat by the end. Not every final act is bad or disappointing, but I was left confused mostly. In one of the routes, the story just ends after a rather short second part. As that was the first route I ever picked, it left me with a sour taste. To complicate all that, certain story beats are only told in one line and not another. 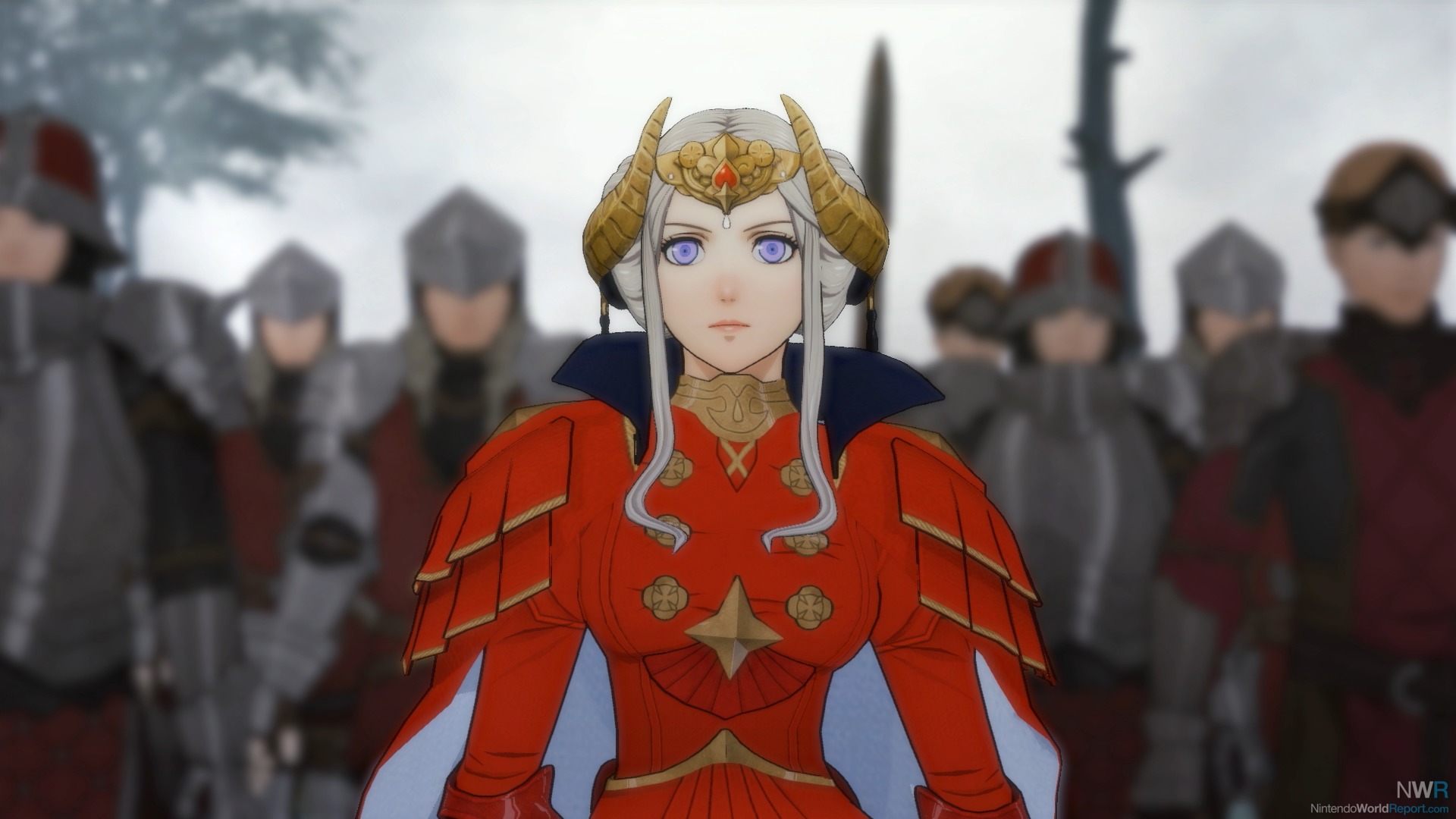 Despite those setbacks and disappointments, I continued playing Fire Emblem: Three Houses like there was no tomorrow. The gameplay in Three Houses has been refined to form a highly entertaining experience. I really enjoyed exploring the grounds of Garreg Mach Monastery, where you can freely explore as you see fit. The space is massive with a variety of facilities and characters to meet up with. You can build up relationships with different characters, even if they’re not in your house, and maybe even convince them that they should join your side. You can go fishing, try your hand at gardening, or just interact with every single thing in the world. It is so refreshing to go off and do something new every in-game Sunday.

Battling is boosted by a number of improvements. It is still the strategy experience that Fire Emblem fans know and love. You make moves on a grid-based board, making those decisions carefully and forcing friend and foe alike to the frontlines. A lot of the basics still apply, but a lot has changed under the hood. A strong example is the return of Weapon Durability, allowing for a system with greater checks and balances. Unlike previous entries where you were left defenseless though, the weapon still works with reduced statistics. In general, Three Houses allows you to think more outside the box, which I appreciated.

Another welcome element is Combat Arts, where you learn special abilities by becoming proficient with a weapon type. Unlike in the Shadows of Valentia, where these attacks would drain your HP, they now take up more of a weapon's durability. The player is free to mix and match weapons and arts as long as they are in the same category, which makes battling more engaging. They are more effective with more expensive weaponry, which creates another matter that you have to keep in mind. The funds that you receive from battles and the church isn't unlimited, but you can always fish or grow fruit in the monastery for added money. That offers more of a choice between building your relationships with students or raising funds for their weaponry.

Once I had the money, I adored making usage of the Gambit option. By heading over to the Battalion Guild, you can hire some men that can help you out in battle. By finishing quests or paralogues, you earn brand new battalions to hire. Every group can only be used by one unit, coming with one ability that can help out with offense or defense. A bunch of mages restore the health of multiple units, warriors attack with a vicious stampede, and archers shoot arrows in a large group. If you are successful, you can stun an opponent and force them to stay promptly in place. In addition, it is incredibly helpful to destroy beasts as you can stun them for a limited time. The beasts have multiple health bars, vicious attacks, and specific weak spots. 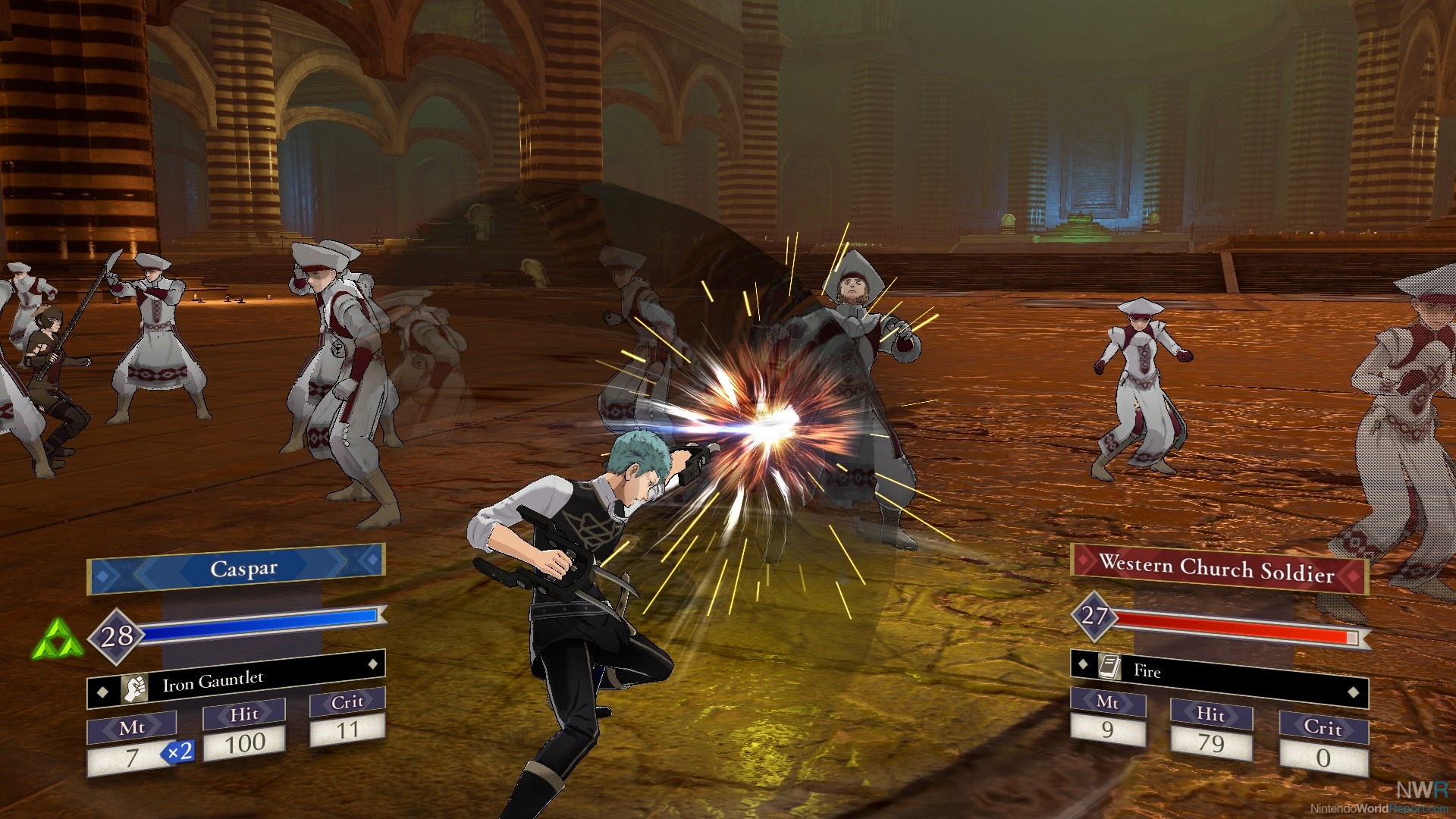 The look of Fire Emblem: Three Houses is incredible for the most part. The world and character models have a unique design philosophy that I've never seen in a Fire Emblem game before. It was clearly the right call to change the character design, just for the sake of creating something unique. With that being said, you can clearly see that Koei Tecmo made this video game. Characters clipped through the environments a few times, taking liberties where they could and should walk. In addition, while exploring the monastery, not every movement seemed smooth. While the battle animations were quite lovely, weird lighting make them look awkward now and again. That being said, all these small things don't take away from the overall grandeur of the graphics. On the other hand, the music left me more puzzled.The songs themselves are absolutely fantastic, bringing some wonderful tunes to the world of Three Houses. That being said, battle music repeats a lot while event scenes usually get a unique piece. It seemed unbalanced.

Fire Emblem: Three Houses is great in a lot of respects. The game flies by with its various mechanics, making for a highly entertaining adventure. That being said, I can't shake off the feeling that the final acts in the various routes could've been better. When I spent 60 hours on singular route, only to be greeted with a bummer of an ending, it stung a lot. Combining the crapshoot of your ending with a few technical problems drags the whole game down. The actual character arcs, complete with fully voiced interactions, do a great job of accounting for the limitations, thankfully. Three Houses is certainly worth seeing through, but it is way more about the journey than the end.