A sad glimpse at what could have been

In case you missed it, Starlink: Battle for Atlas underperformed. What was set to be a long running IP with regular updates and new content will likely end here. The Crimson Moon update, and by extension the Star Fox DLC, is one final salute to those who have joined the Starlink crew on their unique adventure through the Atlas system. It is at once both a sad way to end what could have been a fantastic series and an unexpectedly kind gesture to fans. While it doesn’t answer every question set out in the surprisingly rich lore of the base game, it does serve to give us insight into both the universe itself and a glimpse at what could have been.

Crimson Moon consists of two parts. It encompases both a massive free update and optional paid DLC. While the free update and much of the DLC is available on all platforms, the Switch version receives exclusive Star Fox content. A fitting bonus given that the Switch version was purported to represent as much as 80% of the total sales of Starlink. While I came away from the experience as a whole very pleased, I was somewhat surprised by what was free and what was paid.

Let us start with what everyone can get for free in this update. Before we get to the titular Crimson Moon, there are some subtle changes that have a big impact on the game. Much like the holiday update, new enemies will now appear on planets in the form of outlaw Mechs and Tanks, which both present a substantial challenge. Certain enemies will also now be marked with a star rather than a level, which indicates that they will scale based on the level of the player. I quickly went from ruling Atlas with both Fox and the Arwing maxed out to being easily put in my place if I wasn’t careful.

The Crimson Moon is an entirely new planet that appears in Atlas to host a series of competitions. This includes four races and a horde mode like colosseum. To my surprise, the racing mechanics are actually quite solid, though they do take some getting use to. In order to accommodate racing rather than space combat, the controls are adjusted significantly. You still accelerate by tilting the left stick forward but you now boost with R while using holding L to drift. Boost power-ups are strewn across the track to refill your boost meter. You can also get a boost from pulling off barrel rolls in mid air and from skimming over boost pads. Once you get the hang of it, you’re left with a mode that put me in mind of Star Wars Episode 1: Racer. While there are only four tracks, there are plenty of optional shortcuts to uncover, and the tracks themselves are quite lengthy. The hardest track took me just under eight minutes to complete. The colosseum mode isn’t quite as interesting. It is, as one would expect, a series of waves of enemies which gradually get more difficult. Completing races or rounds in the colosseum earns you outlaw cogs which can be spent to unlock paint jobs. You want a solid gold Arwing? Pimp that Arwing out to your heart’s content.

On top of these competitions, the Crimson Moon update also brings with it two surprisingly extensive story questlines. One sees you searching out odd power signatures that ultimately give you a glimpse into Atlas’s past and learn more about the Wardens who once ruled it. It helps fill out the lore and answer some questions left over from the base game. The second sees you hunting down outlaws across the entirety of Atlas. To capture them you’ll make use of the new grapple system which allows you to tether to unshielded ships, wearing them down until you can eventually capture them. Once captured you can drag them back to newly placed prisons throughout Atlas. Even outside of this quest you’ll find wanted outlaws who will provide a tough battle and an opportunity for large rewards.

Finally, there is the paid content. This takes the form of new ships and pilots. While the new ships are weighted more towards tank style builds rather than my preferred agility focused style, I did enjoy mixing their individual parts into my favorite ships. With the addition of the aforementioned paint jobs, any wing can match any cockpit making for much more pleasing designs. Exclusive to the Switch version are the three Star Fox pilots, who can be purchased in a set. Purchasing the Star Fox team also unlocks an additional mission for them once you complete the base game’s Star Fox quest line. The characters themselves, however, can be used throughout the entire game should you be starting a new game or if you’re playing for the first time.

This new story quest for the Star Fox team sees Fox, Falco, Slippy, and Peppy going up against the previously-absent members of Star Wolf. The story itself is nothing particularly exciting. Pigma, Leon, and Andrew show up in Atlas to cause trouble and you need to find them all and stop them. The characters themselves are all excellently portrayed and feel more in character than Wolf did in the base game (since when did Wolf want to take over Corneria?). Each member of Star Fox has their own unique pilot skill which they will need to use to take on their respective rival within Star Wolf. The DLC features some fun spins on the existing Starlink gameplay and culminates in a pretty cool final boss fight. It also serves to put a nice bow on the Star Fox team’s time in Atlas. Unfortunately, there is only about an hour worth of story content here. When it comes right down to it, your perception of the value of this DLC will likely rely on what you think you’re buying. If you think you’re buying twelve dollars worth of new story content you’ll probably be disappointed. However, if you see it as three new fully voiced characters playable throughout the entire game who also come with their own small quest, things may seem a bit more reasonable. For myself I did feel surprised that the massive Crimson Moon update itself was entirely free, while the comparatively small Star Fox content was paid.

Crimson Moon and its assorted free and paid content are all of solid quality. Some of the best content is in fact free, meaning that even if you’re done spending money on Starlink, it is worth taking the time to revisit it for this update. If you’re hankering for more Star Fox adventures (no pun intended), then take that extra step and call in the team. Ultimately, it serves as an unexpected but welcome send off to a game that sadly ended too soon. For the faithful, attach that giant plastic Arwing to your Joy-Con one last time, and head back into Atlas.

Review codes were provided by Ubisoft for the paid content.

It's a bummer Starlink sold so poorly, but it good to hear its probably last bit of new stuff is cool.

Hoping this leads to the same team doing a proper Star Fox sequel. I plan to get the SF DLC soon, when I am able to set aside some time to play the game in more depth.

Hoping this leads to the same team doing a proper Star Fox sequel.

Ubisoft is probably on their hands and knees begging Nintendo to let them make a Star Fox game in the Star Link engine so they can recoup some of the money they lost with Starlink and considering this team has already proven itself more than capable of the handling the Star Fox brand, and Nintendo certainly doesn't mind farming a new Star Fox game out to some third party developer (see Star Fox Assault and Star Fox Zero) I'll be surprised if Ubisoft Toronto's next game isn't a Star Fox game.

I loved Starlink, so I will be sure to check out the new content

I loved Starlink, so I will be sure to check out the new content

This is where I'm at, and the review only further cemented that for me. :D

Wasn't going to bother with the DLC since I haven't played it in a while. Been giving it another spin lately so may grab some of that additional content.

Those pirate mechs are a pain. 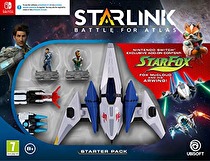