It’s hard to imagine living in a time where the entire world wasn’t mapped out, but for a long period of human history this was the reality. Anything could be beyond that great horizon, and explorers from all over were willing to put their lives on the line to sate their curiosity: animals they had never seen, people they had never met, wonders they could never even imagine, and (most importantly of all) riches beyond their wildest dreams. This era of discovery is what developer ArtDink’s exploration title Neo Atlas 1469 seeks to capture, and it would be doing a pretty decent job if it didn’t stop you every ten seconds to talk about the cool fish off the starboard bow. 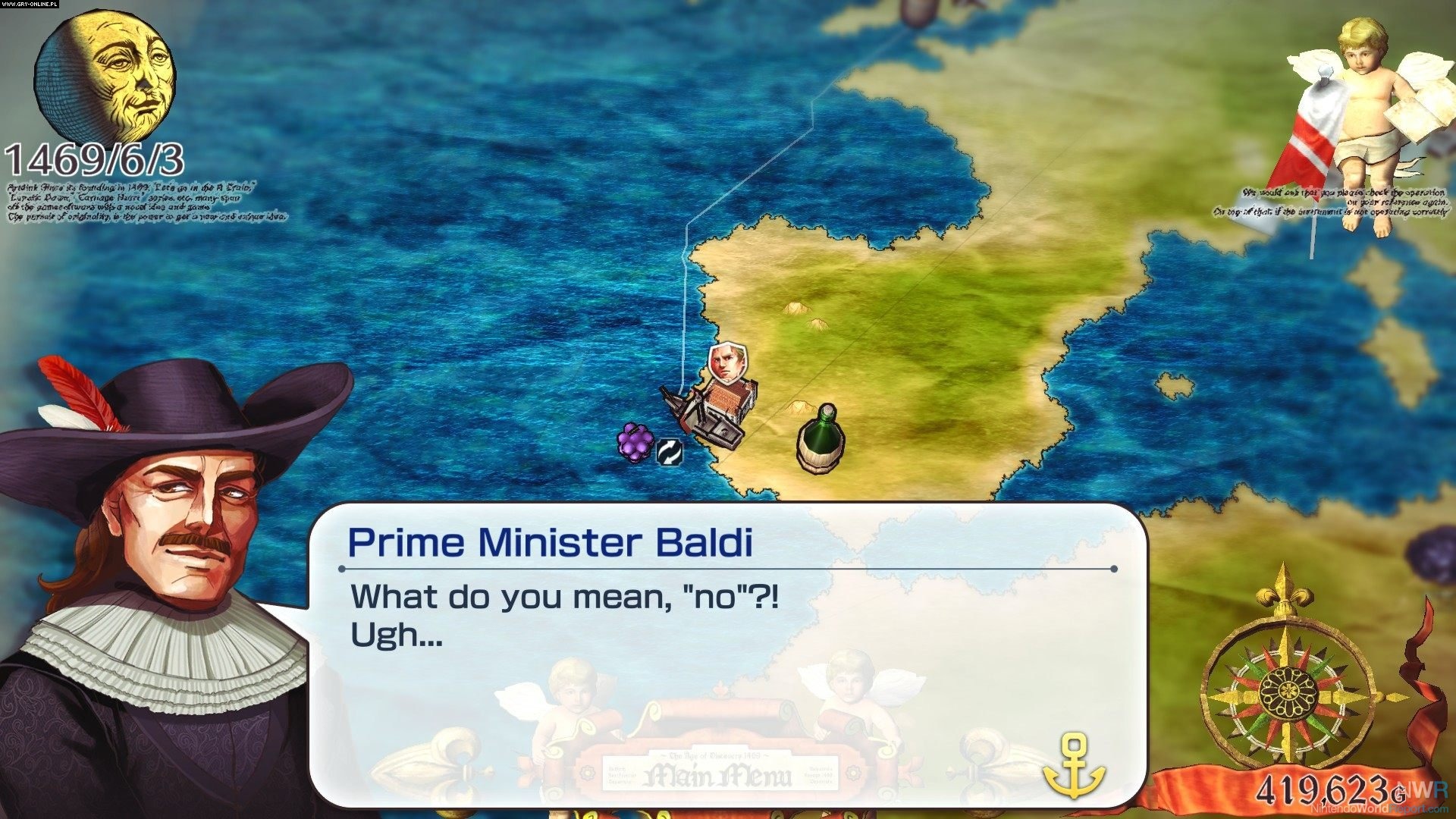 In Neo Atlas, you take the helm of a Portuguese trading company in the year 1469, operating within the small confines of the known world. Your company is given an exclusive contract from His Majesty the King not only to set up trade routes around the world but also to expand the map and bring new and exciting riches to Portugal. Through this contract, you are given your main goal: within 30 years you are to discover the mythical eastern land of Zipangu, where everything is said to be made of gold. By making use of exploration fleets led by their various admirals, the player must uncover the map of the world while making progress eastward (or westward if they’re feeling especially daring), building their capital by establishing trade routes all around the world and slowly but surely pushing towards that sparkling land.

One issue that may come to mind at the beginning of a run is that there’s not much to discover when you already know what a map of our world looks like. The game begins on a very familiar looking map of Europe and northern Africa, leading players to assume that the map they end up with will be the one we all learned in school. This is not so! As players explore, they will quickly realize that continents and land masses are not the shapes they’re familiar with. This is one of Neo Atlas’s most interesting features, and one that truly makes the player feel as if they’re exploring a world that nobody else has seen. The player even has a small amount of control over the random generation, allowing you to send a fleet out to redo their expedition if their discovery is not to your liking.

This feature does bring with it some unfortunate problems that I found hard to ignore. For instance, the game does not seem to have any method of differentiating a landlocked body of water from the ocean, sometimes placing port towns on the shore of a lake with no actual way of ever taking advantage of it. Towns do not appear until you’ve accepted your fleet’s discovery, meaning optimally you never want to find anything not connected to the ocean. The completely ship-based trading mechanics also mean that large land masses are basically worthless, with small islands being the most optimal map to generate. The inclusion of a caravan mechanic or something similar would have largely fixed both of these problems, but as far as I could tell there is nothing of the sort.

Throughout the game you will acquire multiple admirals each with their own stories, personalities, skills, and wages. For example, Marie Almeida has a high charisma stat that allows her to house her fleet even in towns that are distrusting of foreigners, while Luis Baldi makes up for his lack of charisma with his battle skills on the high seas. These stats decide whether a fleet will survive an encounter with pirates or how far they’re able to travel in a single voyage, but the more useful the skill or the more experienced the admiral, the more you will have to pay them in wages at the beginning of each year.

Speaking of voyages, every exploration fleet can be sent off to chart out the unknown parts of the world and clear out the fog of war, but this is where the majority of the game began to fall apart for me personally. You begin by drawing a route for your fleet to follow and then set them on their way, waiting patiently for their return. Once they have made it safely back home, you will then be forced to sit through a slow-paced cutscene detailing exactly how their voyage panned out. There is no way to skip or fast forward through these cutscenes and to make matters worse the admiral of the fleet will stop every few seconds to tell you about how they saw a really fast dolphin swimming alongside their ship.

And really that’s where most of my personal issues with Neo Atlas 1469 lie; it did not seem to have any respect for my time. The beginning hours of my run were comprised of the game letting me move the camera for a few seconds before yanking control out of my hands to show me yet another tutorial or introduce another group of characters into the story. While the characters were fun in their own right, the plodding cutscenes getting in the way of letting me actually play the game quickly soured me on the entire thing, causing me to shout in frustration whenever they occurred. This becomes less of a problem during the second half of the run once all tutorials have been shown and major story moments become more sparse, but by that point the damage is already done.

Playing Neo Atlas 1469 is not unlike playing an unfamiliar tabletop game with that friend who refuses to let anybody start until they have meticulously studied the rulebook. The game may be fun in some ways, but after an hour of having the instruction manual read at you, you’re likely going to stop caring about this game and decide to move on to the next. There is an interesting exploration game to be found within Neo Atlas 1469 with its appealing map generation and likeable characters. I just wish it would stop talking every once and awhile and let you experience it.