As long as you can make sense of the onslaught of characters, modes, and options, Super Smash Bros. Ultimate is a masterpiece.

Super Smash Bros. Ultimate is a giant, almost unwieldy fighting game from Nintendo. With more than 70 characters, 100 stages, 1000 collectable Spirits, and 800 music tracks, the latest entry in Nintendo’s venerable series is jam packed with loving winks and nods to video game history and ways to constantly interact with these references. It’s dizzying, but thankfully no matter how daunting the new World of Light adventure mode is or how long it takes to unlock all of the characters, the core of Super Smash Bros. Ultimate is as fun as ever. This might not be the flawless pinnacle of the Smash Bros. series we may have expected when it was announced that everyone is here, but it’s a wondrous ode to Nintendo’s game history coupled with deep and hilarious combat.

The heart and soul of Smash is the multiplayer, and Ultimate changes things up quite a bit, mostly for the best. Getting into a match, however, requires some prepwork. The menu and UI design is somewhat confusing, with the lowlight being a radial menu that isn’t actually a radial menu. 100+ stages are available right away, so making any sort of sense out of the stage selection screen is a fool’s errand. Only 8 characters are available when you start up, which is a little on the low end. Unless you look into some way to game the system, it will take you hours and hours to unlock the full roster. I enjoyed the thrill of unlocking the characters, but it seems a little too ill-defined. It also doesn’t help that if you lose the match against the new challenger, you have to wait an unspecified amount of time to try the match again. This isn’t communicated particularly well, and it makes the march to unlock the full roster frustrating. 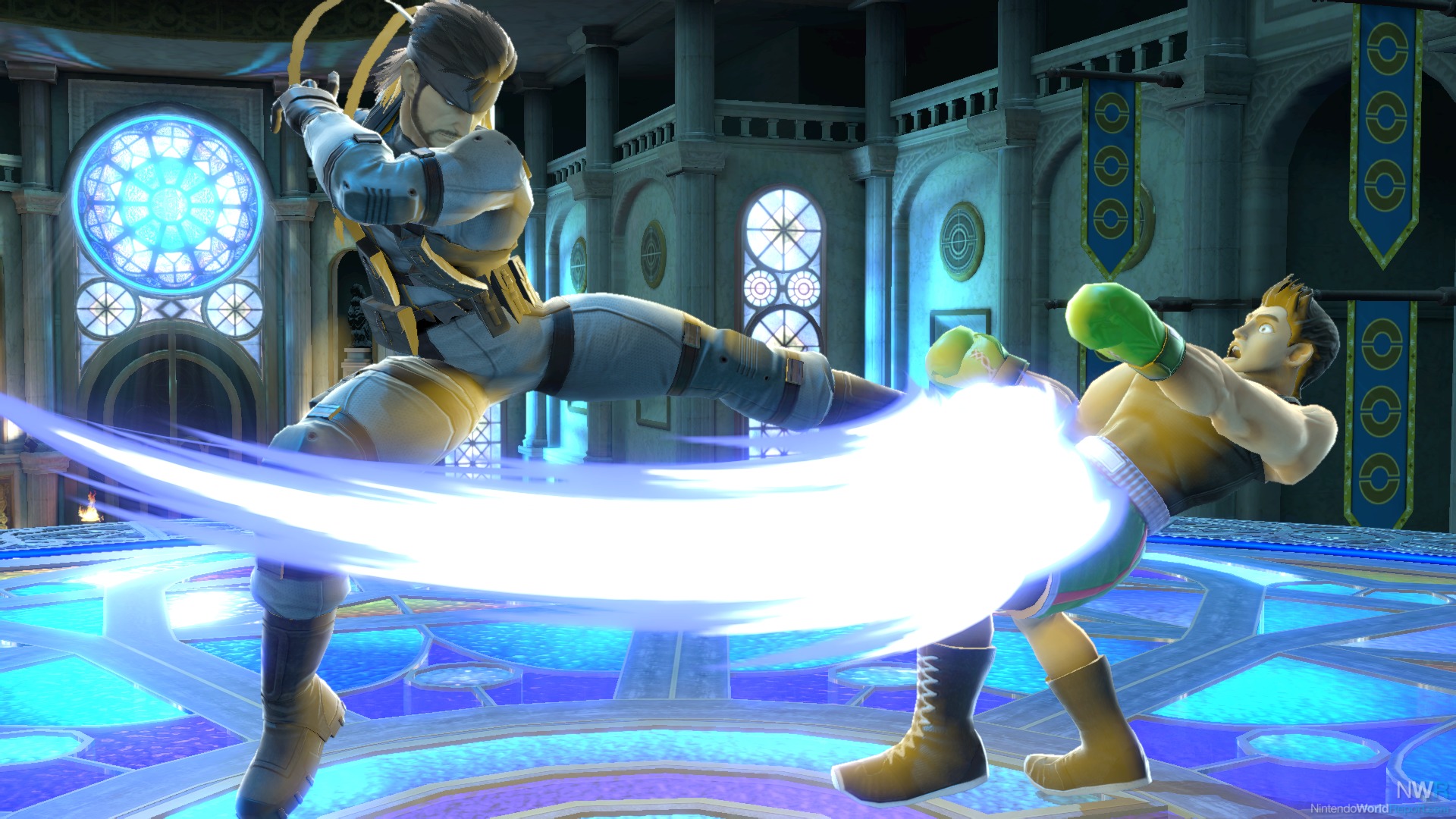 When you get into the smashing, everything’s awesome though. The speed of matches feels more frantic, which plays into the party game atmosphere and winds up being more chaotic. A slew of other changes are present as well, including tweaks to ledge grabbing and shield dashing that might mess up some strategies. From my hours of multiplayer fun with friends, the more chaotic bent is what I wanted out of this game. Matches have more flourish now, with dynamic zoom-ins for game-ending and meteor hits being highlights. Ultimate doesn’t reinvent the wheel, but it doesn’t have to. It just needs to refine it, which it does through elements like Final Smashes being more one-off attacks than long user-controlled digressions or the numerous methods of displaying or not displaying score and lives. Unfortunately, while the local experience is magical, the online multiplayer seems to be mired in the same morass as past entries. Ideal circumstances are required for online to work well, as the multiplayer is seemingly dependent on everyone’s connection being strong. When it does work, it’s fine, but from my experiences, it doesn’t seem to work well as often as you’d hope, especially when more than two players are involved. Making it worse are the limited options for online play. Playing with friends generally requires outside communication to set up matches, and the matchmaking doesn’t have a good way to separate those who want to play in different ways. For Glory and For Fun modes are a thing of the past, and if you’re looking for serious competition, Elite Smash is the only option, but that’s gated off to players of a certain rank. On the whole, the online in Ultimate is rough, both in terms of reliable connection quality and play options. 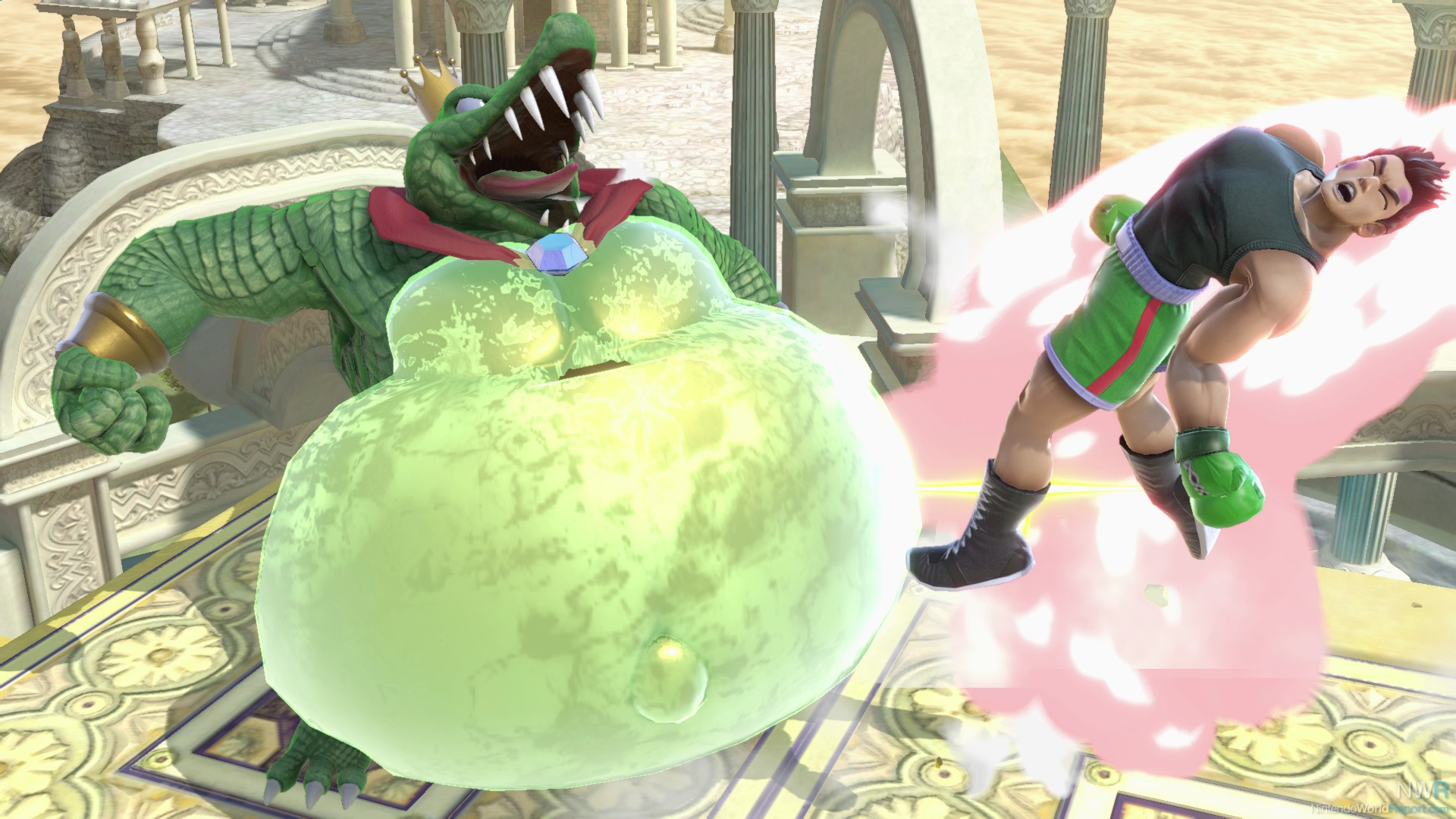 As for the fighters, well, as Nintendo said at E3 2018, everyone is here. Ice Climbers are back after a game off. Young Link returns. Snake’s back. Wolf’s back. The newcomers, while less numerous than other entries, are all fresh and unique. King K. Rool is a personal favorite, as he hits like a truck, has an incredible recovery, and features some solid space-clearing ranged special attacks. I’m also digging Ridley’s grapple-heavy melee style, Isabelle’s trolling tweak on Villager’s loadout, Simon and Richter’s whip-focused Castlevania references, and Incineroar’s swagger and wrestling moves. Lots of the classics have been changed: most notably, Link got a Breath of the Wild facelift, and while he’s now more different than the other two Links, I’m not sure I like playing as him as much anymore.

Ultimate’s single-player showpiece is World of Light, the ambitious adventure mode that starts off with all the characters aside from Kirby being turned into possessed spirits. World of Light takes place over a giant world map where you run around from point to point taking on these enemy Spirits in battle. The map is huge, with hundreds of matches to play, so much so that a full playthrough takes around 30 or 40 hours. The flow is repetitive, as essentially all you do is play these matches and roam around the map. That doesn’t make World of Light bad, just not something that is all too fun to binge. The pace is slow and you can only use characters unlocked in the adventure itself, which can take a very long time. 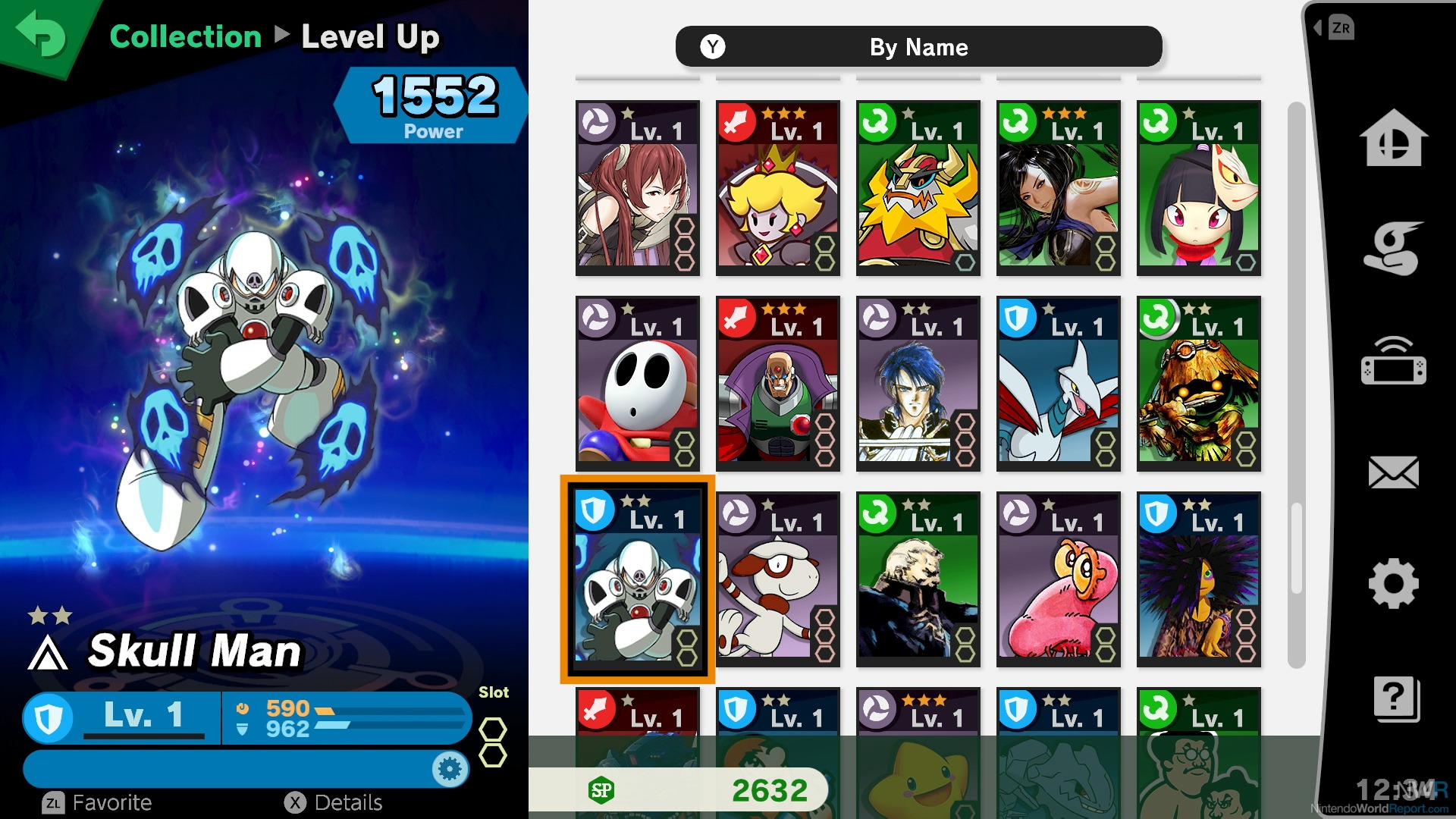 The Spirit matches that make up most of the mode are all novel, featuring a character or item from a game from Nintendo or one of several third parties and a corresponding match that represents and pays homage to the character. The matches are all exceedingly clever with a slew of deep-cut references and nods to games that I didn’t even know existed. As you complete these matches, you add the Spirits to your collection. Spirits help to boost your stats and abilities in World of Light to make matches easier. Sometimes your Spirits will nullify the challenge, like a fight against a Jigglypuff Spirit features slumber-inducing floors that can be cancelled by a Spirit that renders the sleep effect null. Nevertheless, tweaking your Spirits to give you the boost for tackling a tough match is a ton of fun.

Those Spirit matches can also be played outside of the World of Light context in Spirit Board, a quicker mode where you can hop between matches presented essentially as a series of “Wanted” posters. I’ve already gotten sucked into just bouncing between matches. It’s just an enjoyable way to mess around with Smash Bros. That’s what World of Light and Spirits as a whole do—offer up numerous ways to mess around with Smash Bros. The beating heart of the franchise will always be the multiplayer, but the addition of the single-player modes here just provides more options to explore these characters and, in the case of the oodles of Spirits, go on a visual tour through video game history. Unfortunately, it’s only a visual tour, as the Spirits are only represented by a name and a game. In-jokes abound in every match, but unless you’re previously familiar with the character or series, the charm is lost. Not having descriptions a la the trophies in past Smash Bros. games is a huge loss. 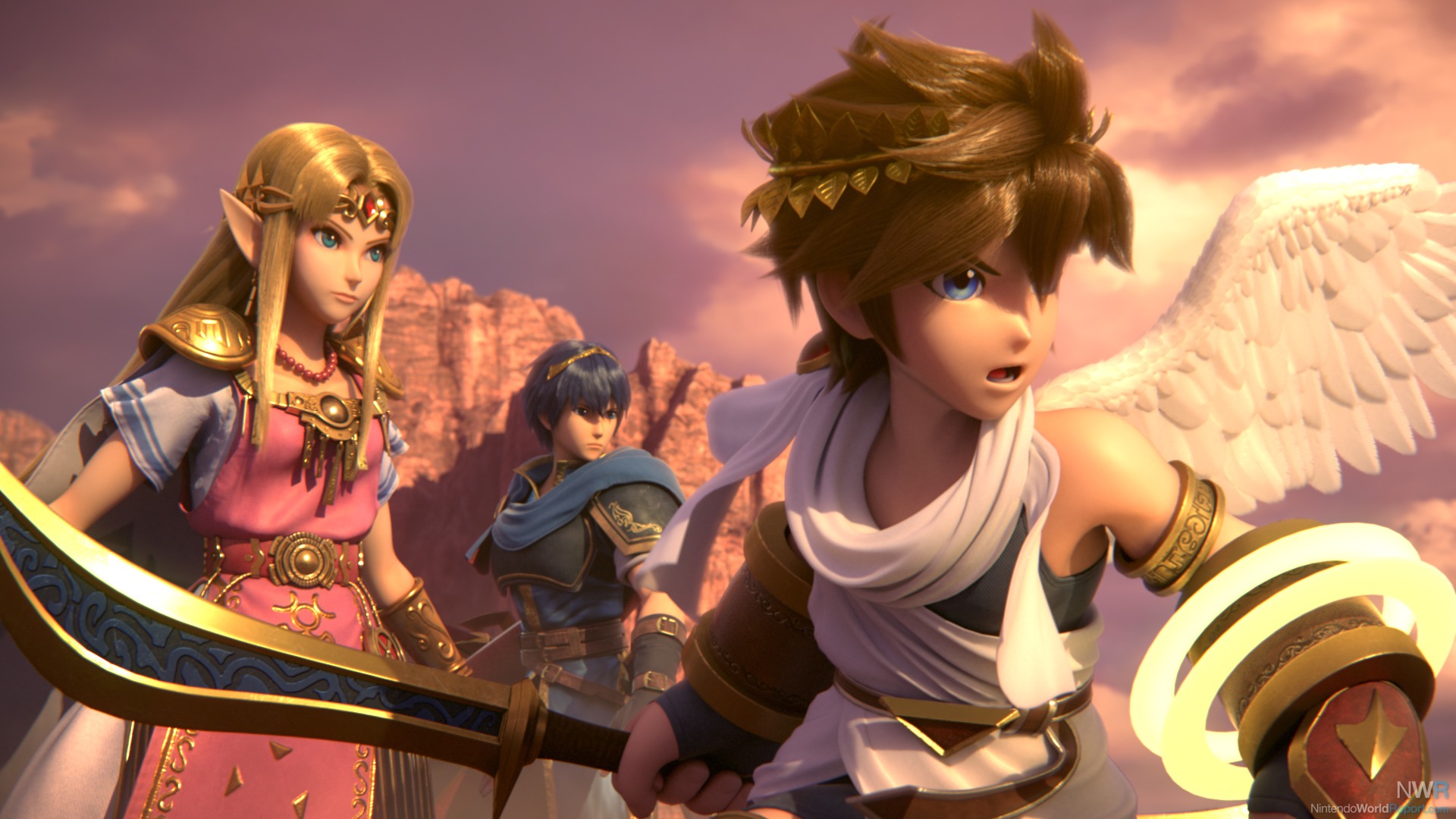 Outside of the multiplayer and big new single-player options, Smash Bros. Ultimate is still inundated with other modes, including the revised Multi-Man mode Mob Smash, a multiplayer Tournament setup, and the novel Squad Strike that lets players pick teams of fighters to square off against each other in a row. Also, Classic Mode returns with specific routes for every character, all with a cute theme and some individuality. However, they all have the same terrible side-scrolling race to the finish level that got so stale over multiple replays that I just started running to the left and dying to finish it as quickly as possible. The bosses that close off Classic Mode are great fun, though, with battles against Rathalos from Monster Hunter and Dracula from Castlevania being highlights. Romping through Classic with every character gets a little old, but once again, when taken as a piece of the pie and not the whole pie, Classic is an excellent option to break up your multiplayer and Spirit-driven experience.

As per usual for the series, the soundtrack for Ultimate is jam-packed with original songs and remixes, though this time the amount of tracks is more than double the Wii U version. You can make your own playlists, listen to the music with the screen off, and even set what music plays on which stage in greater detail. The new additions are excellent, with some absolutely spectacular Breath of the Wild-themed remixes, as well as a wealth of other great jams, including songs based on Code Name: S.T.E.A.M. and Snipperclips. The addition of Castlevania music is awesome, with many killer remixes for that series. Capcom also has a great presence with Mega Man and Street Fighter remixes. Sadly, Square Enix basically added nothing to the game aside from Cloud as a playable character. There are no Final Fantasy remixes and only two songs for the Midgar stage.

Elements of Super Smash Bros. Ultimate are messy, with the online being a major issue, but more often than not, the daunting experience wins out with engrossing combat and a wide variety of characters and modes. World of Light maybe overstays its welcome, but it’s an enjoyable ride through an array of matches. The oodles of extra modes are great alternative ways to mess with the characters and history. But the core of what matters with Smash Bros. is the local multiplayer, and it is still one of the best party games out there, bar none. Ultimate’s inclusion of all the playable characters from the series history—as well as several dynamic new characters—along with most of the stages and music makes it a must-have multiplayer game for the Switch.

In the video, John R's Mii in a Fox costume is disturbing...

I've been on the fence about this one, chiefly because I'm a solitary gamer and have little use for multiplayer affairs. But the single player modes seem real meaty, so I may pick this up at some point after the holidays.

In the video, John R's Mii in a Fox costume is disturbing...

The worst part is that the costume doesn't have pants.

Good review Neal. I always enjoy your thoughtful content. And just because I can't resist being "that guy":

So it's almost as good as Gris?