The World Ends With You: Final Remix (Switch) Review

Given my love for the original version of The World Ends With You, the announcement of the Final Remix version on Switch instantly made it my most anticipated game of 2018. Now that I’ve sat down with the shipping product, I have to report that although the core game is still great, baffling design decisions and promises of content that simply weren’t fulfilled helped make The World Ends With You on Switch one of the more disappointing ports on the system. 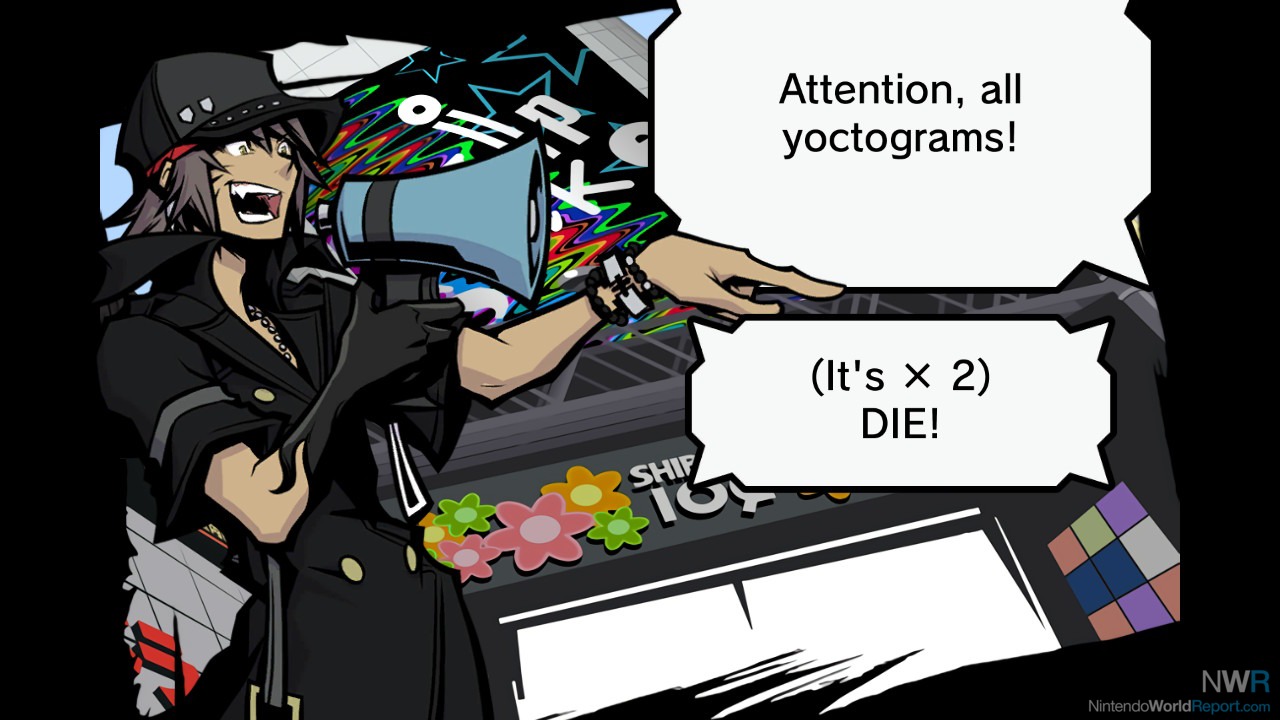 There was some question about how a DS game would look in HD, and the answer is “beautiful.” These are the sharpest the characters have looked, even considering the mobile port that this Switch version is based on. The environments pop, especially when the game is played docked. The remixes of the soundtrack are familiar and enjoyable, but the option to switch back to the original’s soundtrack is available at any time. I hadn’t played the DS game in several years – not since the RFN RetroActive in 2010 – and enjoyed revisiting the events for a while. The added “New Day” section gave some nice new toys to play with, and provided another view into the characters. But there’s a lot missing here.

The biggest difference between reveal and release is in the controls. Originally, it was promised that DS-style pad and touch or motion controls would be present, but the game ships with two control options only: Joy-Con pointer when the game is docked or in tabletop mode, or touchscreen a la the mobile version in handheld mode. If playing in handheld mode, the only buttons that work are the screenshot and home. It took several in-game days before I learned to compensate for the constant drift of the Joy-Cons, as the motions used for combat require constant jamming of the recalibration button (Y or left, depending on which Joy-Con is in use). Handheld mode controls are generally accurate, though some pins (aka combat tools) made me glad my roommate located a capacitive stylus. The button/touch combo normally allows for control of both your main character Neku and his partner of the week simultaneously, with the rhythm of the battles flowing from alternating between the two characters to build a Fusion (super) meter. Unless you’re playing in co-op mode, this is replaced by doing a specific motion to force the partner character in like an assist character in the PlayStation 1 version of a team fighting game. They’re treated like a pin, which diminishes the experience.

The other major loss from the initial announcement was in the new content for this Switch release. The announcement of Final Remix promised “Another 7 Days,” representing how each chapter of the game is a day and Neku has a partner for seven days. What unlocks after beating the game and completing some other requirements is instead called “New Day,” and although it has an interesting take on the characters including some new art, the mode is definitely not what’s advertised. And I did borrow a quote from Neku at the end: “WHAT THE HELL?”

On paper, The World Ends With You would have been perfect for a Switch adaptation, and it still could be. There hasn’t been any indication of post-launch updates to fix the controls, but in a less cynical view we can be glad they’re not selling Another 7 Days as a separate expansion. But Final Remix is something rare: the Switch port of a classic game that would have been better served happening on 3DS if they wanted to replicate the original experience. 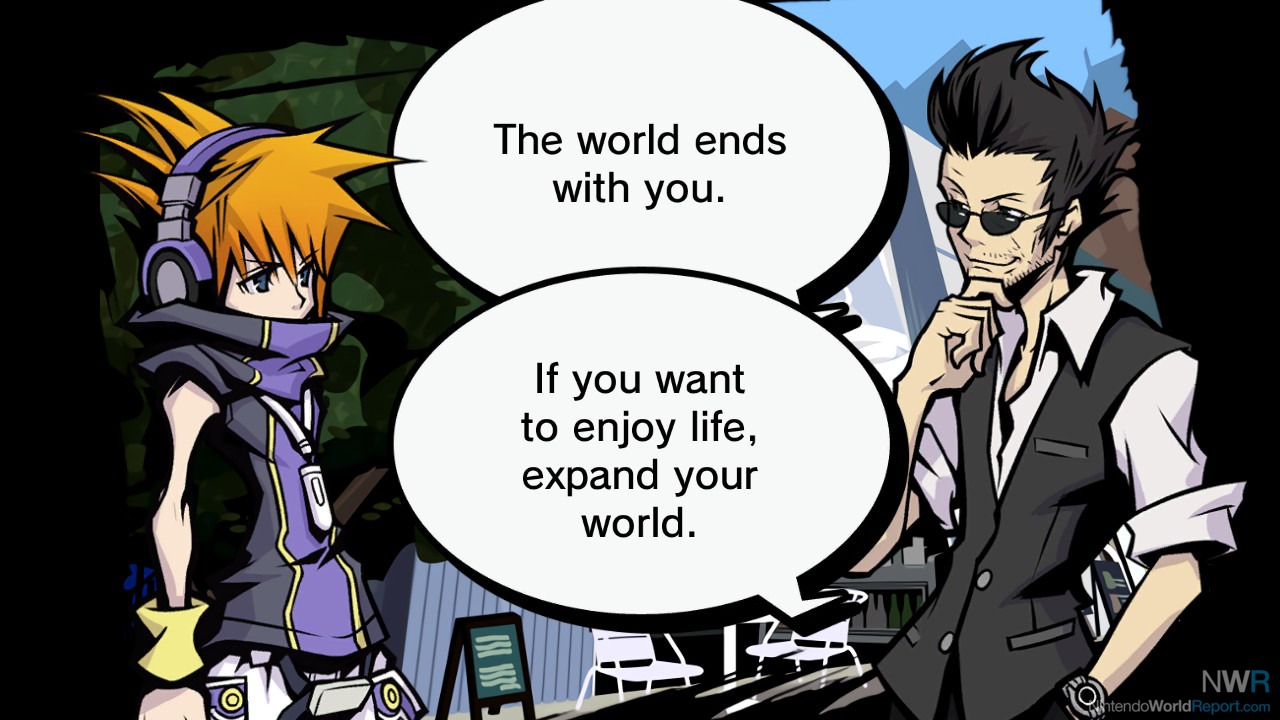 The combo map stuff was shown alongside unfinished new cutscenes and stuff, so it probably didn't work out for whatever reason in early development. That's a fair if not overstated point.

I feel the need to point out that Final Remix never promised the "New 7 Days" to be featured in the game, just a "new scenario", which due to the presence of the Solo Remix Teaser character people assumed it would be New 7 Days or a cutdown version of 2014's scrapped internal sequel. They were very clear during the marketing that the new scenario was "A New Day" when they started promoting the new content, and (avoiding spoilers) that scenario is clearly still intending to lead into "New 7 Days" in a different game. So there was no wrong advertisement, you've likely just forgotton or misheard what was promised over the last ten months.

Also the negative point about a mission requiring a 1% Drop is ridiculous; the player is given complete control over their drop rates and you could have easily made that a 100% guaranteed reward with a little effort. Even without going all out to force it to 100%, you could drop your level by 9 to make the default multiplier at 10, and then killing with a fusion multiplies the drop rate, and it's easy enough to hit 3x or 4x there, so that's an easy 40% up from 1%. Plus you add on the default multiplier for each chain, so fighting two battles back to back raises that to 80% already.

I don't mean to come off as one of those drones who scream about low review scores but reading this I feel like the score was lowered directly due to simple mistakes on the reviewer's part and that's a terrible look.

I don't mean to come off as one of those drones who scream about low review scores but reading this I feel like the score was lowered directly due to simple mistakes on the reviewer's part and that's a terrible look.

Agreed. Shaymin definitely should have given it a 6.5 like the second opinion review on this site does. It's inexcusable that Shaymin took off a .5 from his score because of his failings as a gamer.