The captain is back, but is it worth a second journey through the puzzle boxes?

Three and a half years ago, a puzzle game was released that instantly stole my heart. Captain Toad: Treasure Tracker, which originated from a gameplay style in Super Mario 3D World, proved really enjoyable from start to finish. An incredibly sharp selection of box worlds that needed to be explored to be fully completed. Now the game has made its way to new platforms, and the charm remains mostly there. I do have strong feelings on how you actually play through it, but we’ll get there.

The basics remain untouched. You use the left stick to move Captain Toad throughout the environments. The good Captain can't jump, and therefore can't attack enemies for the most part. Your only means of attack are whatever you can pluck from the ground and throw at your opponents. The goal is to collect the three shiny gems throughout the stage, with a Power Star waiting at the end to finish it off. Once you complete a stage, you will find out that there is an additional goal attached to every level. This goal is needed to fully complete a stage and they range from collecting a certain amount of coins to finding specific secrets. It keeps you coming back to stages again and again, and forms a fun way to keep the player occupied. 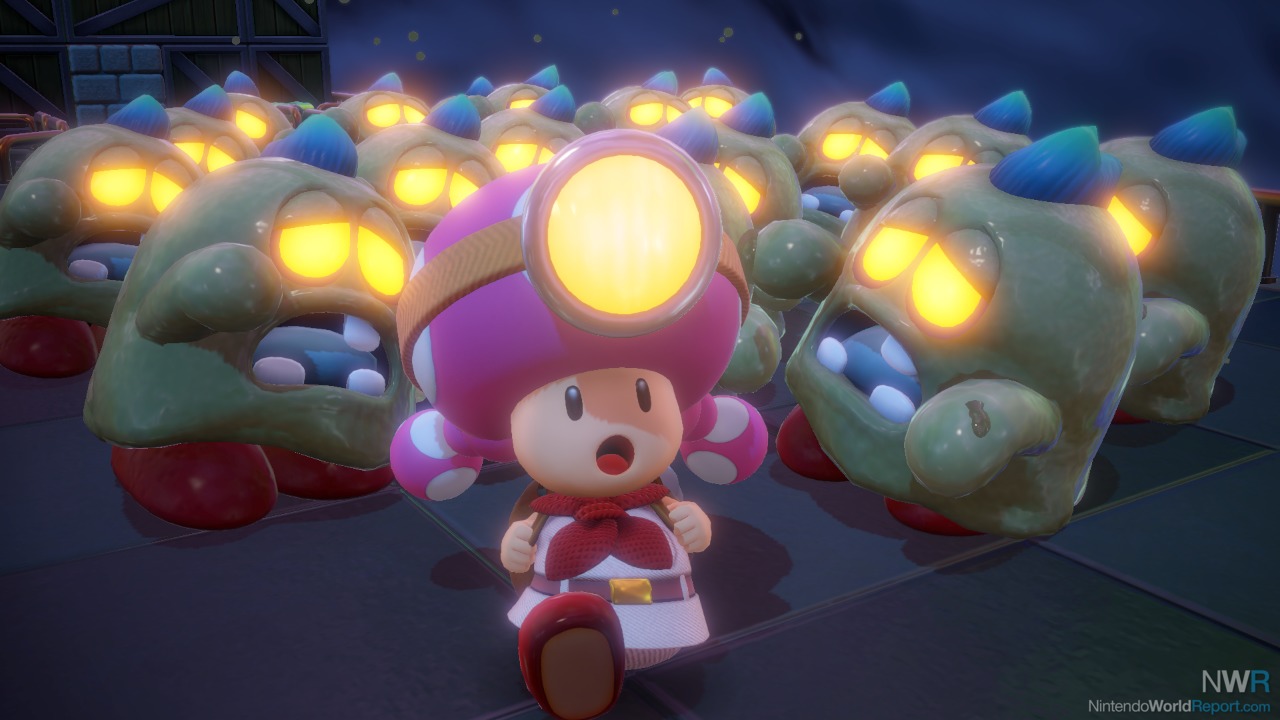 The reason why the puzzler felt so interactive was the integration with the Wii U GamePad's unique features. You had to tap on blocks to move them, touch buttons to unlock passages and spin platforms to make new elements appear. The player had to manage all of this, while keep pushing Captain Toad to the finish line. The title had excellent level concepts and every single one in more than 70 available was thought all the way through. Most of these elements remain present in the new versions with some major changes to make it even more enjoyable. For example, you will no longer blow into the microphone to move platforms around. Instead, these will now move on their own, forcing you to time those specific instances. The camera options offer more zoom capabilities as well, allowing you to get closer to the action. Sadly, even with these changes, the problem of depth perception remains in Captain Toad. Certain levels can be hard to oversee at first glance and require a lot of toying with the camera.

Speaking of performing the best, the two versions of Captain Toad: Treasure Tracker operate in both their unique ways. The Nintendo Switch version is notable as it moves from two screens to one. In television mode, you will use the right Joy-Con or Switch Pro Controller as a pointer to do all of the touchscreen elements. It felt somewhat unwieldy at first, but I got the hang of it after a while. Wheels or anything else that needs a spin can be taken care of with the right stick, which is a solid placement. Personally though, I found the game more fun in handheld mode. The combination of buttons and touchscreen controls is pretty good, and replaces the original experience well enough. The way you hold the system in handheld mode doesn't make every puzzle well suited, but I managed to steer away from too many issues. That being said, the game is joyful to look at no matter the way you play.

On the Nintendo 3DS, you use the top and bottom screens to full effect. The upper screen gives you a nice overview of the level, allowing you to walk around and take in the detail. While doing so, you can enjoy 3D visuals of the box worlds in their full glory. It isn't a big deal in 2018 anymore, but hey, I appreciate that it's there. With the top free from clutter, the touch screen immediately becomes an effective tool. All of the motions you remember from the Wii U game return for this comfy control scheme. It feels good to rest the Nintendo 3DS in one hand, while using the stylus in another. It allowed me to make snappy last minute decisions. 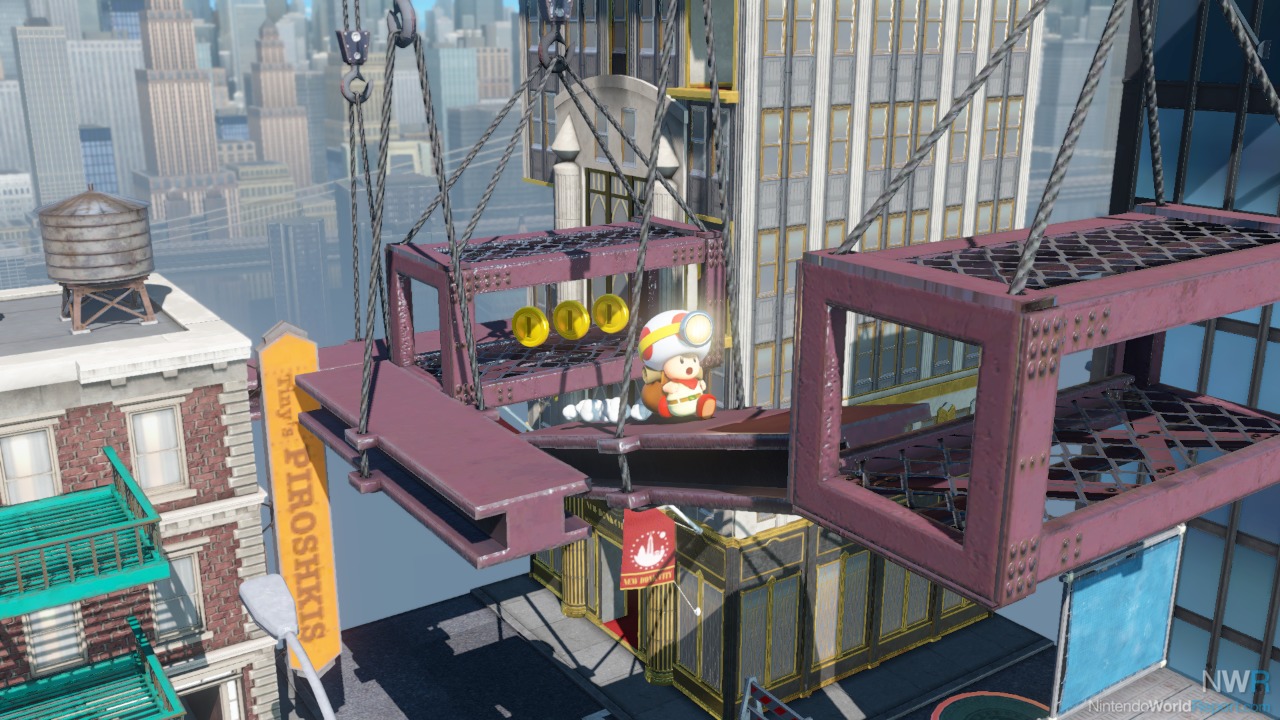 The bigger question, with this being a port, is the following: is it worth playing a second time? The answer is no. Don't get me wrong, this is still a fantastic game that deserves to be played. In fact, if you never played it before, you totally should pick it up. There is a constant variety in these micro universes that will both challenge and delight you. That being said, this isn't the ultimate edition of the game. The four Super Mario 3D World levels, which saw you exploring normal stages as Captain Toad, are replaced with four Super Mario Odyssey kingdoms. For this version, they created four brand new puzzles that can all be seen in seven minutes. Also, for a game that uses 3D World items and elements, it is really weird to see its references just gone. It is neither positive or negative, but that gave me pause.

Outside of that, the hide and seek mode can be played directly after completing a puzzle. Here you will find a Pixel Toad hidden somewhere in the level. You will use the pointer or touchscreen to tell the game you found him. In the original, this feature was stuck behind a Toad Amiibo, which you no longer need. Considering the amount of goals already present, keeping this in felt more like an afterthought. The only thing the Toad Amiibo gives you now is an invisibility mushroom, while others will grant you additional lives or gems. By scanning in the Odyssey Amiibo, you get access to the four new stages present. This is similar to how 3D World save data unlocked those levels instantly before.

Captain Toad: Treasure Tracker remains the fun game it was before, though there is no need to play it twice. Most of the original content is present in this release with the Odyssey content being the exception. The sheer variety of puzzles and fun gameplay mechanics deserve to be experienced at the very least. It doesn't really matter if you do that on Nintendo 3DS or Switch as both run quite excellent. If you’re in the mood for deliberate and engaging puzzle game, Captain Toad will keep you busy for quite some time.

If they re-release the levels they took out I will get this.

If this was only on Switch, I would bother buying/playing it again. But because of the 3DS version, Im sold. I was really impressed by the demo. Its a perfect fit for the 3DS and it looks amazing. Maybe the best looking 3DS game?

Based on the demo MH4U finally has a challenger for the title of most impressive looking 3DS game.