Exploring, trading and interacting your way to a succesful business.

Neo Atlas 1469 is a rather interesting beast. The title is the latest entry in a long running Japanese franchise, which started way back on the SNES. Make no mistake, while it was originally released in 2016, the content isn't exactly new. The game is based on Neo Atlas II which was released in 1999 on the original PlayStation. With graphical improvements and new scenarios, this management simulator tries its darndest to pull you in with its charm. And you know, it succeeded on that front for the most part.

With that said, the opening hour didn't make a great impression on me. You are kind of forced into an hour long tutorial, which features an awful amount of handholding. It sees you completing underwhelming tasks, simply hopping between points and getting a job done. This intro can be sped up somewhat, but I had to finish it in a singular playthrough. You can't save in between, so if you need a break the only way is to put it to sleep and not play anything else. 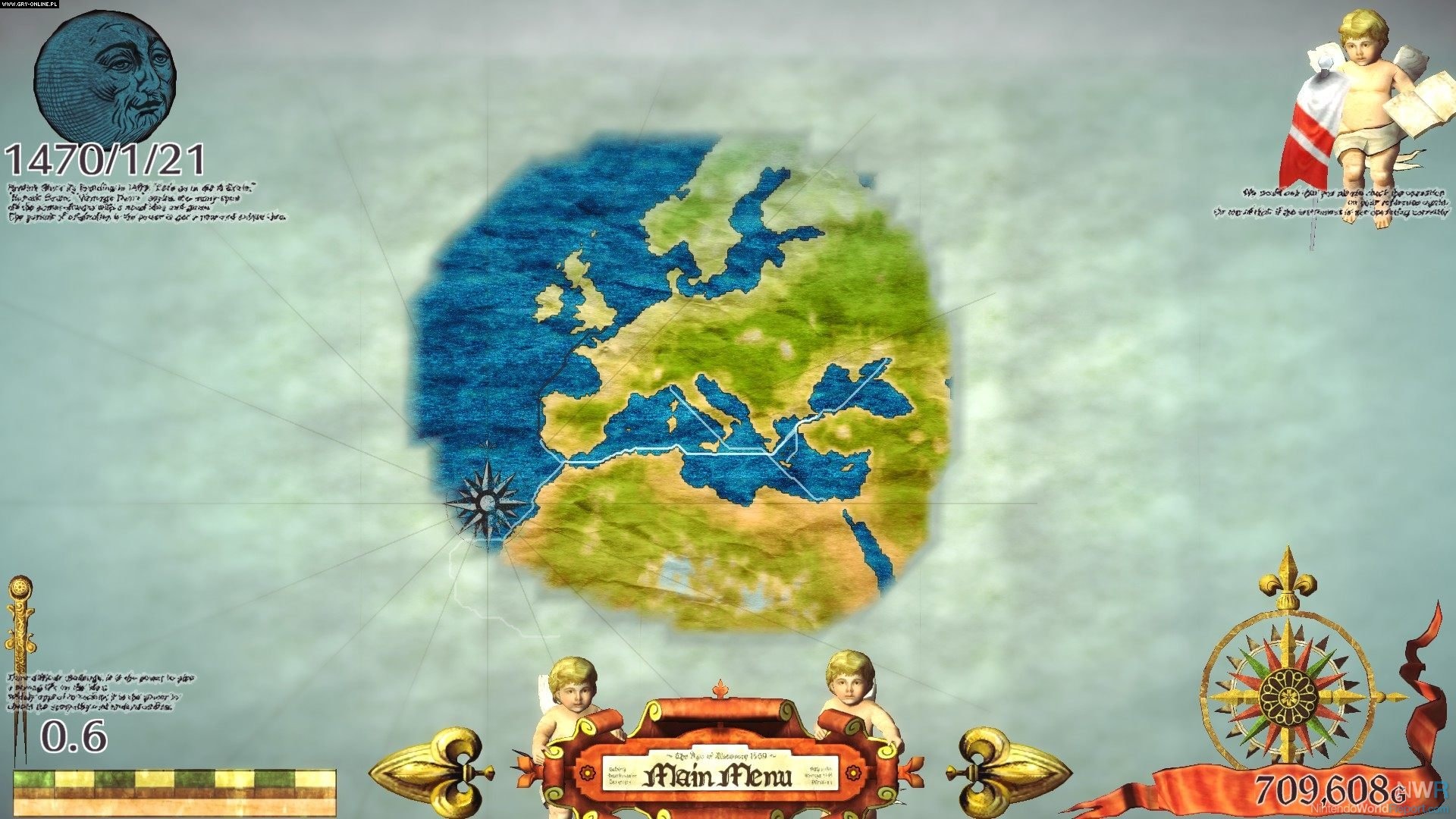 What gave me the will to make it through, and kept my interest rather high, were the characters and their story. Your ultimate goal in the tale is to build your trading company, recruiting new admirals and exploring the world. While the tale is told with still images, the quality of the writing has a weird visual novel feel to it. Together with your crew, and your advisor Miguel, you aim to figure out what the world beyond Europe looks like. It sees you taking on a grand adventure that started engaging me shortly after the tutorial.

With so many gameplay parts coming together to form Neo Atlas 1469, it might seem sporadic from a distance. What I found is that everything served a purpose, even if I didn't enjoy every piece of it. The main thing you will be doing is exploring. Your admirals will stand tall before your fleets, and help your chances and increase funds in different areas. Peres can look into the distance, while Almeida can dive into shipwrecks to find more resources on their trips. As admirals arrive at certain spots, you get a retelling of the journey. What drags down this part of the story are the text boxes that repeat every so often. The admirals will each react differently, but the situation never seems to truly change. The retelling may result in a quest, or something even grander.

It’s here that exploration shows its true colors. You will be asked if you want to approve of a report. This results in unlocking new ports and treasures, cleaning up the map and finding yourself in new situations. Naturally, if you get cold feet, you can ask the fleet to come back and reject a new reality. Early on though, there should be nothing stopping you from taking a risk or two as it give you options. The world will begin to take shape, and new paths will steadily open up for business. You, as the owner, are responsible for keeping costs in mind and ensuring a safe return for the crew involved. This might sway you into making a bad call or two, which is where the challenge lies. The crew might come across pirates, sea monsters or simply get lost in the process. You will simply not know until you decide their fate. 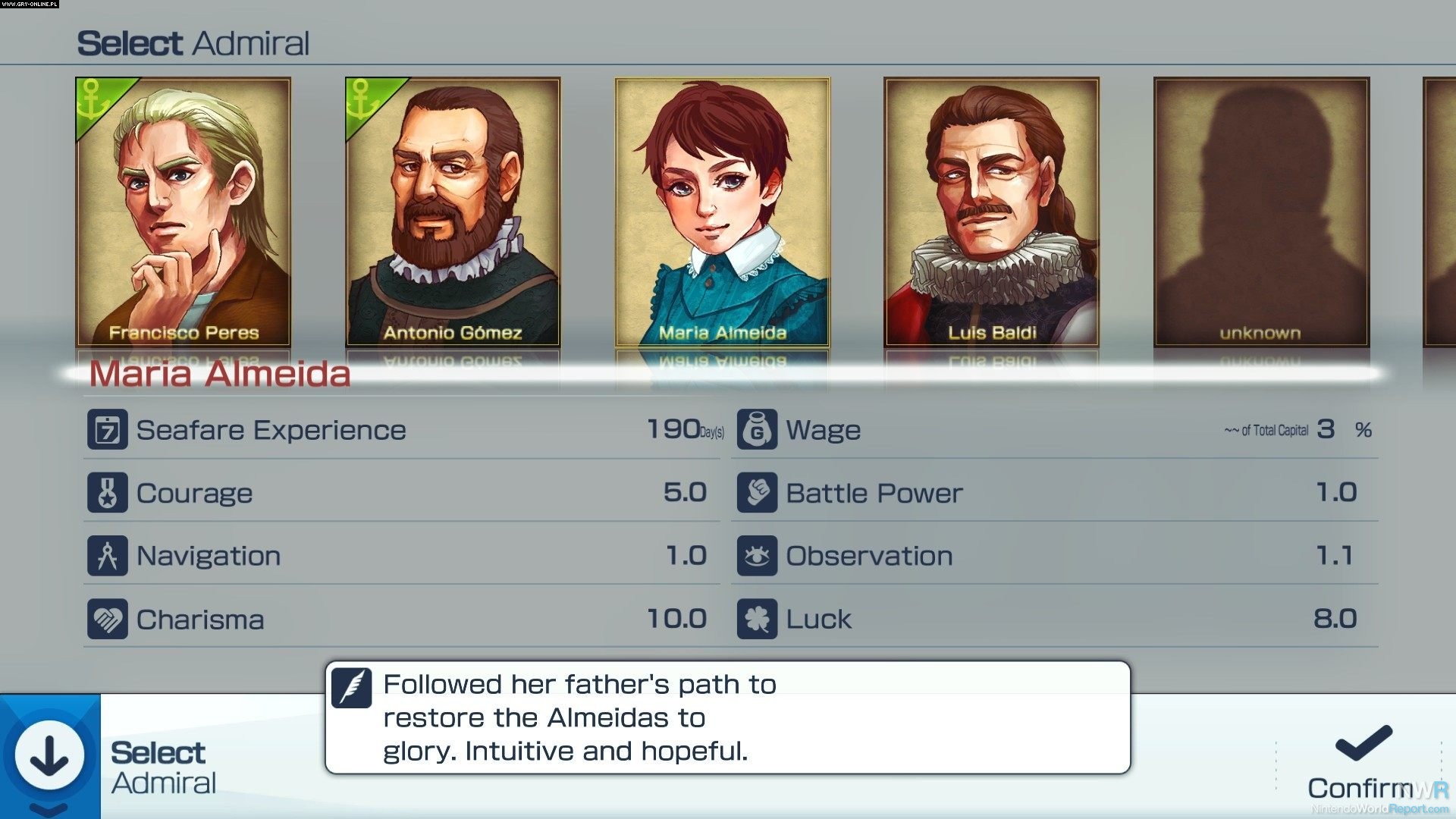 While the explorers are off having fun, you will also need to build up your trading routes and ensure that the business continues to thrive. While you get money from the King of Portugal, it’s better to see this as the wage for your admirals. A thriving business is one that has mastered exchanging items, or creating attractive products that ports on the route need. A good example is how you can exchange mirrors for expensive rubies, which can in turn be changed into rings. You’ll need to track and monitor both the influx and outflux of goods, and I had a lot of fun relishing in the numbers. Ultimately, trading comes down to combining two products and making something that is worth selling. That money will be used to create new fleets, making the needed repairs and help your crew reach new heights.

The gameplay that I enjoyed the least was the treasure hunting. You will find yourself constantly zooming in and out on the map to find new and exciting objects. They are a necessary evil, needed to activate quests and keeping the money incoming. The side quests, which come as a result of this labor, are entertaining in all their silliness. While not every single one was engaging, it created the needed levity in the quest of capitalism. Completing more of the world will also complete the tasks of the various admirals, which each come with their slew of aspirations to achieve.

Neo Atlas 1469 has a lot of game to get through. After spending 30 hours with it, I still didn't manage to see everything that the game has to offer. That’s not because I didn’t want to, but the amount of repetition in certain spots can be harsh. After a while, you can recognize situations or know what they ask of you without thinking. You will fight these pirates, make the required trades or complete a quest line to bring in new funds. At the same time, there is something relaxing about putting it on for an hour and getting a job done. The controls make it easy to pick it up and play, particularly in handheld mode since you have the ability to use the touchscreen. The presentation isn't anything mind blowing, but with a clean UI, you know what you're getting yourself into.

Neo Atlas 1469 is an unique oddity on the Nintendo Switch. While many of the key components wouldn't play well separately, the package itself is hard to overlook. I found myself constantly in good spirits exploring new routes, accepting or rejecting reports and cleaning up quests quickly. While some elements are keen to repeat a bit too much, there was something calming about every go I had. From what I could tell, each playthrough can be completely different and this will likely keep me coming back for more later down the line.

Replying to suggest that the game's dialogue be moved from the pro column to the negative column. I found it excruciating and wanted every character to die.