The game that makes every other Star Fox game even better.

Before we begin it’s necessary to address a few issues that crop up when reviewing a title that is being released just over two decades after its intended launch date. When I review a game I have two goals. First, I believe a review must be fair to the reader. Presumably, you read a review to determine whether or not to spend your money on a game. Ergo you expect honesty in criticism and not simply praise. Secondly, I believe a review must be fair to the game itself. I feel games ought to be judged based on what they are. I don’t believe in holding a game accountable to pre-conceptions but rather I feel it ought to be judged based on nothing other than itself. Under any normal circumstance these two standards offer no conflict with each other. Being honest about a game is also inherently honest to the reader. That is until you find yourself reviewing a game that should have been published in 1996 rather than 2017. To hold Star Fox 2 to the technical standards of today would not be fair to the game, but to pretend I’m writing from the perspective of 1996 would be dishonest to the reader. After pondering this problem for a few days I came to the following conclusion. Honesty towards both the game and the modern reader in this case is not completely possible. I can only represent my personal feelings on the game and hope that the reader recognizes them as such. With that being said, let’s begin.

If I were to sum up Star Fox 2 in a single word, it would be ambition. Ambition that represents genius level game design and programming. Ambition that pushes the Super Nintendo farther than it should have ever been possible to go. Ambition that ultimately caused the game’s cancellation as, quite frankly, it devalued the power of the Super Nintendo’s successor, the Nintendo 64. Ambition that somehow allowed an unreleased game to endure with fans for over twenty years until it finally released. It is impossible to ignore the legacy that Star Fox 2 forged over the course of its two decades in hibernation. But now it’s here. Now we can see the final product. Of course, the question must be asked, was Star Fox 2 worth waiting twenty-one years for? 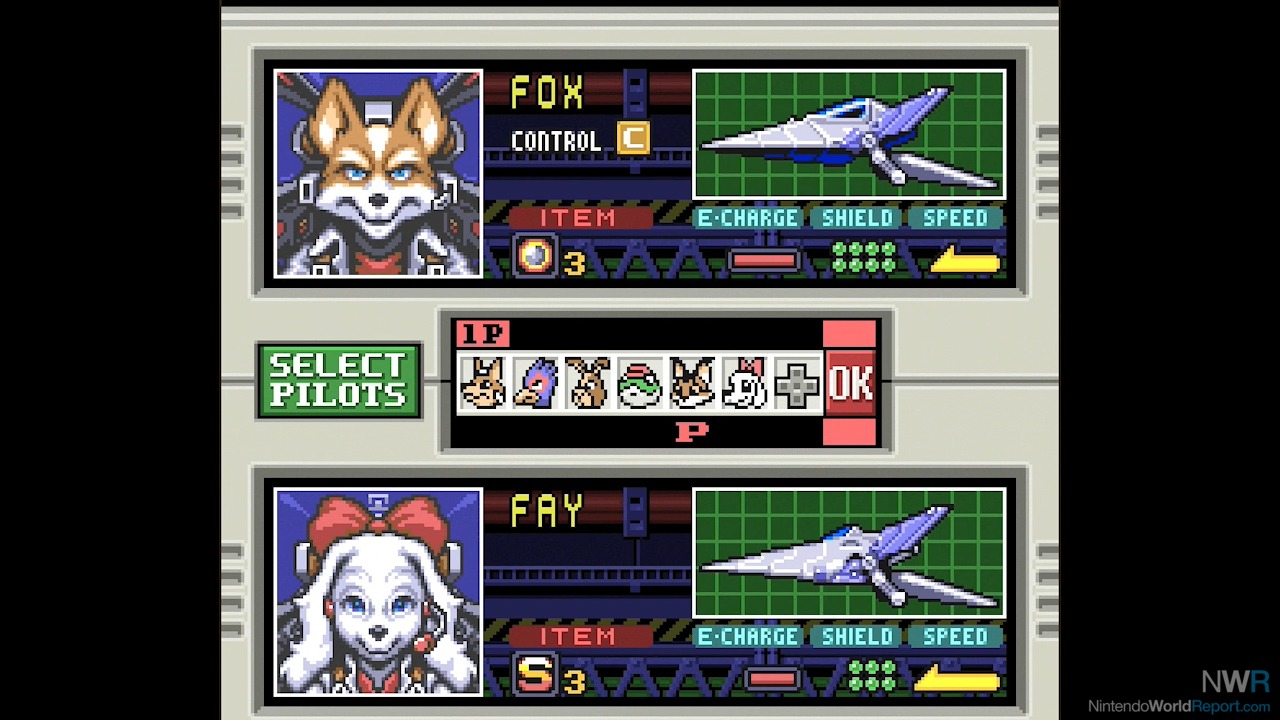 The first Star Fox operated on a simple premise, fly forward and shoot enemies as they fly at you. Star Fox 2 ditches almost all of the original game’s core design. It is ultimately a strategy game in which you take control of two different characters, each with their own Arwing fighter, and freely explore 3D space. Upon starting the game on one of two difficulties, with a third unlockable later, you’ll be greeted with a map screen that looks quite similar to those seen in Star Fox Command, sans any sort of fog. Depending on the difficulty chosen a different scenario will begin playing out. Some amount of heavy cruisers, missiles, fighter squadrons, and bosses will appear across the map, along with indications of enemy occupied planets. These enemy types while generally placed according to difficulty will vary randomly in type, forcing you to adjust how you play each time. You can guide your ships by selecting any spot on the map. Once your ships start moving, so do the enemies. Unlike Star Fox Command, it is possible to change the course of your ship at any time. Upon coming into contact with an enemy unit or enemy-occupied planet the game will change to a 3D view similar to the original Star Fox. Unlike the original however you are now free to fly in any direction. 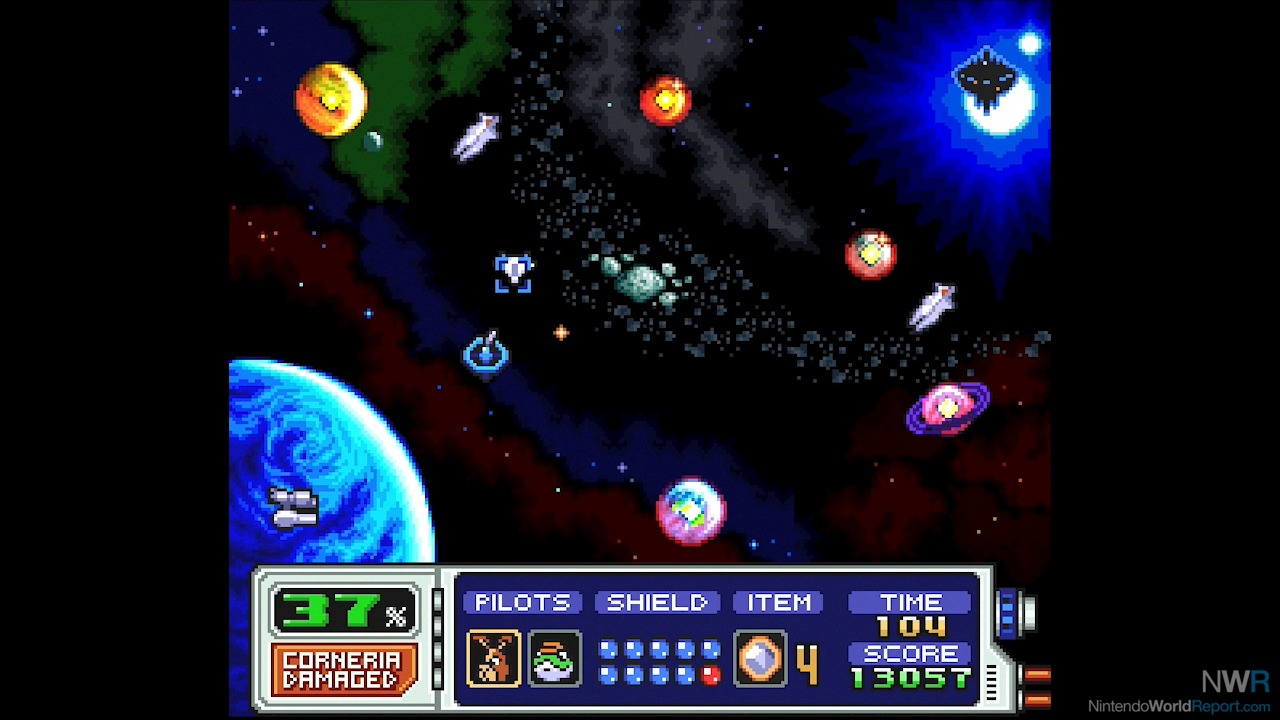 Enemies behave with a surprising degree of intelligence, often trying to escape when the majority of their squadron has been destroyed, forcing you to return to the map and waste more time chasing them down. Certain boss types can even escape and recover health if you fail to keep up with them. These hectic deep space encounters do now and then highlight the technical limitations of the Super Nintendo. At times when dealing with a large number of enemies, the frame rate will drop low enough that I have trouble keeping my bearings. Having a few enemies escape from you can be frustrating when you’re struggling just to keep track of them at just a few frames per second. Luckily these encounters are not the bulk of the game. Taking down heavy cruisers and destroying enemy bases is where Star Fox 2 truly shines. Cruisers and bases spawn squadrons and missiles respectively, so taking them out is key to gaining control of the Lylat system. The longer they sit, the worse off Corneria will be.

The cruisers, or Cannon Betrayers if we want to dig deep into that sweet Star Fox lore, feature the closest thing to traditional Star Fox gameplay one will find in Star Fox 2. These segments open with a daring, linear run towards the cruiser as you take out incoming fighters, dodge anti-aircraft fire, and debris, and finally, land inside the cruiser. It should be noted for those familiar with the leaked Star Fox 2 beta build, that these flight segments sometimes seem shorter in the final version of the game. It appears that your ship moves at a higher speed in these segments compared to the demo. Once inside the action slows down somewhat, and we get to appreciate some of the most unique aspects of the game. Here we have our first opportunity to transform our Arwing of choice into a walker as we explore the elaborate halls of the ship. From here the game plays like a fully 3D, third-person shooter/Zelda game/light platformer. What’s most alarming is how well Star Fox 2 manages to pull all of these things off. The D-pad allows you to control forward and backward movement along with side-stepping. The L and R buttons are used to rotate left and right. It may seem odd at first, but the fact that you’re controlling a transforming mech make these tank-like controls feel surprisingly natural. In Walker Mode, you’ll defeat enemies, perform minor platforming, and press switches to open doors until you arrive at the ship's core. Defeat the core and the cruiser is destroyed just as your Arwing flies out of it. It should also be highlighted that all of this, from distant approach in space to facing off with the enemy core is done seamlessly with no apparent loading. 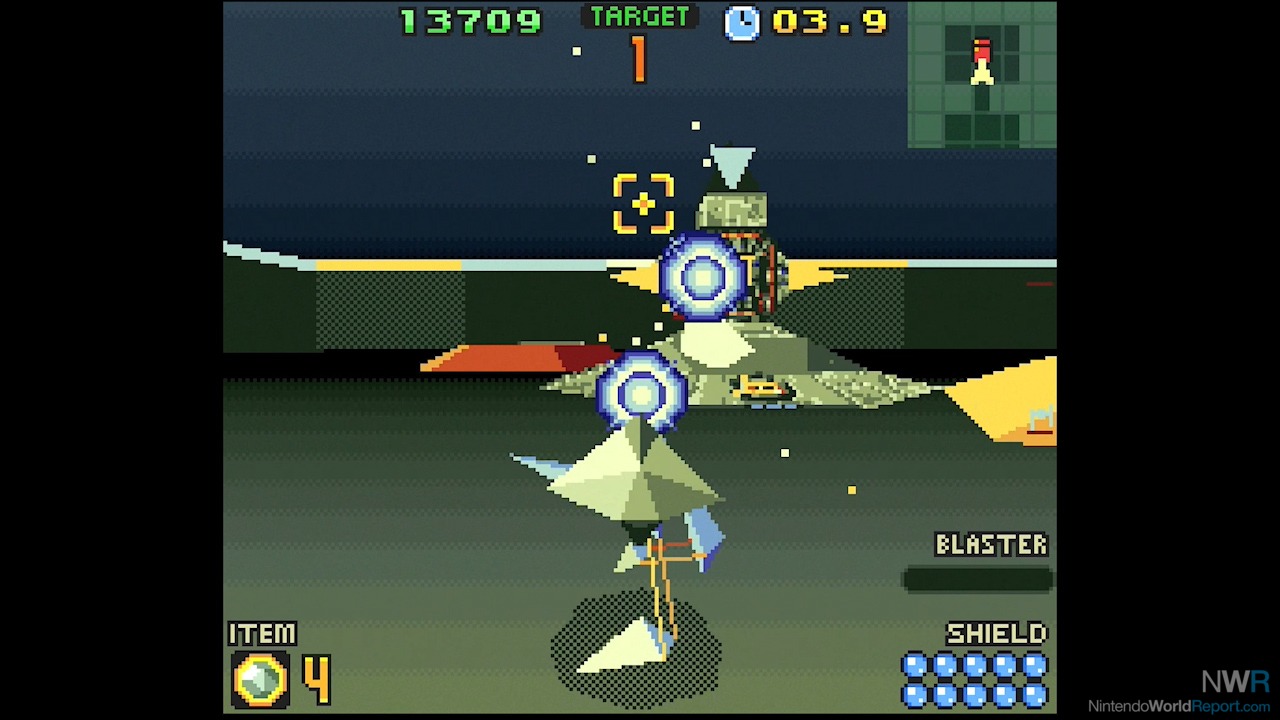 The planetary bases play out in much the same way. You fly down to the surface of a planet where you can explore freely as either a walker or an aircraft. Once on the ground, you’ll need to gain access to the planet's hidden base. The manner in which you’ll uncover the entrance to this base is different for every planet. You may have to dive underwater and fight a giant squid, you may have to solve puzzles, or perhaps you’ll have to deftly navigate platforms suspended over lava. You may even find when you arrive on a planet, that there is a missile under construction on a launch pad. Once you destroy this missile, even if you return to the map screen rather than destroying the base, the missile won’t launch from the planet and that base will have to start over constructing a new one. There is an incredible level of world consistency in place in Star Fox 2 that’s difficult to overstate, even in modern terms. Once inside the base, the level plays out similarly to the cruisers. The complexity of these interior environments scales with the difficulty selected at the beginning of the game. When playing on Expert, the areas near the end of the game truly feel like some sort of proto-3D Zelda game.

All of these actions must be weighed carefully as time is a constant factor in Star Fox 2. No matter what you’re doing, every unit is constantly in play on the world map. This gives the game a constant feeling of tension comparable with the best real-time strategy games. You’ll find yourself taking note of which enemy types give you the most trouble, praying that you’ll have time to take out a missile before that cruiser powers up to fire on Corneria, and hoping against hope that Andross won’t send two incredibly hard bosses after you at the same time.

Star Fox 2 is a thrilling game, whose vast amount of content, strategy, and random elements make it one of the most replayable games I’ve ever seen. It’s only real downsides lie not in its design, but in the unavoidable limitations of its time. Though it took until now, we can clearly see its influence in every subsequent release in the Star Fox series. All range mode would become a staple of the series starting with Star Fox 64. Fox exploring Zelda style dungeons returned when he became the main character of Rare’s Dinosaur Planet in Star Fox Adventures. Target hunting ground and air missions make up a huge part of Star Fox Assault. Strategic combat is at the core of Star Fox Command. Finally, the transforming Arwing allowed Fox to reach new places is Star Fox Zero. Star Fox 2 is arguably the most important game in the entire Star Fox series, and if you ask me, one of the greatest Super Nintendo games ever made.

Im not a fan of Star Fox at all, but I would say Star Fox 2 is actually good. I never really liked the first game much.

2 is a huge improvement over 1 in gameplay, it looks a bit better too.