A game that digs right to the center of your heart.

SteamWorld Dig remains one of my favorite Nintendo 3DS eShop games to date. The sheer amount of times I've played that title is staggering and every run I would find something new. While the pacing is slow at first, its gameplay quirks kept me hooked every single time. Their follow-up, SteamWorld Heist, saw similar success and partaking in a new genre. While the desire for upgrade systems was strong, it couldn't de denied that it was a quality product once more. What would happen if the problems from their previous games, helped to shape their greatest game yet? This is SteamWorld Dig 2.

From the outset, the differences between the original and Dig 2 are clear. The larger focus on narrative sees you stepping into the shoes of Dorothy. She left her humble home of Tumbleton for a trip to El Machino. Rusty, Dig's protagonist, disappeared after the events of the first game and Dot is really unsure why. He was considered a hero, so why would he have a reason to leave? The search for answers sees her delving deep into the earth below and is rather stacked with twists. The story beats are woven with a great set of characters. Dot and her pixelated Fen have a great dynamic, but the true quirkiness comes from El Machino. It is much more lively than Tumbleton, which sparks confidence. 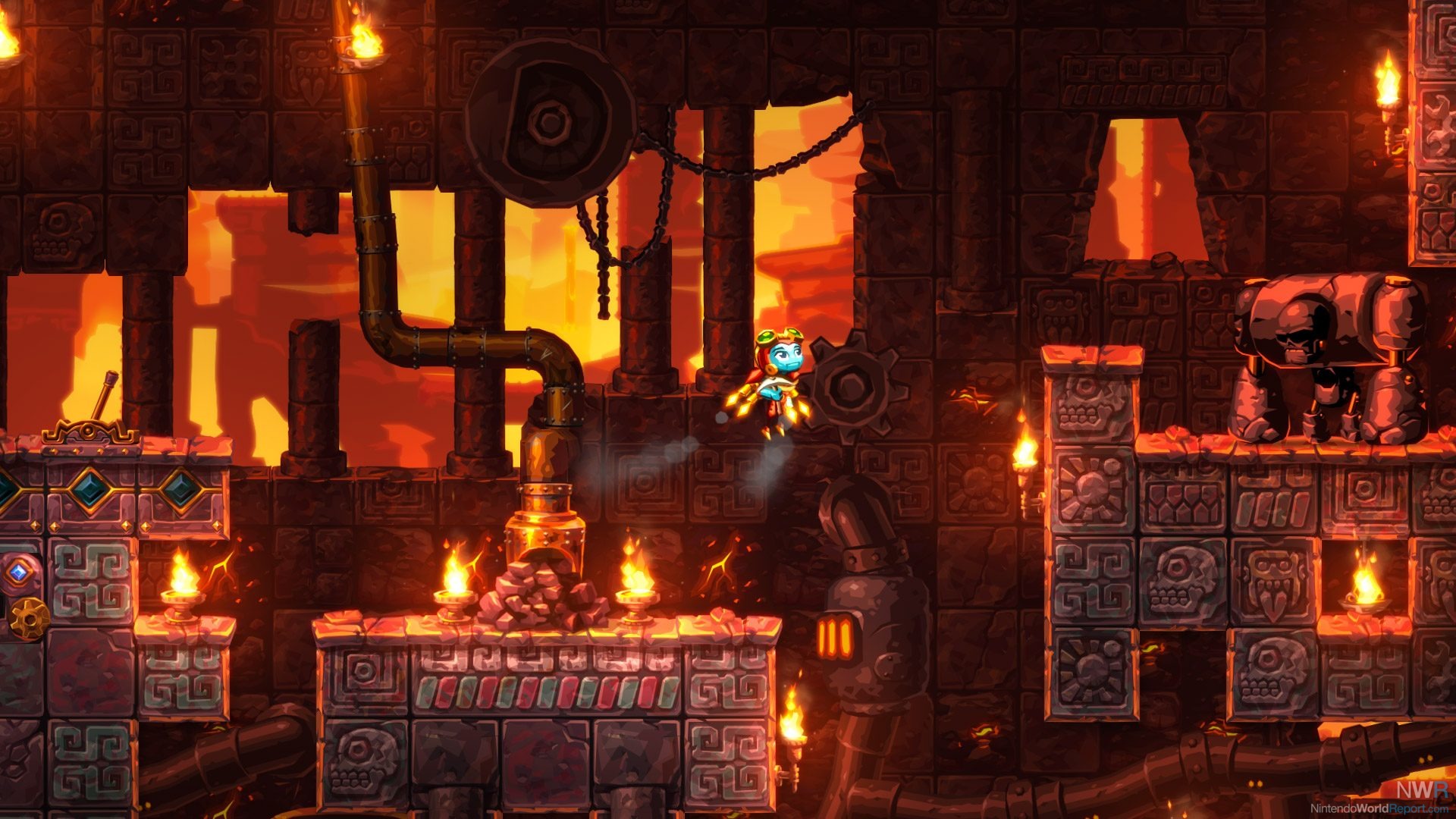 An actual team of level designers crafted SteamWorld Dig 2, where the first game was procedurally generated. You will absolutely feel this once you start progressing. There is a wide map with various locals to uncover, which even includes above ground sections for good measure. Next to this, there is not a chance that you will get stuck. I went out of my way to do this with a collectible, but the game was one step ahead of me. There were blocks that could be dropped from above to ensure reaching said collectible was possible.

Next to exploring the Overworld, the amount of caves that you will enter has been dramatically increased. Each of them has unique challenges that you put your skills to the test. You might have to position mine carts on switches, hang on walls with the hookshot or blow up your surroundings a certain way. If that isn't enough, each hole you enter has a set of collectibles that can help on your quest. This forces you to return to the caves now and again as not every single thing can be found on your first attempt.

Speaking of those collectibles, there are quite significant as well. Similarly to the last game, you will unlock new functions for Dorothy. They are, however, more impactful in how the game is played. The Pressure Bomb allows you to shoot projectiles at walls or object, so that you can create a path every given way. Even bigger is the inclusion of the Jet Engine, with which you can fly high for a limited time. This becomes a pretty significant tool in the latter half of the game, but the same can be said about many things in arsenal. The whole dynamic of the game is changed and it is pretty spectacular to see it unfold. 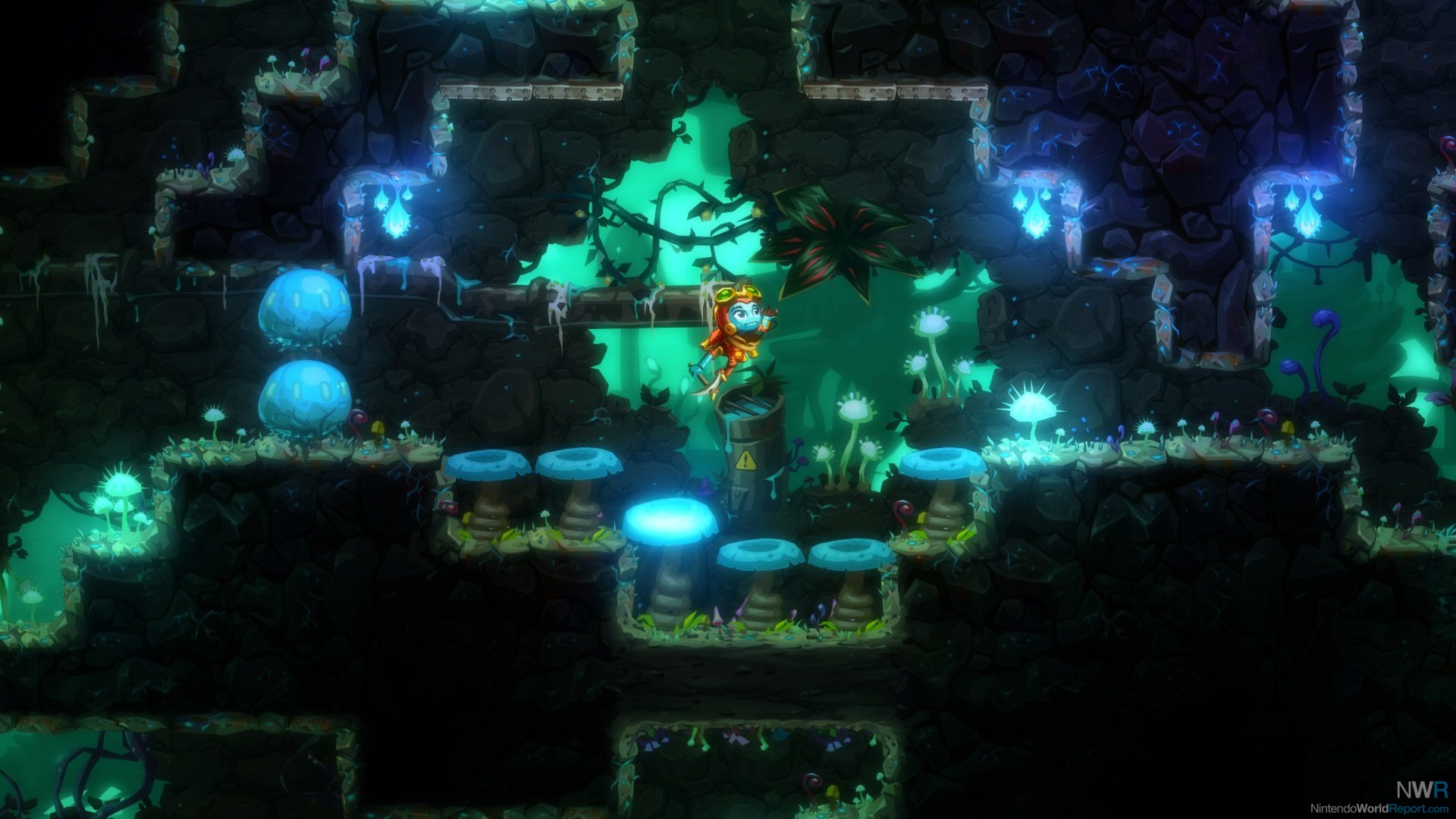 Better yet is how your abilities won't stay at a base level. Veterans of the original will be quick to point out that you could purchase better equipment previously. While that is part of the charm, it goes a lot further than this. SteamWorld Dig 2 comes with a pretty expansive skill tree that unlocks as you level up (defeating enemies) and complete other tasks. These skills require you to find Gears. There are 100 of these spread across the world and some can be quite tricky to find. Is it worth that hassle? Absolutely. You will be able to evade better, reduce fall speed with a jet pack, or get an instant portal back to El Machino.

To grasp that last point by the horns, SteamWorld Dig 2's progression is fast and fun. The wider landscapes are filled with steam pipes that can transport you from point A to B. This minimizes the need and frustration of backtracking to the surface world. In the 11 hours (53% of secrets found) that I managed to get in, there was no dull moment to be found. Players that are less confident in their skills should be happy with the fact that the game saves frequently. In death, you only lose a little of your minerals, but aren't bumped all the way back. They are super friendly with caves in particular as you start back at the beginning of them.

The visual presentation of SteamWorld Dig 2 is on point too. It takes lessons from Heist's book and gives us a ton of variety. The fair amount of detail in the backgrounds and foregrounds is beautiful to look at, regardless of whether you’re planning to play it on the television or on the go. Every steambot and character is also lovingly designed in a way that outclasses the original in every given way. The soundtrack is the best of the SteamWorld series. While I enjoyed tunes in Dig and Heist, Dig 2 introduces the artist known as El Huervo. Best known for his work on the Hotline Miami games, he brings a new flair that I just adore. The town theme for El Machino is one word, powerful.

Dig 2 isn't just another SteamWorld game, but the best one in the series so far. It blows the original out of the water with such ease that it seems almost simple. The biggest improvement isn't that its more Metroidvania-esque, but that Image & Form succeeded in building a world. After four SteamWorld games, everything seems to hit its stride and falls into place on a grander scale. That future excites me, like a lot. A structured and bigger Dig isn't something I knew I needed, but I'm already ready for my second run. I am left that speechless

It is a very very good game, The Steamworld Dig series is perhaps the most polished indie game series I have ever played. They have built on the first one for this sequel and I am hooked!

There are four Steamworld games? I thought this was the third. Dig 1, Dig 2, Heist, what's the fourth?

There are four Steamworld games? I thought this was the third. Dig 1, Dig 2, Heist, what's the fourth?

The first entry was SteamWorld Tower Defense on DSiWare.

Is that still purchase-able or is it lost to time?

I would imagine it's still available on the 3DS eShop. I know some DSiWare's been pulled, but that seems like it's mostly been due to developers folding or licenses expiring.