Crazy strategy and the Switch are a match made in Item World.

The arrival of Disgaea 5 Complete on the Switch is remarkable. Outside of a port on the Nintendo DS, the series has largely avoided Nintendo systems. That being said, it was one of the titles I was excited to see back in January. As I'm a fan of strategy games, I thought that it would be fun to take it anywhere. It turns out that I was right in thinking that. The beefy game delivers hours upon hours of fun characters, beautiful visual flair and one of the most accessible games in the series. I downloaded the game day one on the Japanese launch and didn't regret a single bit.

Disgaea 5 Complete tells the story of Killa. This lonesome warrior goes forth to battle against the tyrannical emperor Void Dark, who is trying to take over every Netherworld and simply make the universe his own playground. Next to this, the citizens of these worlds will be conscripted into his army to ensure Void Dark's protection. Killia won't let that happen and goes on an intergalactic journey for revenge. While all of that sounds great, the problem here is Killia himself. You never hear any emotion from him, something that should surprise you when compared to other Disgaea entries. The leading roles were usually filled by larger than life characters, which gave them a unique edge. Naturally you don't have to scream from the top of your lungs, but a bit more vision would've been nice. 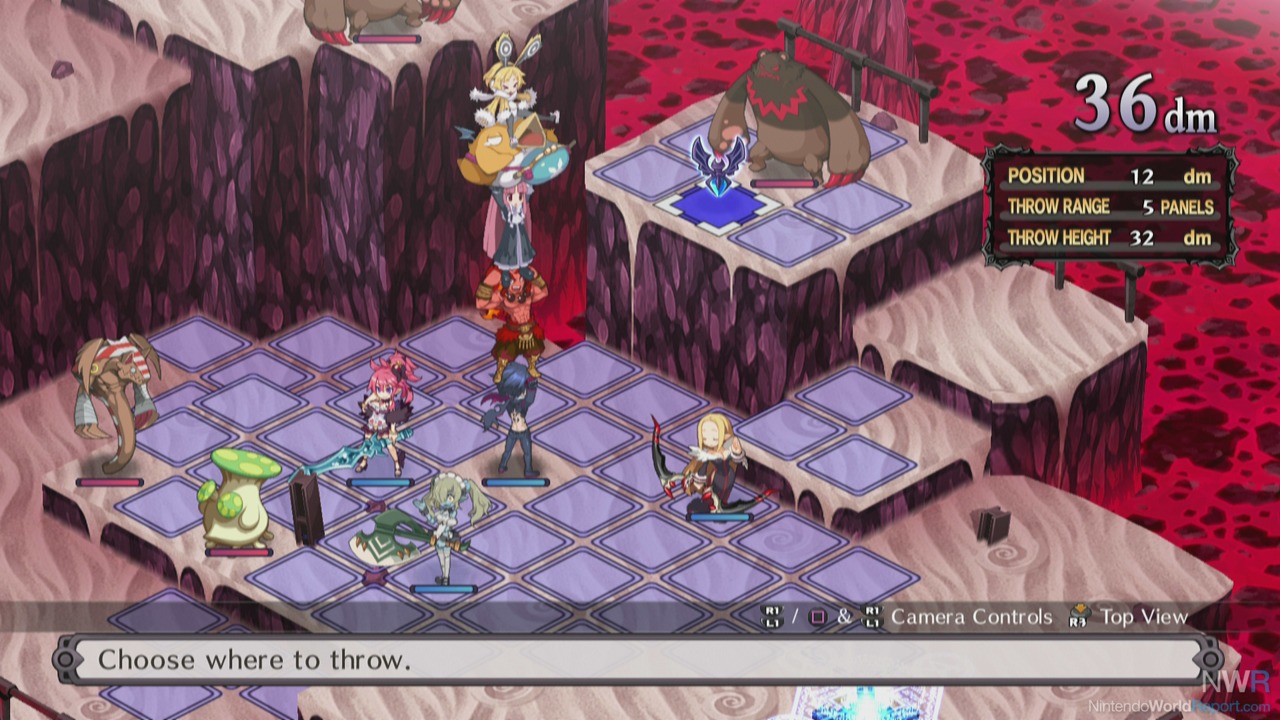 Despite the somewhat laconic hero, the story is still entertaining. During your journey, you will come in contact with five rather eccentric Overlords. These characters have the same goal as Killia, which is why they will end up sticking around, but have their own reasons to seek revenge. The first additional party member is Seraphina, who is the Princess Overlord of the Gorgeous Netherworld. Her parents wanted Seraphine to get married to Void Dark, but she would rather dispose of him. At the start, you’ll find that she really isn't a fighter as she was spoiled during her upbringing. She is egotistical, sees everyone as her servants and almost never takes no for an answer. Along the way, I got a full understanding of these characters and really appreciated most of them. My favorite by far is Red Magnus, who tries to show compassion for others, but ends up destroying everything in his path. What makes these characters so perfect are their voice acting and the quality of the script. Most of the dialogue is presented with stilted art and voices, so they had to be good to succeed.

The gameplay of Disgaea 5 can be best compared to games like Final Fantasy Tactics and Fire Emblem. You put units on the playing field, move them across a grid and choose the action that will severely damage your opponent. Unlike most strategy RPGs which encourage taking your time and planning, Disgaea demands quick kills. The best thing to do is to choose a target, lock them in a corner and unleash some of the craziest combos ever. The enemies will be trying the same thing, so why not use it to your advantage? While it is slightly sad that battles feel more like a tug of war, it does let you enjoy the full array of systems on offer.

A good example of that is the Revenge system, which reduces skill cost to a single point and lets you ratchet up the damage when at lower health. Every Overlord character also has their own special attacks, which charge and fire quickly. Seraphina can charm all male characters near her, rendering them unable to attack or move for multiple rounds. Next to all of that, the fifth game in the Disgaea series has made major strides in making it a more pleasant experience. The class system has been cleaned upmaking it far easier to reach advanced classes. If rollinga new unit, you can pay a one time fee to let it grow instantly to Killia's level. It ensures that grinding is a lesser part of the experience. 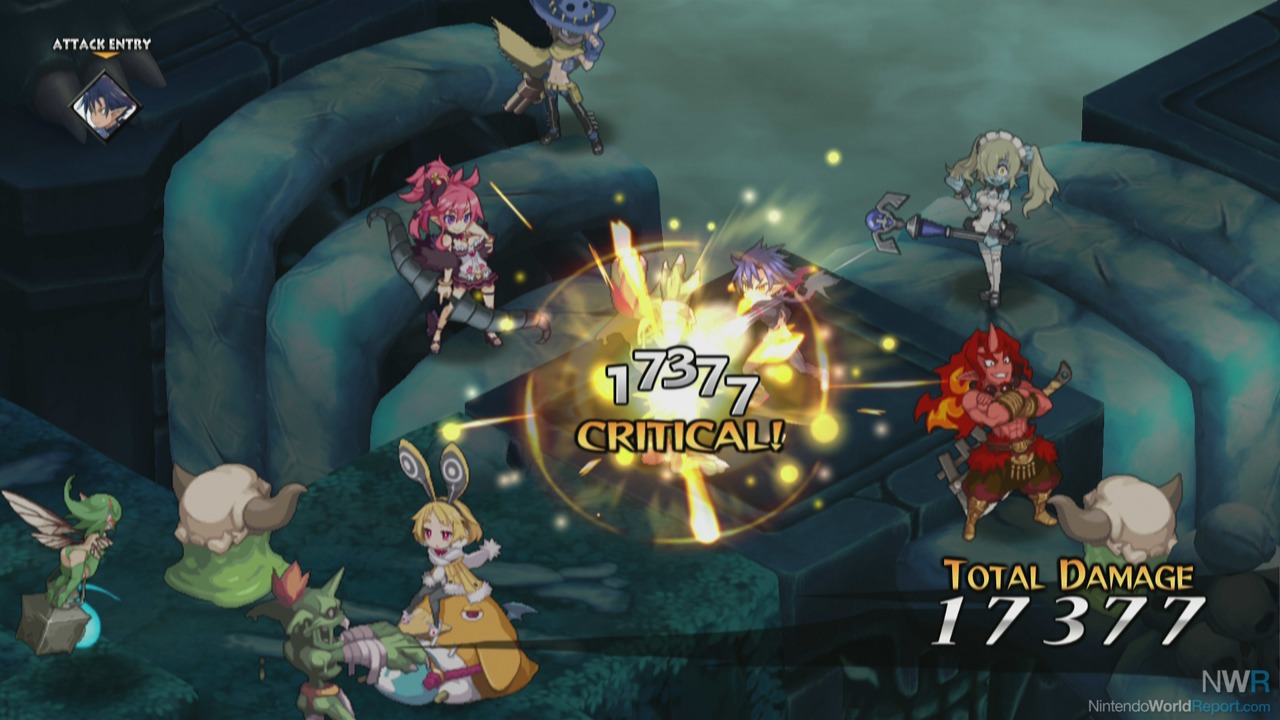 Disgaea games still require a grind however, especially since the difficulty spikes just after the halfway point of the story. Luckily, you have the Item and Character Worlds for these instances. Each character or item creates a massive dungeon to explore. These dungeons are hunderds of floors, though you are able to heal or quit after ten of them. Not only does your group get stronger by doing this, but the item or person in question benefits as well. If you don't think that kind of help is enough, you can make usage of the included downloadable content. You will need to activate this content manually as some of it can break the game’s balance. By accessing it, you will receive additional extras that increase the enjoyment factor further. There are things like new or early classes, characters from older games and even free money.

Disgaea 5 is a great looking game, no matter how you play it on the Switch. Whether in handheld mode or on TV, it looks incredibly sharp with some nice colors and nifty looking character art. This feels made to be played on the go as well. Disgaea 5 features short and concise battles that you can easily play on your commute. The music, however, is at best okay. The sound bites loop way too much for their own good and this gets irritating fast.

Disgaea 5 Complete is the first full edition of these games on a Nintendo platform. With its fun gameplay and goofy storylines, I sometimes played the game for six hours straight. The various systems offer depth as well as accessibility for anyone who dares to touch it. Still, there are things that should be addressed. The gameplay is more built around placement than actual strategy, and the music loops way beyond any acceptable margain. None of these problems break the experience overall, but I imagine that they are good to keep in mind. If you need a game to sink all of the hours into, Disgaea 5 is one of your better bets on the Switch.

so, I wanted to get this game back when it first came out, but that's around the time the BD Drive on my PS4 stopped working. I've abstained on looking up info on this game so I can play the switch version instead and be annoyed all over again at the level of RNG involved in getting the Savage World and grinding countless item worlds and... oh man, I haven't played a Disgaea game in a while, color me excited!