A shooter that’s colorful, pleasant to the ear, and extremely addictive.

Scroll down to the bottom for a video review.

Two of my favorite shooters are Sega’s Fantasy Zone and Geometry Wars: Retro Evolved 2. Graceful Explosion Machine from developer Vertex Pop, at times, feels like a wonderful combination of those games. Like Fantasy Zone, it features colorful 2D side-scrolling action with multiple weapons at your disposal to defeat the onslaught of enemies. Similar to Retro Evolved 2, the game features a well- designed score multiplier system that incentives you to keep trying for the best score possible. While Graceful Explosion Machine may or may not be directly inspired by those titles, it’s certainly a well-designed arcade shooter that will at times remind you of some of the shooter genre’s best entries. 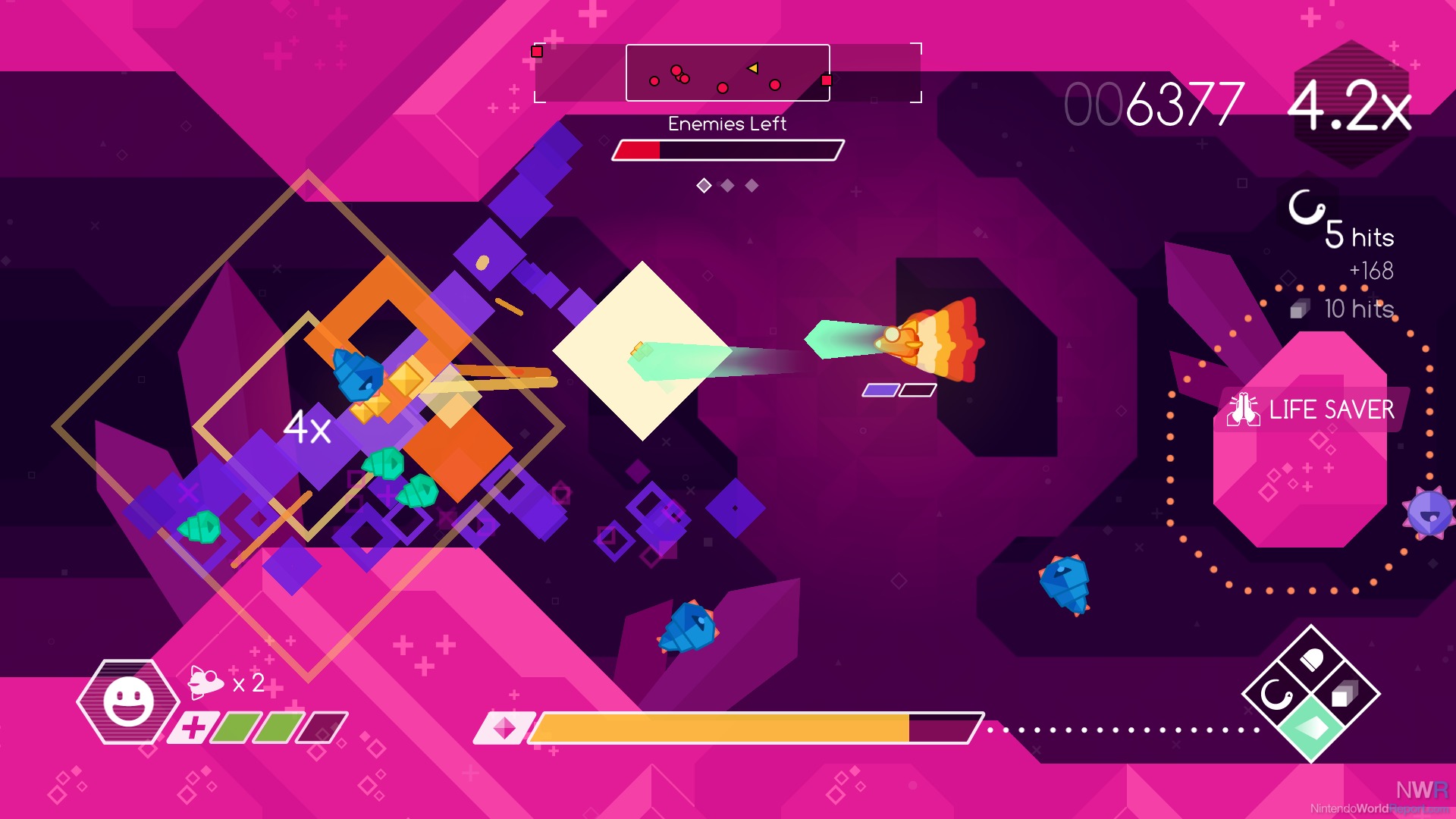 Graceful Explosion Machine starts slowly with a few tutorial stages to get you acclimated to the action. You start off by learning about the blaster, which is your classic basic laser weapon, though it overheats after too much repeated use. A great deal of the game’s strategy comes from a deft mix of blaster shots along with the other 3 weapons in your arsenal. The big difference with the other weapons is they can only be used when you have enough energy, which you collect from crystals left by defeated enemies. The weapons using energy are missiles, which will lock onto a group of enemies and obliterate them, the energy sword, which spins a destructive beam around your ship to kill nearby foes, and my favorite weapon, the sniper beam, which shoots a powerful, but narrow torrent of energy across the screen and will quickly defeat some of the toughest enemies.

Using the analog stick to move your ship around the screen feels very natural. Hitting the ZL or L button will change the direction your ship is facing. While it may seem slightly unusual to have a button for adjusting ship orientation, I feel it helps the game control closer to classic 2D shooters like Gradius or R-Type. Players also can use a dash button to quickly zoom across the screen. You can actually dash through enemies, which becomes a great escape mechanic, but you need to avoid the laser shots produced by certain enemies. It’s worth noting that the game does not support the D-pad on the Switch Pro Controller, which is a shame for a 2D shooter like this.

The game features 36 regular stages across 4 different planets. A steady difficulty curve keeps the experience fresh as you progress through later stages that not only feature stronger enemies, but also a greater quantity of them. While the levels themselves mostly follow a similar layout and look, the developers have created a number of fun little playgrounds that have you adapting your strategy to complete them. It took me approximately four hours to finish all the regular stages, but I’m going to want to replay many of them and beat my high score. Based on your score, you are graded after every stage. On the stage select screen, the game smartly invites you to improve your previous score by letting you know the score necessary to acquire the next grade. In addition to the main levels, a few challenge stages are packed with some tougher variations of the regular levels along with a score attack medley where you must complete multiple levels in succession with a limited number of lives.

Graceful Explosion Machine has a wonderful atmosphere. The combination of visuals, music, sound effects, and HD rumble do a great job of keeping you engaged. It’s a lot of fun feeling the blast of your different weapons or the shockwave created by a nearby enemy. The visuals are colorful and pleasant and while maybe not the most technically impressive, they are super clean and make it very easy to identify the barrage of enemies you encounter. It’s important to note that the game does a great job with visuals meters and sound effects letting you know when you’re running low on blaster shots or out of energy. I found myself playing better with the sound on because of help provided by the audio cues. 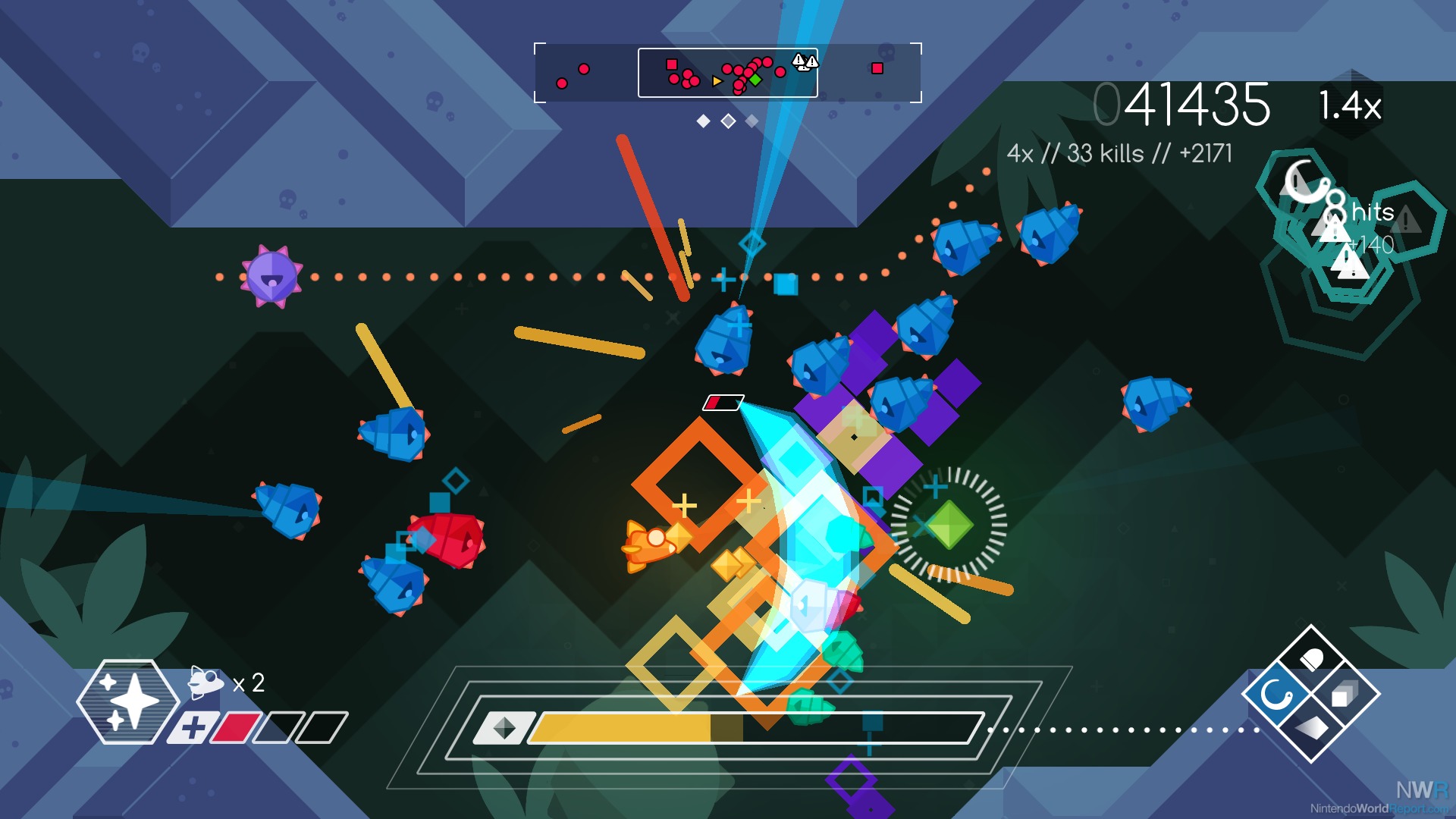 As someone who loves repeatedly going for a high score in games, Graceful Explosion Machine is extremely addictive. The key to getting a high score is to keep building your score multiplier and not letting it drop. Your multiplier will completely reset when you lose a life and also when you go too long without defeating an enemy. I found myself often restarting levels if my multiplier was reset. To be fair, if you have zero interest in chasing the highest score possible then this game may not be what you’re looking for. It would be nice if there were some additional stages or boss battles, but I can easily see myself being occupied by trying to get an S rank on every single stage.

The biggest failing is the way you upload high scores to the leaderboards. While the game will automatically save your high score for each stage locally, the only way to upload your score online is to submit it to the internet immediately after completing a level. That means you cannot upload scores you get while on the go and without internet. I’ve mostly been playing the game on the subway so it’s pretty annoying that most of my high scores can’t be uploaded to the leaderboards.

Graceful Explosion Machine is an intelligently designed 2D shooter for the Switch. The developers obviously put a lot of thought into the weapon and high score systems and made a title that you’ll want to replay over and over. The Nintendo Switch may still have a low number of retail releases, but Graceful Explosion Machine is another indie title that will keep you enthralled on both the go and at home.

I have been wanting this since I saw it in the nindies presentation. Im slightly surprised to read it is more of a traditional 2D shooter. For some reason I was assuming it would be a twin stick shooter like Geometry Wars. Im definitely still buying it though.