September 2012. While the last big Nintendo Direct before the Wii U launch wrapped up, everyone was caught off guard by one more announcement at the end. Bayonetta, the awesome action game from 2010, would be getting a Wii U-exclusive sequel. This reveal was met by happiness and sadness all at once (the latter from fans who didn’t want to buy a Nintendo console), but the excitement reigned supreme in my book. 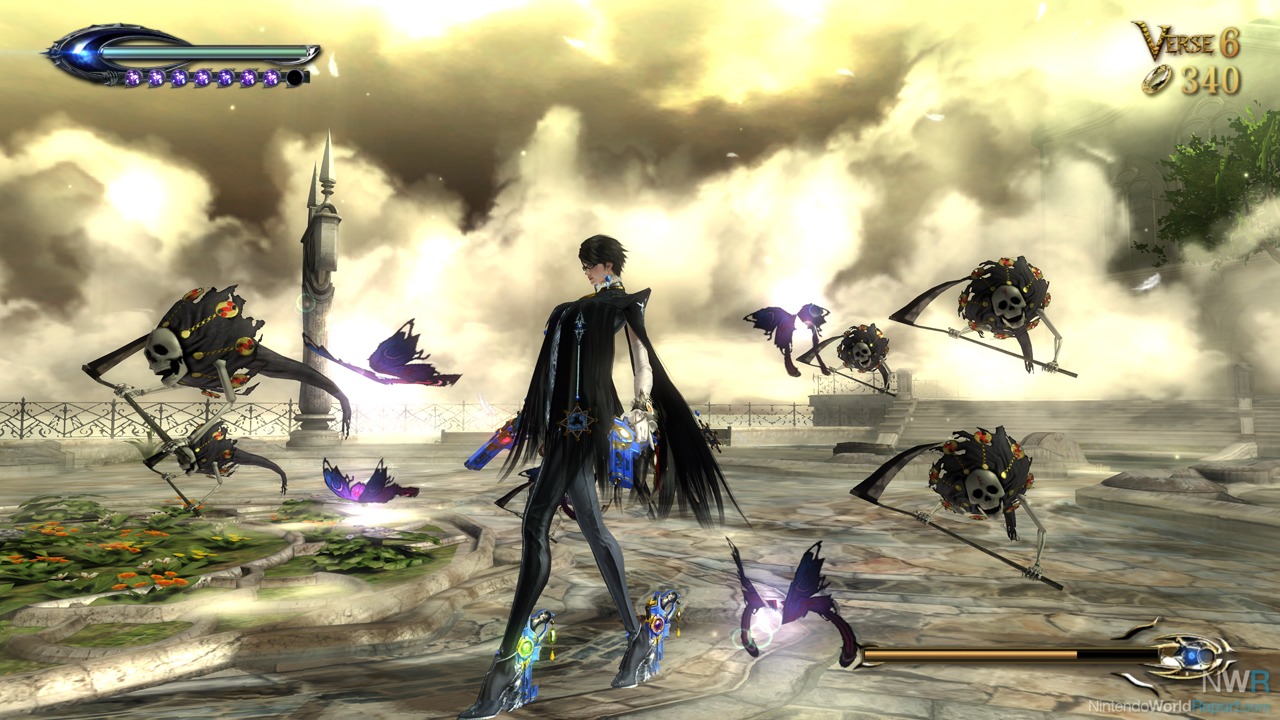 The story follows Bayonetta as she has to aid her friend, Jeanne. She has been kidnapped to Hell, and Bayonetta has 24 hours to get her out of there. A mountain close to the city, called Fimbulventr, houses gates to the various realms that Bayonetta uses to reach her final destination. Along the way, she will meet up with characters like a young boy named Loki, who seems to have the power to control time. In the beginning, they don't get along at all, but it is clear that they can help one another to complete their own goals.

If that journey sounds straightforward, don't worry. Bayonetta has to deal with a huge amount of enemies from both Paradiso (Heaven) and Inferno (Hell). They will keep pushing the witch in different directions, away from her simple path. Bayonetta deals with these foes in her own special manner and doesn’t take no for an answer. That dynamic has not changed one bit from the first game, but I do feel that Bayonetta 2 tells a deeper story. It has ridiculous moments, but the game is not as obnoxious or overly weird as the first entry. Bayonetta 2 considers the mistakes of the first title and should satisfy all action game fans.

This is also reflected in the game's combat. Bayonetta 2 feels overall like a tighter package and will instantly bring a smile to your face. There are two factors that contribute heavily to this improved feel. First are the weapons, which are endlessly fun to experiment with different weapons equipped to both your hands and feet. I suggest that you put in some effort of testing them, as the combinations give you creative ways to destroy your foes. Most of these weapons are purchased at Rodin's shop by bringing him Golden LPs, and this will require a deeper look around each level. One of the first weapons I bought and loved is the set of Rakshasa. They are swords that can be equipped to all body locations and allow you to slice and dice anyone in your path. 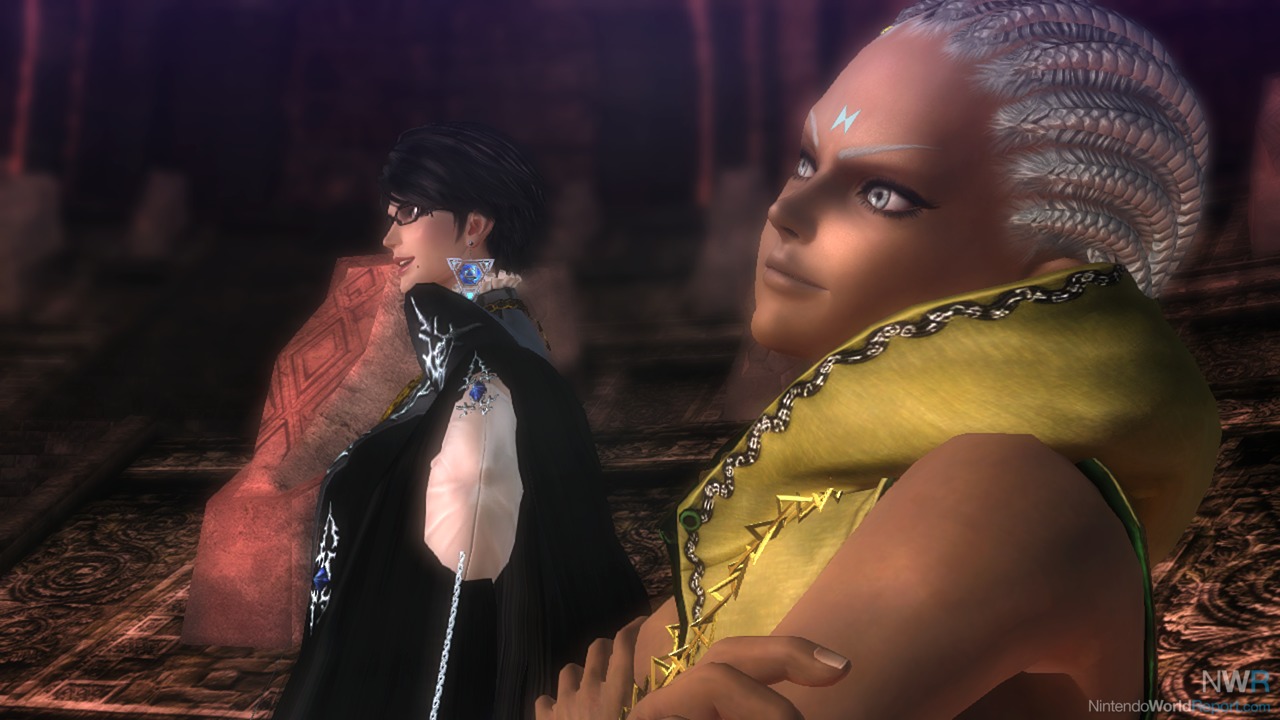 The second important aspect of the combat is the controls. Playing on either the Wii U GamePad or Pro Controller feels great. Dodging at the brink of being hit will activate Witch Time, which allows you to beat down those enemies for a couple seconds in slow-motion. There are also Umbran Climax and Infernal Demons attacks that will bring powerful creatures to the battlefield. Finding the right balance in using these abilities, in addition to the various weapons, lets you deplete enemy health bars in the best ways possible. There is a unique flow to it all that never stops being novel, and Platinum Games are true masters in that regard.

The Wii U GamePad does not do anything particular with the second screen, and it mostly mirrors what is displayed on the television. It enables you to direct enjoy some off- TV action, but in other situations, I found it slight distracting. You can use touchscreen controls with the GamePad, but this is something I wouldn't recommend at all. In theory, it might be good for beginners, but the game does a good enough job balancing all difficulty settings.

Beyond the action, you will explore environments to find lots of items, which provides a nice break from the standard proceedings. Aside from the previously mentioned Golden LPs, there are also Umbran Crows that unlock Miiverse stamps. There are also special Muspelheim challenges, in which you eliminate enemies in a rather strategic fashion. Sometimes this means only dealing damage during Witch Time, while another kind of challenge gives you a strict time limit. 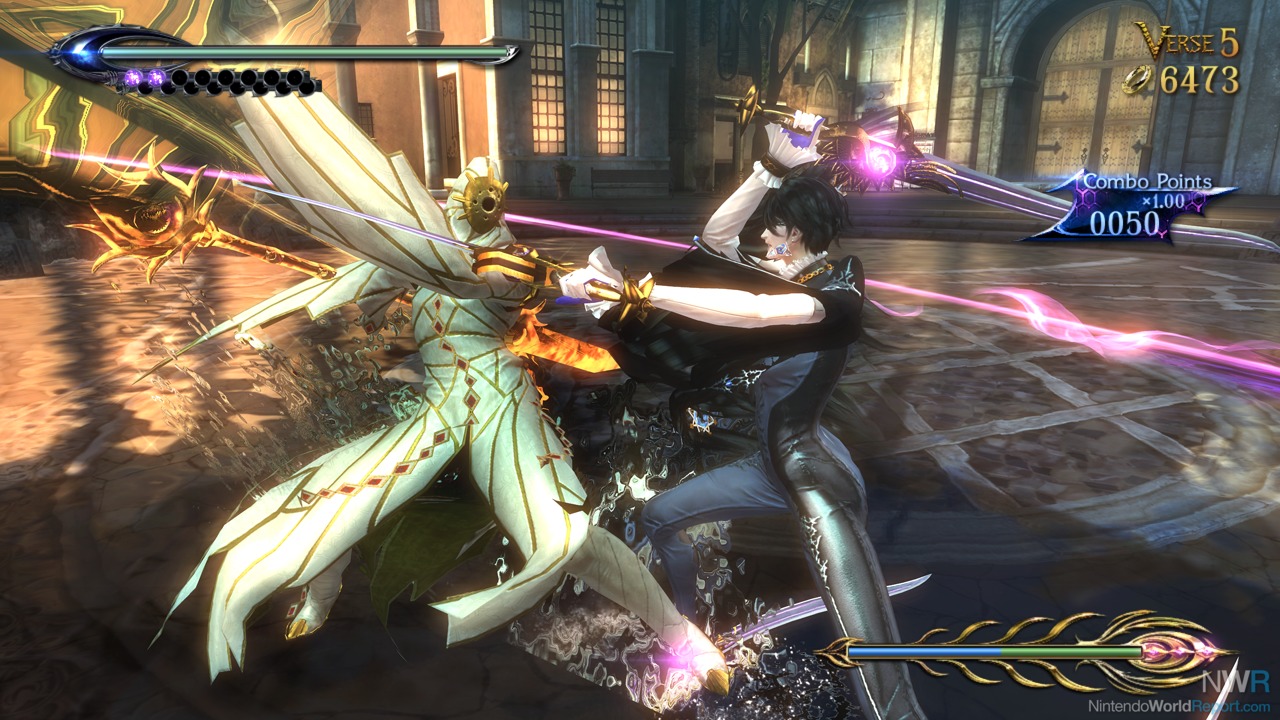 Various challenges also appear in Bayonetta 2's online mode, which is called Tag Climax. It is a unique mix of co-op and competitive play that puts your skills to the test. Each character works together to defeat hordes of enemies while also striving to get the most points. Every match consists of six missions, and more are unlocked throughout the game. It is a lot of fun, but sadly, this mode can't be played locally with a friend. You can play it online or against the computer though, so you will still get a ton of mileage out of it.

Bayonetta 2 looks lovely on the Wii U, though mostly when you are moving about through the world. If you stand still, the game is slightly fuzzy, though that effect is hard to notice. It is minor gripe in an experience that has beautiful art direction and brings the European architecture to the forefront. Add to that a glorious soundtrack, which has a brilliant remixed version of the classic “Moon River” song.

Bayonetta 2 is one of the best games to ever grace the Wii U. The sequel feels tighter, less obnoxious, and is a blast to play through. While the Wii U GamePad is not used in any significant way, and Tag Climax could have benefited from local co-op, this is the action-packed Bayonetta follow–up that I wanted. Fans of Platinum's outings owe it to themselves to check it out and start exploring the many twists and turns along the journey.

I had a lot of fun with the demo, and I'll absolutely check out the final product not only to show support but because it gives me the same rush a Panzer Dragoon or Metal Slug does.  A fine quality to have, indeed.


On the touch controls, while I wouldn't recommend it exclusively I do think choosing it at the menu is a good idea.  Why?  Because that control scheme also allows the player to switch instantly to button controls.  There's certain quick-time moments where touching felt intuitive, so being able to fluidly switch to it and then right back to the comfort of button clicks is a great plus.

Wow, when those are two non-issues are the "cons," there is no reason not to buy this game.

Wow, when those are two non-issues are the "cons," there is no reason not to buy this game.

I was curious to see what the cons were because of that post and saw this: "Wii U GamePad not used to its full extend". Pretty sure you meant extant there.